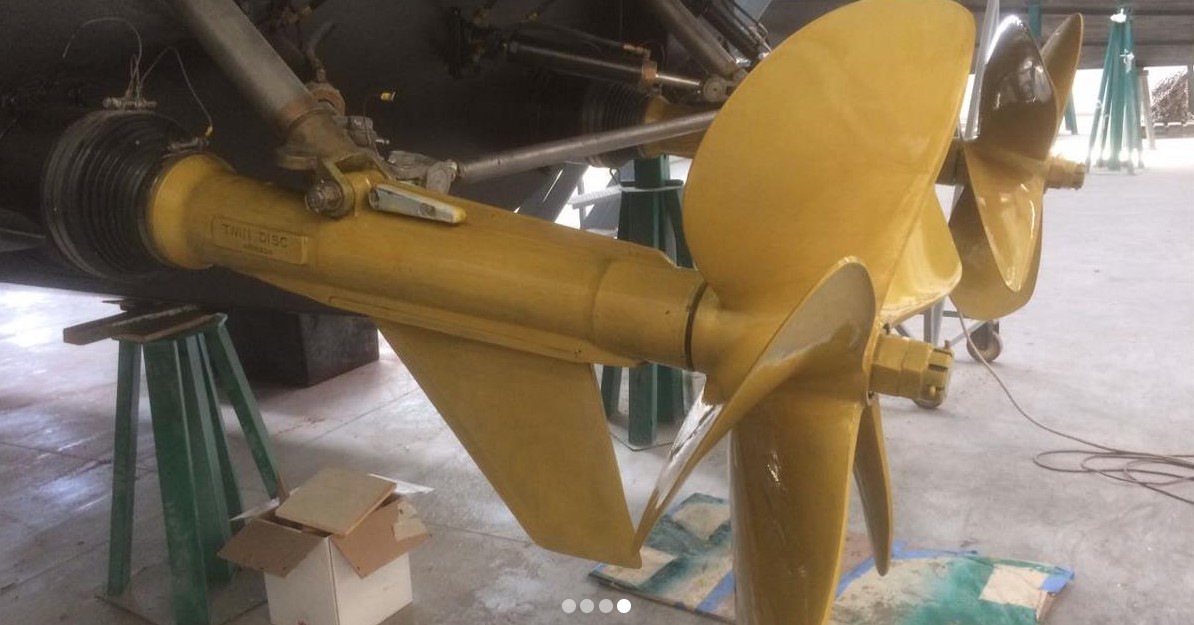 Arneson drives coated with Propspeed are shown above. These surface-piercing props spend more of their life nearer sunlight, which encourages slime growth and more fouling than normal props, so keeping them clean is even more important. 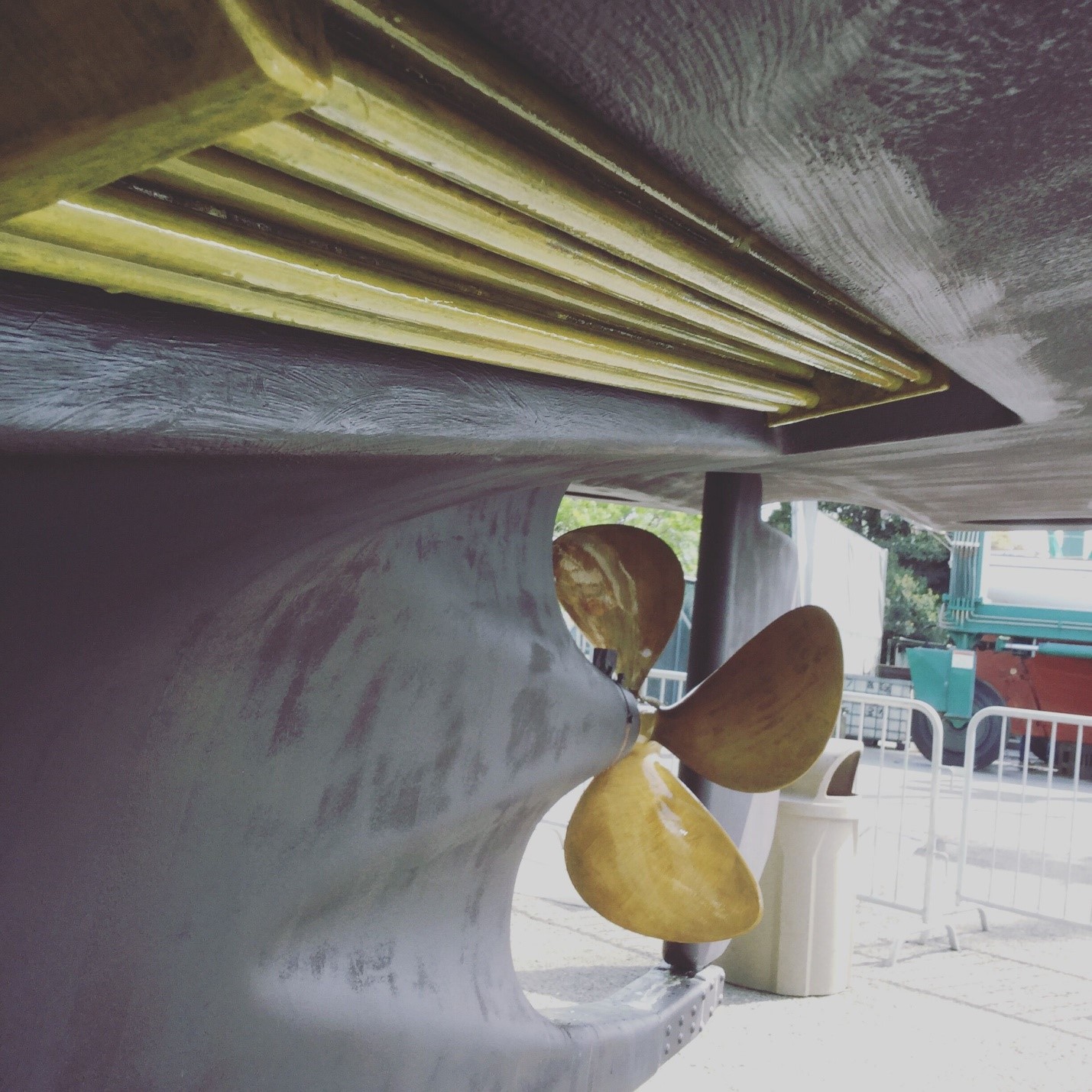 For fast moving vessels with frequent use, the Propspeed coating on these keel coolers at the top of the picture is the right choice.

Propspeed is a foul-release coating, not an anti-foulant, so it doesn’t harm marine life. The topcoat on the Propspeed system is an ultra-slick surface that marine growth finds difficult to hang on to. Propspeed’s effectiveness does depend on movement of the boat - the more one uses it, the better Propspeed performs.

Proven Results. BoatTEST has gotten reports for years that it works. As with any scientific breakthrough, there are those who exaggerate the magnitude of the impact. And so, we decided to do our own tests, the BoatTEST - Propspeed Challenge, that will take approximately 9 months to complete. While we are waiting on our independent test results, here’s what we’ve learned. 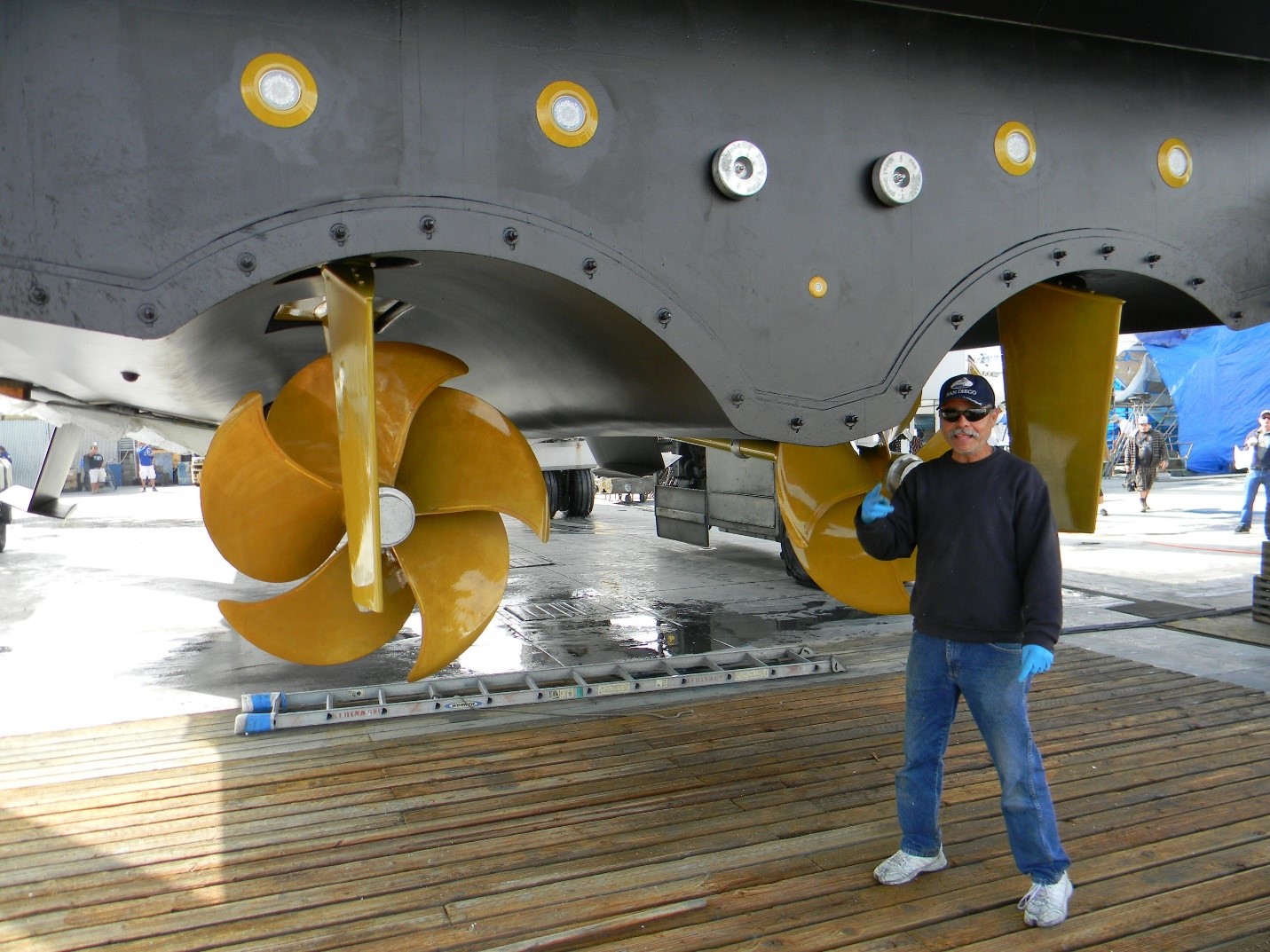 The running gear and underwater light bezels of this vessel get the gold treatment.  The gold color comes from Propspeed’s zinc chromate primer layer. Oceanmax, the maker of Propspeed, also makes a clearcoat for underwater light lenses called Lightspeed, formulated for the higher temperature of the lights.

- Reduces marine growth on metal below the waterline

Propspeed was developed by Guy Jacobsen, a sportfish enthusiast from New Zealand who happened to own a paint company and sought a solution to keep the running gear on his boat clean. – Boat Owners Warehouse

Oceanmax, the maker of Propspeed, is dedicated to discovering and developing high performance products that make marine craft more efficient to run and economical to maintain.

- Reduces marine growth on metal below the waterline 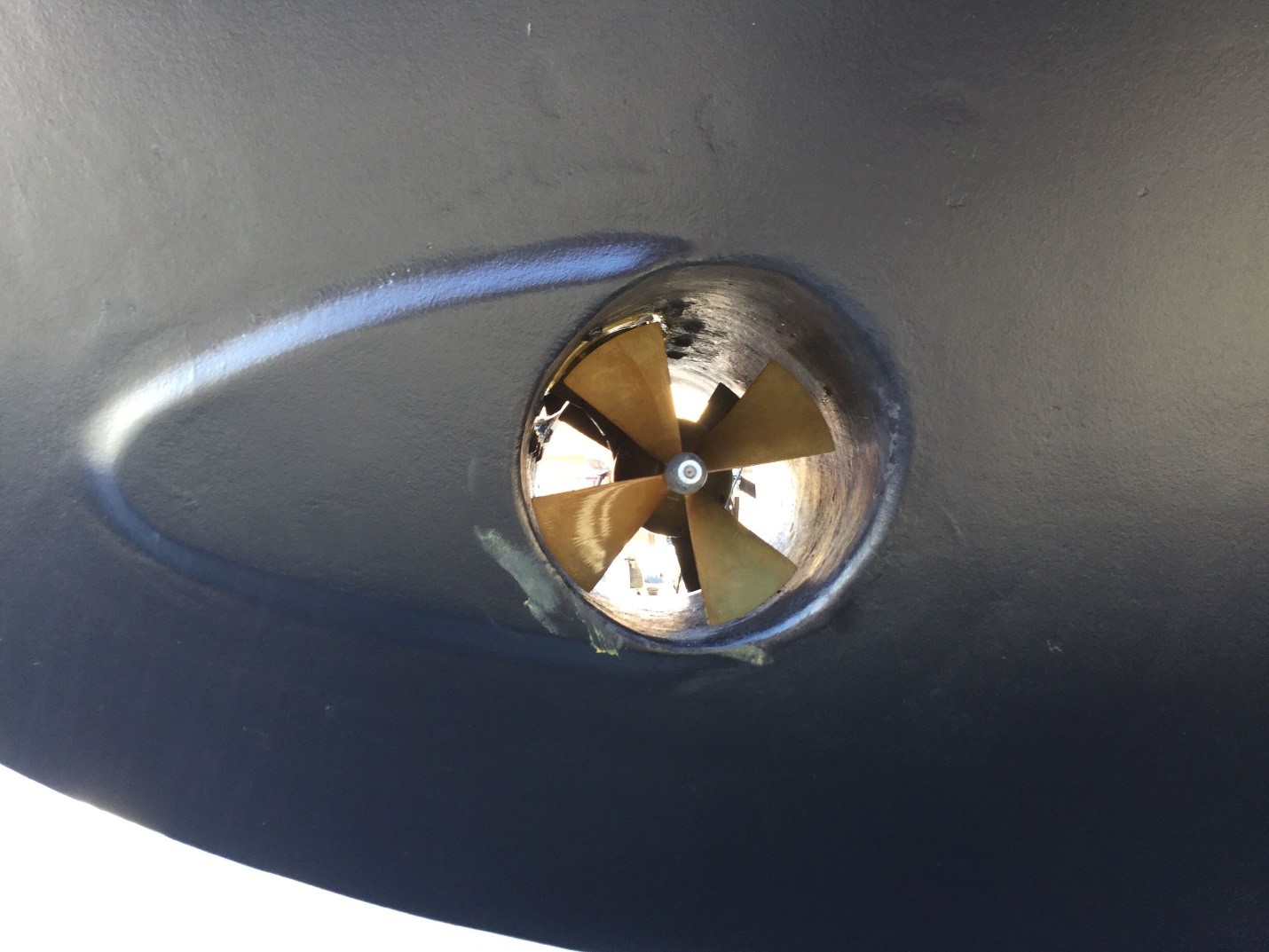 Propspeed, consists of the yellow-pigmented, two-part etching primer that chemically bonds to metal and provides a chemical and mechanical bond for the final component, the clear topcoat.

The outer clear coat is silicone-based. Proper cleaning and surface prep with Propprep are essential before the yellow etching primer can chemically bond to the metal and provide both a mechanical and chemical bond for the slippery topcoat.

Propspeed sets itself apart from the competition with the exceptionally strong chemical and physical bond between the metal substrate, the primer and the topcoat - this ensures that the Propspeed coating actually stays on your running gear. 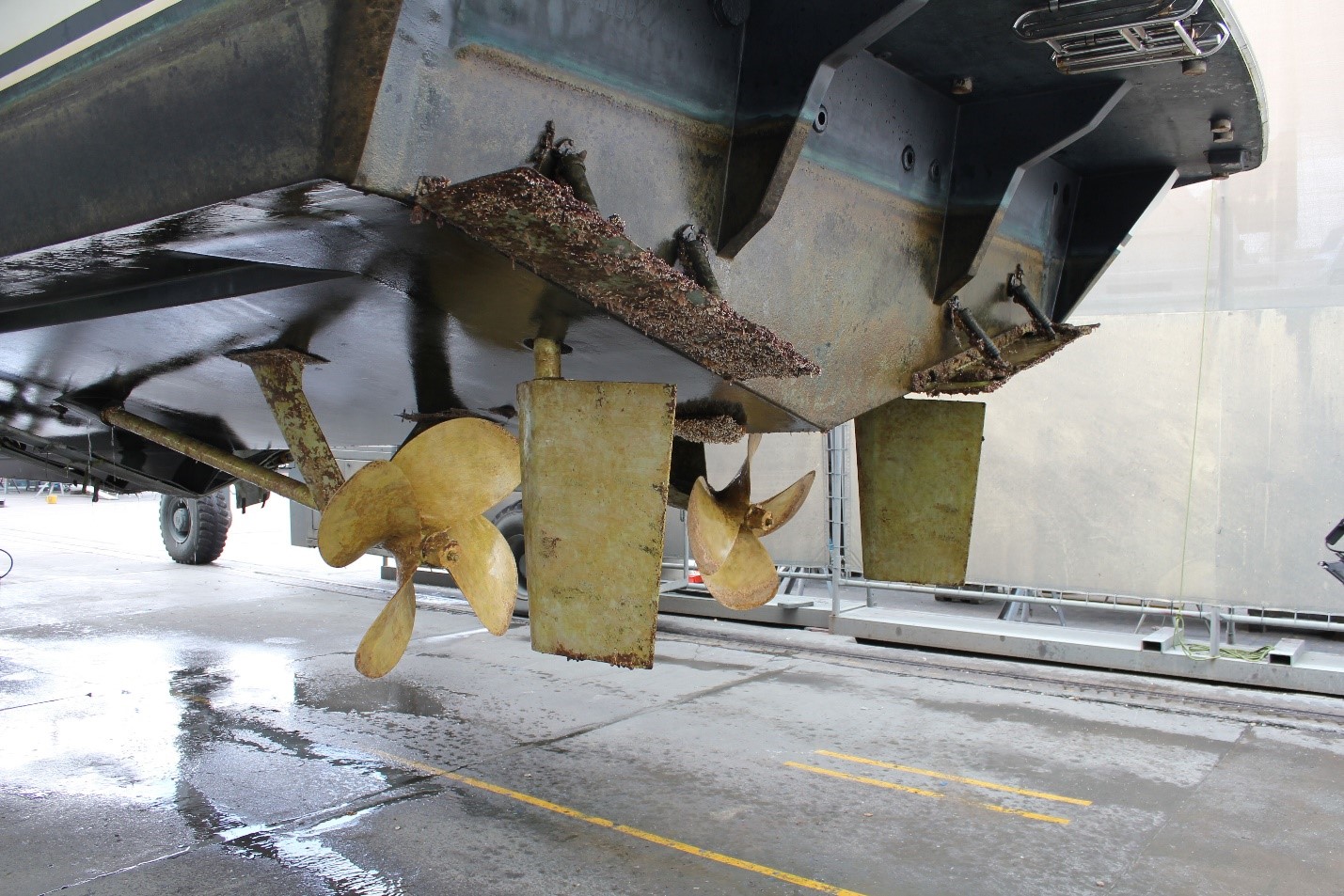 Why aren’t all the metal surfaces below the waterline candidates for Propspeed?  See the next picture.

Our preliminary research shows there are lots of variables as to how effective the Propspeed coating is, starting with proper application, temperature, frequency of boat movement/speed, and maintaining a clean surface without scratches that disrupts the clear coat - i.e. don’t let a diver use anything more aggressive than a soft cloth to wipe the props and expect the coating to stay intact. 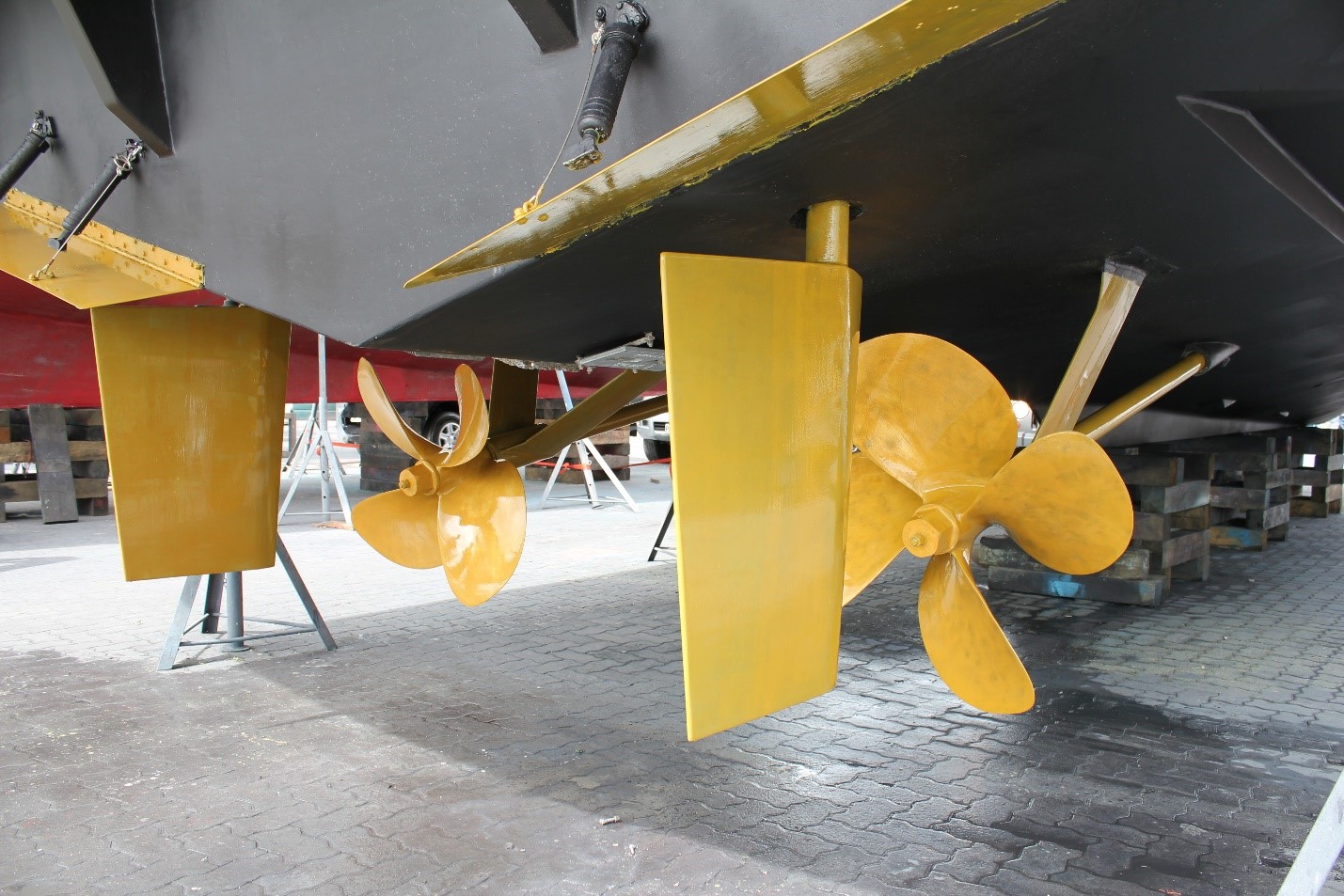 The boat above, now coated with Propspeed, shows a range of metals below the waterline that are candidates for the self-cleansing flow of water upon which Propspeed depends - marine life simply can’t hang on.

Vessels being hauled for extended time on the hard does not affect Propspeed. Conversely, anti-fouling paint loses effectiveness with exposure.

Why not use anti-fouling paint on everything? Well, first it is toxic to marine life with long term impact on humans and second, anti-fouling paints are designed to slough off so new toxins are constantly released. This might work for hulls moving slowly through the water, but on high speed props, paint simply burns off - so Propspeed is the answer. On other underwater metals like skegs and rudders, the decision between coating with Propspeed versus anti-fouling paint should be based on the boater’s cycle of use. 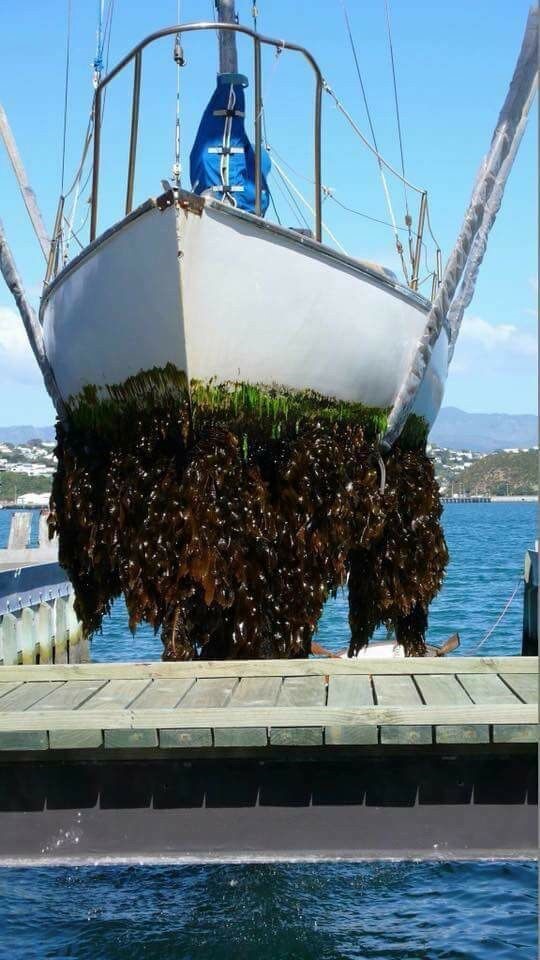 The cycle of use on this boat is not sufficient to sustain a clean bottom with Propspeed or any other coating for that matter.

A rule of thumb should be that if one is not getting four to five hours of runtime every three weeks in a warm climate like Florida, that is prone to excessive marine growth, then maybe you are better off with anti-fouling paint on other underwater gear, or one should employ a diver to help maintain the bottom. Propspeed is certainly easier for a diver to clean than a painted surface. Propspeed was designed for props and shafts and it seems to work on other underwater metals provided the cycle of use fits an active profile.

A physical solution to prevent marine growth does seem to be superior to a toxic paint solution, but again there are a lot of variables and tradeoffs in maintenance and costs. 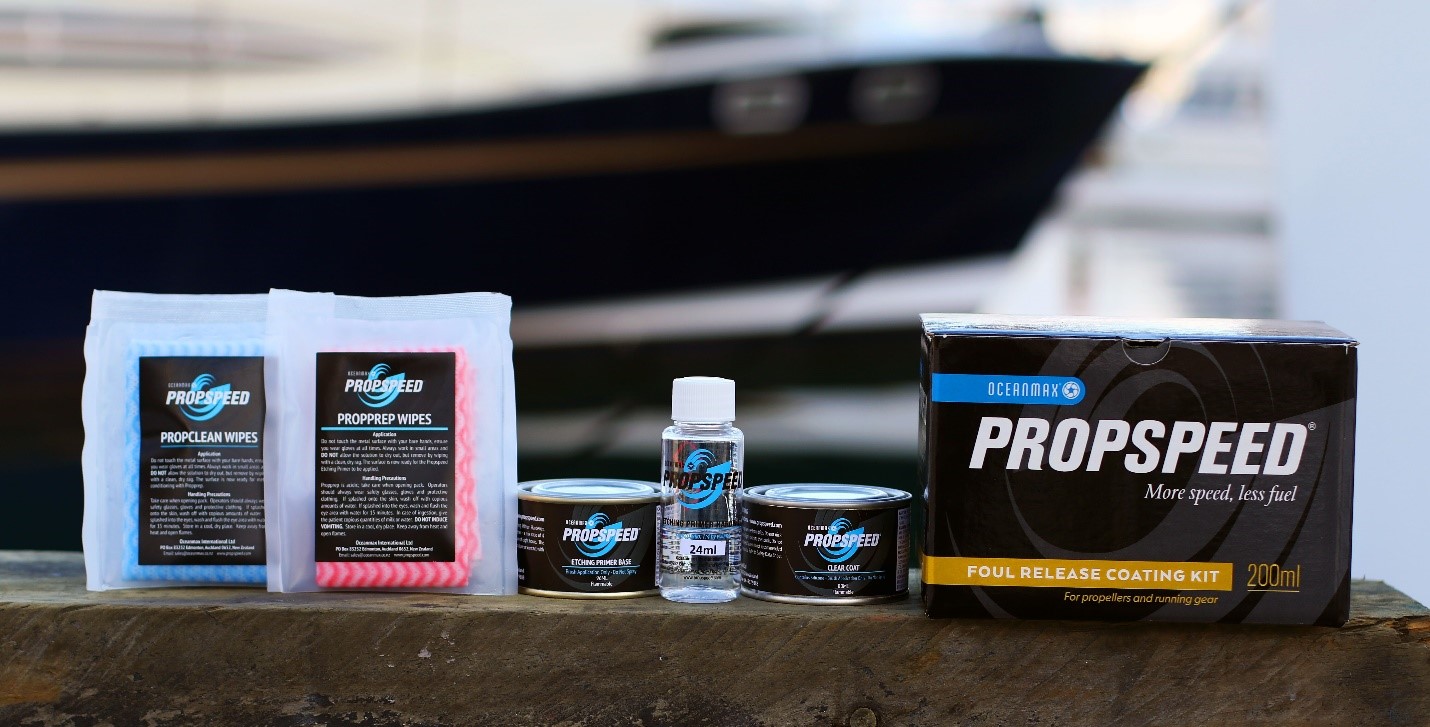 DIY boaters might choose to purchase the smaller 200 ml Propspeed kit. Check the coverage chart as it is important to have the right amount of product at hand before starting.

Propspeed is initially more costly than toxic anti-fouling paints, but long term more cost-effective, as it is said to last an average of one to two years and positively affects fuel consumption (we’ll report on this with our challenge report). It also increases sacrificial anode life.

The longevity before recoating is a cost consideration and is, again, dependent on location, temperature, and use. We have heard reports out of Massachusetts that say an active sportfish got four years out of an application while boaters in Florida might expect 18 months. 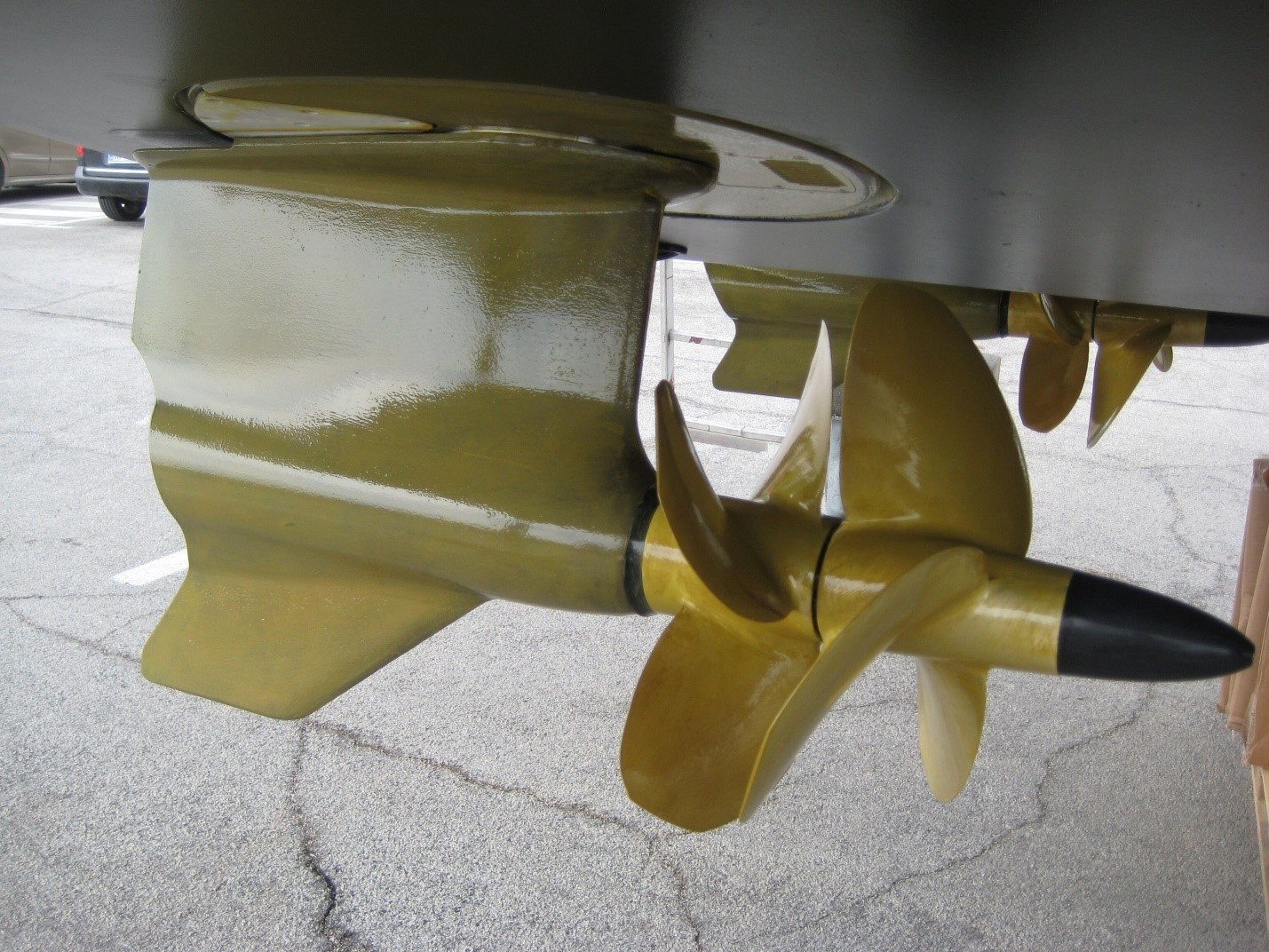 These Propspeed-coated IPS drives will wash themselves clean with regular use.

Propspeed, due to cost, is best applied by an experienced professional, because simply put, you can’t afford to mess up and redo the application. But for a DIY individual who can follow detailed instructions, it is really not rocket science to apply.

The key to application is both mechanical bonding (sanding) and the use of Propprep (a phosphoric acid with additives) that leaves a surface matrix residue for the zinc chromate polymer etch primer to chemically bond to the metal substrate. Hydrogen gas released by this process ensures that the clear coat actually penetrates and chemically adheres to the primer layer as well, and doesn’t just sit on top. All three layers add corrosion resistance. There is a little more science involved but rest assured, it all works toward a stronger bond and results in a slippery surface easily washed by hydrodynamic pressure.