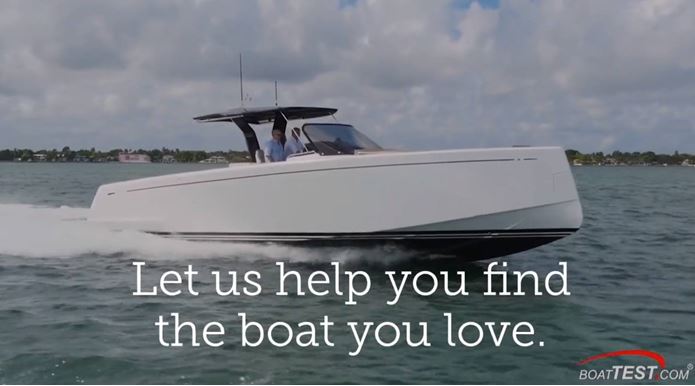 As BoatTEST approaches its 20th year reviewing boats with professional captains with videos and in-depth reports, it's time for some reflection.

With 3,000 boats tested in nearly 20 years, BoatTEST has become perhaps the most copied website in the marine industry with people making boating review videos all over the world. Some of them even call themselves “boat test” and sign off with “See you on the water.” It is true that imitation is the most sincere form of flattery, but the copycats have never quite learned the formula for BoatTEST’s secret sauce. In a massive survey of our readers last year, BoatTEST was voted “most influential” by 88% of our readers, builder websites ranked 53%, and boating magazines ranked 28%. But, that’s only part of the story. 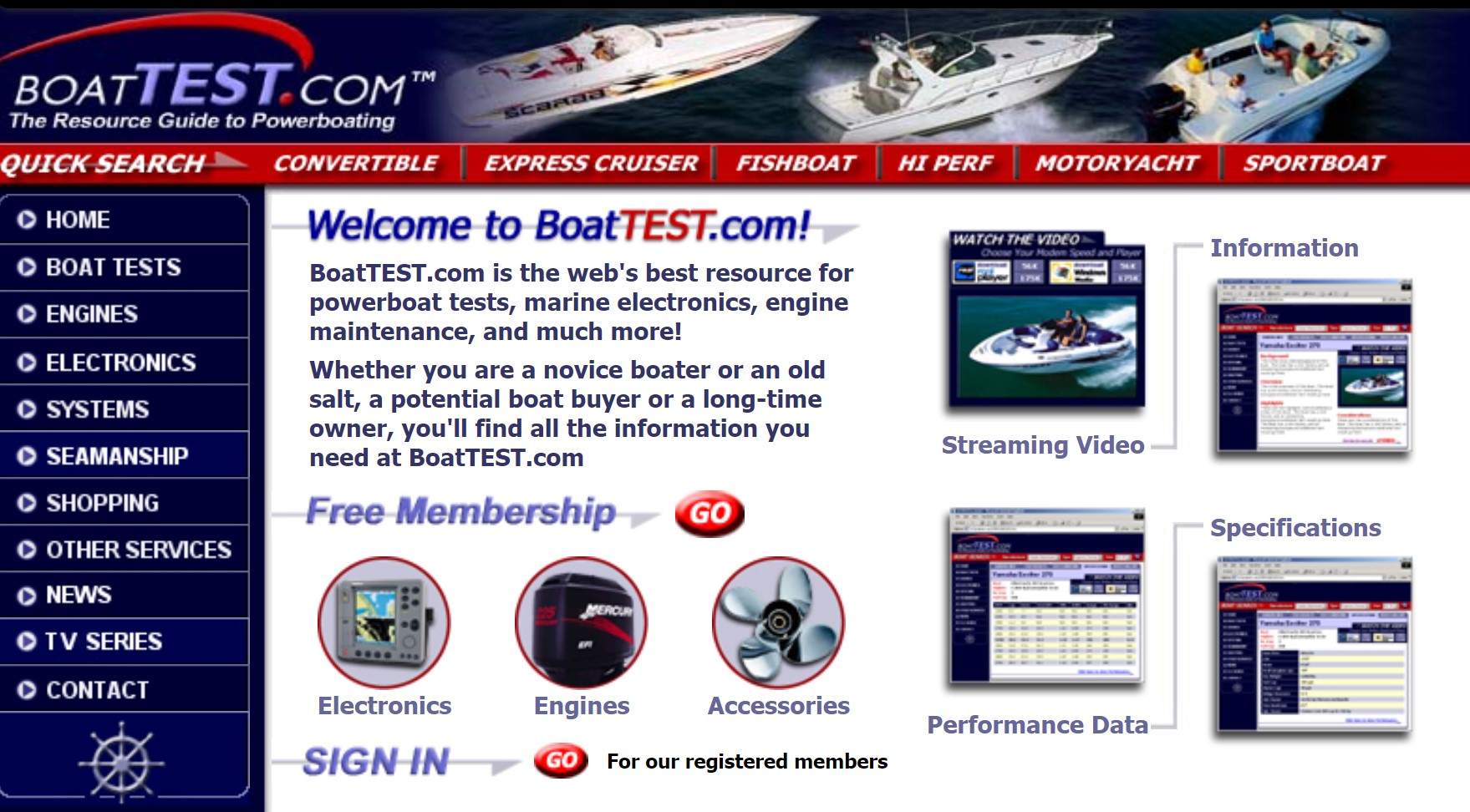 BoatTEST.com LLC was founded in the fall of 1999 for the express purpose of helping consumers research new boats on the market so that they could sort out the best boat suited to their needs and desires. It went live on September 15, 2000, with 100 video reviews and Captain’s Reports.

The founders were Capt. Chris Kelly, who produced a TV series on Speedvision cable TV called Sea Trials, as well as starting a school to educate people to get their captain’s license. Co-founder Jeff Hammond created Power & Motoryacht magazine, was a former publisher of Boating Magazine, editor of Motor Boating & Sailing, and Ocean Racing editor for Yachting Magazine, among other things. Hammond envisioned an on-demand boat-buying research website that would play to the strengths of the Internet. 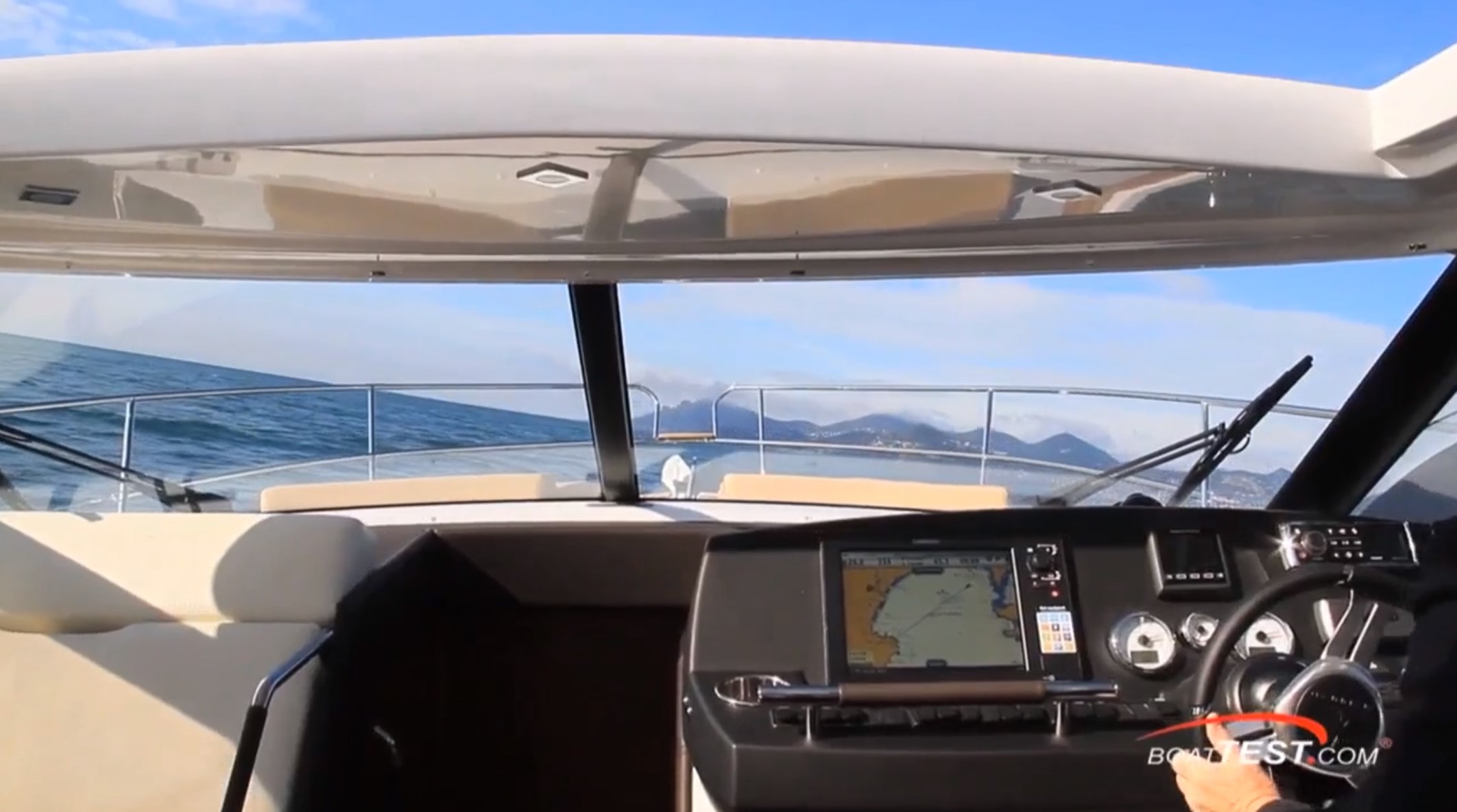 Our videographers ride along with the testing captains to give BoatTEST viewers an onboard feel for a boat they might consider buying.

The First to Stream Marine Video

BoatTEST was the first website in the marine industry worldwide to stream video – and that was back in the days of “dial-up” with minimal bandwidth. BoatTEST delivered its video in four different packages from 12 kbs to 32 kbs. Clearly, it was ahead of the curve, but the founders knew that to be a leader in boat research, they had to be ahead of the technology and the game.

What BoatTEST realized immediately was that consumers were watching the dial-up videos on weekends and at night at home, but during the weekday they were using the broadband access at work for higher-quality streaming. The result was that it had almost an immediate impact and influence among people trying to find out more about the very expensive boats they wanted to buy. 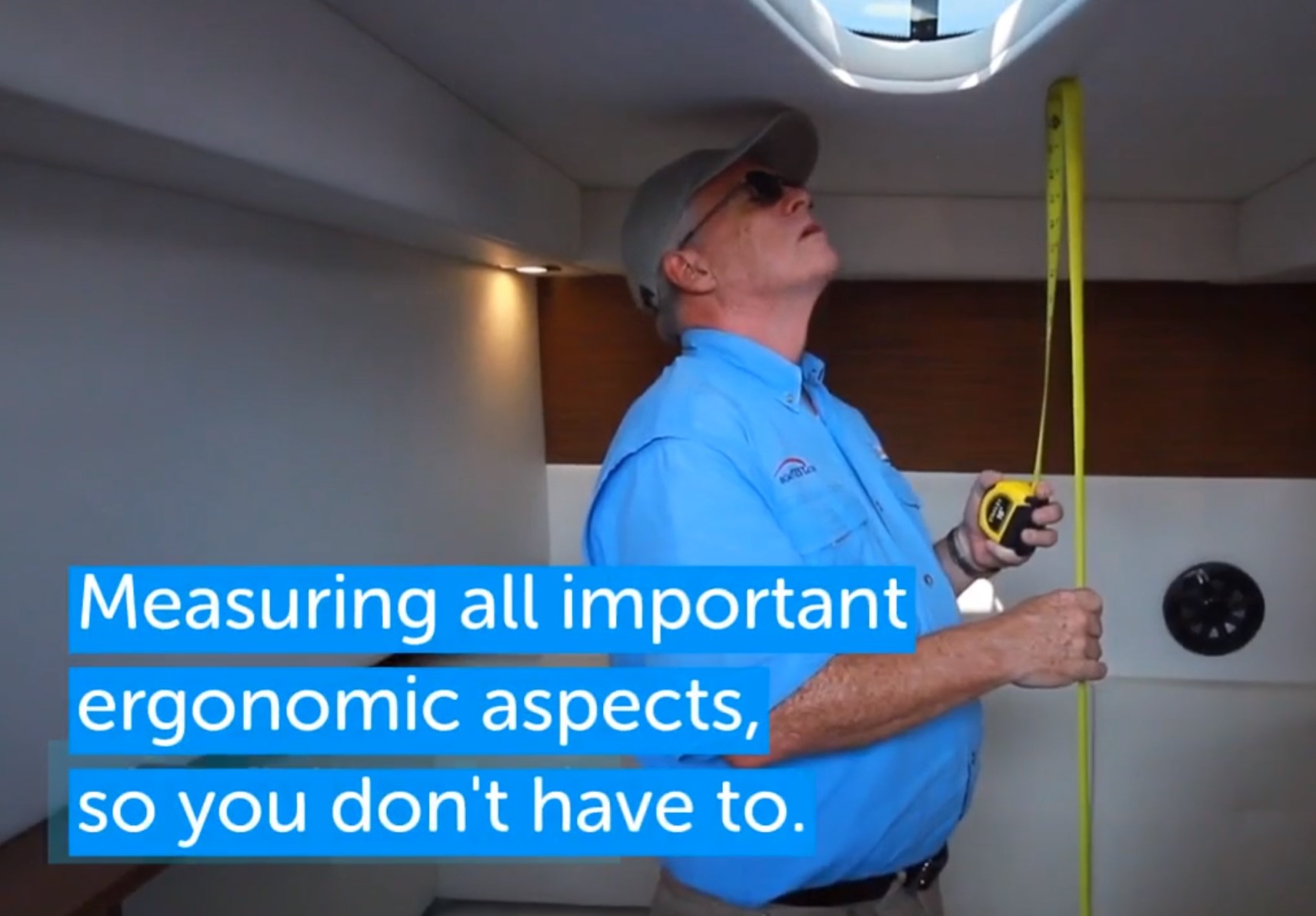 BoatTEST takes dozens of measurements of each boat tested to be able to report on their ergonomics and functionality objectively.

A New Way to Research Products

Right from the beginning, BoatTEST created a new way for consumers to research the most expensive and complex products that most people would ever buy, after their home. BoatTEST combined the skills of a video production company with an independent testing facility, as well as an online reference library of text content and videos, and a newsletter to its members. In one stroke it combined multi-media channels—

Not only was BoatTEST a pioneering media on the Internet – which at the time many people thought was a flash in the pan, or would only be used by the rich, or the poor, or just used for email – it was also a pioneer in streaming video and Internet product content distribution. While other websites discovered e-commerce and published pictures of girls in bikinis for high traffic numbers, BoatTEST stuck with its core mission – providing solid information about boats so that consumers could make educated decisions. 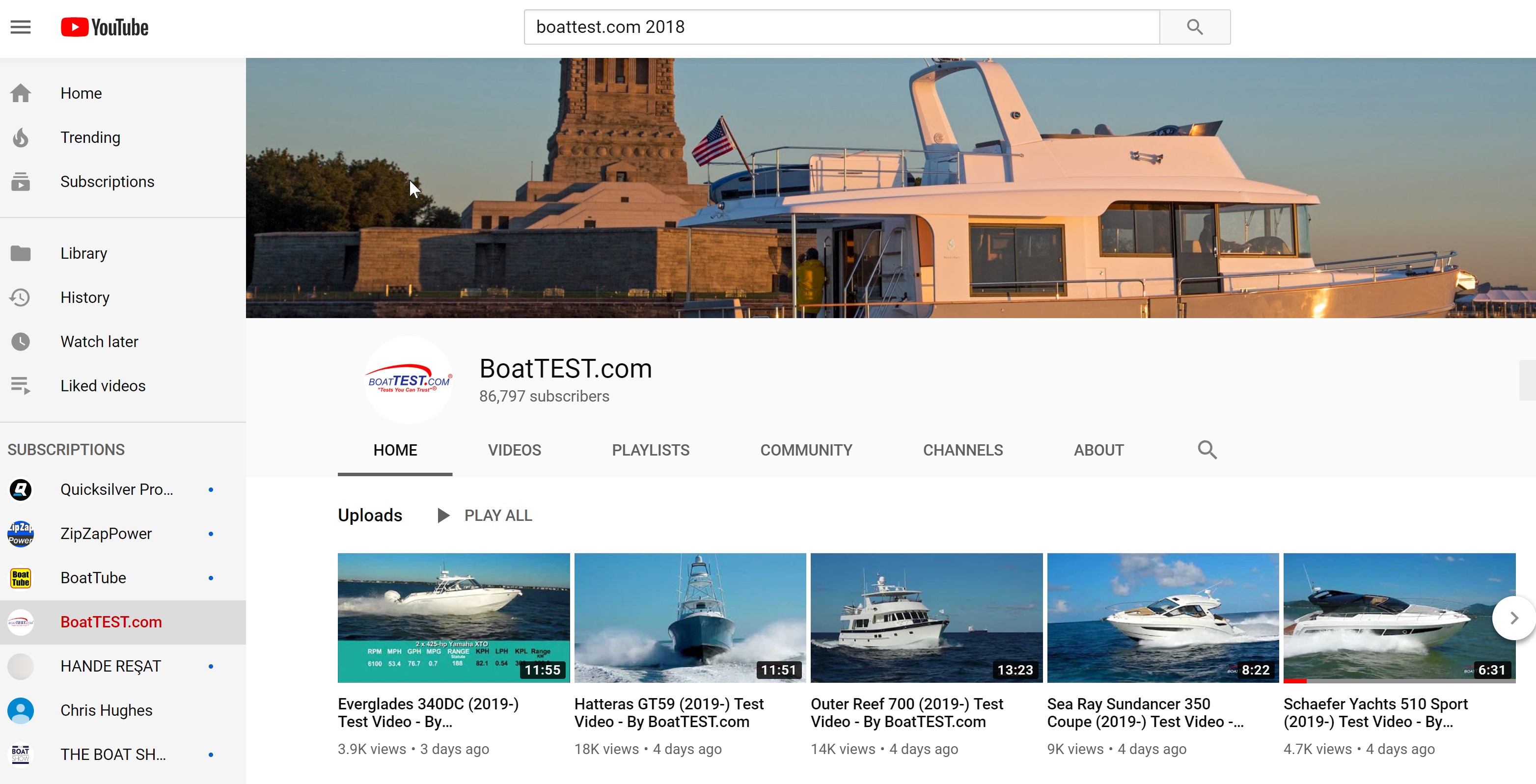 Since the inception of YouTube in 2006, BoatTEST videos have been watched nearly 59 million times.

YouTube did not go live until 2006, and by that time, about 50% of the U.S. households had broadband. Immediately, BoatTEST put all of its videos on this new, worldwide outlet and doubled the number of people watching its videos.

It was not until then that the marine industry began to understand the power of streaming videos to capture the attention of consumers.

BoatTEST’s test numbers are the gold standard in the marine industry.

Because Capt. Kelly had been around boats all of his life, owned a Sea Ray 26, and had a young family that he took boating on Long Island Sound and out to the islands, he knew first-hand what boat buyers needed to know before buying a new boat.

Hammond had grown up fishing with his father on large lakes for walleye and pike in Ontario, Canada in a 16’ home-made plywood boat with a 25-hp Evinrude outboard. As a teenager, he was introduced to waterskiing behind both wood and aluminum sportboats on lakes in northern Indiana. In high school, he began sailing on Thistles, and later, on a Laser in Annapolis. Over the years he owned everything from a 19’ dual console Grady-White, to a 26’ and then a 30’ Pearson sailboat, to a 55’ Hatteras convertible, and eventually, he built a 92’ Hargrave motoryacht. 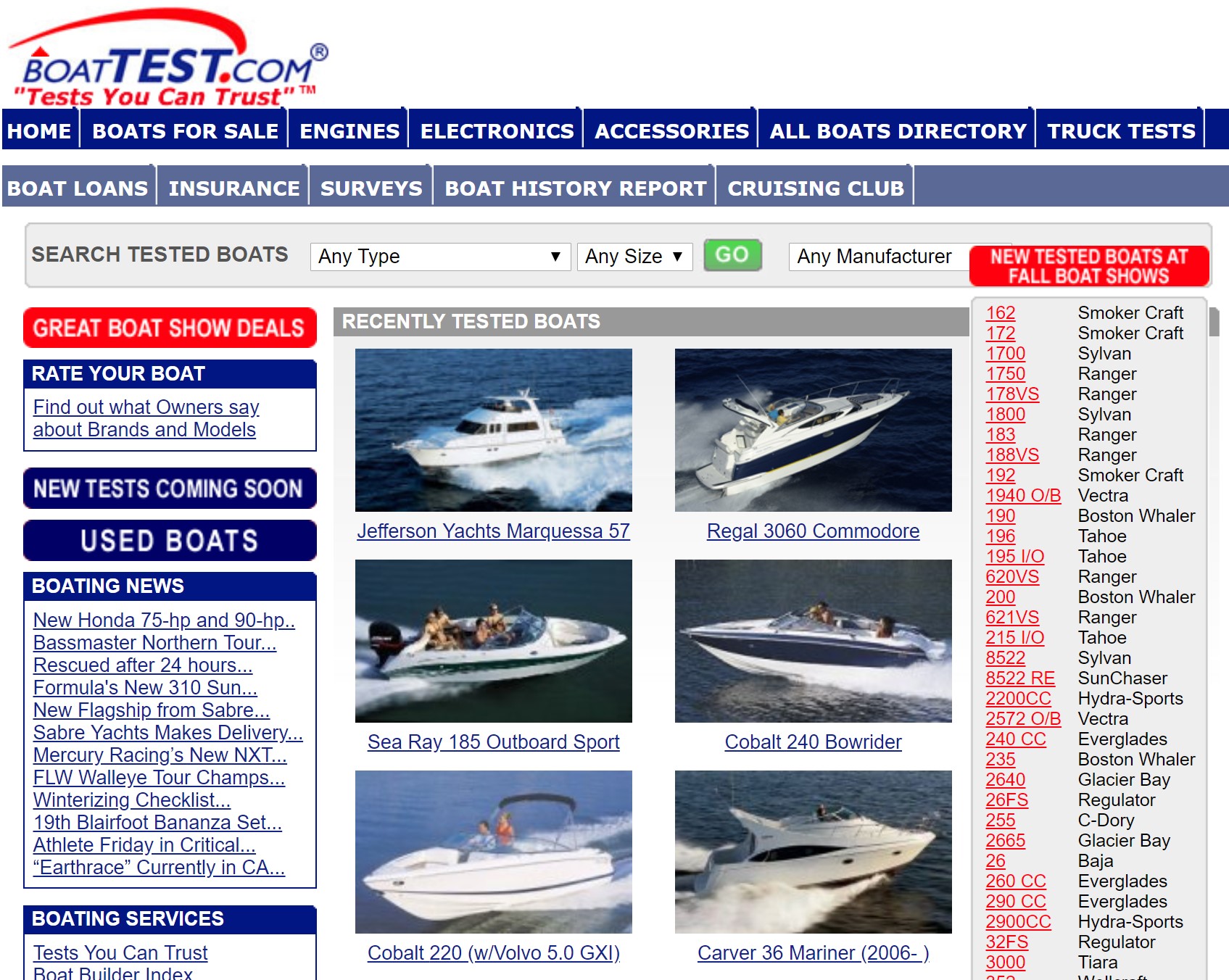 In 2006, BoatTEST’s home page was a three-ring circus of news, reviews, videos and just about everything else in boating. Everyone on the Internet was finding their way in this new medium, and eventually, BoatTEST simplified its home page.

After 20 years and 3,000 tests, BoatTEST still has the same reason for being as when it was founded. Its culture of “consumer-first” has been widely recognized among the boating public.

In a survey of its members in 2018, 88% said that BoatTEST was the “most influential resource” for their new boat buying decisions, followed by boat builder websites at 53%, and 28% for boating magazines. Social media ranked about the same as magazine ads at 17%. (The study had a 5% +/- margin of error.)

Founder Jeff Hammond has owned boats from 15” to 92’, both power and sail, and brings a consumer point of view to everything BoatTEST publishes.

Director of Testing, Capt. Steve Larivee celebrated his 10th year of testing for BoatTEST in 2018. He has probably tested more boats than any man alive and has certainly made more videos. As Director of Testing, he has a rugged travel schedule flying around the globe to test boats for our clients. His iconic sign-off, “We’ll see you on the water” has been widely copied.

Behind every video and captain’s report that we publish are nearly a dozen BoatTEST team members who keep the wheels turning. At the head of the list are the videographers and editors that keep the videos flowing – nearly 300 videos a year, 125 Captain’s Reports, and over 300 daily newsletters with over 1,500 separate items.

Kurt Rotter is our lead videographer and he has worked for BoatTEST right from the beginning, as has Dan Carney, who started out as our only editor and now wears two hats as both videographer and video editor.

We count ourselves as lucky to have Steve Sylvia as our chief editor and we share his time with several broadcast TV clients. For decades, Frank Sargeant has edited fishing magazines of all sorts, both freshwater, and saltwater, in addition to writing a popular book, titled Boating for Dummies. He almost single-handedly writes our daily newsletter that goes to 185,000 subscribers.

Georgiann Coloccia schedules all of the tests and assigns the captains and videographers, in addition to three or four other hats she wears at BoatTEST, where a small, dedicated team of people produce volumes of content.

The future will bring new technology and evolution for boats as they morph into new shapes and sizes to adapt to the changing needs of the boating public. BoatTEST will be there to chronical it all with “Tests You Can Trust.”®