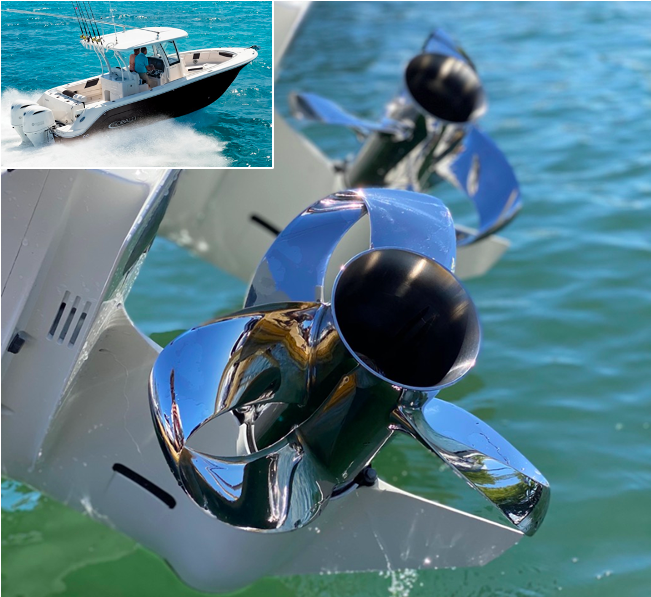 We asked founder and CEO Greg Sharrow if there was any particular reason why data on his props with a pitch greater than 15” had not been released before. His answer was, “No, we make props with a pitch from 11” to 25” (27.94 cm to 63.5 cm) for 150-hp to 450-hp outboard engines. By coincidence the three boats that BoatTEST just happened to test had props of 15” or less.”

Typically, all outboard manufacturers prop their general use engines with units between 17” (43.18 cm) and 19” (48.26 cm) for most applications — unless their boats are heavy or the builder calls for high WOT speed. The 19” props are generally considered to be at the top of the sweet spot for a large number of boats as they are a fair compromise among the three major prop performance parameters of hole shot, fuel economy and top speed.

Center Consoles are Next

“This is the first time we have ever released data on a center console,” said Sharrow.  “Until now, the only performance data made public has been on a small bowrider and on medium-sized and on large, heavy cats.”

For the last three years, Sharrow Marine has been testing its props on center consoles with a wide range of competitive props. It held off independent third-party testing and the resulting publicity, simply because it would have been unable to produce enough props to satisfy the demand, according to Sharrow.

Last year, more than 38,000 new center consoles were sold, making them the most popular fiberglass boats on the market. There are well over 50 companies building this category of boat, which means there is a lot of competition for customers.

“The manufacturing process for our props is a long and expensive process,” said Greg Sharrow.  “After the prop is designed by our CAD engineers, the wax used to make the mold must be 3D printed. This is actually the most time-consuming aspect of the whole prop-making process.”

In previous reports, we have explained how molten stainless steel is poured into sand molds, with the resulting product then being finished with $500,000 5-axis routers.  These machines sculpt each Sharrow prop to a tolerance of .003” — a specification unheard of in the conventional prop-making industry.

Another bottleneck in the production process was the lack of foundry capacity.

“We searched all over North America and even looked in the Far East for foundries that had both the capacity and the technical expertise to cast our complicated props,” said Sharrow.  “The development that made it possible for us to finally tackle the huge center console market was the opening of Yamaha’s state-of-the-art robotic prop casting foundry in Greenfield, Indiana.”

Several months ago, Yamaha Motors and Sharrow Marine entered into a partnership to both cast and sell the Sharrow Propeller™ as a new option to more than 100 of the world’s leading boat builders and its network of more than 2,000 dealers.

Sharrow Marine has released the following performance numbers for its test of a Robalo R302 powered by twin 300-hp Yamaha outboards.  The company’s captains conducted the tests and recorded the data presented here.

The performance data published below is not that of BoatTEST and we cannot independently confirm its accuracy. However, BoatTEST will be testing the Robalo R302 in early September and we will issue a full report of its findings.

Having made that disclaimer, we can also say that we are thoroughly familiar with Sharrow Marine’s testing procedure, which we deem to be the best in the industry. Typically, Sharrow techs hook up Maretron recording equipment to the engines’ CPU and have digital recordings of all data, which is systematically averaged by the computer.

One of the most critical aspects of every center console’s performance is at what RPM the vessel gets on plane.  It is here that the Sharrow prop’s performance is remarkable.  In the chart above, it can be seen that the boat is nearly on plane at 2500 RPM and 15.4 mph.

At about 2800 RPM, the boat is firmly on plane (typically about 17 mph for these types of boats) with the Sharrow props and 25.4 mph at 3000 RPM. With the conventional stainless steel props, the boat has not yet been able to climb over its bow wave.

At 3500 RPM, where most engines produce their most efficient performance, the R302 equipped with the Sharrow props goes 58% faster than the boat with conventional blades (32.5 mph vs 20.6 mph).

This also means that the boat can stay solidly on plane at about 800 RPM less than it can with the standard props.

The raison d’etre for Sharrow props is improved prop efficiency, resulting in fuel savings. In the chart seen above based on data supplied by Sharrow Marine, we can see that the Sharrow props get more miles per gallon (MPG) than the conventional props at all speeds, except at WOT when both prop designs are equal.

Cruising Speed Efficiency. For a boat such as the Robalo R302 center console, cruising speeds are generally considered to be from 20 mph to 35 mph, where the range is maximized and comfort, depending on sea state, is best. Here we see MPG improvements from 15% to 29% for the Sharrow props over the conventional units.

High-Speed Operation. Most boat owners don’t run their boats at high speed for very long. This is simply because it is very expensive to do so, greatly reduces the boat’s range, is not good for the engine, and, depending on the sea state, can be very uncomfortable. It is here that the conventional props come into their own, nearly matching or equaling Sharrow's MPG performance at WOT.

Once again, these are Sharrow Marine’s test numbers. BoatTEST will be running its own sea trials on this vessel in early September and will report its findings. Stay tuned.