With a well-built boat in the 50-foot range most people can go pretty much anywhere they want to go in North America or the Med, and the Sea Ray 52 Sedan Bridge because of its 300+ mile range is no exception. In fact, owners of “expedition-type” boats in the mid-40-foot size range are now fairly regularly going across the Atlantic. The Sea Ray 52 Sedan Bridge is not made for that, but it illustrates the point that well-built powerboats in the hands of knowledgeable and experienced yachtsmen, can enjoy fairly adventuresome cruising these days.

Getting three staterooms in a boat this size is not easy, but Sea Ray has done it. The washer/dryer goes in a compartment under the galley sole which is just to starboard of the VIP cabin.

As most people know, Sea Ray is the largest builder of fiberglass power boats in the world. That gives the company a lot of advantages. One of them is that because they build so many more units than any other builder, they get much more owner feedback than any other builder. And Sea Ray changes their models with alacrity, particularly when they discover major improvements can be made.

Many enhancements have been made to this boat over the years and they include enlarging the 3rd stateroom and its bunks to accommodate a 6’ person or larger, walk-in access to the washer and dryer with added storage, enlarged galley with increased storage, and adding 23” to the length of cockpit to add “L” shaped seating, wet bar with grill and refrigerator. You see the larger cockpit in the photo below.

Wood soles come standard in the galley and under the dinette to port. The engine room is accessed through the hatch in the cockpit. This is just one of three optional cockpit layouts available. Check Sea Ray’s website for the other two.

We checked our “Owners’ Reports” for Sea Ray to see if we had one on the 52 Sedan Bridge. We did not. However, one reader had taken the time to report on their 48 Sedan Bridge which they had used for over 250 hours before writing us. So while it is not the same boat, it is a near relative and we feel some of the comments are worth passing along. Our reader, W.B. from Lake Forest, Illinois, said in part, “It’s really a dream boat. Just the perfect size for the Great Lakes…it handles well in 6-8-foot seas.”

Evidently this Sea Ray owner had been used to express cruisers and had liked the enhanced visibility that a flying bridge gives the helmsman. Listen: “I’m not sure we will move away from a sedan bridge again because it makes docking easy.” (To see the complete “Owner’s Report” , click here. 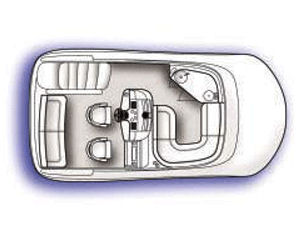 We think that this is as nice a layout as you will find in class on a flying bridge. Not only is there comfortable seating for a large party with refer, sink and counter, but there is also a fiberglass stairway to the bridge which is far easier to climb than a vertical ladder seen on most convertibles.

Back to the Basics

As we always point out, the basic specs of a boat should be checked and, often, the most defining one is the boat’s displacement. In the case of the 52, it is 42,000 lbs. Her beam is 15’3”, which is also an important number as it will help better define the interior space, stability, as well as speed and fuel consumption. Most 50’ sportfishing convertibles are from 48,000 lbs. to 65,000 lbs. displacement because of their beam, heft and heavy, high-horsepower diesel engines designed to make them go over 40 knots. 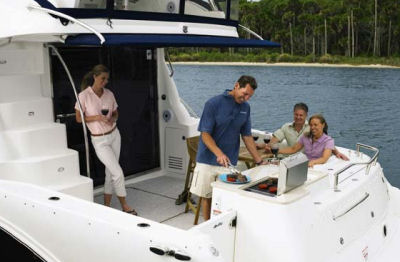 Sea Ray offers three different cockpit variations to fit your lifestyle and needs. This one has wet bar, grill and “L” seating. Note courtesy lights on the steps to the bridge and canvas awning on the aft end of the bridge deck. Hey, there are even rod holders! We recommend putting teak treads or some other nonskid on the fiberglass steps.

By comparison, the Sea Ray 52 is relatively light. She has a solid fiberglass bottom and balsa core is used in the superstructure to save weight. Because she doesn’t have to reach the arbitrary 40 knots required by tournament fishermen who want bragging rights, her engines can be smaller and turn in a respectable speed. Also, because the Sea Ray 52 is descended from a long line of express cruisers (the famous Sundancers) her beam is anywhere from 3” to a foot narrower than most convertibles in the same size range. This saves a lot of weight and makes the boat easier to push.

The 52 Sedan Bridge is powered by CMD QSM-11 ETS 765-hp diesels as standard. We have not tested the boat, nor have we put one of our captains on the boat for a thorough inspection and Captain’s Report with video.
Cruising Boat Types

These days when buying a cruising boat in this size range consumers have four basic types, for the most part, from which to choose: express cruisers, convertibles, sedans, and long range cruisers. The primary difference between convertibles and sedans is in the cockpit. A sedan’s cockpit is relatively short fore-and-aft because it is not made to accommodate a fighting chair, nor any of the attendant equipment like bait wells, fish boxes, bait prep counters, bait freezers, etc. 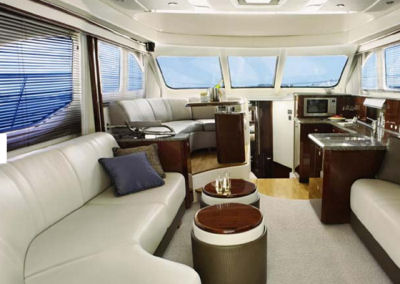 Sea Ray has gotten a lot in this 52’ boat. There is a strong emphasis on entertaining venues and comfortable seating. This cabin is bright and airy, unlike many convertibles.

It is interesting that Sea Ray does offer an optional fish box. If you are intent on making this boat a little more fishy it can probably be done with some dealer modifications. Interestingly, we are seeing more and more convertibles along the dock these days without fighting chairs, which must mean they are used for light tackle fishing or primarily for cruising.
Go For the Bridge

By having a flying bridge, the helm can be eliminated from the main cabin, as Sea Ray has done, which opens this area up for a large galley, settee and entertaining area. On the flying bridge you have yet another entertaining area as well as plenty of room for all of the electronics needed and a companion seat next to the helmsman. The 52 comes standard with cruising canvas for the bridge which means that this boat can be used both early and late in the seasons as well as in driving rain. The builder also offers optional air conditioning on the bridge. (We suggest you have it installed as it also becomes a heating system.)

Also, the incremental cost of a flying bridge over a hardtop express is well-worth the up charge when you figure in the incredible increase in utility and living space.
Bite the Bullet

As everyone knows now is the time to buy nearly any big ticket item, including new boats. Sea Ray is famous for not being shy about discounts and now is probably the best time to find out just how generous it can be.

As we have said before, once the current inventory overhang is sold off, competition will be reduced and prices will rise. In the case of large boats like the 52 Sedan Bridge, in the future many builders will only be building large boats to order. What do you think your chances will be to get a deep discount then?