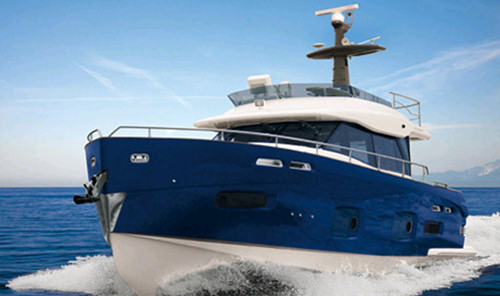 Naval architect Bill Dixon drew the Magellano 50's "Dual Mode" hull. Underwater, it's a cross between a round-bilged displacement yacht and a V-bottom, and is efficient across a wide range of speeds, we're told.

A Yacht for All Reasons

Anyone familiar with Azimut yachts will double-take when they see the nameplate on the Magellano 50, something completely different from the company's standard fare. But this yacht has a different mission than her racier sisterships: She's a bona fide cruising yacht, long-legged enough to go almost anywhere that doesn't involve crossing an ocean. Her modest power, twin 425-hp common-rail diesels, are fuel-efficient, and when throttled back will carry her more than 1,000 sea miles, according to Azimut. The yacht has CE Class A, Ocean, certification. 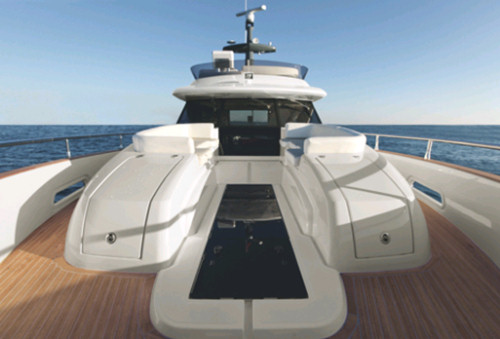 The Magellano 50 isn't all technology – like every Azimut, it includes lots of creature comforts, like this on-deck lounge. Note the wide sidedecks and high bulwarks, topped with rails for even more safety. The 50 is truly a yacht for taking to sea.

But let's be realistic: Although many people buy yachts like the Magellano 50 with the idea of making long cruises, most of the time they're navigating close to home. And who wants to do that at 7 or 8 knots? You might as well have a sailboat. Azimut thought of this, and designed the 50's hull to be easily driven and efficient at a wide range of speeds.
When spooled up, the twin diesels will push her up to 22 knots, and cruise on-plane at 18. (All speed and performance figures are from Azimut; we haven't tested this boat ourselves.) The range will be much less than at displacement speed, but most of the time fuel docks are near at hand, so long range and slow speed aren't critical. 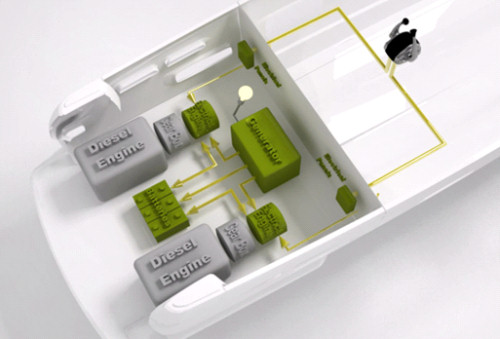 The optional Easy Hybrid system adds electric motors to each Cummins Mercruiser diesel, between the gearboxes and V-drives. A high-capacity lithium-ion battery runs the motors, which can drive the boat only at low speeds. When more power is needed, the diesels start automatically – but the skipper can select an "electric-only" mode, too.

Add the Easy Hybrid system, which runs off a lithium-ion battery pack which is in turn recharged by the yacht's twin 20-kW generators, and the range is "restricted only by the need to service the generators," says the company. When not driving the propellers, the electric motors can generate power. The Magellano 50 is the first yacht to utilize Easy Hybrid technology.
We think it will be most useful in docking and low-speed maneuvering – electric motors develop maximum torque at minimal rpm, so the skipper should be able to dial-in just the motor speed he needs – and while making short, leisurely runs between anchorages. The system shifts between electric and diesel automatically. 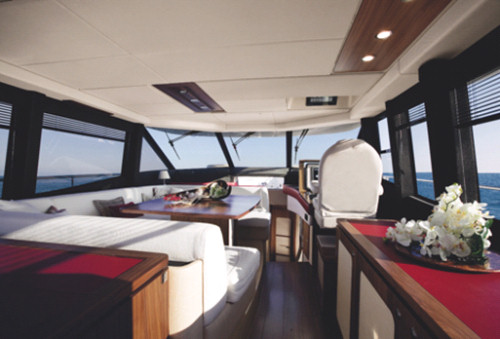 She may look like a tough cruiser on the outside, but the Magellano 50 is all Azimut belowdecks and in this elegant salon. The glass is coated to resist UV rays and keep the deckhouse cooler, part of Azimut's efforts toward green yachtbuilding. The galley and formal dining area are both here.

Most hulls are designed to run efficiently at a particular speed, so creating one to be economical across a range of speeds took creativity. Naval architect Bill Dixon drew the Magellano 50's "Dual Mode" hull, a hybrid of its own: It looks like a cross between a round-bilged displacement yacht and a V-bottom. (Old-timers will note its resemblance in midships section to a C. Raymond Hunt hull of the 1950s, a precursor to his deep-V.)
Dixon combined a sharp bow for a soft ride and precise steering with a rounded midsection for stability at displacement and semi-displacement speeds; shallow deadrise aft combined with wide chines lift the hull onto plane as speed increases. Propeller tunnels let the shafts be set at a shallower angle for added efficiency. 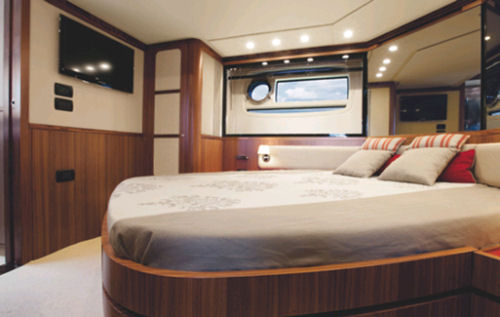 The master stateroom is amidships, and has all the comforts you'd expect in a yacht of this caliber. The berth is mounted diagonally to better utilize the space. 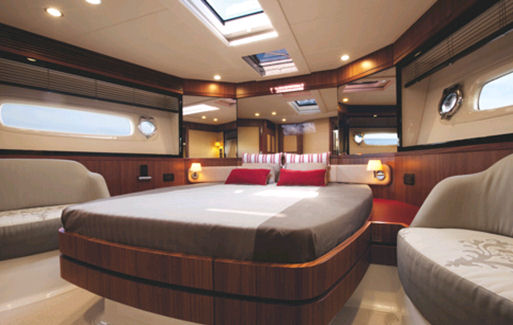 We almost like the VIP stateroom forward better, although the motion up here will be greater at sea. But the hull windows and skylight provide lots of light, there's good access to the berth from both sides and lounges port and starboard. The mirrored headboard makes the cabin seem even larger.

In 2007 Azimut was awarded ISO 14001 certification for its Avigliana shipyard, attesting to the company's dedication to environmentally compatible construction. It's the first major shipyard to earn this certification. In keeping with the company's goal of "zero-impact" yachtbuilding, Azimut employs state-of-the-art technology in building the Magellano 50. Her principal fiberglass components are resin-infused to minimize fumes and air pollution; all woods used on board are certified by the Forest Stewardship Council to come from eco-sustainable sources; her glass surfaces are coated with an anti-UV film to reduce heat exchange and minimize energy used for belowdecks climate control; her lighting is LED to save power; and so forth. In short, the Magellano 50 is about the most environmentally friendly yacht we've seen – and she is certified Green Plus by RINA (Royal Institute of Naval Architects). 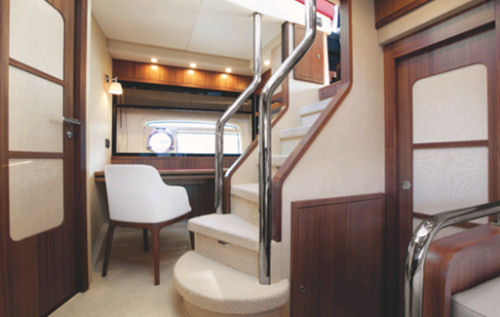 There are several layouts available; the one we like has two staterooms and this studio, a good place to do ship's business, write in the log or just relax with a book. The stairway leads to the salon, galley and lower helm.

The Azimut Magellano 50 looks to us like a very interesting yacht, and one that should appeal to long-range and near-shore cruisers alike. It's an option for folks looking at a trawler yacht but who don't want to limit themselves to low speed, and also for those who want a cool-looking coastal cruiser, but with longer-than-typical range. Add the Easy Hybrid system, and it's even more appealing (full disclosure: we drive a Prius). 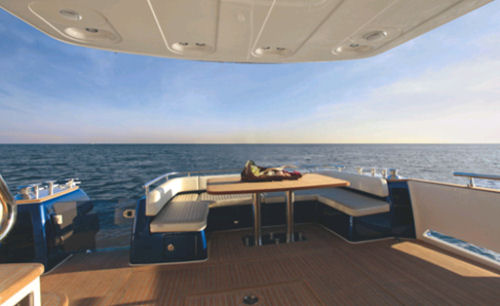 Sometimes it's nice just to sit and watch the wake, and the Magellano's aft deck is a nice place to do it. This lounge would be our primary dining area in fine weather, although there's one in the salon and another on the flying bridge.

The entire 2011 production is said to be sold out. (We expect the price is in the low seven figures, but that's just a guess.) Many of those "sold" boats are probably going to dealers rather than private buyers. We spoke with a broker at MarineMax in Ft. Lauderdale, an Azimut dealer, who said they had two Magellano 50s on order. Azimut says it will introduce the yacht in the U.S. in the autumn of 2011.

Azimut offers four accommodations plans, with two or three cabins. Our choice is this one, with two staterooms and heads, the studio/office to starboard and a utility room with washer/dryer and a single berth to port. Another layout includes a lower-deck dinette.