Many long-established yacht builders are struggling to stay afloat, but Absolute, a young Italian boatbuilder, seems to be thriving: The company has just launched another sexy sport yacht, the Absolute 42 Hard Top. Joining a fleet that ranges from 40 to 70 feet, the 44-foot (13.4 m) LOA 42HT is a boat to consider if you're looking to jump into the world of Med-style yachting. Like so many first-class Italians, she combines a sleek exterior with tasteful minimalist decor belowdecks (why are the Italians so good at this?) to create an inviting yacht for high-profile dayboating or short-range cruising. She sleeps four in two cabins, both with heads; has a small galley adequate for preparing lunch or casual dinners; and lots of room on deck for sunning, swimming or just sitting and talking around the cockpit table. 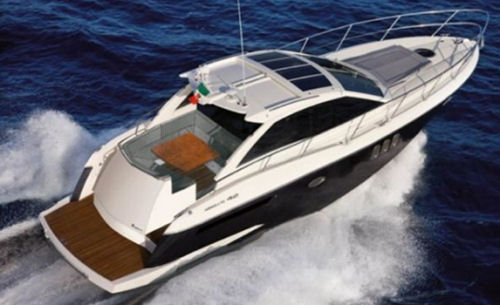 The Absolute 42 Hard Top is classic Med-style yacht, with lots of places to enjoy the sun: Not only is there a sunpad (required in a boat of this type), but also wraparound seating on the aft deck and a spacious swim platform. Absolute powers the 42 with Volvo Penta diesels, either IPS or Duoprop sterndrives.

We like the hardtop with sunroof, a standard feature on the Absolute 42. Or is it a moonroof? When closed, the tinted panels admit light into the pilothouse, but we think most folks will ride with it open. The three vertical ports in the hull illuminate the salon; the oval ports fore and aft light the two staterooms.

Born in the 21st Century

Absolute was founded in 2002, when Sergio Maggi and Marcello Be decided it was time to build their own line of boats, designed for "people who know how to enjoy relaxed and carefree luxury," according to the company – for people who "have a feeling for glamour on the sea." The first Absolutes, a 25 and 45, were launched in 2003; neither model is built today, but they must have been successful: By 2005 production at Absolute's modern boatbuilding plant had risen by 35%, and the company was making plans for models over 50 feet (15.24 m). 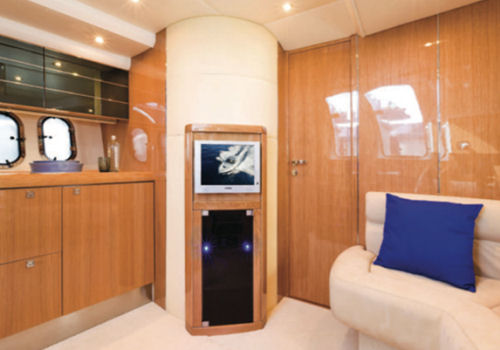 The Absolute 42's salon is cozy – it has to be on a boat this size, if two staterooms also must fit belowdecks. But it's large enough for a comfortable U-lounge/dinette, the galley (at left, above) and an entertainment center. Light-colored, high-gloss joinery, off-white overheads and cabin sole make the best use of the light pouring in through the hullside ports. However, we'd opt out of the white sole – it wouldn't stay white long with our crew. 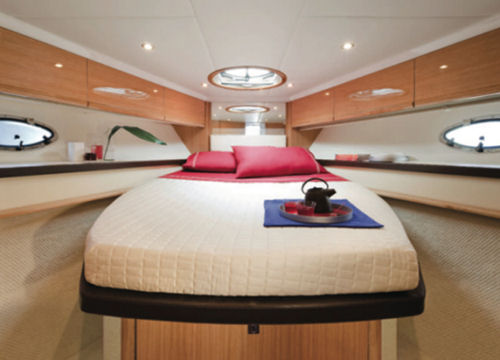 The master cabin is forward, and, again typical of a boat this size, looks a little tight around the berth to us. But there is room to climb in over the sides rather than slither in from the foot. We like the overhead hatch, good for both light and fresh air, the cross-ventilation from hullside ports, and the shelves along the cabin sides to put our stuff at night. There are ample lockers above and stowage below the berth.

Many Engines, Many Props

Diesels are the power of choice for the Absolute 42; no gasoline engines are offered. This is typical in Europe, where gas is very expensive and not as easily obtained at marina fuel docks as in the U.S. All the engine options for Absolute are Volvo Penta: The 42 can have either twin 330-hp D6 or 300-hp D4s with Duoprop sterndrives, or IPS500 or IPS600 pods. The boats we've found on the market, all of them in Europe, have been D6 Duoprops; we haven't tested the Absolute 42 ourselves, so don't hold us to these numbers, but sources around the Med claim 34 knots top speed with this power, 28 knots cruise. 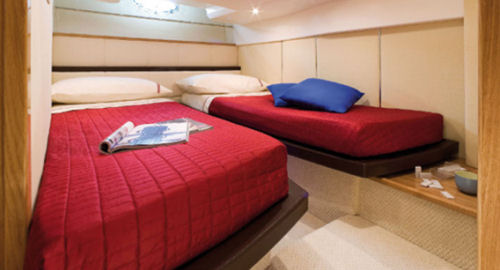 The guest cabin, amidships, is in the widest, most comfortable part of the vessel, so we might sleep here while underway. The athwartships twin berths are refreshing, since too many designers rely solely on double berths, making sleeping arrangements problematic at times. This cabin also has an ensuite head.

Pods are getting all the press nowadays, most of it good – and deservedly so: they are excellent systems -- but we think sterndrives are fine when matched with modern controls. The Absolute 42's turbocharged Volvo D6 sterndrives come with EVC and joystick control, making them virtually as handy around the marina as pods. The EVC system (electronic vessel control) allows for precise control of the diesels, including automatic synchronization and trim assistant. Engine vitals can be displayed on a multifunction color screen. Trim tabs are also standard on the Absolute 42.

The galley is compact, but makes best use of the limited space by covering the cooktop and sink to create a long countertop. Here, the lobster is over the sink while the stove is exposed...

... And here's the sink, with an integral drainboard. If you're cooking something and need the sink, you lose almost all the counter space – not the best set-up, in our opinion. But there's limited space here, so what's the option? We don't know.

We found several 2010 Absolute 42s for sale in Europe – the boat is sold all around the Mediterranean, but so far we've found none in the U.S. Prices ranged between €380,000 and €434,350, exclusive of VAT, other taxes, duties and so forth. All the boats we found had the Volvo Penta D6 Duoprops.
Absolute sells the 42 very complete, with the electric sunroof; a hydraulic swim platform decked in teak; a 7' 3" (2.20 m) garage for the tender or water toys; grill and refrigerator in the cockpit; electric anchor windlass; even a searchlight. There are the usual options, too – contact an Absolute dealer for details.
Would we buy this boat? We don't know enough about Absolute to say definitely "yes," but from what we've seen, the 42 should certainly be worth further investigation. It costs nothing to look, and you might end up with just the boat you want. 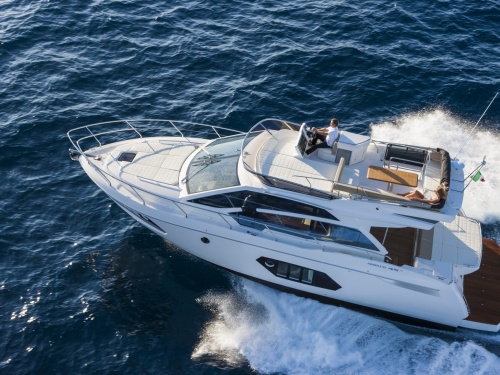