While Albemarle didn’t re-invent the wheel with the 290XF, they did make some significant improvements over their popular 280. How many times will it take before builders stop fixing things that aren’t broke? This original hull was first introduced in 1984 as the Albemarle 27 and it was an instant success. It was reintroduced with layout and deck changes three times through the years, with the 280 being the last version. Ultimately, 643 hulls were built. But, not ones to rest on their laurels, it seems the good folks at Albemarle have once again revamped the popular 280 and actually made it larger in all directions. The all new 290XF is the result and it’s designed as a replacement for their very popular 280XF. And go figure, by all accounts, it appears that the new version is a hit in all departments.Apply here for the "Special Find Price" 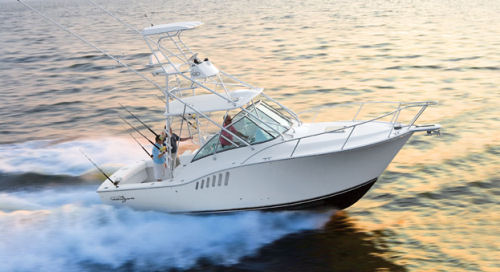 While Albemarle didn’t re-invent the wheel with the 290XF, they did make some significant improvements over their popular 280.

Rugged is as rugged does...

When a boat builder’s playground is in the outer banks of the Carolina’s, your reputation hangs in how tough your boat is. It’s like the saying goes… “We have to be better, we live here!” Since there’s never been any question about how tough these boats are, why start now. That said, while the new 290XF is still hard as nails, she is larger than her predecessor. The 290XF is 1’ (.3 m) longer and 1’3” (.38 m) wider than the 280. While that may not seem noteworthy, couple those numbers with a significant increase in weight, a full 3,000 lbs (1,361kg), and now you have a boat that should outperform the earlier version in a big way.
And it gets better. The deadrise is lower on the new version as well. Albemarle dropped the angle from 24 deg (the true deep-V of Bertram 31 fame) to 21 deg. which will make the boat go faster, be more fuel efficient, and reduce her draft. All the while keeping the signature prominent flare of the bow. The air intakes for the engines are well forward but high, just below the helm, but Albemarle assures us that there are no water intrusion issues. The vents have fiberglass boxes built in which catch the majority of the water that enters and spits it back overboard, they say. There are also removable filters in the engine room which take care of any saltwater that attempts to enter. And these filters don’t even need replacing. Just remove them periodically and wash them out. 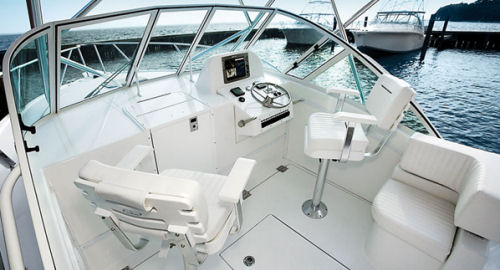 A straight forward helm with dual adjustable seats. Note the hinged deck for easy access to the machinery space. Note the extra high windshield – whether you are standing or sitting, you will be looking through the glass! Full marks to Albemarle for doing this right.

While we haven’t tested this boat for verification yet, we do have initial reports from Albemarle that this new model is a much better handling boat than the old version. Albemarle attributes this to both the change in deadrise, and the prop “pockets” designed into the hull. This has a dual advantage.
First, it allows for a shallower draft, 32” (81.3 cm) vs. the previous 36” (91.4 cm) which means fishing in the shoals as well as blue water, and secondly, the pockets lower the angle of the drive shafts as they exit the hull. By being closer to horizontal, the propellers are much more efficient, more of the thrust is directed aft rather than down.

There aren’t too many changes in this arena. It’s still a dedicated fish boat and not a family weekender. One significant change, however, is that the 290XF sleeps four, two in the V-berth and two more just above in Pullman berths that deploy from the hull sides. It’s not a new idea, but we like it. A convenience package is on the options list that includes a 4kw genset and reverse cycle A/C.
Another change that Albemarle made was to increase the water capacity from 13 gallons to 28. This is great as 13 doesn't last long, even if you use the saltwater washdown to clean up and freshwater just for a final rinse. Now, throw in the optional hot water heater and DVD/LCD TV and nights at the fishing grounds are not only bearable, they’re downright preferable.

The V-berth below sleeps two and there are two more Pullman style berths right above for sleeping two more. The galley and head are pure workboat so don’t look for wine and cheese storage. Options do include a TV/DVD and stereo. On deck, there’s plenty of room for a fighting chair on the metal reinforced sole. 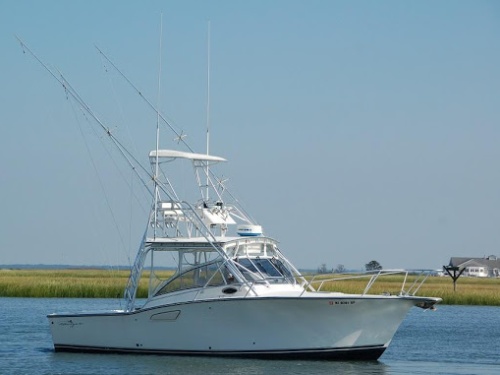 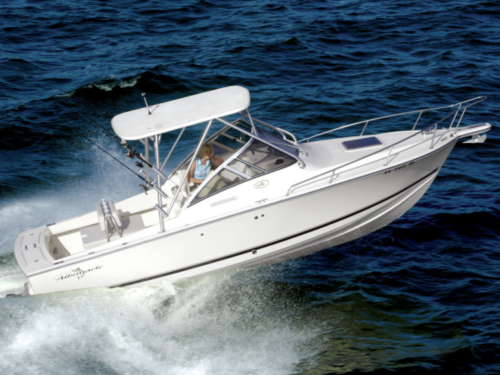 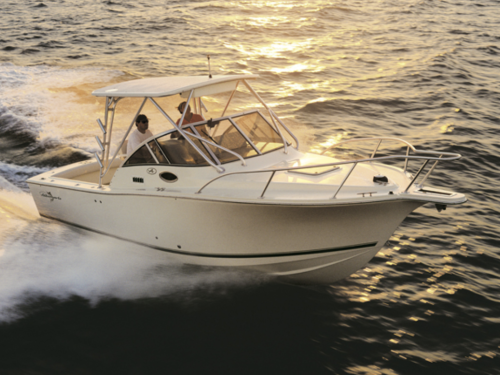 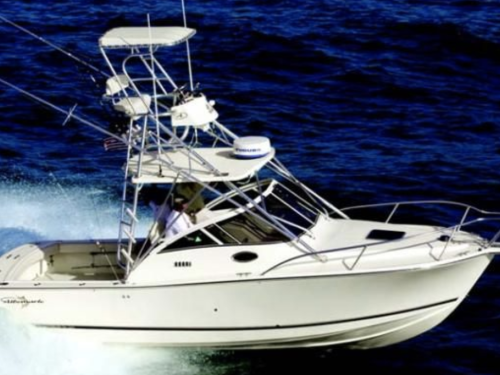