Bertram Yachts has spent decades telling the world what a great fishing boats it makes, and we wouldn’t disagree, but we think the Bertram 410 also makes a terrific cruiser. Many of our friends have shelled out $800k for new express cruisers in the 43’ to 44’ range, then haven’t them on much adventuresome cruising. Are they wimps? No, but they don’t want to exceed the capabilities of their boats, and they are not quite sure what their boats’ sea-keeping abilities really are. However, if they had a Bertram 410 they wouldn’t have given a second thought to blasting out to the Abacos, down to the Turks and Caicos, or up to Nova Scotia. 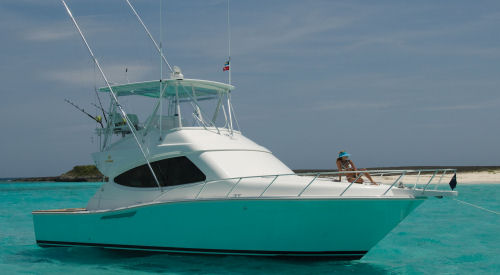 This boat was made for cruising. Who wouldn’t take this Bertram 410 most anywhere? 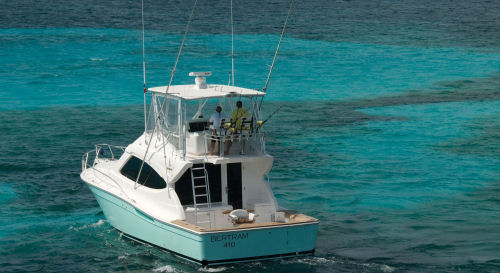 The gin-clear waters of the Bahamas and other islands have launched many a dream. But to get there, one must cross some serious blue water. No problem, says Bertram.

Bertram: The Trend is Your Friend

All of the sportfishing magazines not withstanding, every boat builder knows that the trend the last few years has been toward cruising. Even the fishiest boat builders tell us that about half of the people buying most brands of convertibles are buying them mainly for cruising with a little casual fishing thrown in. We have always liked convertibles for cruising (and owned them) because they are usually excellent sea boats.
What makes the Bertram 410 so capable offshore? First, 40 years ago Bertram claimed blue water as its domain and it has never given it up as the company’s primary focus. If a Bertram can’t take good care of you in snotty conditions, then you shouldn’t be out there in anything.
Second, because being a rugged, fast, offshore boat is its “reason for being,” Bertram engineers make sure that their boats are strongly built. This is a tradition started by Lee Dana, Bertram’s chief engineer back in the 1970s. He is a crusty, no non-sense type of guy who never let the pantywaists in the marketing department push him around with the flavor of the month. He built them strong no matter how much it cost or how long it took. 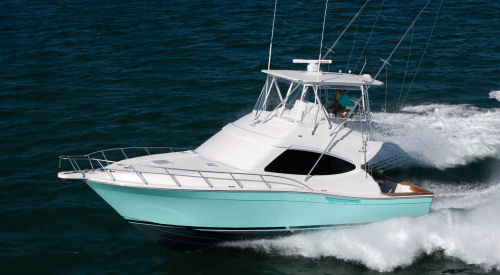 The Bertram 410 has the traditional Bertram styling, updated by Zuccon International in Italy.

The Bertram-Ferretti Group design and engineering departments with their CAD-CAM software, test tanks, 3-D modeling are a lot more sophisticated than was Dana and his trusty slide rule, but their end goal remains the same. That is why the 410’s hull is solid fiberglass under the waterline. That is why the Bertram 410 is on the heavy side eventhough the company uses SOTA core materials in the hull above the waterline and in the superstructure and decking throughout the boat. 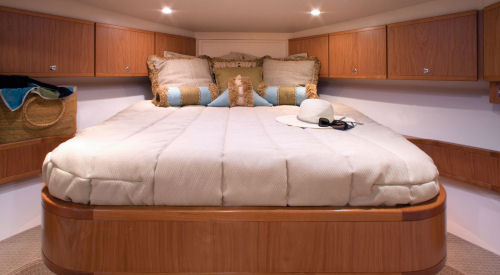 We like the cabinets just below the overhead port and starboard. A second row of them with a lip on top would make this cabin even more attractive and provide more storage. Will a washer/dryer combo fit under that bed?

Then we come to large express cruisers built by companies that got their start in sportboats – there the Bertram 410 is 52% heavier than one of the leading brand’s sedans in the same size range. This is a huge difference, and perhaps it explains why some of our friends are reluctant to punch too far out in the briny.

We called the Bertram factory and asked for the MSRP for the Bertram 410. We were told that it did not have an MSRP and that we’d have to call a dealer to find out. Depending on when the 410 was built, the engines and equipment, it seems that they sell for from about $800k to $1 million. Most dealers were reluctant to talk “street prices” unless we came in. No wonder. At first blush, their boats seem pricey. 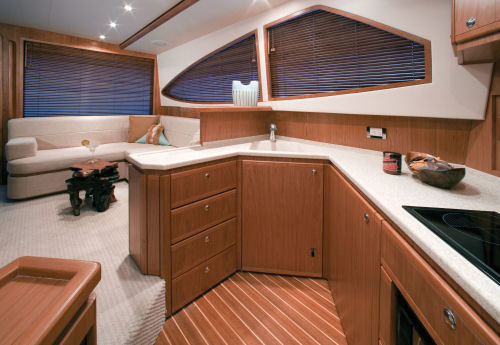 We’d like to see rails on the stove top and fiddles on the counter.

Clearly the Bertram 410 is in a class of its own. Because the boat is from 8,000 lbs. (3,636 kgs.) to 15,000 lbs. (6,818 kgs.) heavier than virtually all 42’ to 45’ expresses, sedans or convertibles on the market, there is a lot more material – and expense – built into the Bertram 410 than other boats on the market in the same size range. Uninformed buyers comparing just length and price (as most buyers mistakenly do) will come to the conclusion that the Bertram 410 is way over priced, when in fact, it is just the opposite.
Our rule of thumb when comparing boat prices is to divide the cost of the boat by its displacement and then compare. When there is a big discrepancy, we ask why? At $1 million, the Bertram 410 comes out to $23.14 per lb. Compare that to the sportboat on steroids and you’ll find out which is the more expensive boat. Even more important, you won’t be afraid to take your 410 offshore because you know you have a solid boat under your feet. 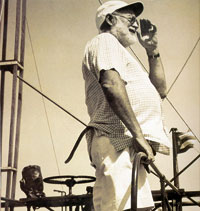 Hemingway on his flying bridge.

Once upon a time cruising boats did not have flying bridges, and neither did fishing boats. They were all hard tops. Then in the 1940s Ernest Hemingway jury-rigged a steering wheel on his beloved Pilar and the world took notice. Being a writer and not an engineer, Hemingway didn’t know all of the reasons why steering from a hard top was a bad idea. It wasn’t long until others realized what a good idea it was because the added height made it easier to spot fish on the surface.

This is a near-perfect flying bridge arrangement in a 41-footer, in our opinion. It seats 7 people comfortably and has good visibility to the cockpit and the bow, plus is a comfortable entertaining venue.

We like a flying bridge in a cruising boat for several reasons—
First, visibility is far better from a flying bridge. At anything above idle, a skipper needs to have good 360-degree visibility to see what is around his/her boat – other vessels, rocks, floating logs, kayakers, etc. All of these things are far easier to see from a flying bridge.
Second, by moving the helm from the salon to the flying bridge more space is available below for the galley, a settee, more comfortable seating and much more storage.
Third, it is great being out in the wind and the weather. With the addition of a canvass top and some isinglass you can turn the flying bridge into an all-weather helm station. With seating for seven on the Bertram 410 on the bridge you can have all of your friends up enjoying the sights together. The view is unbeatable!
Fourth, it is easier to dock a boat in a tight shlip from a flying bridge. 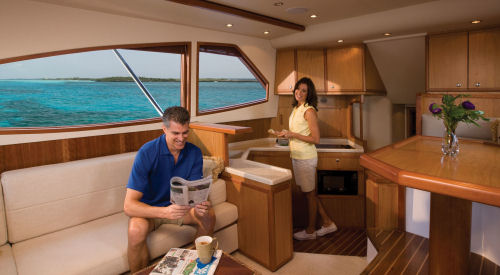 The sofa can make up into a sleeper. Note the cabinets across the front instead of a windshield. There is also a lower helm option.

Fifth, flying bridges are a low-cost way of adding useable living space to a boat. In our book, the more “venues” for guests to hang out in a boat the better.
Sixth, if you have ever steered an express cruiser in really sloppy conditions with the wind just off the bow or abeam you know how difficult visibility can be. Worse yet, try punching through short 6’ to 8’ stuff going to windward and you can have green water washing your windshield. A flying bridge puts you high and above most of what the wind and sea kick ups so you have better visibility. It gives you a different and much more realistic perspective of the conditions you are in.

The Bertram 410 has a step-down galley and a step-up settee. Six people can be comfortably seated at two tables for dinner. The cockpit is a great place for cocktail parties. Set up tapas and drinks on the bait-prep and refer console. Get rid of the fighting chair and put a table there and seating around the perimeter.

The Bertram 410 has an “L”-shaped sofa for hanging out and socializing. It can be made into another bunk at night if the grandkids are aboard. The settee is a great place for breakfast and lunch. The set-up also works for more formal dinners but at two tables. We like it – just add candles.
The galley area is about as big as you’ll find on any boat this size. Look at the deck space! Because it is a step-down there is a lot of head room, making the space seem even bigger. In this arrangement there are no forward windows which means there is plenty of cabinet space for all manner of things.

The Bertram 410 has two en suite staterooms. The master head has a separate shower stall. Most important, this is a 41-footer with full head room in the guest cabin.

Bertram has done a clever job of shoe-horning two cabins and two heads into a relatively small space. The master has two hanging lockers and a large head. Note that the toilet and sink can be used at the same time in both heads, which is a sign of thoughtful design and helps speed a couple on their way when time is short getting going in the morning or rushing to cocktails at night.
The guest stateroom is tight and the outboard bunk is narrow when in the twin configuration, nevertheless the cabin has full standing headroom which is something you won’t find in this size range in the Euro-designed expresses. We’d ask Bertram about putting over and under bunks here.
What we don’t see is a washer/dryer, something that is not typically found in this size boat. Serious cruising types might want to talk to Bertram about finding a place for a front-loading washer/dryer combo someplace aboard. 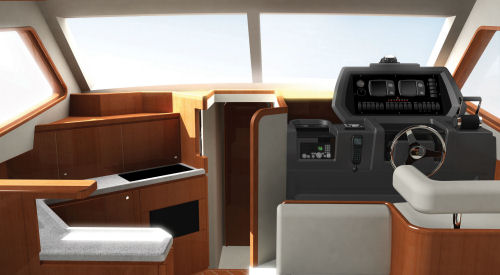 Blow out the settee and go for the lower helm option is one option. Of course you lose the forward cabinets. We’d make the backrest on the jump seat in the foreground slide back and forth so the skipper can have a companion helping when under way.

We have not tested this Bertram so we cannot attest to its speeds, fuel consumption and boat handling. Because the boat is heavy and a semi-deep-V it will take some horsepower to move her fast. Speed is a sensitive subject with Bertram techs (one once hung up on us when we were discussing the subject with him) because consumers tend to compare a Bertram’s speed with its light-weight competitors, many of which have flatter bottoms.
But when cruising, whether a boat goes 27 knots or 29 knots WOT makes little difference; chances are the boat will be run at 20 knots or less in any case. And when it comes to rough water, the Bertram 410 will go faster than most other boats because of her bottom shape and rugged construction, if that is what you want to do.

As the late Sy Syms used to say in his TV commercials, “An educated consumer is our best customer.” And that holds true for boats as well as men’s suits. The Bertram 410 is simply in a class by herself, in our opinion. She is a veritable Abrams tank on the water. For people who really want to go somewhere and not worry too much about the weather, Bertram has a 41-footer that they can appreciate.
On the other hand, for people who are just going to dart from marina to waterside bistro and back again across the sound, better save your money for the Lobster Oscars and mojitos.