Bullet designs and markets the 21SST as an elite-level bass boat in terms of its performance and top speed. It’s designed and equipped to serve the needs of a serious bass angler who has the skill and experience to handle bass boats at very high speeds. 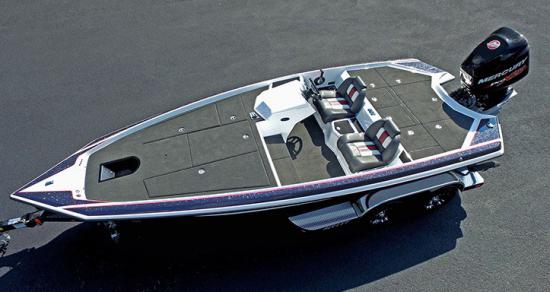 The 21SST has a wide-open layout that lets multiple anglers work fish during a tournament.

We did not test the boat, nor do we want to run any bass boat at the speeds that this boat is capable of. However, we were on site when Mercury techs tested her. Because manually recording test data at these speeds, even with two people aboard, is impossible, Mercury techs have hooked up a riding computer to record all of the major data. Once back at the dock, we were given a printout of the speed run. Those are the numbers reproduced here.

In acceleration tests provided in the Mercury printout, the 21SST ran to 20 mph in 6.2 seconds and to 30 mph in 8 seconds. Mercury uses Transient Spark Technology to advance engine timing under hard acceleration, which the company says gives the engine from 5% to 7% more torque.

103 MPH. Subsequent to our couple of days on the water testing the new Mercury engines at Lake X, we received an email from Mercury’s director of testing stating in writing that the boat hit 103 mph. Mercury Racing’s goal was to exceed 100 mph average in reciprocal runs, and evidently they exceeded that goal. 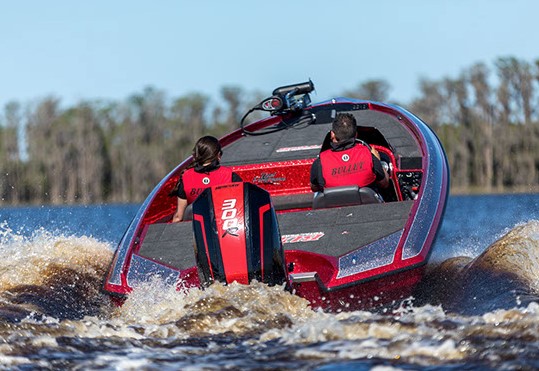 The optional jackplate can be adjusted to help reduce bow rise during hard acceleration.

The new 300R is a 4.6-liter 4-stroke V-8 with direct fuel injection. To give the motor maximum performance, Mercury designs the powerhead with shorter runners on the intake manifold, dual overhead cams with a more-aggressive grind and a maximum rpm of 6400, which is about 200 rpm more than the 300 Pro XS.

The 300R comes with the inspection hatch on the top of the cowl that permits quick checks of the oil level and facilitates adding oil. It also has the single handle that releases all the cowl latches to make it easy to remove. The motor comes with three different gearcases, the SportMaster, the TorqueMaster and the 5.44” diameter HD. Our test model had the SportMaster, which is defined by the sharpened nose on the torpedo and the low-water pickups. There are also two different midsections, the Conventional or CMS and Advanced or AMS. The Bullet engine had the CMS with 100-durometer rubber upper mounts and solid lowers. 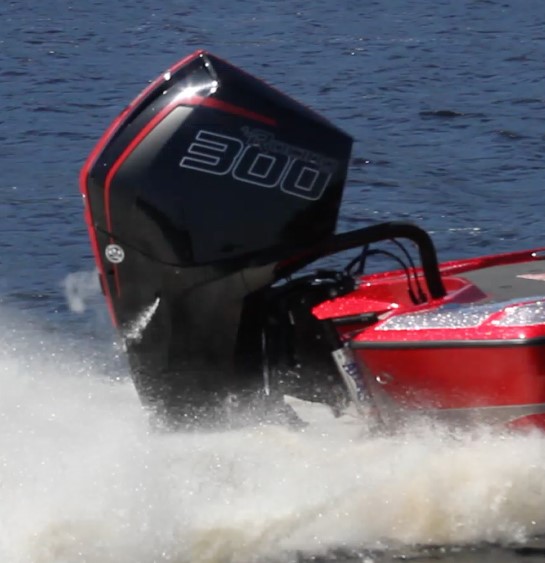 The 300R is one of two new models available from Mercury Racing. 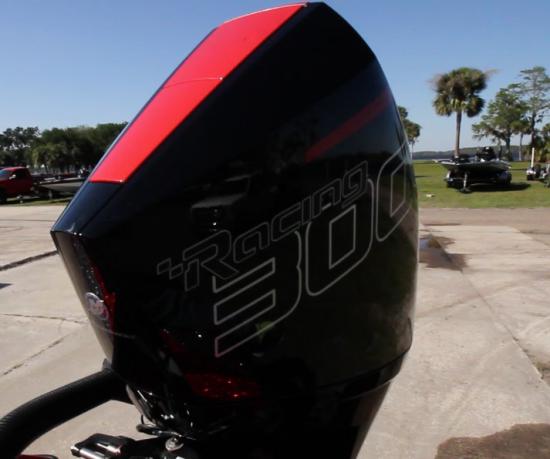 The panel on top of the motor can be ordered in a primer finish and then custom-painted to match the boat. 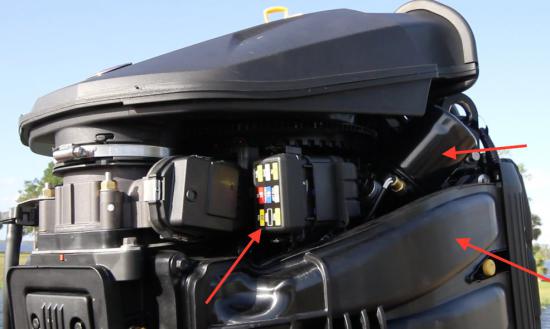 The arrow to left shows the easy to access fuses, while the oil filter is to the upper right. The shorter intake runners are designed for maximum performance. 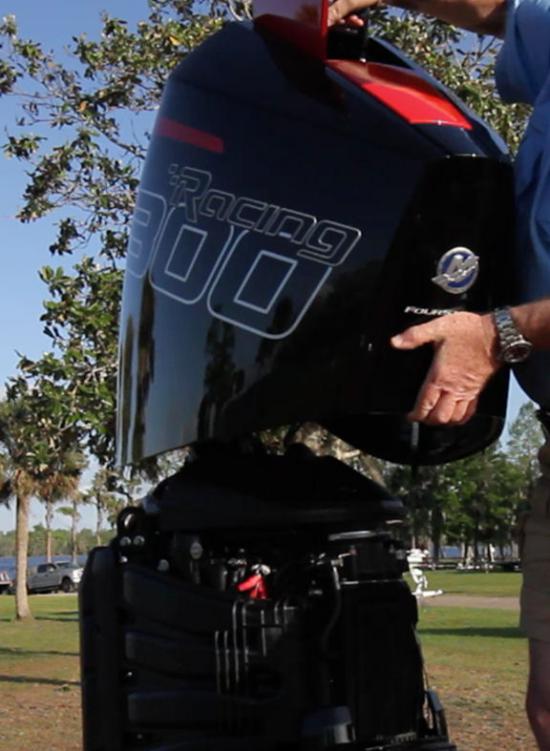 With the pull of a single handle, the cowl comes off. No more bear hugging the motor to reach the latch on the rear. 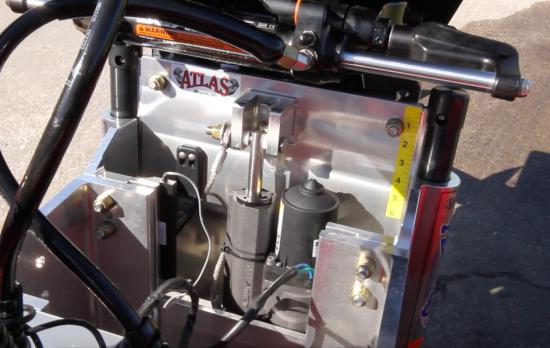 Our test boat was equipped with an Atlas jackplate that can be used to squeeze out maximum performance and to raise the motor for fishing in shallow areas.

Bullet points out that it builds its boats with a focus on high strength and light weight. Company technicians hand-apply large continuous layers of fiberglass fabric over the core, balsa in the hull bottoms, composite in the transom and deck. The stringers also have composite coring, according to the company.

Kevlar reinforcement is used in key areas, says the builder, and the laminate is wetted out with vinylester resin, also applied by hand to ensure consistent saturation. Finally, Bullet lets its hulls and decks cure for as long as eight days, which is somewhat unusual for boats in this bass boat category. Longer in the mold is better, and at least one builder we know pulls them out after a day.

It is generally accepted in the industry that a longer in-mold cure time ensures a better external appearance and a more true running surface because there’s less of a chance of hook or rocker that can be the result of a boat being pulled from the mold too soon.

Once an angler has outrun all the boats to a hot spot, the 21SST has plenty of space for fishing on the bow casting deck. All the way forward, there’s a Motor Guide trolling motor with a foot control in a centrally mounted recess. Just aft of the foot pedal is a socket for installing the fishing seat. To starboard in the foredeck are the light, livewell, and motor trim switches. The center has space for an optional fishfinder and to port are the plug for the trolling motor and a 12-volt accessory. Forward is a receptacle for the navigation light.

The forward fishing deck is covered in marine-grade carpet for increased comfort underfoot. 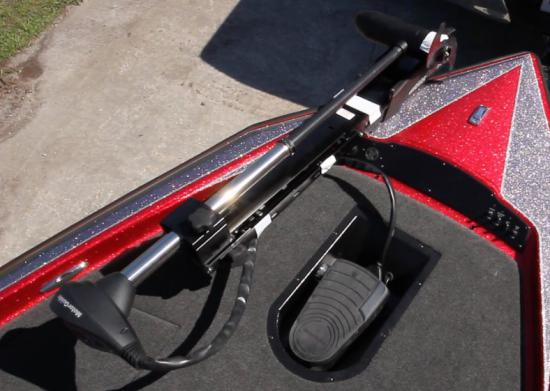 The 21SST comes standard with a MotorGuide trolling motor and the foot control is recessed below deck level. 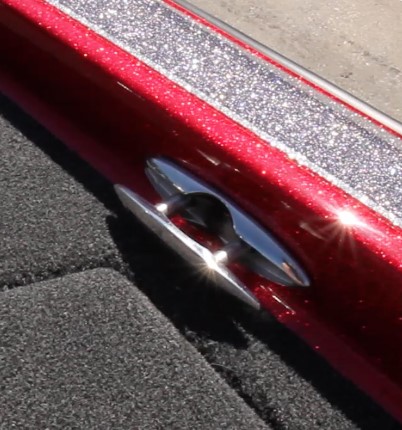 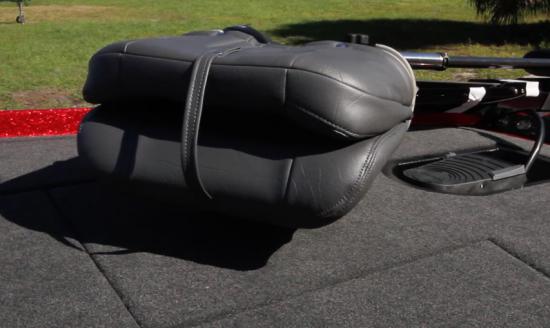 When it’s not in use, the fishing seat folds down and inserts into an in-deck socket. 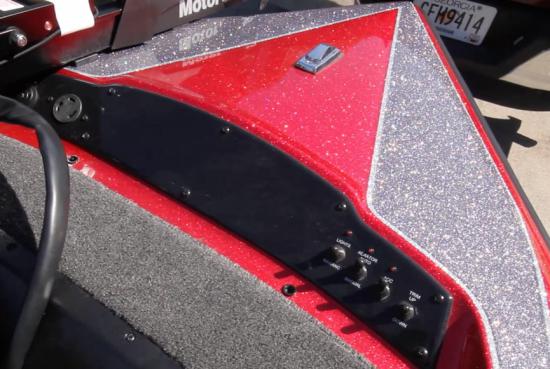 The use of rubber-booted accessory switches is smart for an area that could be exposed to spray. 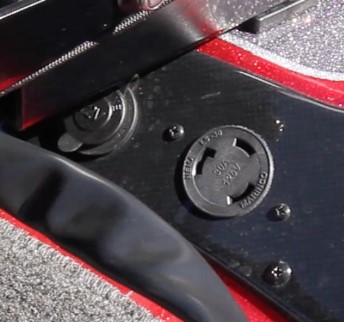 We would like to see a cover for the trolling-motor plug to keep out water. If an owner doesn’t want to remove the trolling motor, it can be hard-wired to the battery.

Bow Storage. A total of four locking hatches with pneumatic struts open the bow storage compartments. All are lined with carpet and the center locker has slots for tackle boxes plus space for the fold-down fishing seat that can be installed in the fore or aft fishing decks. The port locker is equipped with tubes to hold individual rods. 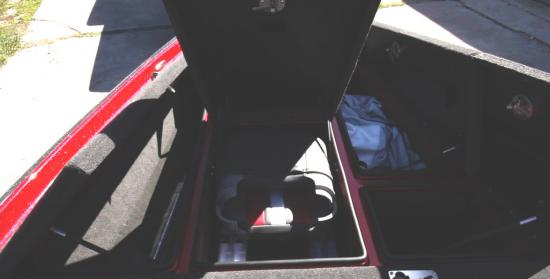 While competitors use aluminum reinforcement on their locker hatches, Bullet prefers Kevlar and composite in the laminate. 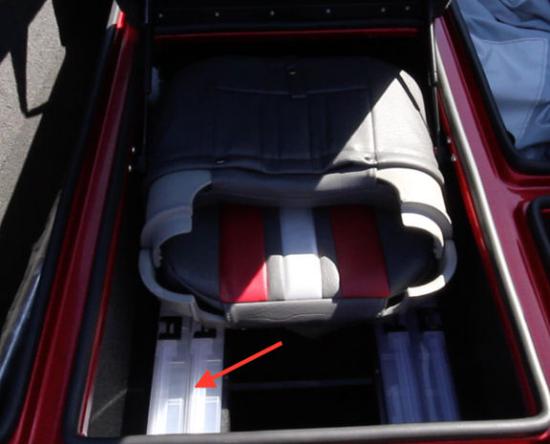 Beneath the fishing seat, there are slots for tackle boxes that can be easily changed out, depending on the day’s prey. 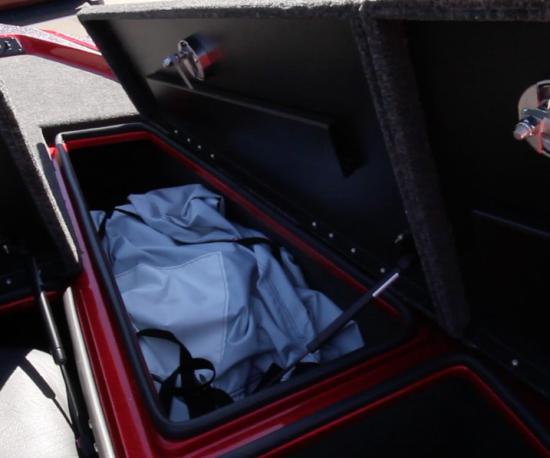 The starboard bow locker has enough space for the full cover that came with our test model.

The Seats. A step down leads from the foredeck to the seating area. As we’ve seen on most bass boats, the top of the step is hinged and it opens to reveal two draining coolers. When a boat can hit the speeds that the 21SST can, supportive seats are a must. Bullet uses Attwood’s Quad Spring Suspension system for the boat’s bucket seats. Between the seats is a step to the aft fishing deck with another cooler underneath and outboard to port is a grab handle, a good idea on a 100-mph boat.

The high-backed bucket seats have wraparound padding on the vertical sections to help keep the occupants in place. 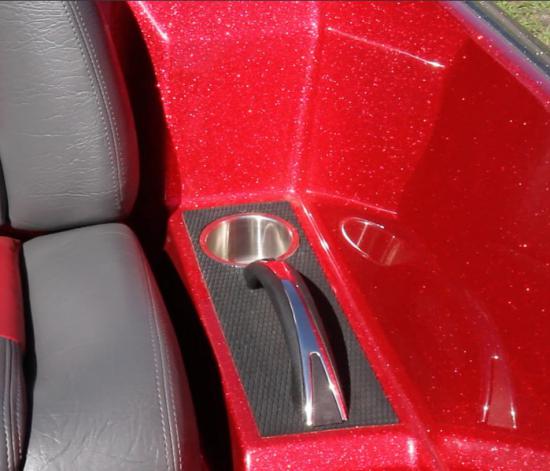 The grab handle is a good idea in a boat that runs this fast. We wouldn’t recommend running faster than about 50 with anything in the cup holder.

The Helm. When a boat runs 100 mph, it’s critical that the driver can keep both hands on the wheel for as much time as possible. That’s why the 21SST is equipped with a Hot Foot gas-pedal-style throttle and turn-signal-style switches for the engine trim and jackplate on each side of the steering column. Bullet equips the boat with SmartCraft digital instruments and there’s space in the center of the dash above the wheel for a fishfinder/chartplotter. Teleflex Sea-Star Pro hydraulic steering is appropriate for the application. 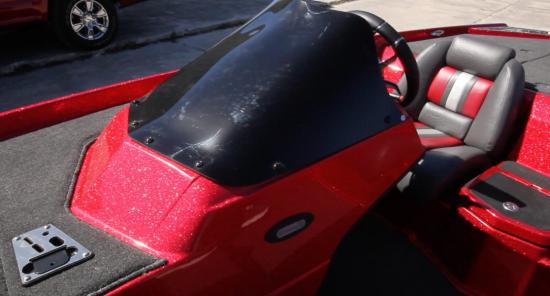 The console provides some measure of wind protection for the driver at high speeds. 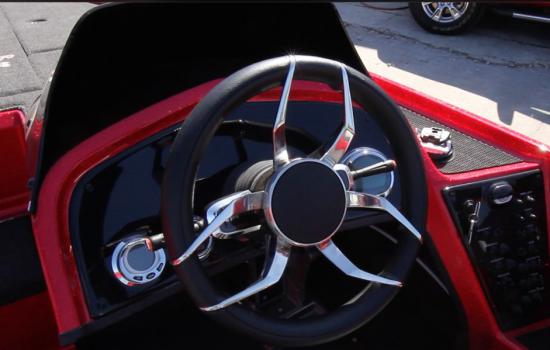 The SmartCraft multifunction gauges on each side of the dash provide all the engine information. 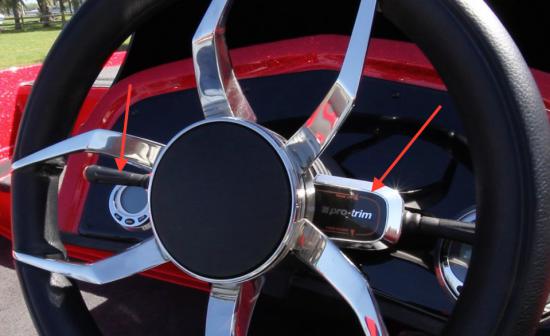 Pro-trim switches on each side of the steering wheel control motor trim and jackplate height. 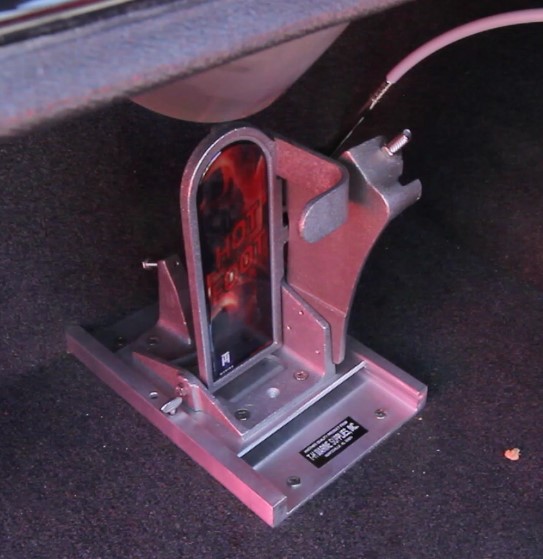 The foot throttle is a smart choice on a 100-mph boat because it lets the driver keep both hands on the wheel. 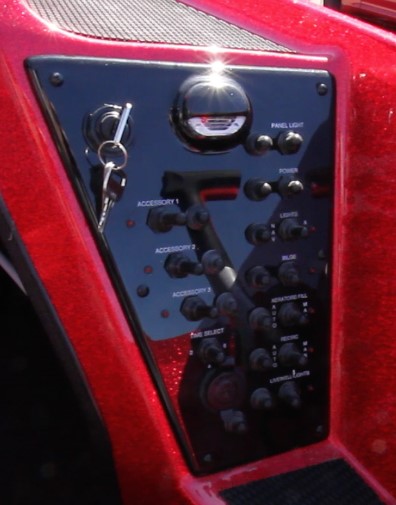 In a dedicated panel to the right of the steering wheel are all the accessory switches and we like the light at the top of panel for night-time operation.

Aft Deck. As mentioned above, the step between the bucket seats leads to the aft fishing deck, which realistically has space for a lone angler to fish. As on the forward fishing areas, the deck is recessed about an inch below the deck so a person can feel the edge with his or her feet. There’s storage beneath the forward outboard hatches. The two forward hatches in the center open the livewells. The aft hatches provide access to the batteries on each side and the fuel tank in the center. All electrical unions are made with Deutsch connectors. 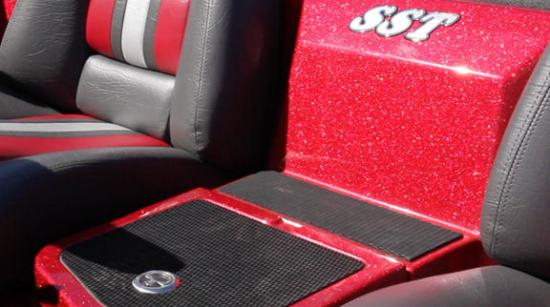 The lid for the cooler between the seats is covered in aggressive nonskid so it can act as a step to the aft deck. 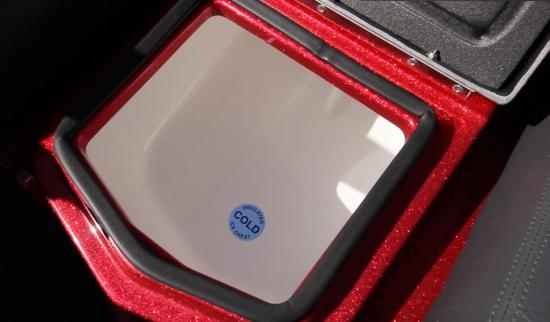 The cooler underneath drains and notice the thick rubber gasket that the hatch closes against.

It’s an easy step up to the aft fishing deck, which can be left open or the fishing seat can be inserted into this socket. 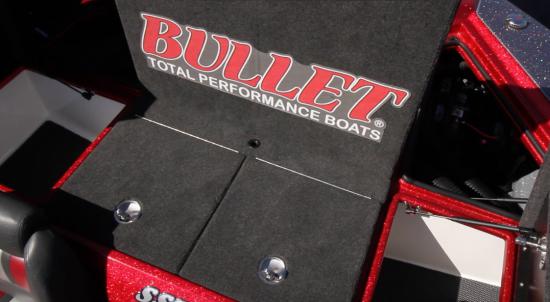 There are storage lockers outboard on each side. Each hatch opens on a gas strut and the compartments have drains.

The livewell has a removable separator plus aeration and LED lighting. We would like to see rounded corners and a blue finish to help keep the fish inside calmer. 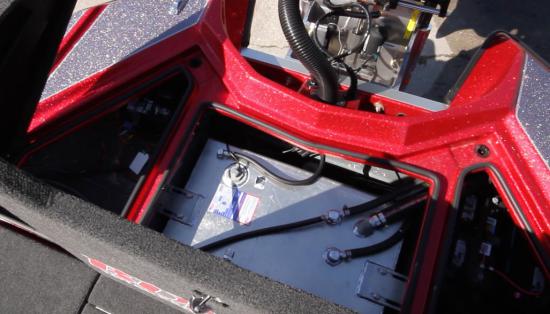 The fuel tank is easily accessed beneath the aft center hatch while the batteries are outboard on each side. The boat comes standard with Pro Mariner three-bank battery charger.

The 21SST comes with a Boatmate tandem-axle trailer with a swing-away tongue, stainless-steel fenders, aluminum wheels, a spare tire and carrier and it’s painted to match the boat.

The Bullet 21 SST rides on a tandem-axle trailer that is designed to fit the hull bottom, which lets the package ride better across the road.

While the 103-mph top speed is definitely impressive, the prop used to achieve those numbers isn’t the one that Bullet actually sells the 21SST with. That was a cleaver design and the boat normally has a four-blade Bravo One round-ear design so expect speeds to drop just below the century mark when propped for all-around use.

Still, this boat is a serious thrill ride and it seems tailor made for Mercury’s high-displacement, lightweight 4-stroke V-8 outboard.

Consumer Caveat. It takes a very experienced and skilled boat operator to run any bass boat at the speeds the Mercury test team was experiencing. With little more than half the cleaver prop and a bit of fiberglass bottom in the water, any bass boat at these kind of speeds can be – dare we say the word? – dangerous.