The last few years many boat builders have morphed their express fishboat models into “hybrids”, “cross-overs” , or most any other name that might entice Mama and the kids aboard to make a sale. They often signal that this is a “dual-purpose” fisher/cruiser in their promotional pictures or at boat shows by putting a queen bed in the bow along with a designer bed spread and a “throw blanket” with fringe on it carefully laid across the bed on the diagonal. That silly “throw” is like catnip to women. But you won’t see any of that on a Cabo. This is an express for fishermen (and fisherwomen) who know that a boat is a sophisticated piece of equipment to get out into the briny to boat slimy, smelly, bloody fish. It is a place where men drink beer, make a mess, and don’t eat quiche. 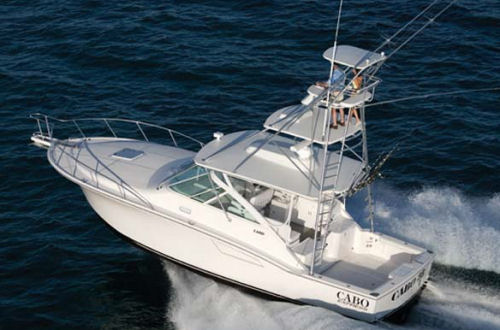 The Cabo 38 Express is a no-compromise, hard-core fishing machine that is designed for speed and an active cockpit.

The Cabo 38 is a very big 38-footer because in the beginning it was intended to replace the Cabo 40. Then the Zeus pod drive came along and Cabo management decided that it would put that propulsion system in the 40. The 38 was rolled out on its own in 2008, just as Lehman Brothers was beginning to swim with the fishes. As a result many people have missed what we consider an ideal-sized fighting machine for the angler who is moving down from an expensive battlewagon, or up from a large center console and who is now ready for the real thing.

The Cabo 38 is designed to appeal to the sophisticated angler by having all of the usual tools at hand to find, fight and successfully boat fish. It is also intended to be small enough with a low operating costs to appeal to today’s buyer. It is also big enough and strong enough so that its owner does not want to worry about getting caught 100 miles offshore in weather. Finally, the boat had to be big enough to sleep four people comfortably – and by themselves! 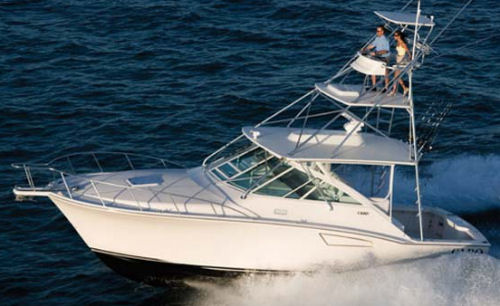 Most Cabo 38s are sold with the optional half-tower and fiberglass hardtop.

After the “all-fishboat-all-of-the-time” feature, several things strike us as setting the Cabo 38 apart from other boats in its class. First, at 15’1” (4.64 m) it is the beamiest boat in its size range. Added beam translates into a lot of things, such as more room in the cockpit, on the bridge deck and below, wider side decks, and increased stability.
Second, the Cabo 38 has a 17-degree deadrise which is the shallowest we found among competitive boats that we checked. That means the boat will be easier to push and all things being equal, go faster. It also means that when trolling or at anchor, the Cabo 38 will not be as rolly as her deep-V friends. 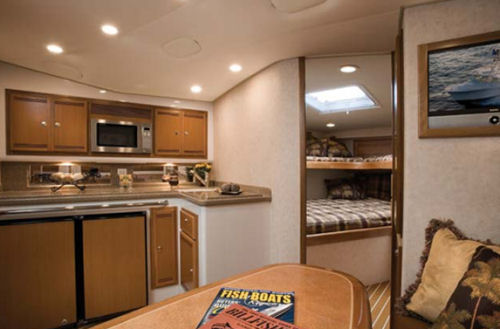 We don’t know who put those pillows with the palm trees on the settee, but someone at the photo shoot obviously didn’t get them memo about this being a man’s fishboat.

Third, is the size of the cockpit. Cabo prides itself on starting the design of any boat it builds in the cockpit, and we are believers. Check out the drawing of the boat with a fighting chair mounted firmly in the cockpit. There is room behind the chair for a mate or friend to guide the chair when a trophy fish is on, and there is also room to pass between the chair’s foot tread and the transom. The wide cockpit means that when there is a strike, people can stay out of the angler’s way in the mad rush to get in baits and clear the decks.
By the way, in addition to a 48-gallon (182 L) live well, cockpit refers, freezers and insulated fish boxes with piano hinges in the deck, the Cabo 38 also has a bait prep station with cutting board. This is something that you will not find on most new huge convertibles, nor will you find it on many large center consoles.
Fourth, the 38 is designed to carry powerful engines, such as the Cat C-12 ACERTS at 715-hp or the R-6-800-hp MANs. These engines are larger than what you might find on other boats in class and they are one reason that the boat is one of the heavier ones in class. Horsepower translates into speed out to the canyons and more time on top of the fish. 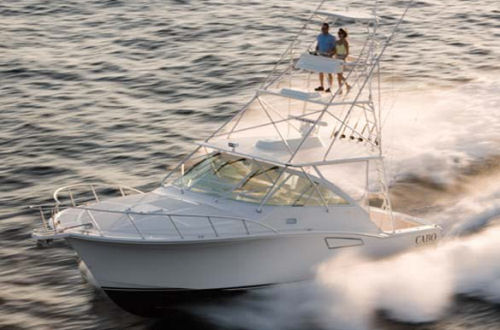 Note the three windshield wipers which is how all boats in class should be equipped. Also note the conventional placement of the engine room air intake. We’d like to have them either higher or tucked under the forward edge of the cockpit coaming, a la Hatteras.

The Cabo 38 was designed by award-winning Michael Peters who has garnered a justified following in the sportfishing community. The hull is made with biaxial stitched fiberglass in vinylester resins that are lighter and stronger than conventional resins, according to the builder. Cabo vacuum-bags its hulls which helps to control the resin to glass ratio for max strength and minimum weight. 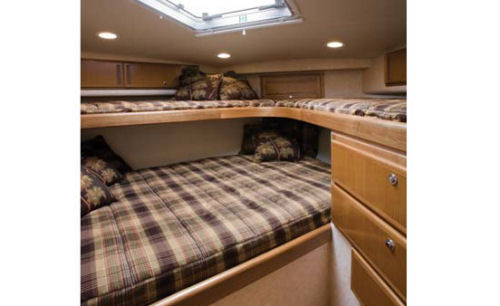 More palm tree pillows; they must have been on sale. We like this versatile layout: Mom and Dad to port in the double and kids up top; or, three fishermen here and the fourth on the settee.

CABO also bonds the running bottom and reinforced fiberglass interior module into one monolithic structure, ensuring greater resistance to torsion and flexure, according to the builder. This is an important feature because it means the liner is not only providing a smooth, finished surface, but also added strength. 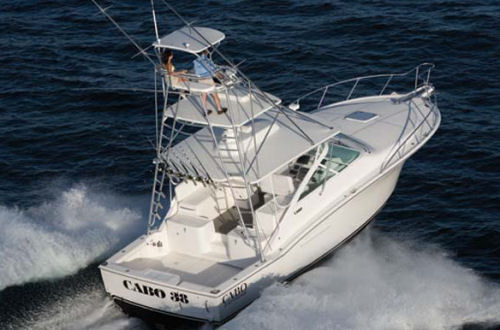 One look at the accommodation plans and you can see that the Cabo 38 is a “guy boat.” Below decks is open and there is room for four men to sleep comfortably. There is 6’3” (1.92 m) headroom in the salon, a separate stall shower in the head, and more counter space in the galley than you will find in most boats of this type. Overall, we score this layout plan as high as any we have seen in class. 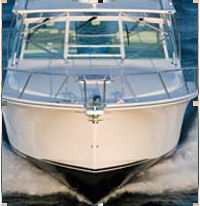 Note aluminum support bars for the hard top bisecting the lower helm’s field of vision. We’d like the pipe welder to figure a way to make the supports not block the skipper’s view. Yes, everybody does it that way, but it’s annoying.

We also like the layout of the bridge deck as it has two bench seats facing forward that can seat four people, plus a longitudinal bench seat for keeping an eye on the cockpit.

Since we have not tested the boat we cannot predict its performance nor its boat handling. Given the boat’s entry, relatively flat bottom at the transom and large engines, there is no doubt that this boat will scoot. We will be more interested in her fuel mileage and her range, because with a 475 gallon (1805 L) fuel capacity, while she carries 75 gallons more than one of her big-name competitors, she also carries from 37 gallons (140 L) to 60 gal. 228 L) less than other express fishboats in class. 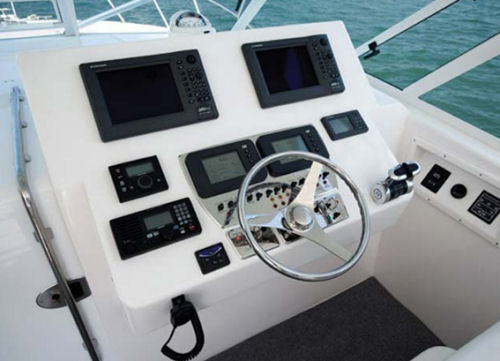 We think this is a well-design helm station: Note air vents on the centerline forward and to the starboard side, VHF mic handy to both skipper and navigator, inset tertiary controls on the starboard bulwark, compass centered on the steering wheel’s hub, hand-hold to port.

Cabo is one of the largest-selling boat brands in class and has developed quickly from its founding in the early 1990s. One reason for its general popularity is its price/value ratio, in our opinion. But, there is more to the brand’s success than that. The fact is that serious anglers like most of the Cabo models and the word has spread over the years. With the collapse of some venerable old names because of the 10% luxury tax in the early 1990s, Cabo was sitting pretty with a fresh outlook, good-looking designs, strong construction, and all the expected fishing features. 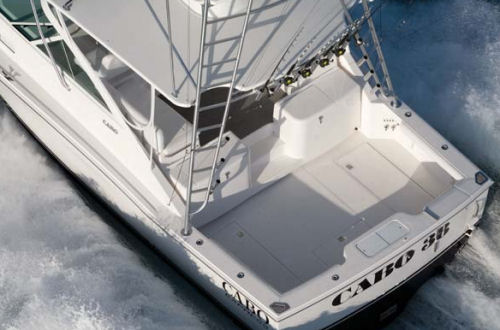 We like the bait prep counter with refer, freezer, sink, etc. all handy to the cockpit. Fish boxes in the deck have gaskets and piano hinges. Live well in transom holds 48 gallons (182 L).

For all of these reasons, plus the weak U.S. dollar, it is little wonder that Cabos sell well in Europe and even in Australia, a country that has some stiff home-grown competition. It is a premier brand name without the real high price tag. For that reason, if you are a serious angler you need to have the Cabo 38 on your short list. If you are really a cruiser at heart, you should probably look elsewhere. 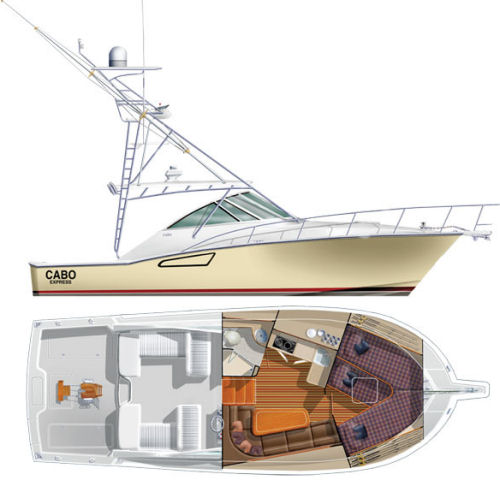 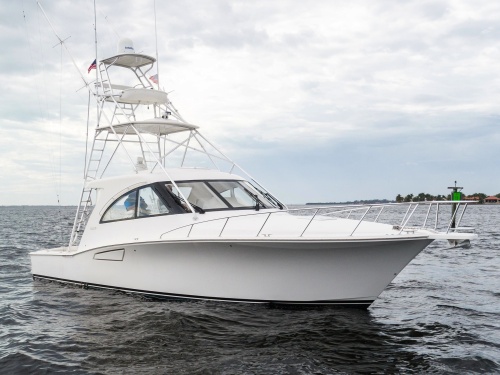 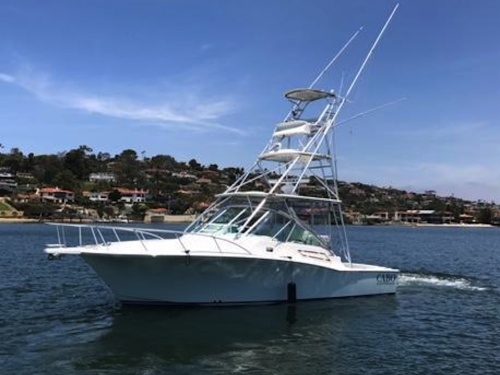 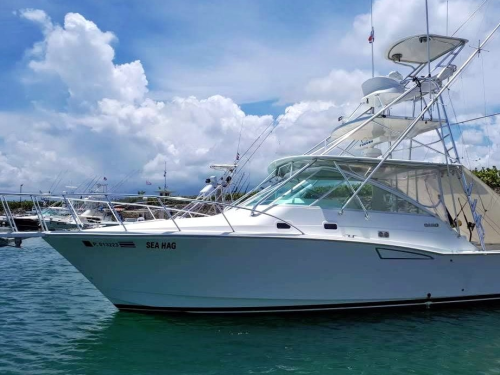 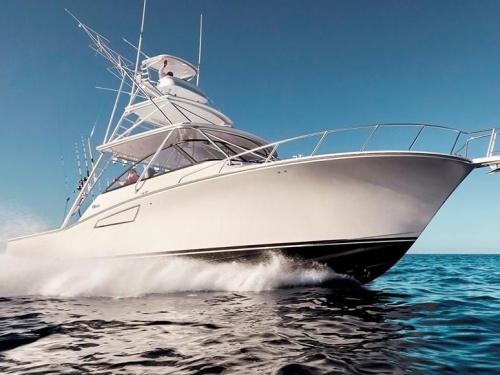