Campion Marine's Explorer 682 Sport Cabin should warm any serious fisherman's heart, especially those not wanting to spend a fortune: In just 23' 7" (7.19 m) of length (25' 8" – 7.82 m – with OB bracket and pulpit), Campion fits in several large fishboxes, a live well, tackle drawers, ample rod stowage, reinforced gunwales for downriggers, toe rails to keep you aboard when leaning over the side to grab a fish and even dedicated stowage for the heavy-duty swim ladder. There are three choices of top, including one with sliding glass windows; choose sterndrive power and you can have a cabin heater just like the one in your truck. Canadian fishermen take their 682s more than 50 miles offshore (next stop: Japan), counting on Campion's first-class construction and rigging to bring them home safely. (Her builder says, "She's a big-water boat!") If you like hunting trophy fish way beyond the horizon, here's more about the 682 Sport Cabin. 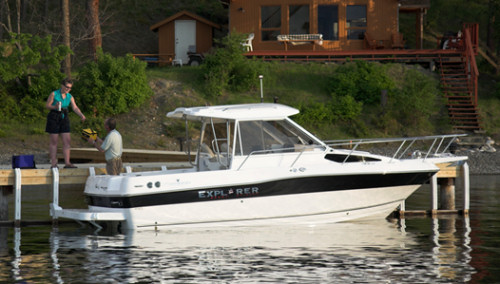 Sterndrive-powered 682s – Campion denotes them 682i – come with a small swim platform on the starboard side as standard, but most buyers choose the optional full-beam aluminum version shown here. It has a bracket for an OB kicker and a mount for a removable dive ladder. The enclosed hardtop here has sliding glass side windows and a drop curtain aft. Bow rails are welded stainless steel.

Five Reasons to Buy a Campion

Campion Marine is Canada’s largest independent fiberglass boat manufacturer. For more than 36 years, the family-owned company has been building luxury cruisers, family runabouts, sport utility, fishing, wakeboarding and high-performance boats in its factory in Kelowna, British Columbia, on Okanagan Lake. Unlike many boatbuilders, who tout bells and whistles as selling points, Campion relies on design, construction and rigging. The company says there are five main reasons to buy a Campion, including the 682 SC:

-- Campion's Apex hull design incorporates a pad aft for higher speed and better handling in rough conditions: When wave-jumping, the boat lands on the flat pad, which helps keep her level; pad-less V-hulls tend to flop onto one side or the other, requiring driver input to stay on an even keel says the company. The pad also keeps the boat on-plane at lower speeds vs. a straight V-hull. 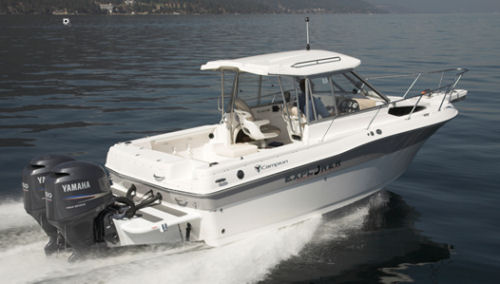 Campion mounts outboards on a bracket as standard, but will transom-mount the motors if the buyer prefers. We think a bracket is the way to go: Not only does it keep the props in the water longer during high-speed running in rough water, but it also provides a platform for swimming or diving. A transom door is standard. Note the stainless-steel mount for the diving ladder and the trim-tab cylinders – tabs are standard.

The fiberglass laminate is comprised of high-tech 3D weave fabrics requiring less resin, which means a lighter, faster and stronger boat. Kevlar reinforcement along the keel adds protection against puncture should you hit something unfriendly. Campion says they are the first boat manufacturer in the world to use Envirez®, a "renewably sourced bio-derived" resin from Ashland Performance Materials; Envirez resin includes a "substantial amount" of soybean oil and corn-derived ethanol in its formulation. 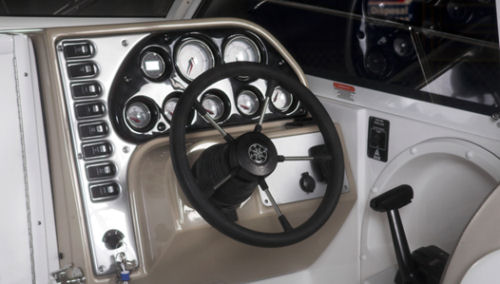 Our first question was, where does the multifunction nav display and/or fishfinder go? Campion says many buyers mount theirs on the dash ahead of the companion seat; the option is on top of the helm or overhead if there's a hardtop. Most mount the VHF overhead, too. A compass and horn are standard, tilt steering optional.

-- Wiring harnesses, with crimped and shrink-tubed connectors, are color-coded, in compliance with ABYC and NMMA standards, and also labelled every five inches, making fault-tracing easy even for the colorblind. Pacific Insight Engineering builds the harnesses. Campion pre-wires all their boats for every available option, facilitating adding things later on.

-- Graphics are molded-in during lamination using gel coats that Campion tests for durability in the often-arduous Canadian weather. We think this is less important in boats like the 682 SC, with simple color schemes – but Campion also builds fancy cruisers and high-performance boats, many of whose owners live for graphics. 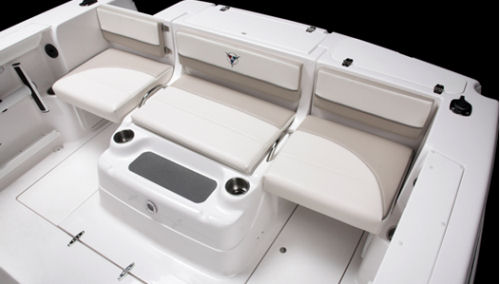 The sterndrive aboard the 682i lives under what Campion calls a "doghouse," flanked by jump seats with tackle stowage under them. The doghouse hinges forward for engine access, has stainless steel grab handles, drink holders and a fire extinguisher port (the fitting on the forward face that looks like a light). Outboard boats have a flat deck and bench seat, and the space where the sterndrive would go becomes stowage. All boats have a pair of in-deck fishboxes that drain overboard, under-gunwale rod racks and toe rails. Note the dive ladder stowed under the starboard gunwale, too. There's a live well in the transom, and the gunwales are reinforced for downriggers.

A boat the size of the 682 SC isn't going to have a lot in the way of a cabin, but Campion fits as much as they can belowdecks. We like the Vacuflush toilet under its own hatch to starboard rather than placed amidships between the V-berths, so folks heeding the call of nature at night don't have to wake their bunkmate. The galley, opposite, has an icebox, sink and one-burner butane stove; a dual-voltage refrigerator is optional. Many 682s are sold to charter captains who opt for shore power and the reefer, using it to store bait overnight. An electric stove is also optional. 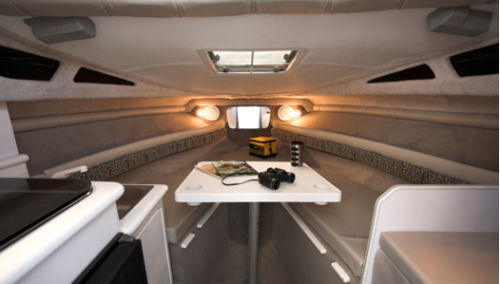 The cabin table can lower to create a double berth, or be stowed in a hanging locker abaft the head, to starboard under the cushion. There are shelves along each berth, and lights at the head. The mirror opens for access to the chain locker, and there's stowage under the berths. The grey boxes P&S overhead cover the wiper motors – Campion installs high-end pantographic wipers as standard.

We'd probably power our 682 SC with outboards, but for cold-weather operation a sterndrive with the cabin heater option would be attractive. The heater works like the one in your truck, off the engine's heat exchanger. Combined with the glass-enclosed hardtop, the heater will keep both cabin and pilothouse warm in any weather sensible folks will be using their boats.

Power can be single or twin outboards; Yamaha's new 300-hp V6 is a good choice, according to Campion, partnered with a kicker on the bracket for trolling or emergency propulsion. We haven't tested the 682 SC, but the builder says 300 horses, whether in single or twins, will push her to "around 50 mph."
Campion will install gasoline sterndrives from Volvo Penta or MerCruiser, 5.0L or 5.7L, single- or dual-prop outdrives. European buyers prefer diesels, so both Volvo Penta and Cummins MerCruiser diesels are also available. According to the builder, the Volvo D3-220 works especially well. For complete engine options, contact your Campion dealer. 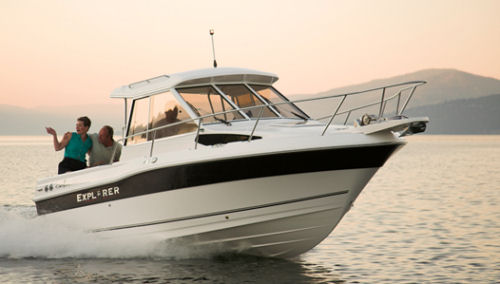 Fishing boats like the 682 Sport Cabin work for more than fishing -- they make fine dive boats, camp cruisers and so forth; some folks like them for sunset cruises on the lake, too. Most are also at the top of the price range, especially if you want one from a first-class builder. Campion manages to keep the bottom line under control, somehow. Inside Passage, anyone?

Folks shopping among Campion's prime competitors, such as Grady-White and Boston Whaler, know that first-rate fishboats usually command high prices. But Campion has managed to combine excellent quality with reasonable cost: The outboard-powered 682 Sport Cabin starts at $46,486, less power; the sterndrive 682i, $59,181 with a Volvo Penta 5.0GXi, the lowest-price option. Naturally, in either case you'll spend more: You'll want a top (we recommend the hardtop with glass windows), dual batteries, maybe a windlass, and so forth – and outboard boats need a motor, too. But even loaded, the 682 SC should still come in at a very attractive price.
We think if you're looking for a well-built, well-equipped fishing boat in this size range, you should look at Grady-White, Boston Whaler and some others -- but also at the Campion 682 SC. You might be pleasantly surprised at what this respected Canadian builder can deliver.