The Carolina Classic 28 has long been the David to the gold-plated Goliaths of the offshore sportfishing world. But like the biblical David this boat is not cowed by the big guys and increasingly anglers are beginning to understand the advantages of down-sizing. And when they do, they discover precious few boats without outboard engines on their transoms -- the very place they want to be battling game fish. Likewise, owners of center consoles looking to move up to go farther offshore are looking for range and increased safety without breaking the bank. Let's take a look at the classic Carolina Classic 28. 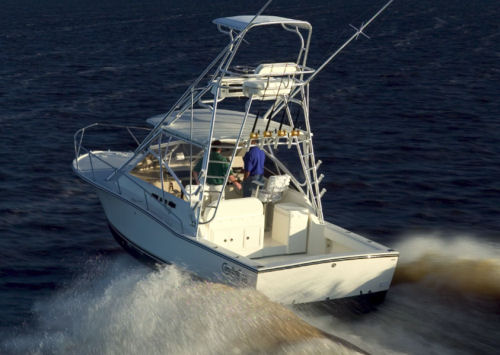 Inboard-powered express fishboats under 30' (9.14 m) have almost become an endangered species. But the Carolina Classic 28 is still going toe-to-toe with behemoth battlewagons offshore for big game.

The Mission of the Carolina Classic 28

Carolina Classic’s founders designed the 28 to be a mighty little express fishboat that could run offshore in any weather in relative comfort and have good range – enough to get to the canyons off the New Jersey coast, to say nothing of the Continental Shelf off North Carolina.

She is intended both for the angler trading down from an expensive sportfisherman or convertible who has grown tired of the maintenance and operating costs of a big vessel that is only used for day fishing. She is also intended for the keen center console owner who wants to venture far offshore for billfish, but who no longer wants to travel into blue water in a boat without a foredeck. Finally, she is dedicated to boaters who want inboard power for reasons of fuel efficiency, safety or simply to clear the transom of engines or lower units that get between the angler and his prey. 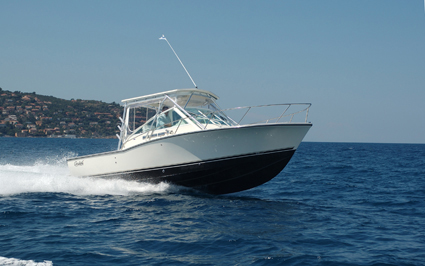 Carolina Classic will fit an optional hardtop without the tower if desired.

With the demise of several inboard boat builders in the early 1990s because of the 10% luxury tax on new boats, in addition the latest recession, there are only a few boat companies left building inboard express fishboats under 30’. Of the dozen boats in class we studied from production builders only three fishboats were inboards.
●

Since most express fishboats in this size range are outboard powered, anglers who want to take large billfish will appreciate bringing a fish to wire in an inboard-powered boat.
●

Carolina Classic is one of the few companies who will give buyers the option of installing a sterndrive using jackshafts. It draws less water and is more efficient than inboard power, but it weighs more and has many more moving parts.
●

This is a number that can't be found on the Carolina Classic website; 13,500 lbs. (6,136 kgs.) makes her far and away the heaviest boat in class. The bad news about this is that it makes her a bit harder to push. The good news is that the added weight makes the ride more comfortable offshore, more stable at rest, and the weight combines with her beam make her less rolly when drift fishing.
●

By having the engine iron low in the middle of the boat rather than hanging off the transom, the boat’s center of gravity is lowered and moved forward. This makes the boat more stable in all conditions, something that the person in the half-tower will appreciate as well as the rest of the crew.
●

At the transom the 28’s deadrise is 24-degrees, the same as high-performance, offshore racing hulls.
●

Because the engine weight is in the middle of the boat, when traveling fast in sloppy seas the 24-degree deadrise boat can better tame the waves and give a better, less bouncy ride.
●

Careful observers will have noted that during the last number of years virtually all builders of fishing boats are marketing them as “family cruisers”, spending money on designer fabrics and creature comforts designed to appeal more to landlubbers. Carolina Classic is having none of that. Its boats are made by anglers for anglers. 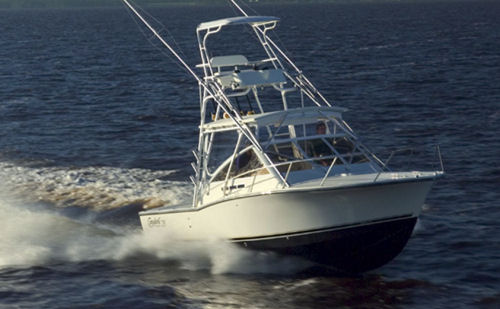 The Carolina Classic 28 has significant range for such a small boat, particularly with diesel power.

North Carolina’s Outer Banks is within striking distance of the world-class game fishing to be had off the Continental Shelf where the Gulf Stream meets coldwater eddies from the north creating an ideal habitat for bait fish right up the food chain to giant tuna and record billfish. For generations wealthy anglers from all over the world have come there to have the thrill of a lifetime. In short, that is why North Carolina is the epicenter of fishboat building of all sizes and types.

While most Carolina builders started with big boats then ended up building even bigger ones, Carolina Classic has done just the opposite. Founder Mac Privott's vision right from the beginning was to build strong, capable small boats so that more people could afford to do battle offshore along with the white-shoed swells. By building a boat that maxed the size of the cockpit, could handle big seas, and had prodigious range, the 28 could hunt most anywhere for a fraction of what those big Outer Banks boats cost.

In our opinion the Carolina Classic 28 is one of the most ruggedly-built boats in class. It is certainly the heaviest at 13,500 lbs. Her bottom is solid fiberglass. Her stringers are robust, her forward cabin is solid and thoroughly glassed to the hull sides to create the kind of structure that can bash through the green stuff offshore. All of this adds weight. 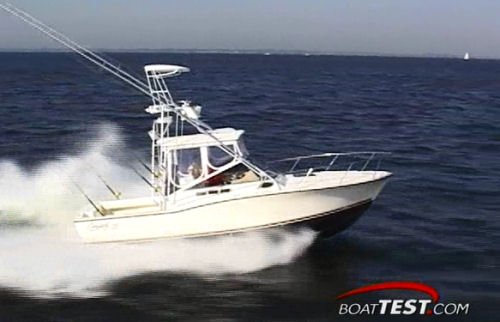 Carolina Classic will customize the boat as much as it can to fit the requirements of its customers.

It measures nearly 7’10” fore and aft by 10’ wide. That’s about 78 square feet of uncluttered deck space. For those wanting to add a conventional fighting chair with foot rest, there is room.

No outboard motors in the way. No sterndrive lower units to snag lines. Standard trim tabs are recessed into the hull bottom. Props are under the boat where they belong.

This compartment can be used for several purposes including being an optional large live/bait well. (Big bait for big fish.)

There are two fish boxes in the cockpit sole that each measure nearly 5’ x 1.5’ and have a capacity of 160 quart each. These boxes are drained with diaphragm pumps that are more reliable than macerators, according to Keith Privott, vice president of the company. Freezer plates can be added.

Back down and do not worry about water coming through the scuppers. 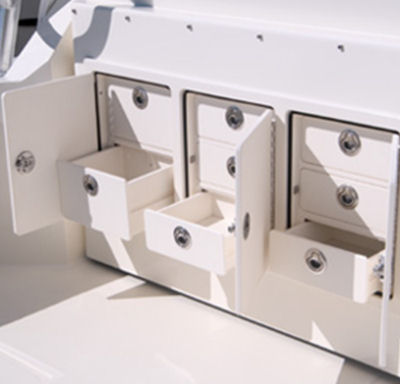 The bench seat on the helm deck is forward facing with tackle centers in the aft or cockpit side.

To starboard there is a top-loading tub that can be used as an ice box rather than storage. On top is a removable cushion. Of course it’s a great place to sit while trolling.

The Carolina Classic 28 also has virtually all of the smaller fishing details that anglers have come to expect such as racks under the cockpit gunwales for rods, gaffs and nets. To port under the aft-facing bench seat is a cabinet that holds 14 Plano tackle boxes. There are four rod holders in the gunwales, hawse pipes in the stern to run mooring lines, fresh and saltwater wash down bibs, etc.

As different folks will use the boat for different strokes, the builder will do custom work so long as it does not interfere with the basic aspect of the boat. It also makes a number of options available—
1. Live bait well in transom
2. Tuna half-tower with hard top and rocket launchers
3. Long range fuel tankage for diesel
4. Fighting chair with foot rest
5.Coaming pads for cockpit

The engine room of the 28 is under the bridge deck. Push a button and two hydraulic rams tilt the deck, helm, bait prep station, and the cooler up about four feet. Once open, it becomes immediately obvious that things are tight in here, even with the 10'6" beam. Nevertheless, there is enough room for all of the required equipment, including room forward for a generator. The engine options have been selected with care for reliability, vendor customer support, and convenience of fluid checks.
We like the double ram lifting system that is used on the 28 and the unit does lift high enough to give access to the entire engine. Getting to the front of the engines involves some thought, but it can and is done. This is perhaps the biggest compromise on this Giant Killer, but an unavoidable one and certainly better than alternative engine access schemes.
Standard equipment that is noteworthy found in the engine room includes—
●Algae-X fuel system on diesel installations
●Acoustic and thermal insulation
●Automatic fire suppression system
●Auxiliary fuel filter/water separator
●Seawater intake strainers
●Dripless shaft logs 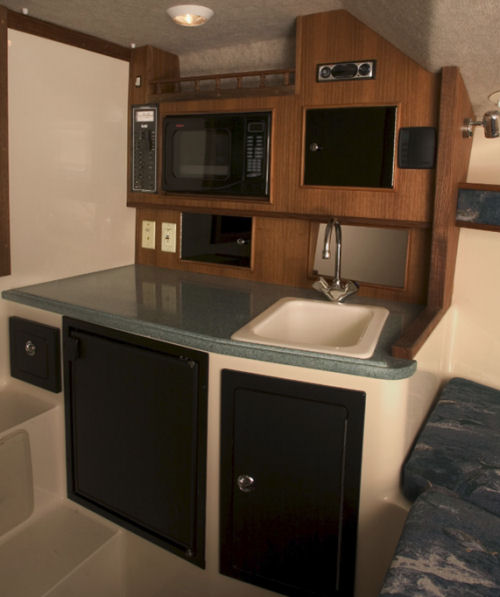 The galley on the 28 is a combination of fiberglass, Corian and teak. A stove top burner is optional.

As we implied above, the most important thing about this 28’ fishboat is the fact that it has a fore deck. Green water coming over the bow 100 miles offshore will hit the raised windshield coaming and windshield itself and be thrown aside. Any water rushing down the side decks can easily be handled by the self-draining scuppers in the cockpit. While the cabin below might be a secondary consideration, it is certainly a welcome addition to any long-range fishing boat.
Below, the Carolina Class 28 is set up for day-fishing and has a table forward surrounded on three sides by seating. The table drops down and filler cushions are provided for sleeping. The enclosed head is a wet head and about the size one would expect on a 28-footer. To port is a galley with microwave, sink, refrigerator and an optional Corian counter. A teak and holly sole is optional.

We have not tested the boat so we can offer no guidance as the boat's performance, handling, running angle, turning capability or generality utility.

However, this boat has been around enough that it is pretty well known along the docks that her top speed will be in the low to mid 30 knot area and her best cruise will be around 26 to 28 knots. VP Privott tells us that with the diesel engines, at best cruise, the boat can get as much as 1.60 smpg which gives her a range of 368 statute miles with a 10% fuel reserve.

The Carolina Classic 28 has an MSRP base price of around $160,000 with the twin gas 375-hp Crusader engines. The twin Volvo Penta D4 300-hp engines will bump the price to around $210,000. Options such as the half tower, livewell, and electronics will all bring the boat up to the mid $200s.

The Carolina Classic 28 is built to go out the Oregon Inlet through Carolinas Outer Banks and continue east to the Continental Shelf or 120 miles offshore to the Jersey Canyons.
Her biggest negative is also undoubtedly her biggest positive -- she is heavier than her competition but that is why she is so strong, stable, and according to one of our test captains, rides so well. That heft and seaworthiness is her most important attribute, followed closely by her large cockpit. There are not many boats this size that can carry a fighting chair. 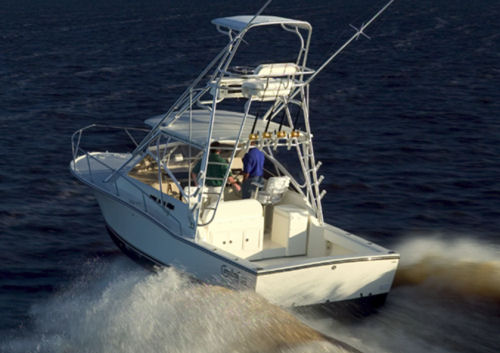 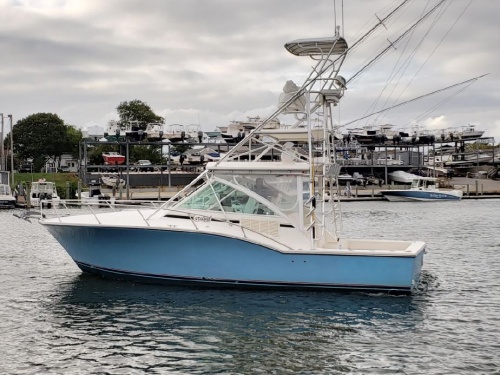 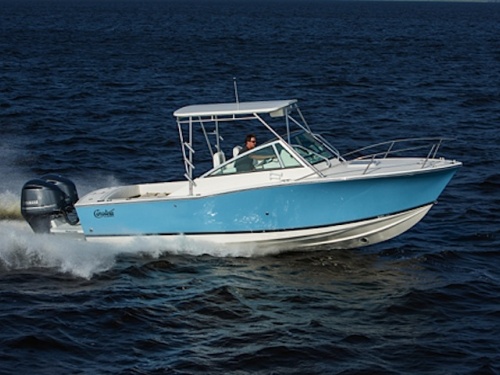