The Chaparral 227 SSX Surf has a bottom design, ballast system, Malibu Surf Gate™ and a Medallion touchscreen at the helm -- all focused on making her an ultimate wake-surfing platform. The Malibu Surf Gates™ on each side of the hull can be opened depending on which side of the boat a surfer wants the wake enhanced. The cast-aluminum folding arch is standard, as is the Forward Drive, which has forward facing dual props on its sterndrive lower unit. 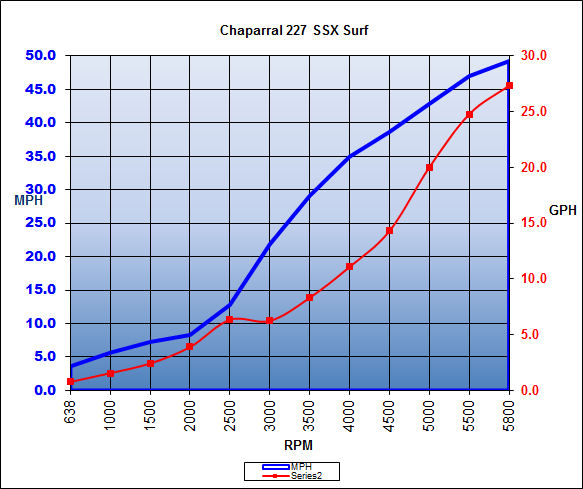 Mission Statement. With the word “Surf” in the model name, the mission of the Chaparral 227 SSX Surf is pretty clear. The boat has a bottom design, ballast system, wave-making appendages and a touchscreen at the helm all focused on making the 227 SSX Surf an ultimate wake-surfing platform. It also has the amenities and luxury that we’ve come to expect from Chaparral. And since it’s a 227 SSX it still has the features that bring family fun and dayboat comfort to the table making this a true crossover platform in every sense. 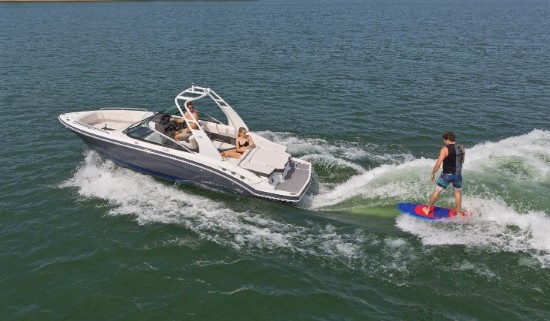 The 227 SSX Surf measures 23’ (7.01 m) long with the swim platform that extends aft over the Volvo Penta Forward Drive. 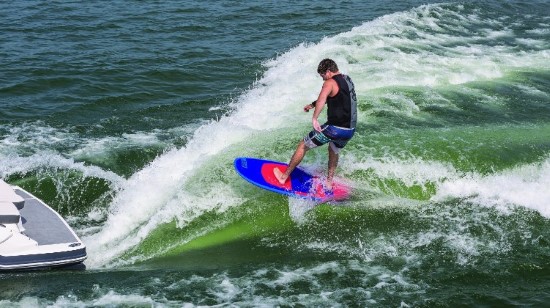 The Surf-Gate System provides custom wakes at the touch of a button, and oh what a wake it creates. 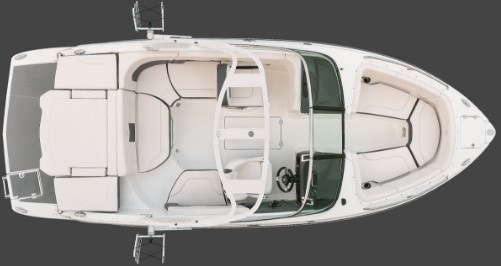 From above, the 227 SSX Surf looks more like a traditional bowrider. 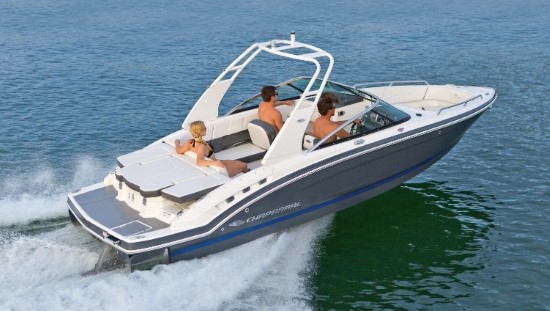 Acceleration. The modified Extended V-Plane hull had us on plane in 3.2 seconds and we accelerated to 20 mph in 6.1 seconds and to 30 mph in 8.3 seconds.

Handling. On our test day, we had flat calm conditions and the boat handled well with the sprightly turning we’ve come to expect from the Volvo Penta Forward Drive. Minimum positive trim is required to get the boat to a comfortable cruising attitude and in turns she tracked well.

Now we said that she has a 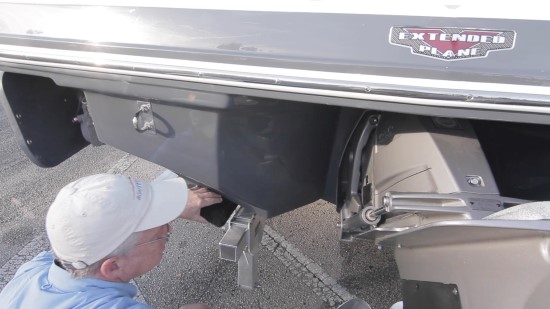 Here we can see the hull extending from the transom where the outdrive is mounted as with the normal Extended V-Plane running surface. But notice how it provides a bevel to add buoyancy when the bow is riding high as lower speeds. This gives it lower planing speeds for wake surfing.

Now that Creates a Tradeoff. Chaparral spent years creating a hull design that performs perfectly at cruise speeds, but slow things down and things change. Now we enter a realm where superior handling is pushed aside in favor of the “perfect wake.” Now that’s not to say the handling is poor, but we did notice some chine walk in hard over power turns that really occurred only when a heavy-handed test captain was at the helm. During normal maneuvers, it doesn’t occur. And that seems to be the extent of the tradeoff.

Touch and Go. It doesn’t get much easier to set up a boat for wake surfing than using the Medallion Viper II Touchscreen on the 227 SSX Surf.

1. Start by pressing the Surf button (looks like a cresting wave), third down from the right, to bring up the surf control page.

2. Press the “fill all” button and the ballast fills up.

3. Next, move to the left side of the screen and select the up or down arrows to input the desired speed

4. Press “Cruise” just above the up arrow.

5. Go to the Surf Gate section to select which side the wake should be on.

Now simply put the throttle in gear, to take the slack out of the line, and throttle up. The computer will control the speed, open the proper gate and you’re ready to surf. 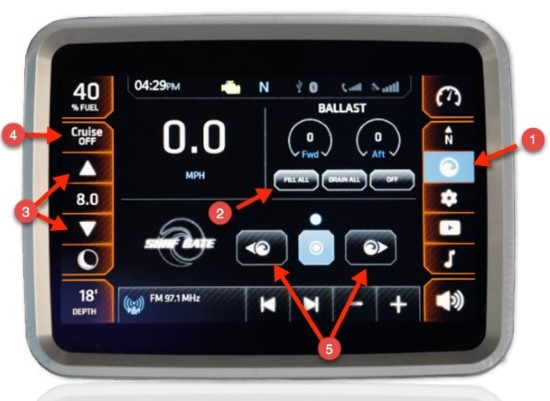 In addition to providing full control of the boat for wake surfing, the Medallion Viper II Touchscreen monitors engine health and even turns up the stereo volume.

With this system, not only can we fully automate the process of creating a pro-level wake, we can just as easily swap the wake to opposite sides with the touch of a button and a 5-seconds transition, enough for the surf gate to close on one side, and open on the other. No draining ballast to one side and filling the other… no transferring passengers from one side to the other.

Frankly, it’s the easiest system we’ve seen. And the most effective.

In the 227 SSX Surf’s dash panel, the Medallion Viper II touchscreen is flanked by multifunction digital instruments with accessory switches in columns outboard on each side. An upholstered eyebrow shades the panel and gives the helm an upscale feel. The steering wheel tilts and is wrapped in a protective cover. The digital shift and throttle control is on the starboard gunwale. A high-backed bucket seat with a flip-up bolster provides the captain with good support and comfort during a long day of pulling wake surfers. 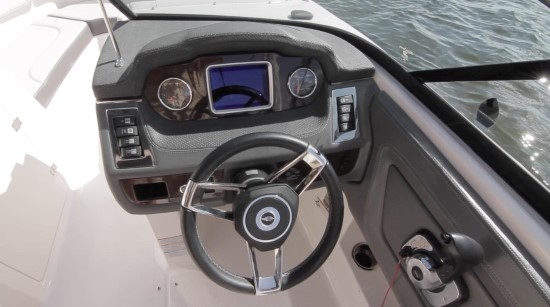 The hand-wrapped and sewn helm console looks like one found in a luxury automobile. 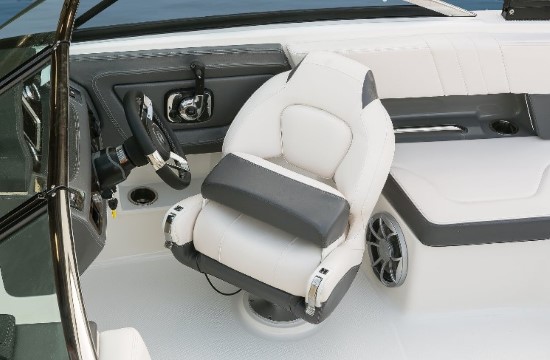 The driver’s seat swivels, adjusts fore and aft and has a fold-up bolster.

Port Console. The port console has a deep and lockable glove box. Two beverage holders are to either side with an accessory plug above to one side and an MP3/USB port to the other. A gate secured into the console can be used to close off the bow section. The walk-thru windshield is capped with a stainless-steel top rail. 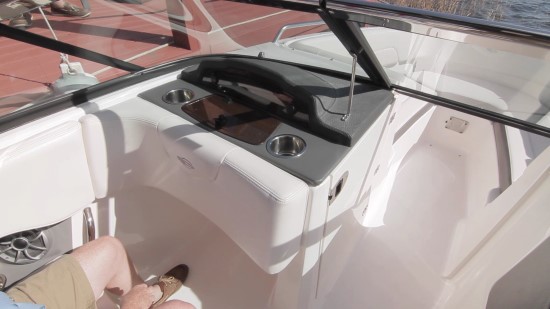 The port console has plenty of storage, a wrap-around bolster and a comfortable bucket seat.

The Cockpit. Wake surfing is a group activity so the 227 SSX Surf’s cockpit has capacity and versatility. To port across from the helm, the backrest can be set up so that a passenger can travel facing forward or it can flip forward and lie completely flat. In this manner the console bolster becomes the backrest to an aft-facing observer’s seat.

The lounge wraps all the way across the stern to the passageway to the swim platform. Abaft the driver’s seat there is another small bench. When it’s time for the surfers to refuel with a snack, a standard table installs on a side-mounted base. Overhead, the boat comes standard with an arch tower that folds down when necessary to clear a bridge or create more space in the marina rack room. 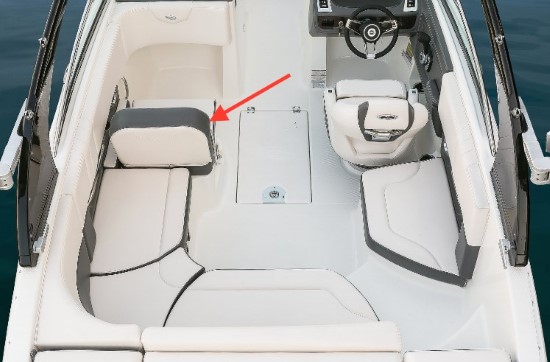 In this photo we see the seat at the port console set up for forward-facing travel. 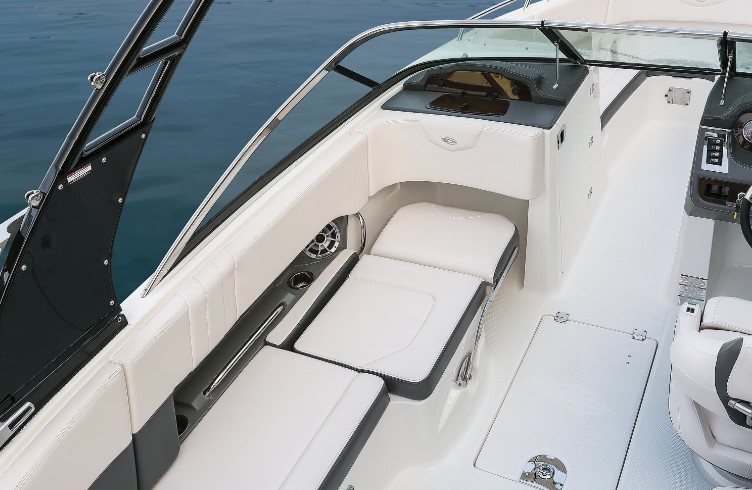 The backrest can also swing all the way forward and lay flat. Notice the wraparound contoured bolster then becomes the backrest. 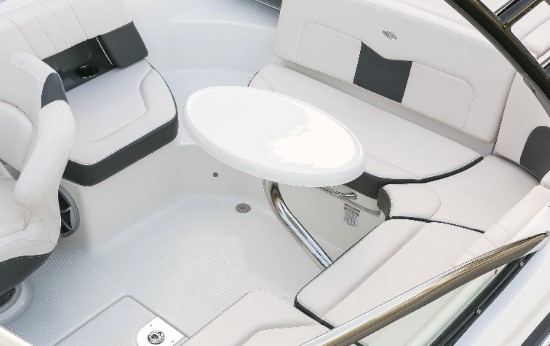 The table is within reach from any seat in the cockpit.

Cockpit Storage. Between the helm seat and port side lounge, a hatch in the cockpit sole opens a large ski and board locker and when it’s time to pull the boards out the ballast storage bag is right underneath.

Under the forward port cushion there’s a molded draining compartment and beneath the outboard pads on each side are lockers that have rubber mats lining the bottom. Aft, there’s a small locker above the engine compartment hatch, which opens on twin gas struts to provide access to the motor and accessories. 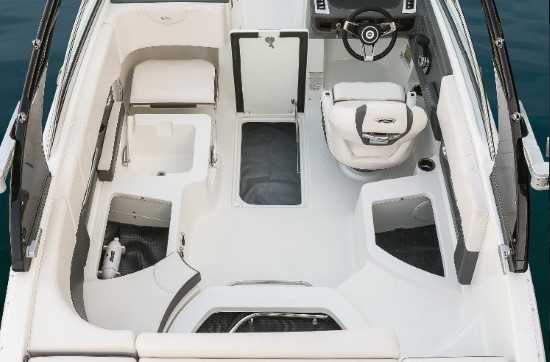 Chaparral provided storage beneath all the cockpit seats and in the large under-deck ski locker. The engine hatch raises on twin stainless-steel gas-assist struts to provide good access to the V-8.

The Stern. Because the 227 SSX Surf is intended for wake surfing, the stern is an important part of this boat. To starboard, the outboard cushion of the sunlounge is hinged and tilts up to provide easy passage to the swim platform. There is a storage compartment in the passageway.

To port, the cushion is also hinged and, when raised, it uncovers the dedicated locker for the 25-quart (24 L) carry-on cooler. Aft, the swim platform has a four-step boarding ladder in its own locker to starboard. 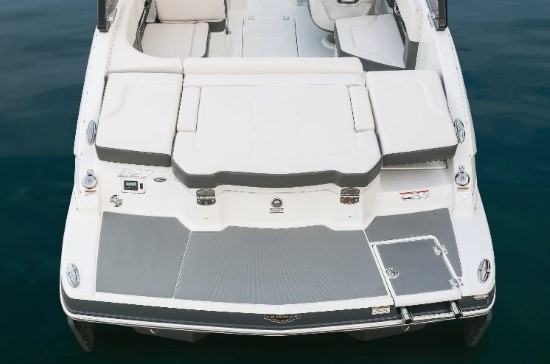 With all the cushions flat, the sunlounge spans the boat’s beam, providing a comfortable spot to catch some rays. 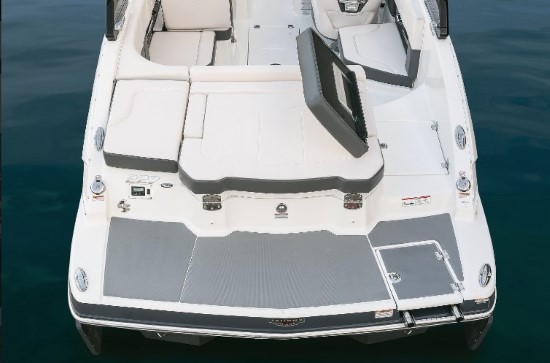 When the time comes to surf, the hinged cushion to starboard provides convenient passage from the cockpit to the swim platform. 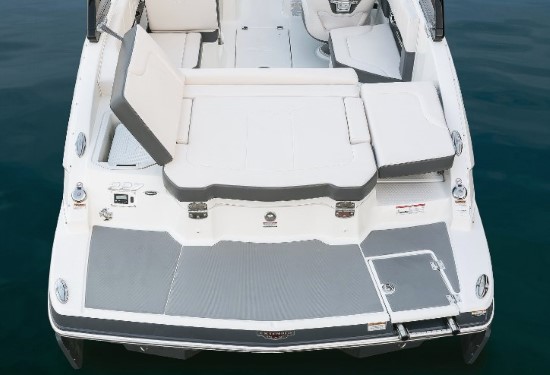 The portside cushion tilts up to reveal the dedicated compartment for the carry-on cooler. Note the swim platform finished in the optional Plasdeck swim platform mat in silver.

The Bow. Checking out the other end of the 227 SSX Surf, the bow has twin forward facing lounges and backrests that fully wrap around the bulwarks. There are stainless-steel rails and cupholders plus a mount for the table. Each outboard bottom cushion pulls aside to access storage in lockers lined with rubber mats. In the foredeck we found two 6” (15.24 cm) pull-up cleats, a four-step beach boarding ladder in the anchor locker and a rotate-up navigation light. 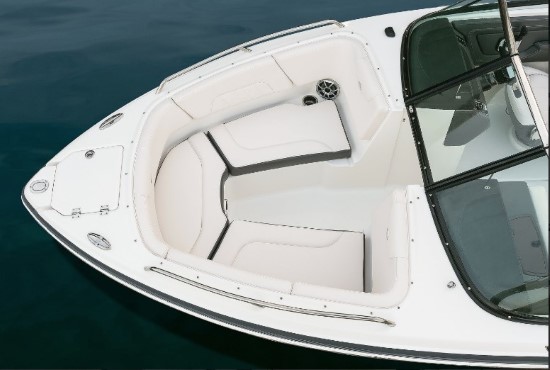 The bow seating area appears to have good depth and the cupholders are down low to keep empty cans and bottles from blowing around. 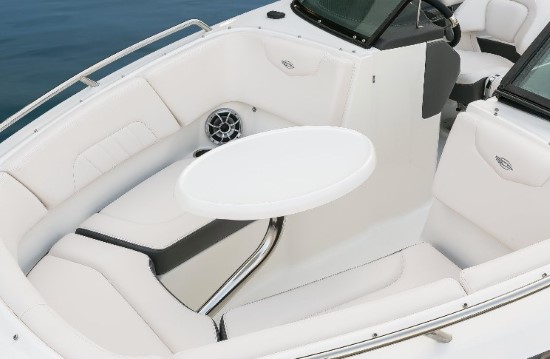 The table secures in the boat and the location of the sidemount base provides better legroom than one that would install in the deck. 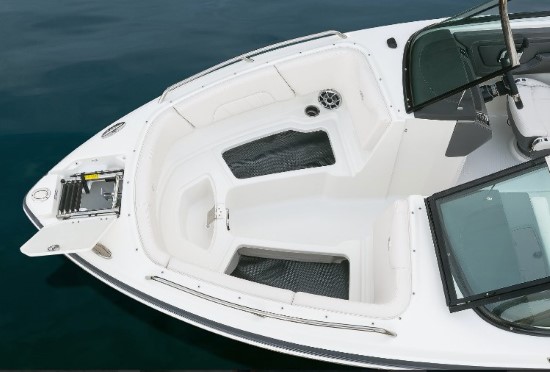 There’s dry storage outboard on each side and the centerline cooler, forward in the bow, is insulated and drains overboard. 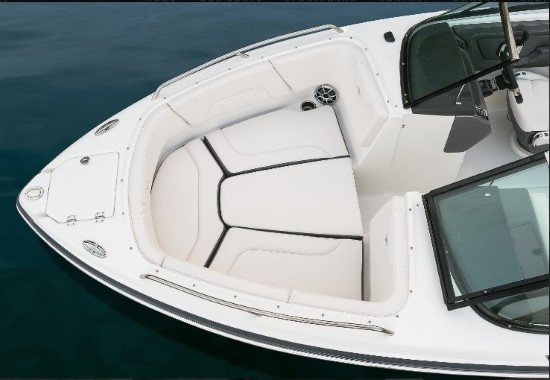 The bow filler cushion is an option that turns the area into a large recessed playpen or sunlounge. 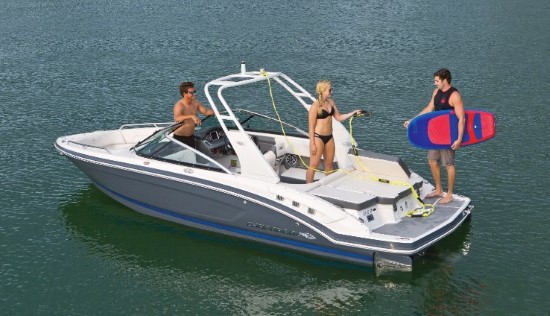 The Chaparral 227 SSX Surf comes standard with everything a surfer needs to start shredding right away.

Few people would expect a non-towboat manufacturer to build a surf-specific model, but Chaparral has pulled it off by designing the 227 SSX Surf’s bottom specifically for the purpose, equipping her with the Surf Gate System and by teaming with partners Volvo Penta and Medallion to make the boat work quite well, in our opinion.

We also think this boat has some distinct advantages over the inboard-powered ski/wake boats. Essentially, they are one-trick ponies that generally lack the versatility of the 227 SSX Surf because it also can perform as a well-rounded sport boat. It can also venture into larger bodies of water because of its bow design. 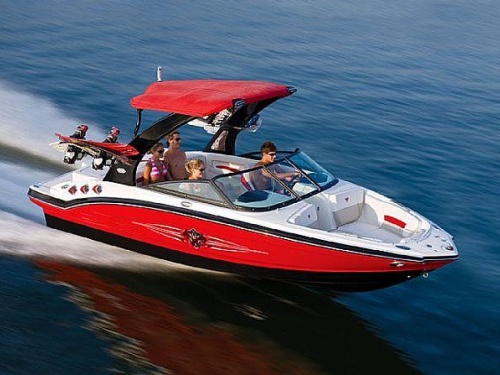 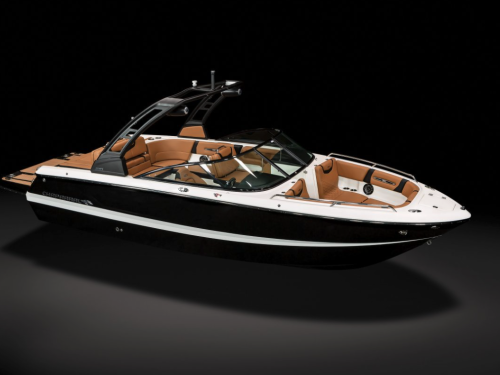 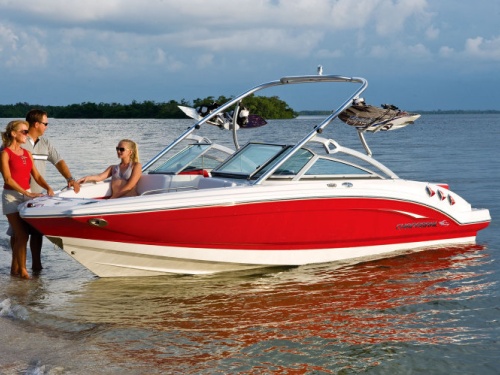 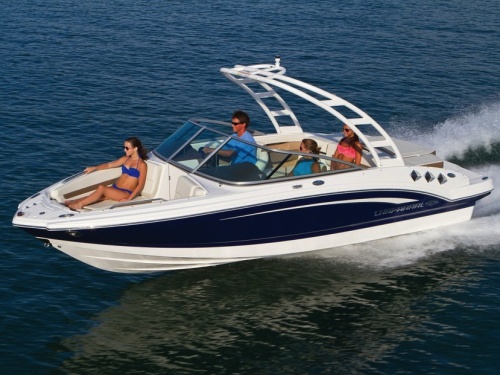