The Concept 4400 Sport Yacht is two boats in one: Aft, she's a center-console, with fishing and day-cruising amenities; forward, she has an air-conditioned cabin suitable for romantic weekending a deux or taking longer fishing trips through the islands. Designed by a top naval architect whose boats have won a string of trophies, and custom-built to high-performance standards by a fussy boatshop near Miami, the 4400 is a capable offshore speedster, too: Her builder claims speeds over 60 mph (96.6 kph) with triple 300-hp Mercury outboards, faster with maximum power, 1,400 horses. Folks looking for a boat able to wear two hats should give her at least a once-over. Or maybe that's three hats: The 4400 also comes as a Coupe. 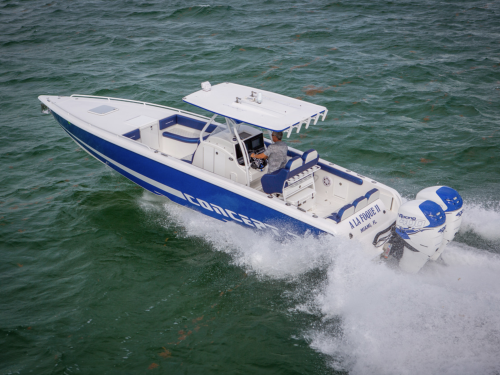