We have some good news and bad news about the new Fleming 58: the good news is that the new 58 will have just about everything that you wished the older 55 model had. The bad news is: the first one will not be available until the end of 2012. Designed for the cruising couple that likes comfort, a turn of speed when necessary, and has three staterooms including a full-beam master, the new Fleming 58 is sure to be the boat of choice among a lot of veteran cruisers.

The late, yachting legend Carleton Mitchell was as responsible as anyone for championing the concept of long distance powerboat cruising in comfort. Once he gave up his career as a winning sailboat ocean racer, he went trawler cruising through the Caribbean and after a couple of boats over the years ended up in a 58' long range cruiser. Mitch liked his comfort, but he was always careful in both sail and powerboats not to get too much boat, even though he could afforded most anything he wanted. 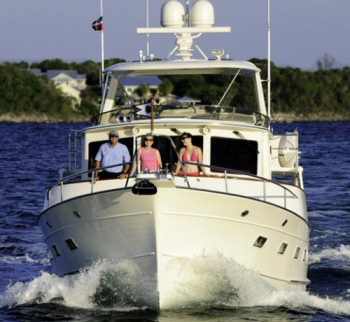 How cool is this picture of a Fleming 55? The three people are standing behind it's Portuguese bridge. With Sat TV and Sat Internet domes mounted behind the wide array radar it is obvious this boat is ready for serious cruising.

We think that if Mitch were alive today he would like the 58 because it has all the amenities needed for gracious cruising long distances with another couple, but can be easily handled by two people, and even single-handed upon occasion. This is a boat to power from the tropics to the far north and everywhere in between. It is not a boat for just putt-putting around close to home -- unless you just want to look at the sheer beauty of her lines.

Fleming felt that it was losing sales to some of its competitors because they had full-beam masters in their 50-something trawlers. Unfortunately, the Fleming 55 just could not be built with such a stateroom. When the 55 was introduced in 1986 it took the industry by storm because of her graceful lines, Portuguese raised Pilothouse and, oh, so much teak below.
In those days, buyers were not bothered that the master stateroom was in the bow. But as time went on and new boats came out with a full beam master in the '90s and 2000s, people found themselves wishing for some changes in the 55.

Option B is the layout with the full-beam master in the most comfortable place on the boat. Note the stairway down from the pilothouse leading to all three staterooms.

The Fleming 58's beams is 17'6" (5.3 m) which is a traditional width for a boat of this size. The extra 1'6" (.45 m) of beam that the 58 will have pays off all over the boat. The galley is bigger, both the lower and the upper helm have a companion /navigator seat next to the captain's chair, and all of the staterooms below are larger, even the one in the bow. The engine room is larger making it easier to get between the saddle tanks and the outboard sides of the engine, as well as more convenient to fit two generators.

Once you have experienced a walk-in, stand-up engine room you will never want to go back to the crouch and squat kind. It is with boats that are about 55 in length that you begin to see full standing headroom, depending on the type, model and design.
Tony Fleming, who started the company many years ago, never built a boat with his own name on it that wasn't beautiful. He says that a boat simply "must look right" above all else. And certainly the 55 did. And having a low profile (thus losing walk-in headroom in the engine space) is one of the reasons that it "looked right" to Tony's eye. The 65 has standing headroom in the engine room, and has a higher profile as a result. But because it is longer, to Tony's eye it's superstructure could carry the height.

Option A is more traditional and has a long passageway below to the staterooms.

The important thing here to note is there are two seats facing forward on the flying bridge, the boat deck will be able to handle a larger tender than could the 55 and there is room for a BBQ and a freezer up here abaft the settee on the starboard side.

Fleming has plopped itself down squarely in the middle of two divergent types of motoryachts -- displacement and planing. The 58 like all of the Fleming boats will be semi-displacement, which means they will be able to get on plane if enough horsepower is applied. Its warped-V hull and flattish surfaces aft with the application of plenty of engine kW should let her cruise in the mid to high teens depending on which engines are employed -- the standard ones or the optional MAN 800s.
Fully loaded this boat will be heavy and we're not sure how fast the standard or even the optional engines will push her. We'd sure like to test this boat and see where she comes out on the performance curve, and perhaps we will when she is launched.

If you have not been to Fleming's website then we urge you to make the trip and read their description of how they build their boats. We can tell you that it is first rate, using a traditional hand-layup regimen and stringer design. The bottom is solid and therefore more puncture-resistant than would be a bottom with a cored hull.
That fact, plus the brand's lavish use of teak means its boats will be heavy. Heavy isn't fuel efficient, but it is considered by most people to be more comfortable at anchor. Heavy, planing boats of this size are often more comfortable in a moderate chop because the boat can just buzz over the sloppy stuff rather than have to mush through it.
Flemings are built in Taiwan at the Tung Hwa yard that has been in business for many years and exclusively builds Flemings and the newly acquired Corvette 340. The yard's quality has been consistently good over the years based on everything we have seen and heard.

A Fleming 55 heading for blue water. The new Fleming 58 will have a profile more or less like this.

In fact this boat is all about fixing the "cons" on the Fleming 55, and we think the 58 has done a great job of that. Perhaps a con of the 58 could be that it's saloon, while bigger than the 55's, could have been even longer had the builder wanted to extend the superstructure aft. The salon could have also been made wider if the builder had chosen to take a few inches out of each of the wide side decks. Creating an asymmetrical superstructure with the saloon and galley all the way over on the port side, for example, would have also picked up a fair amount of interior space. The other side of this coin is that the boat's looks might suffer.
One of the popular features of the 55 is its huge -- 250 sq. ft. -- cockpit. The folks at Fleming tell us their customers like the large cockpit, using it for dining, storing scuba equipment, installing a BBQ, and all manner of other things. So by keeping the saloon's length about the same, the 58's cockpit has become even bigger than the 55. By keeping wide side decks, the crew or skipper can easily get from bow to stern and the boat can be moored port to, as well as starboard to. 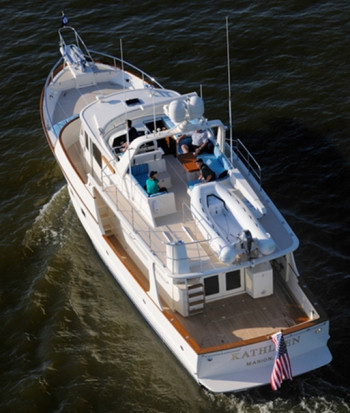 Another view of the 55. There could be an extra three feet on the boat deck for a tender. Note the huge aft deck and the wide side decks.

When we opened this report saying we think Carleton Mitchell might have approved of this boat, that really says it all. If you are a cruising couple, and can afford the boat, then the Fleming 58 should be on your very short list.
So the question begs, How much will she cost? The answer is, right now no one really knows. It is too early in the boat's gestation period for the yard to hang it's hat on a number. However, you can trust that it will fall somewhere between the MSRP base price of $1.8 million for the Fleming 55 and the $3.0 million for the Fleming 65. Our guess, if we had to make one, will be around $2.5 million for the standard 58, plus freight. 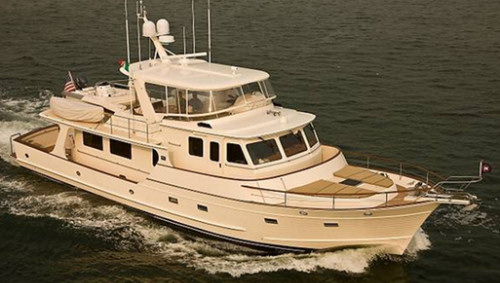 The Fleming 65 has a strong family resemblance to the 55. We like the hardtop that is buttoned-up with isinglass because it creates more three-season living space for very little money. Note the tender with center console on the boat deck.

Over 220 of the Fleming 55s have been sold since the first one was launched in 1986. Now 25 years old the boat is as stylish as it was the day she was first splashed. That is the advantage of buying a classic design. Clearly this boat will also be successful, albeit with fewer units because of increased cost. Nevertheless, when you go to sell, you will always know that there are 220 people in 55's who would like to move up some day.
These boats take some time to build, so we would say if you are at all interested you should go to the fall boats shows, check out the 55 and 65, split the difference in your head and imagine what the new boat will look like. If you like what you see, then we would get some money down on a building slot before you are pushed out into 2014 or later. 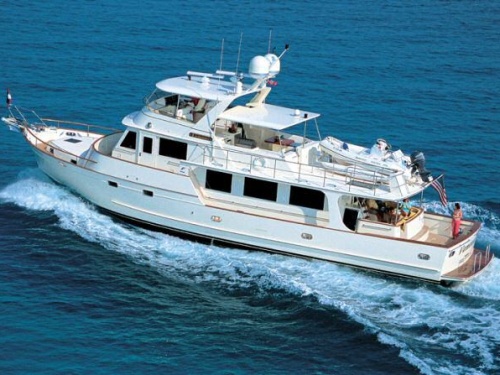 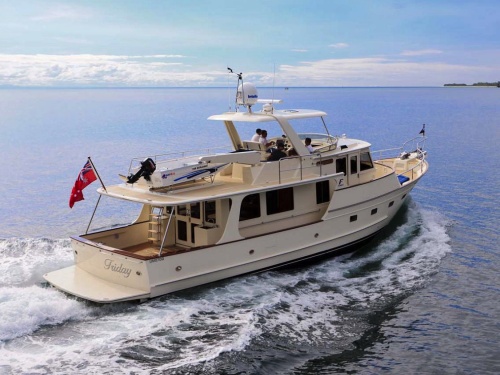 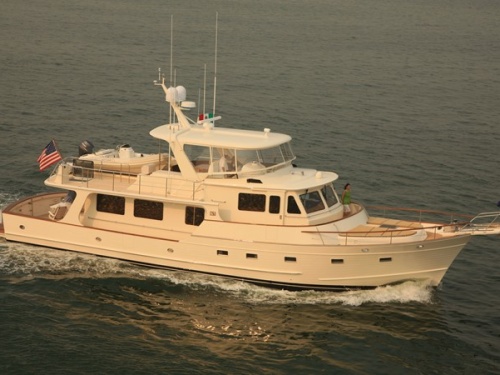 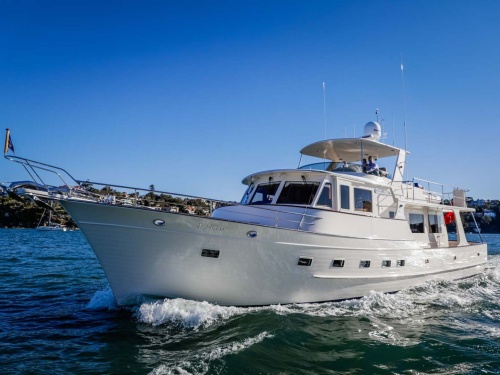