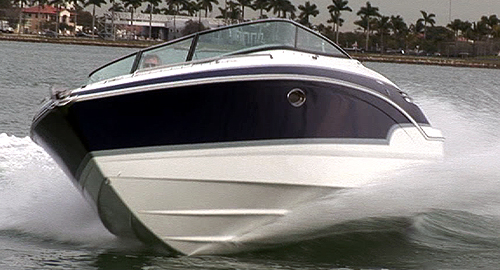 The new Formula 290 BR is as exciting to drive as she appears in this photo.

The layout of the Formula 290 BR is very similar to the 280, until one looks closely and sees all of the very important refinements. The boater enters via the swim platform, so let’s start there. The swim ladder is to starboard, but I’d like to see it to port – where the transom door is -- so that the operator can see if it is being used.

The Formula 290 BR has lots of refinements and improvements from bow to stern.

The old Formula 280 BR, now out of production, was a great place to start when Formula designed the 290.

As one can see, the swim platform is now huge. This makes an ideal “stern beach” and also covers the out drives which we like. Virtually everything else in the boat is also bigger – except the bow area which was reduced in length to make the head compartment larger, as well as the bench seat behind it.
To starboard in the transom is a large storage compartment designed to hold fenders and the table pedestals, with special places for each item. Just before the transom door is a stereo remote so the boater can change tunes from the stern beach.
The sun pad is large and features an aft-facing headrest. A nice touch is the ability to easily make it larger by going into the cockpit and pulling the aft seat-back forward and flipping down the sun pad headrest and the whole area becomes one big bunny pad. It resets just as quickly. The gals will love this feature.

The cockpit is entered via a swinging door that is a bit awkward to use until one gets used to it. Lift and swing it open or closed, and then drop it back down into position. I like how Formula does this on their other boats better, with a positive hold in either the open or closed position, and a firm push to get through.
Once in the cockpit, there is “C-“shaped seating with a pedestal base in the center for mounting the table. The center seat has storage for a cooler and the nighttime white nav light and a table. The cockpit is self-bailing through aft scuppers. The scuppers are large singular openings mounted on the vertical – not in the deck.
If one has ever owned a boat with small, deck-mounted scuppers with a metal plate with a bunch of holes in it like the one in a shower stall at home, then one knows how easy it is to plug these up. Leaves, a wayward towel left aboard or any number of other things can, and have, stopped up these kinds of scuppers, resulting in the boat becoming submerged at a mooring after a big rain or two. Hey, it happens. 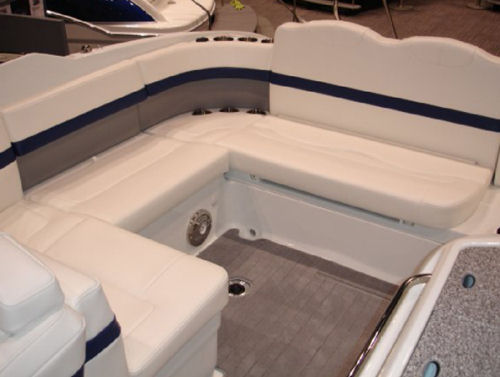 The aft seat converts easily to a full sun pad. Note the pedestal base and the stainless speaker grille. Also noticeable is one of the two self draining scuppers. To the right of the shot is one of the many grab handles located throughout the boat.

To port is an entertainment center with storage beneath, as well as a cooler. Above is a trash receptacle and sink. Missing from our test boat, but should be ordered, is the dual voltage cockpit refrigerator. To alleviate the hassle of opening the door and having the entire contents spill out, Formula went with a pull out drawer refrigerator, so all items stay nice and secure. The counter tops are Corian which swing up on piano hinges and I think they are a lot classier-looking than fiberglass.
As we move forward there is a bench seat to port with storage below, and forward of that, an enclosed head. The walkthrough between the two consoles is 23” (58.4 cm) so no worries about even the most rotund guest squeezing through it. I’ve actually seen doors on megayachts that are only 21” wide. Handrails are everywhere as they should be on all boats, but often are not. 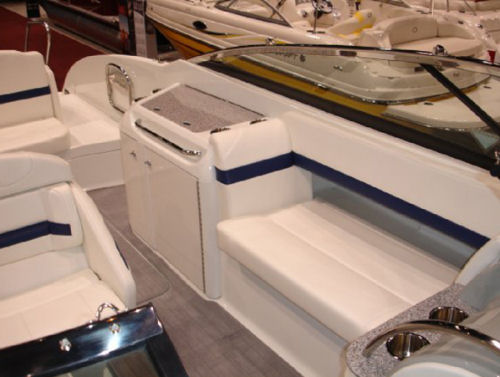 To port is a bench seat that is comfortable regardless of which way the boater is sitting. Note the entertainment center aft. Grab handles lead one safely forward. Note the stainless steel window frame.

All the way at the bow, the seating is interesting in that the cushions don’t carry all the way forward as we usually see. Instead, there is a space to rest feet on the deck while still facing forward, much like a chair. It’s a nice feature, and if desired, there are filler cushions to make a bench that carries fully forward. Those filler cushions have dedicated storage right underneath the helm. The bow seats also have flip down armrests, a welcome addition that I would expect to see on a boat of this size and class. 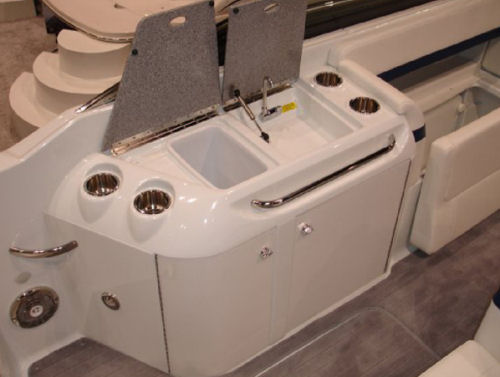 The entertainment center featured a trash receptacle and sink. Below were storage on the left and a cooler on the right. A highly recommended option is the dual voltage refrigerator with pull out drawer.

The walkthrough to the bow has a door that can be used to block off the wind and works in conjunction with the walkthrough windshield. There’s also a pedestal base at the bow for adding to the entertaining value. On a boat this size it is nice to anchor out and have the kids up in the bow having lunch, while the adults are in the cockpit.
Interestingly enough, the latches on the opening windshield are interconnected; unlatch the top and the bottom follows. This is a nice feature and one that I’ve seen lacking on far larger boats with a much bigger price tag.

The helm is nicely laid out with upper gauges mounted into molded mounts rather than just planted into a flat surface. The helm seat is double wide with separate flip-up bolsters. Waterproof rocker switches are lighted when activated, tilt hydraulic assist steering makes handling effortless. Dual Livorsi engine controls are stainless steel.
I’d like to see the engine controls mounted horizontally, rather than the angle that they are at now. It just feels a bit awkward to advance the throttle by lifting first and then re-positioning a hand to push the levers the rest of the way. When standing, the angled position works fine when needing to make small throttle changes while coming into a dock, but otherwise…not so much. This detail is better seen in the video.
I do, however, like the separate throttle and shift levers. This is a detail that many builders are getting away from these days with fly-by-wire single lever controls. Certainly they are easier to use for the neophyte, but veterans will probably like the ability to dock by working the gears only, the way they’ve always done it. Below the shifts is a circuit breaker panel.

When accelerating, there’s a bit of a bow rise, about 15 degrees. We measured a 3.7 second time to plane and she reached 30 mph in all of 6.4 seconds. I think these are very quick times, given the size and weight of the boat. Ski or wakeboard beginners will also like the quick hole shot that will get them up in a jiffy. 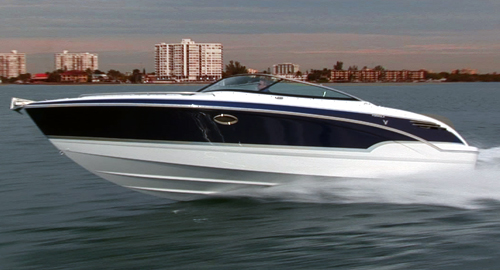 We think the Formula 290 BR is a picture of grace and elegance on the water.

The Formula 290 BR is also a fast boat. Top speed was 54.7 mph with twin 320-hp gas engines. Handling was textbook Formula – which means as easy as a boat half its size.
The Formula 290 BR turns like she’s on rails, really clinging to the water, but the bank angle of about 10-degrees keeps the boater planted in the boat so that they have little tendency to get thrown to the sides in a hard turn. Hitting our wake caused a bit of hard pounding, which I didn’t expect because she has a 22-degree deadrise at the transom. That said, we were hitting in the neighborhood of 40 mph and the boat weighs more than 10,000 lbs. (4,545.45 kgs,) fully loaded, so it was probably wrong to not expect what we got.
What I also expected, and actually got, was that Formula throaty roar that the engines produce. We did not have the optional Captain’s Call exhaust diverter, just the Bravo III’s with hub exhausts, and the twin 320-hp 377 MAGs, really sounded cool. The 300-hp 350 MAGscome standard.
Unfortunately, on test day our fuel flow meter decided to pack it in, so we have no fuel flow numbers for this test, only speed and decibel readings. Our previous test of the Formula 310 Bowrider with twin 377 MAG MerCruisers is instructive. That boat is not only 2’ longer, but is also 6” wider and several hundred pounds heavier and had a best cruise speed at 3000 rpms of 28.7 mph and got 1.59 miles per gallon. Because the 290 BR is narrower and lighter with the same deadrise, she should have a faster best cruise. 1.59 miles per gallon is a good best cruise fuel consumption number and mpg might be even better in the 290.

Overall, the 290 is a very exhilarating boat to drive, and I really think that 54 mph is fast enough in a 29’ bowrider. Once the boat has been run at that speed a couple of times, there is no need to go there again unless Brand X waltzes by and kicks sand in one's face. Then just let him have it not only with speed, but also with Formula class.
As we always say, Formula boats are not for everyone. They are top of the line in quality, but they are also one of the most expensive boats in class made in the U.S. – (making them downright economy models for our friends in Europe.) The MSRP price for the 290 BR with twin 377 MAGs is $211,670 and $203,410 with the 300-hp 350 MAGs. And at those prices the boat is pretty much loaded. 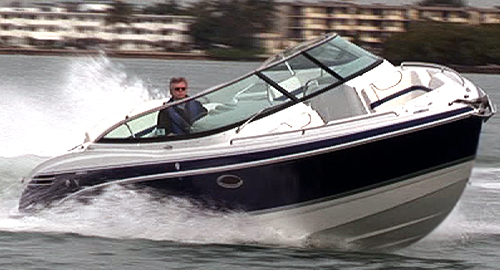 Please note that Formula has one of the best five year warranty programs on the planet. It is one of many attributes which is built into the price that isn't seen -- until it is really needed.
In looking over the list of options, I only found four items that I would add, totaling $6,565. Those items are: Bimini top ($1,905), cockpit refrigerator ($2,025), porcelain head with holding tank and macerator ($1,225), VHF radio with antenna ($1,410). Judging by what I see other boat builders doing, these option prices are very reasonable.
Room, utility, ride, styling, speed, quality and class all in one package that is hard to beat. 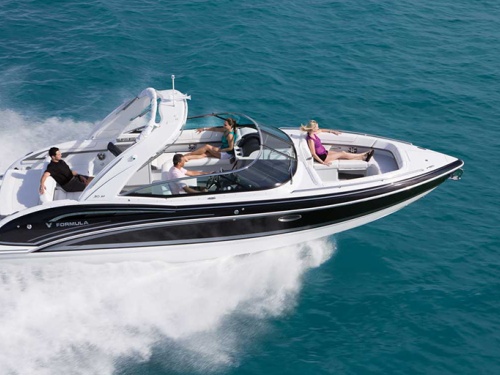 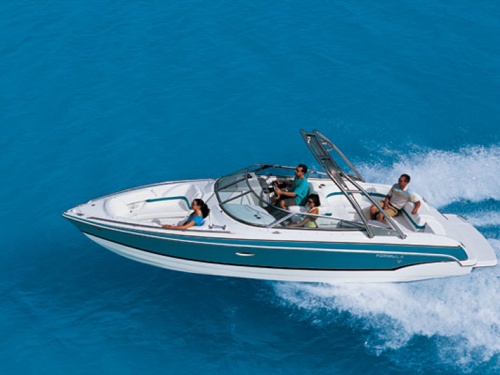 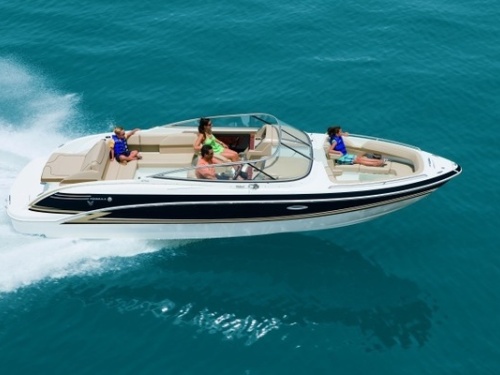 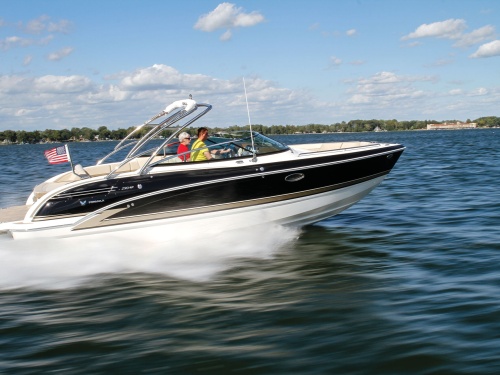