Capt. Steve completed a test of the Formula 31 PC (Performance Cruiser) near Merritt Island, FL and came away with some important insights into the functionality of this top-tier pocket cruiser. In his test video and captain’s report, he reveals operational characteristics and gives us a close look at the features that make this such a popular model in the Formula lineup – one that now carries 31 different models. 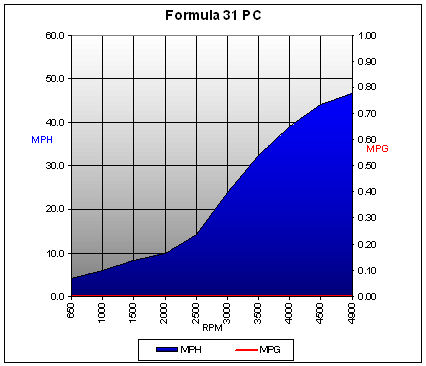 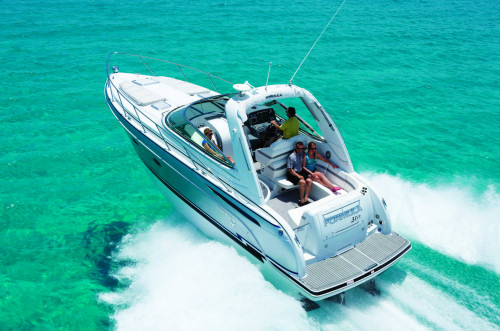 We tested the Formula 31 PC recently and found another jewel in the lineup.

The 31 PC layout really does not offer any surprises, and is much what is expected from a cruiser in this size range. The cockpit features a U-shaped lounger with dual tables. Separate pedestals allow for lowering the tables and adding filler cushions to turn it into a sun pad. To port is a sink and wastebasket with a little counter space to spare. Below was an optional dual voltage refrigerator that had an interesting feature. To negate concerns about soda cans, or other items falling out when the refrigerator door is opened, this unit had a refrigerated drawer, so all items are contained nicely when sliding it out. It’s the little details that make a difference.

The deck was covered in the optional teak-looking vinyl decking that had the look of teak but none of the maintenance concerns. It’s available as an option on the swim platform and/or cockpit sole. All cushions were soft vinyl treated with Prefixx that makes cleaning a snap, and time and again, we’ve seen how cushions treated with this protectant will come clean even after being written on with a Sharpie. Although we’ve yet to see this advantage realized in real life, it’s nice to know that in the event of a Sharpie emergency, one is covered. Little details… 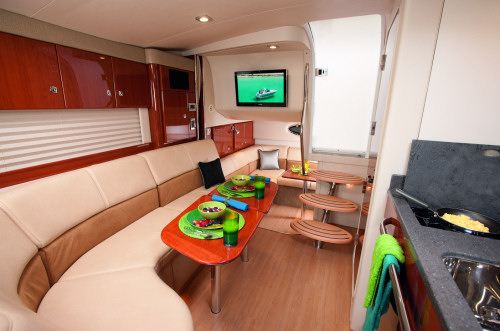 Note the open layout to the mid-berth and the mounting position of the LCD TV. The dual tables are finished to perfection and, of course, they lower to form another berth. We liked the carpeted deck rather than a wood deck.

Below decks, the 31 PC is a showcase of fit-and-finish. The eye immediately takes in the gleaming finish and upon closer inspection one can see the extra work that Formula puts into their interiors. The uppermost drawer has a silverware tray, all joinery is dovetailed, stainless steel hinges are just a bit wider than they need to be and secured every 1 ½ inches… just lots of little details that make it all come together. 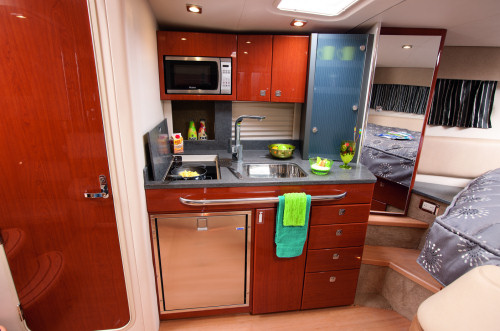 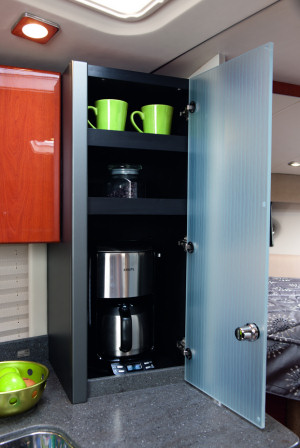 The two-burner stove is recessed to keep items from sliding off. The lid is fitted with a micro switch that shuts off the stove when closed. The “coffee dock” is a welcome feature and has a GFI outlet inside.

The salon table is two-piece cherry wood and finished to such perfection that it could use it as a mirror. Naturally, dual pedestals allow for a lower position for adding filler cushions that convert the area to a berth. Forward is an angled double berth with memory foam mattress. Facing aft, above the mid-berth, and to the left of the stairs is a 22” LCD TV. The mid-berth is a small step down and it’s an open configuration making this a nice sitting area rather than a berth alone.

Being that this is first and foremost a boat, a look at the helm is in order. The most noticeable feature that separates Formula from other boats is the dual Livorsi engine controls. These feature separate levers for the shifts and throttles for both engines and they’re finished in gleaming stainless steel. They’re mounted on an angle which makes them awkward to use when standing up (one will have to lift them rather than push them) but when docking it works nicely. I would put one engine in forward and the other in reverse and then with a hand on top of the throttles, roll one's hand back and forth to gently lift, and therefore add power to the engine of choice.

One does not usually find dual engine controls in a boat this size but it’s standard with Formula. Note the outdrive trim switch on the side of the throttle. Trim tab controls can be seen ahead of the power quadrant.

Personally, I like having separate controls as it just feels more natural to me to be operating this way, but others feel the need to have the engine and shifts in a single pair of controls, and for those folks, I’d say get used to this. It’s a fair tradeoff to get the quality of boat that Formula offers, and this is more of a “graduating to” boat than a starter. I guess the same could be said for the whole Formula line but when drifting into digital controls, one gets the “normal” single lever for each engine. 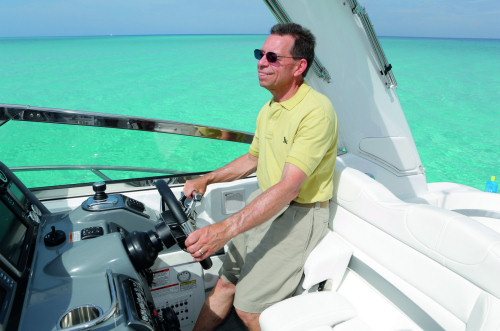 I also like how pretty much everyone is making room in the panel for various sizes of nav display. The stainless steel windshield frame compliments the SS seen all throughout the boat. 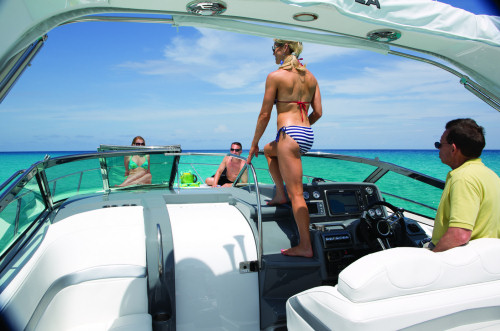 Formula makes comfortable walkthroughs with molded in steps and convenient grab rails, but… the window latches need to be interconnected. Moving the top window latch should move the bottom along with it. Now, getting to that bottom latch is nearly impossible.

We weren’t able to find any seas to speak of, but running through varying wake sizes showed a tendency to pound a bit, not unlike any other boat, but as I say, this isn’t “any other boat”. When at cruising speed, the boat tends to produce a bow oscillation effect that won’t go away until the boater takes action with the trim tabs -- touch of “bow up” will cure it, and it will do so without adding a negative effect on visibility due to bowrise.
I also found the 31 PC to behave as if she were riding atop a bubble and minor changes in weight distribution (i.e. a heavy cameraman and gear moving from one side to the other) resulted in a noticeable tilt to one side or the other, that again, had to be corrected with the trim tabs, which truth be told, is why they’re called trim tabs. This trim-sensitive characteristic is typical in a hull of this size and weight. She has an 18-degree semi-deep-V hull which is a good compromise for this size boat. A deeper V would make her even more weight sensitive than she is. Going with a flatter deadrise would only increase pounding.
Turns were crisp and tight with no uncomfortable digging in that causes everything to go flying. A simple roll was all that accompanied the turn and there’s no need to hang on for dear life in even the hardest turn. Slowing in seas or when approaching a wake is in order or there will be a pounding that can get uncomfortable, but in no way seemed beyond the structural integrity of the boat.
Now slowing down quickly is another thing. If one chops the throttles back and immediately come off plane, the stern will squat. One has pretty much stopped the forward momentum of the boat, but remember they have no control whatsoever over the stern wake which is following. That following wave will wash right over the swim platform and into the aft cockpit deck. That’s one reason why one will want to keep the transom door closed, and slow down more gradually, giving the boat time to trim itself to ride over the stern wave when it comes rolling forward. Again, this is a normal characteristic.
In our tests runs, the 31 PC hit 46.7 mph powered by twin 375-hp MerCruiser with a Bravo III drive. Unfortunately, our fuel-flow gear decided to pack it in during the speed runs so we will have to re-test for that data and will add it later. Keep an eye out.

All things considered, I found the Formula 31 PC to be a nice compromise of speed, utility and riding comfort. Like so many things about Formula boats, it takes a sophisticated buyer to appreciate a lot of the details that add up to a big difference. For example, there is 6’4” of headroom below, there is a full double bed forward instead of a narrow island berth. On the bridge deck, there is forward seating for three people, something that is often not seen because the port seat is turned into a “lounger” in order to provide headroom below. That means whoever is sitting there is riding side-saddle, which is awkward under way.
While the basic layout of the Formula 31 PC is typical of boats in this class, the real differences lie in the fit-and-finish and details. There is also Formula’s 5-year “Formula Guard” warranty protection plan which is one of the most comprehensive in the industry. 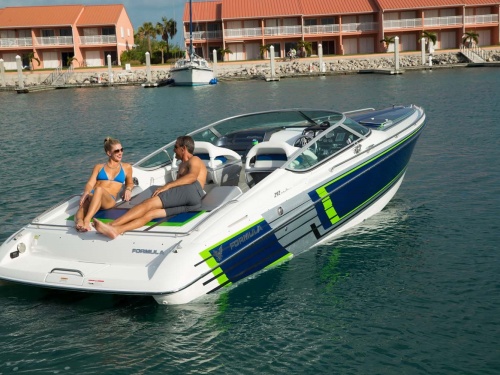 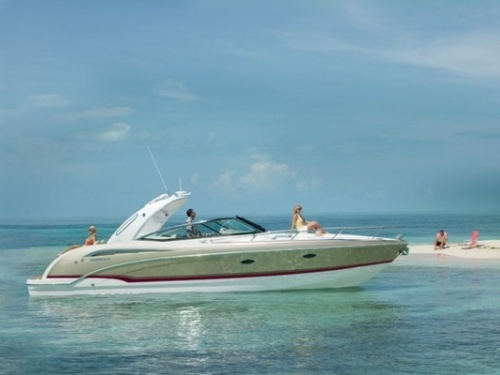