The Hargrave Custom Yachts 78 Flybridge Signature Series motoryacht Crab Pot was built for long-distance cruising in a variety of climates. Her owner spared no expense setting her up for maximum utility and maximum comfort. She has been to Alaska and is now bound for new horizons with a new owner (as yet to be found) at a price half as much as new motoryacht her size on the market built in Europe or the U.S., or most anywhere else, for that matter. That price is $3,875,000. Hargrave tells us that it would have to charge $5.5 million today to replace it.

The Hargrave Custom Yachts 78 Flybridge Signature Series motor yacht Crab Pot was built for an owner in the Pacific Northwest whose home cruising grounds often demand a lot from a yacht.

The owner of the Hargrave Custom Yachts 78 Flybridge Signature Series Crab Pot, launched in 2006, knew what he wanted when he ordered this yacht. He lives in the Pacific Northwest and he had her equipped for extended cruising in a range of climates. Few yachts her size offer a package of standard features and options so extensive and an interior so luxurious at such an appealing price: $3,875,000.

Ready for the Northland

Crab Pot was built for a restaurateur whose passion is fishing. The yacht was meant to serve as a family mothership for his smaller tow-behind fishing machine. The weather in his home waters is notoriously fickle, often producing daily extremes in temperature and plenty of moisture. Among the yacht’s myriad custom features meant to contend with the climate and rugged conditions of his home waters are a Kabola diesel-fired heater, a Barrett enclosure on the flybridge, two inverters for silent operations at anchor, hydraulic bow and stern thrusters, a 1,400 gpd Sea Recovery watermaker and an extensive AV/nav system.
Crab Pot provides accommodations for eight guests in four staterooms, plus two crew. Each stateroom has an en suite head with full shower. The full-beam master has his-and-hers heads and a very large shower in between. 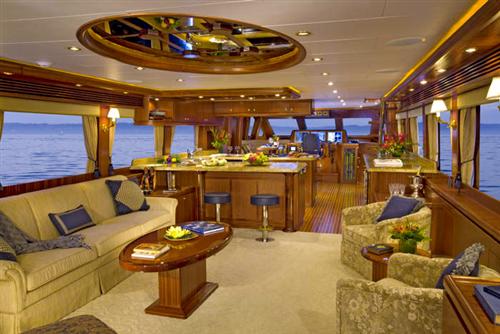 The yacht’s expansive, well-lit main deck keeps the saloon, the galley and the lower helm in the same visual and psychic space. Most American women love this layout. The windows offer 360-degree views out. 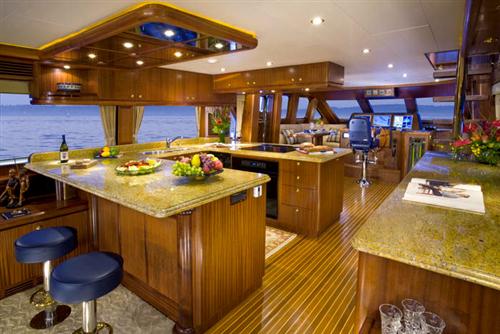 The open galley features Sapele wood cabinetry, granite countertops and first-class appliances. There is plenty of counter space and a couple can easily communicate from galley to helm. 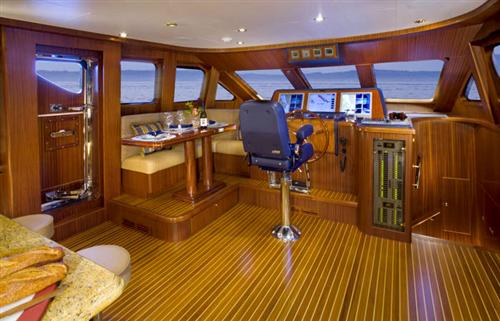 The lower helm, with its adjacent dinette, is a likely place for a romantic dinner for two at anchor or a comfortable place to grab a sandwich while underway. 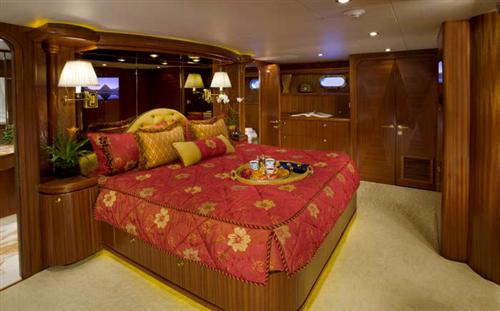 The master stateroom is built for home-grown comfort for long stays aboard. 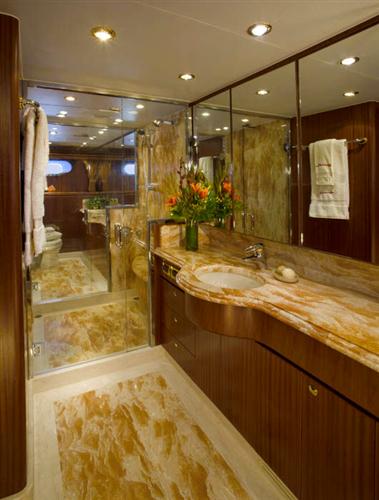 The master bath, adorned with yards of marble, has his-and-hers facilities. Note the huge shower on the centerline of the boat and solid mirrors that reflect light to brighten the space and make it look even bigger. 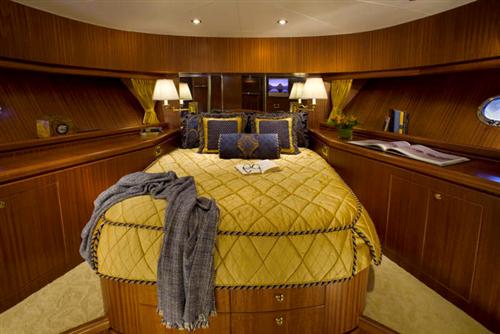 The VIP forward has a 12 inch mattress which should keep most princesses happy. Note drawers under the foot of the bed and cabinets to port and starboard. 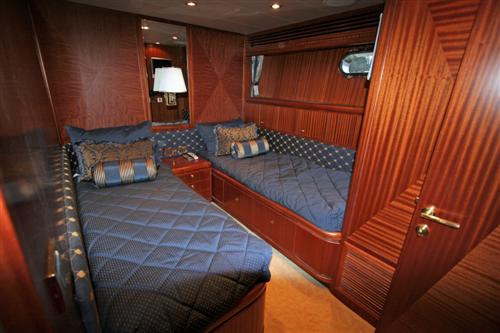 The guest cabins are well-appointed and cozy. The boat’s 21’ beam is a foot or two wider than many boats in this class and pays off in the accommodations area. 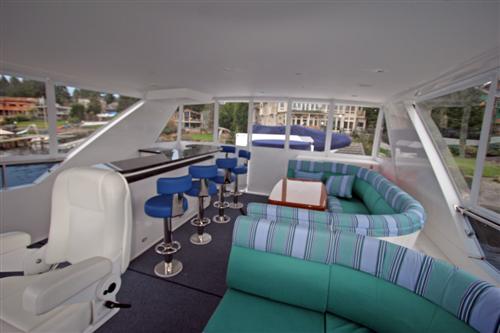 Crab Pot’s boat deck functions as an all-weather lounge with spectacular views. Note how attractive and unobtrusive the Barrett isinglass treatment is, giving the boat huge additional living space. Note in the background on the boat deck is a 15’ Nautica with 90-hp Yamaha as well as a Jacuzzi. 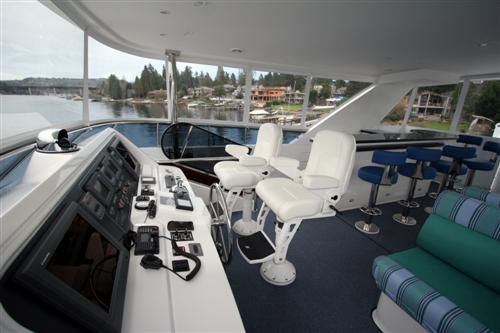 The flybridge offers the best seats in the house no matter what the weather. Crab Pot goes first class with Stidd seats for the skipper and navigator. Note access hatch to the main saloon below. 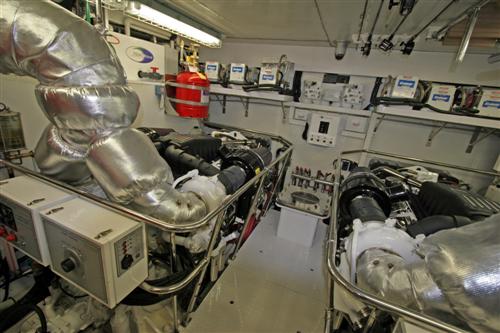 The yacht’s Caterpillar 1675-hp C32s have only 400 hours on them and produce a cruise speed of 20 knots and a top speed of 26, according to the builder. Her 2,700-gallon fuel tanks give her impressive range, particularly at reasonable speeds of 11 to 13 knots. She is also equipped with bow and stern thrusters and Naiad stabilizers with nine-foot fins.

Easy Operation for a Couple

Crab Pot was designed for easy handling by a husband and wife. With both bow and stern thrusters docking is easy, even in adverse wind and current situations. Because the main deck is so open, when working the boat from the lower helm the skipper can easily see what is going on all around the boat. There are two water tight doors, port ant starboard off the lower helm so the skipper or mate can easily move from one side of the boat to the other while docking.
Crab Pot is also fitted with a pull out remote steering station on the starboard side deck to make docking even easier. Because large motoryachts with big engines and props typically idle at 6 to 7 knots, Crab Pot is fitted with trolling valves that slow her down, not only for “trolling” but also for more precise and easier operation when docking. This is an important feature and one rarely seen on large motoryachts.
There is a captain’s cabin aft, where it should be, for when the boat is on charter, or for a mate when the owner’s family is aboard.
Because the boat has four staterooms. Each with en suite heads, she is ideal for chartering and should fetch something on the order of $35,000 a week, depending on location and season.

This four-year old boat has only 400 engine hours and is loaded with electronics for virtually every condition. All of the equipment aboard is first class, from its two 25kw Northern Lights generators to its Headhunter sewage treatment system. Because the boat has been to Alaska and back, the kinks have been worked out and typically boats of this age are actually better than new because the owners has had fixed all of the niggling little problems that occur on all yachts of this size and complexity.
Hargrave Custom Yachts will now build an identical motoryacht to Crab Pot for $5,251,746, which is about 25% more than the asking price of $3,875,000. It is also about $600,000 less than comparable size and vintage Italian motoryachts of the same size, but with a lot less equipment than the Hargrave 78.
Crab Pot’s standard equipment and options are impressive—a staggering nine pages long. Good luck finding something important missing from the package.
To see the complete list, click here -- 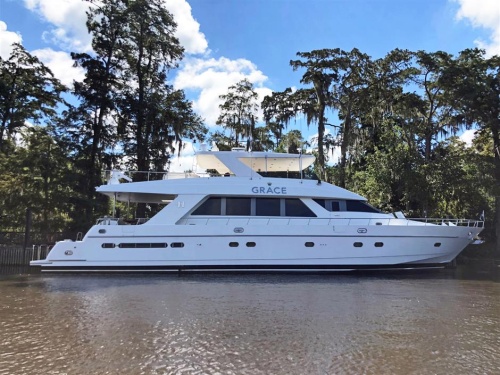 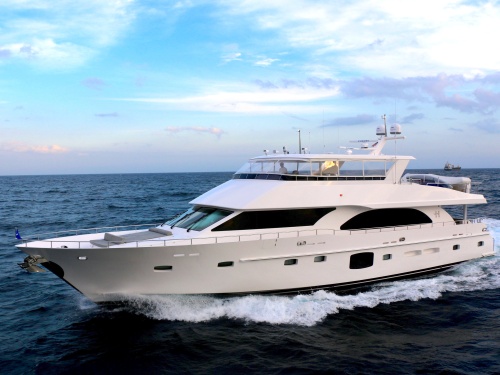 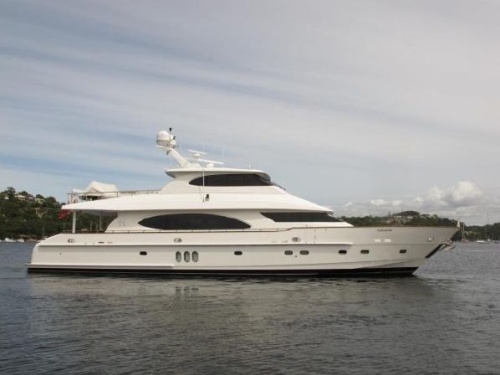 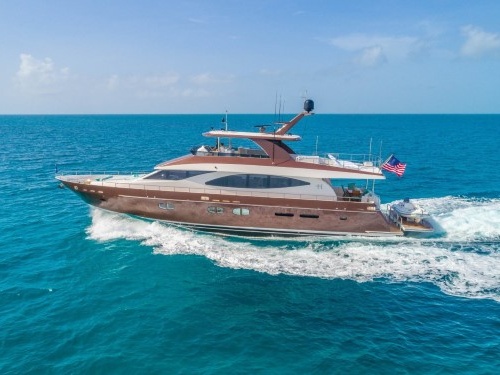