Hatteras 68 Convertible (Not in Production)

The Hatteras 68 is built both in the flying bridge configuration and also in the enclosed FB style seen above. This enclosed addition to large convertibles is growing in popularity because the top deck is a virtual "sky lounge" similar to those seen on large motoryachts. One of the greatest drawbacks to convertibles vs. conventional motoryachts for people wanting to do a fair amount of cruising in them, is the space given up forward on the main deck compared to a motoryacht of the same length. In essence, for cruising types, the enclosed bridge deck recaptures that "lost" saloon space by creating a "duplex" arrangement. The enclosed bridge and the extra two to three foot of beam of the Hatteras 68 together create a most compelling cruising convertible in class for people who want to both cruise and fish. 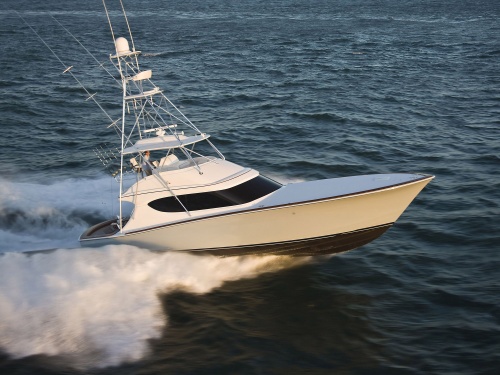 Hatteras 64 Convertible (Not in Production)