With the Cabo line morphing more and more into its sister company Hatteras, it was only a matter of time before we started to see models come out that reflected the best of both brands. Now the wait is over with the GT45X and GT45X Tower (formerly the 45 Express and 45 Express Sportfish). The two models are basically the same as each other with added features that turn the dedicated cruiser into a dual-purpose cruiser/fishing machine worth drooling over. And both are offered in single or double stateroom layouts. Let’s take a look and see how the combination works. 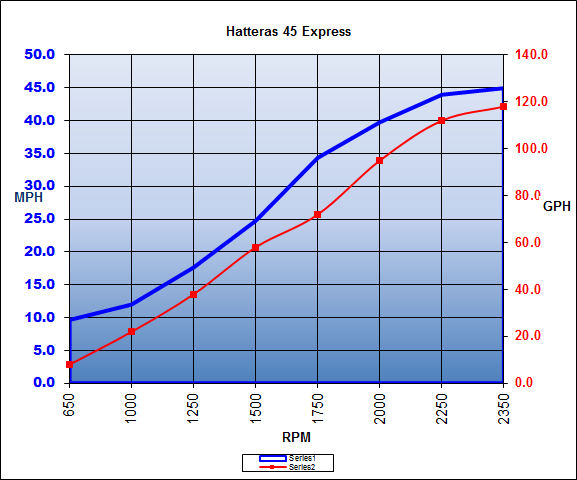 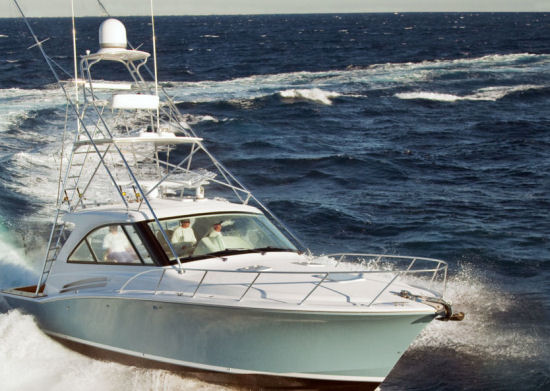 The Hatteras GT45X and GT45X Tower are a combination of the Hatteras and Cabo design teams that may be a harbinger of new things to come from Hatteras.

We’ve long been advocates of the benefits of using a sportfish for cruising. These offshore performers are just the ticket for providing a safe transport back to protected waters when the weather turns snotty, or even to keep going when it took an all day cruise just to get to the fishing grounds. 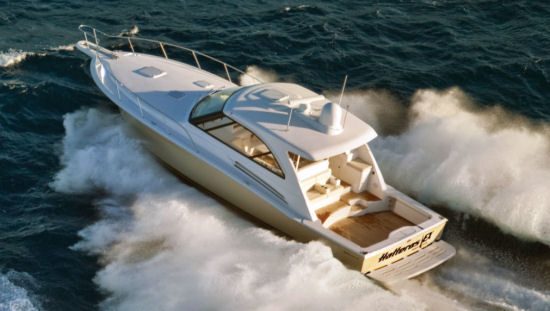 In the cruising version, the GT45X is a hard hitting performance cruiser that has the solid build and handling of an offshore-targeted yacht.

Now what would happen if we took the qualities of an express cruiser and morphed it into a sportfish? Even better, what if we offered both versions separately? We’d have the newest offerings from Hatteras, that’s what. With the marriage of Hatteras and Cabo fully consummated, the offspring are naturally showing classic characteristics of both parents. The most recent of which is the 45, available in both Express and Tower versions.
Both offer a wide open helm deck, a spacious cockpit that can entertain one day and fish hard the next, and below choose from either a single or double stateroom layout.

How Did this Happen?

Most know the story, but for those who do not, it bears repeating since it has such a happy ending. Hatteras, a company with a long-standing reputation for building quality cruisers, was owned by the United States version of the 500 lb. (227 kg) boat-manufacturing gorilla, Brunswick. In 2006, Brunswick became even bigger with the purchase of Cabo, well known for its express fishboats. Not surprisingly, Brunswick’s first order of business was to consolidate the two into the Hatteras facility in New Bern, North Carolina. With Cabo out of the California desert, the two began building boats side by side.
Things went well, but economics being what they are, Brunswick was forced to reduce staff and shop for a buyer. Ultimately, one stepped forward and in 2013, the combined Hatteras/Cabo line was sold to Versa Capital Management’s subsidiary, Navis HCY Acquisition LLC.
With the ink dry on the Navis deal, Cabo moved to the back burner of production while Hatteras continued to grow both the GT line and motoryachts. Fast forward to today, and with a void in the marketplace, Hatteras decided that it needed to offer a mid-size boat for those trading up from other brands as well as trading down from existing Hatteras. Out came the famed Cabo 44 plans, a bit of a dusting off at the drafting table, some tweaking to inject some “Hat” DNA and out comes the GT45X and GT45X Tower.
…And they lived happily ever after.

The Same Features Between the Two…

Obviously these two models come from the same mold and share some, if not a lot, of the same characteristics. Let’s take a look at what they have in common, starting with the living spaces.

One Cabin or Two

Choose the GT45X or GT45X Tower in either one or two cabin layouts.

Moving to the lower deck accommodations, both boats are identical. The well-equipped galley is immediately to starboard. The head is located just forward. To port is a large L-shaped settee wrapping around a minimalist teak pedestal table. Fully forward is the master stateroom with an elevated island berth, allowing access from both sides. A variety of wood finishes are complemented with a teak and holly sole to highlight the entire area.
Two layouts are offered, depending on whether the GT45X will be used more as a couples cruiser or as an overnighter for four people. By eliminating some of the settee, a separate cabin can be added to port that features a pair of over/under berths in an enclosed stateroom. 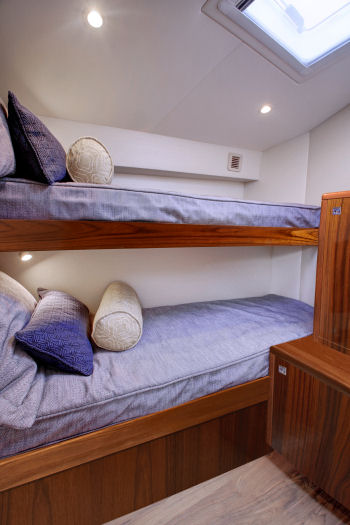 With the two-stateroom layout, this double-berth cabin is added and takes up a small portion of the port side settee. 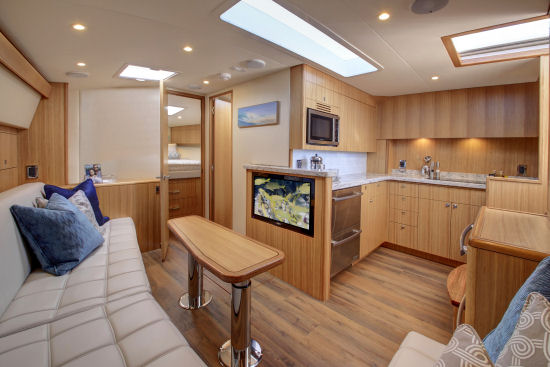 The galley is located to starboard with the master forward. Natural light comes from three overhead skylights. The settee to port wraps around a pedestal table and we’d choose a version with expandable leafs for better functionality as a dining table. 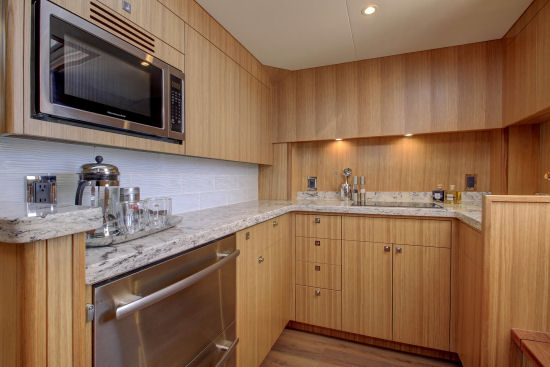 The galley features a microwave, refrigerated drawers, and a flat-surface two-burner ceramic cooktop. Choose from a variety of wood finishes. 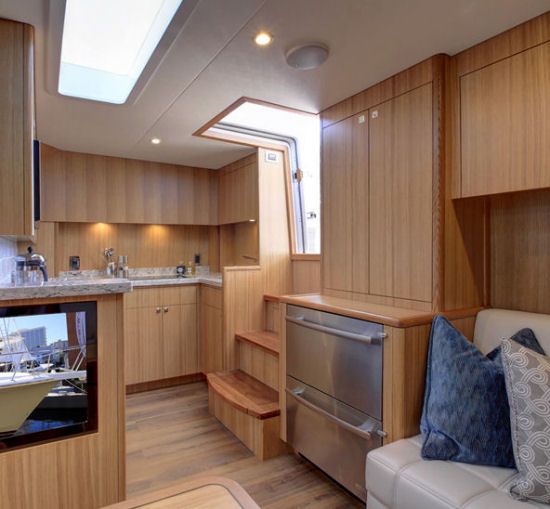 Additional refrigerated storage is at the aft bulkhead. 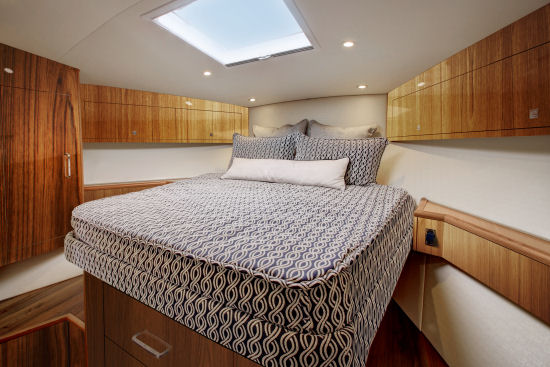 An island berth makes up the forward master stateroom. Storage is abundant throughout. Natural light is overhead. 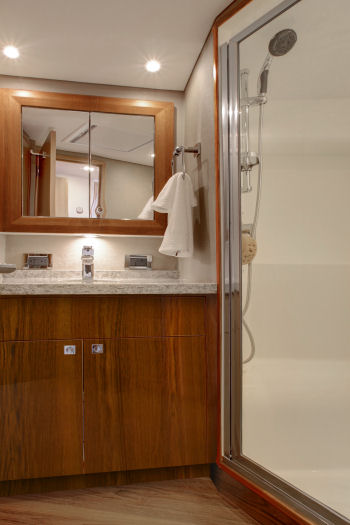 The head features a separate walk-in shower. Counters match those in the galley.

The main deck features an elevated helm deck and a spacious cockpit, both well suited as social areas.

Moving up to the helm deck, the 45s have a molded deckhouse with an integral hardtop. As expected, the helm is mounted in the center of the deck with a single operator’s seat, providing an elevated vantage point for good visibility. A pod style helm had minimal impact on the space provided by the helm deck. Choose from a fiberglass console or high-gloss teak. Both have Palm Beach styled controllers to the sides. A polished metal switch panel has each switch’s function etched in. Engine displays are just ahead.
Hatteras isn’t married to any one electronics provider, so owners are free to choose from their favorite and plenty of open real estate in the panel will easily accommodate large flush-mount displays. To the sides are the ancillaries such as autopilot, VHF, etc… 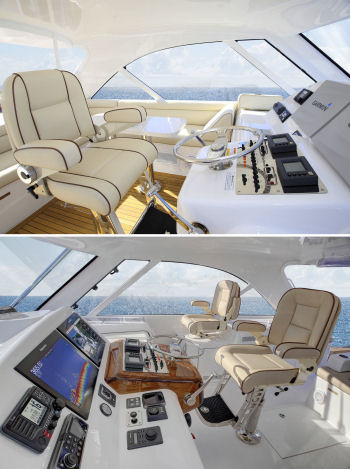 The helm allows for a fair amount of options. Seen here are two versions, one is a fiberglass console, the other is varnished teak. Choose from either Garmin or Raymarine electronics. Both put the Cat displays above a row of toggle switches. Palm Beach type controllers are to the sides. We’d add a steering knob to the stainless steel wheel.

A massive L-shaped settee wraps around the entire port side and at the forward end provides an aft-facing lounge. To starboard is an observer’s seat, allowing for a companion to take part in the navigation. Both the helm and observer’s seats are fully adjustable, high-end Stidd brand. An engine room access hatch is located in the center of the deck.
The deck is enclosed on three sides with windows seamlessly blending into the sides and the stylish fiberglass hardtop. The open aft section can be closed off with Isinglass for three-season comfort. Fresh air is forced into the enclosed deck through opening side windows that happen to be hinged from the rear to scoop air into the deck while underway, and an overhead hatch. Otherwise, opt for the reverse-cycle AC system to maintain climate control.
Most notable, however, is the massive single piece windshield providing a view ahead without the encumbrances of a center window frame that serves as nothing more than an overhead support. Without the burden of heavy weight above, this is the biggest advantage. The panoramic view is enhanced by a feature noticeable by only the most ardent Cabo spotters… the slight downward slope to the foredeck that is hardly offset by the mild bowrise in cruise configuration.

The cockpit is accessed by an offset walkthrough, slightly to starboard with three steps leading from the upper to the lower. There's plenty of open space, allowing this deck to be used for a multitude of purposes, some of which will be specific in the GT45X Tower version.

The layout of both versions are largely the same, but subtle differences will creep in as we get task specific.

All decks are teak. A second engine room access is through a hatch in the center of the lower step. An elevated bench seat provides an excellent vantage point to the cockpit for observing either the fishing action or simply being in a relaxed position while still being part of the party. This also provides an excellent place to relax while watching the wake shrinking in the distance.

The differences Between the Two…

Now when it comes time to convert the GT45X to the GT45X Tower, some additions make it task specific, but still a capable cruiser. For this reason, we can see how the Tower version may just be the more popular choice. It can fish as well as cruise, while the Express version is more geared to cruising only. Choose the single purpose or dual-purpose version.
Certainly the first, and most obvious addition to the GT45X Tower model is the tower. It mounts into the foredeck and cockpit caprails placing no burden on the hardtop. Ladders to both sides of the cockpit lead to an elevated operating station allowing a view of the water from a long way off. Additionally, there are six rocket launcher-style rod holders across the back, just over the cockpit and outriggers, increasing the spread presented to the fish. 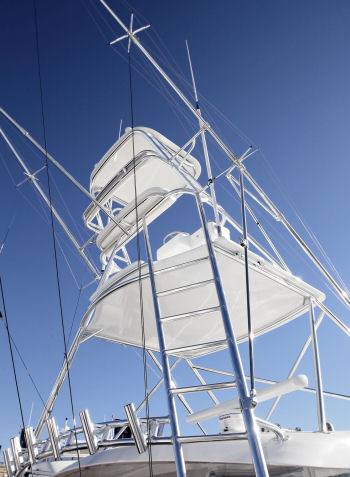 A tower added to the GT45X Tower model is the most easily distinguished difference between the two models.

Back in the cockpit, the deck is reinforced to accommodate a fishing chair or a teak leaning post in the center. Either will become the focal point of any fishing expedition. To the starboard side, a rigging station also includes an electric grill for preparing the fresh catch for the dinner table. Under the deck is a pair of insulated fishboxes. In the transom is a molded-in 56-gallon (211.98 L) livewell. 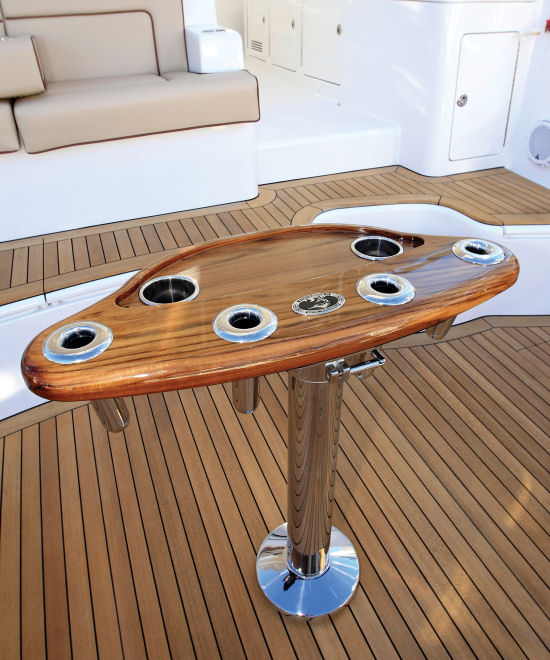 Choose from this center-mounted teak leaning post or a fighting chair mounted to the backing-plate reinforced deck.

If there was ever a “best of both worlds” boat, then the Hatteras GT45X Series is certainly a representative example. Whether the interests lie in offshore cruising or fishing, this yacht can be rigged either way. In fact, the GT45X Tower version can easily do both, seamlessly transitioning from one to the other with little more than a hose down to facilitate the changeover.
These models also represent the company’s forward thinking in taking an existing model, and making it better by combining the best of two of yachting’s powerhouses into one exquisite boat. The result is a true Hatteras that brings the builder back into the realm of offering a sub 50-footer, something it hasn’t done since the late 90s, and places the brand back within reach of a whole separate demographic of boaters and buyers. 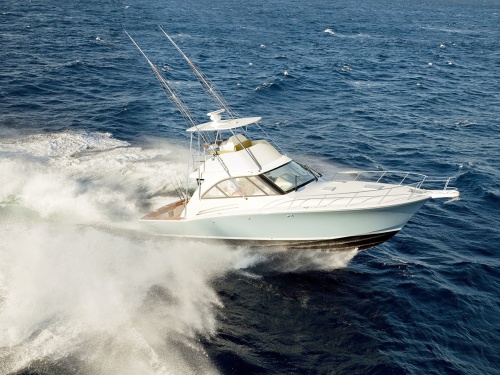