Following up on the success of the NC9 and NC11, Jeanneau is now introducing the NC14. The mission of this 45' boat as described by the builder is to be an "apartment on the water with terrace and sea view." Many of the innovations that we saw in the NC9 and NC11 are employed once again in this larger boat. The smaller boats reminded us of a floating beach house because they were designed for real living and heavy use as day boats and on long weekends. 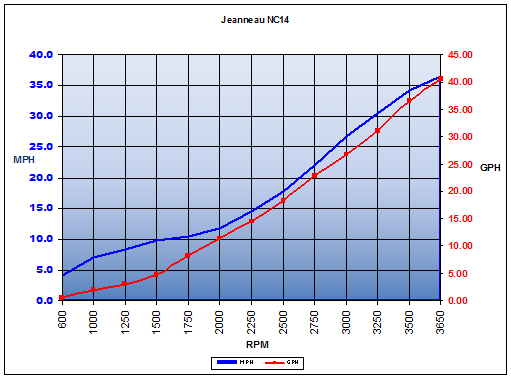 The Mission of the NC14

Jeanneau's NC Series is intended to be an affordable, practical boat for a family and its guests to enjoy the pleasures of the water and sun. At 45' this model can do a bigger and better job of both of these things than her two smaller sisters. The builder envisions the boat as an "apartment on the water." 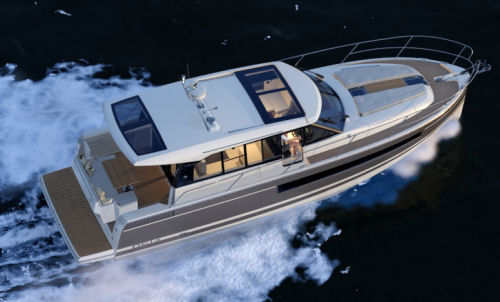 In this computer drawing note these features: side door by the helm, automatic sliding sunroof, aft deck seating extended abaft the transom for more room on deck. The cockpit seat and table transform into a sun pad.

This boat has an underwater wedge shape which is a bit more exaggerated than usual. The builder tells us that this design enables the boat to have a lower bow rise in a wider range of speed.
The NC14 is sharp and shallow forward, then the bottom shape extends out to have wide, relatively shallow stern sections. The wide stern has the advantage of added buoyancy aft where it is needed to support the Volvo Penta D4 IPS400 or optional D6 IPS500 diesels, and the shallow V means that the hull will be easier to push. The beam will also add stability and helps keep the draft to just 3'5", which is an ideal depth for places like the Bahamas, the west coast of Florida and the Baltic Sea.
●

Plumb bows have been in fashion lately in large motoryachts and some cruising boats and specialty boats like the Wally series. Because of it the hull length is essentially the same as the waterline length (LWL). With this design there is no wasted space inside the boat due to long overhangs at the bow and stern. This design saves weight in addition to being distinctive.
●

When we compare the NC14 to other express cruisers in her length, we find that she is lighter than many of them. This helps with her draft and also means that she will be easier to power.

This is the two-head layout plan of the NC14. Note that the starboard head is also used as the day head in this version. We like being able to make the forward queen bed into two singles.

Boats that are lightweight require less horsepower to achieve the desired cruising speeds. That means that the NC14 can have smaller, lighter engines such as its twin Volvo Penta 300-hp D4s. 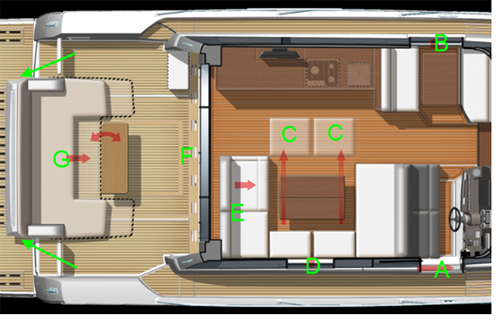 The "New Concept" means creating additional utility by means of clever design innovation. "A" and "B" are the side doors that are rarely seen in this size boat and make single-handed operations easy. "C" are two stools that when not in use stow under cushions adjacent to "D." "D" is an opening window. "E" is a seat back that swings forward to make an aft-facing lounge seat. "F" marks the four-part sliding door that can be moved to one side or the other to maximize the openness to the aft deck. "G" is the sliding settee on the aft deck that can be moved back beyond the transom (see arrows) to open up deck space for a cocktail party or to seat more people at the aft table. The table also swings over and lowers to make a sun pad.

There are few boats this size that can convert so many aspects of the boat to a secondary use. Some examples: her U-shaped seating on the aft deck converts into a large sun pad, the booth seating in the wheelhouse on the main deck can become an aft-facing lounger, and the queen bed in the forward cabin can be split into two single berths.

The main deck plan shows the two stools that can be used to seat six for lunch or dinner and the convertible nature of the sofa on the aft deck which can be made into a sun pad.

The NC14 was designed to appeal to people interested in taking advantage of the sun. She has three sunning areas plus a swim platform that can also be used for laying out. On the bow is a long, wide sun pad, the aft deck seating converts into a sun pad, and the booth seating to port of the helm also makes into a lounge and is right below the sun roof.

The swim platform is just over 3' (.91 m+) fore-and-aft, which means that it makes an ideal "teak beach" for swimmers. Everyone will love sitting on the platform when it is in the lowered position. This platform is also ideal for scuba divers, making it easier to get gear on and to get out of the water. A hydraulic swim platform is optional.

She doesn’t really lend herself to operating while standing. When the waves start coming, her straight stem tends to part the seas with practically no pounding whatsoever. In the light rollers on test day her 6-degrees cruising attitude caused an entry level about one quarter of the way back from the bow, keeping us more on top of the conditions while remaining comfortable, and she rolls 10-degrees into the turns. With the massive sunroof, side doors and wide aft glass doors all opened up it was easy to bring the outside in and really enjoy the weather as we cruised along the French Riviera. 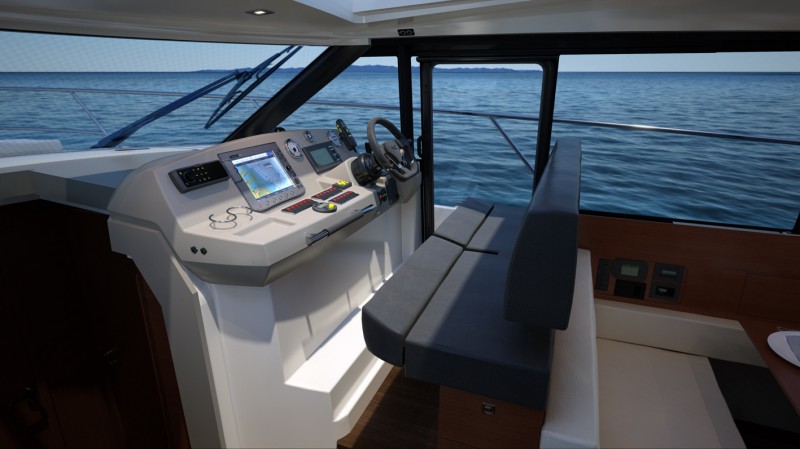 The helm seat is particularly wide on the NC14. The side door makes single-handed operations easier.

The helm of the NC14 is to starboard and features a seat that is wide enough for three people, although two would probably be most comfortable. Outboard of the seat is a sliding door to the side deck which makes it easy for the skipper to slip out on deck to tie up the boat when single-handed. 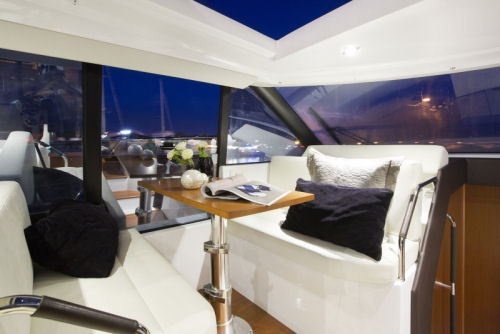 We like the booth-style dining table opposite the helm. This is an ideal place to eat when there are just four people aboard. Note the side door to port. 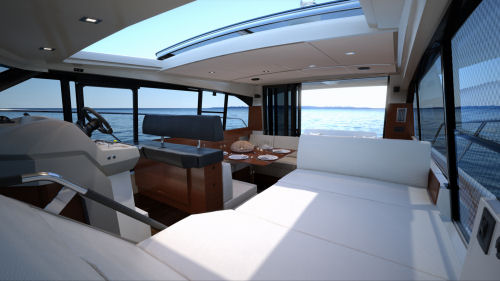 When the sun is out, but there is a chill in the air, what better place to get the rays without the wind?

Opposite the helm on the port side is a booth-style dinette large enough for four people. Obviously this table can also be used as a chart table. It also makes into a sun lounger.

Behind the helm is a U-shaped sofa with a high/low table. It can be easily transformed into a third double berth. In addition, there are two stools stored outboard that can be brought out so that six people can comfortably sit around the table for dinner. These two stools can also be used at the table on the aft deck. 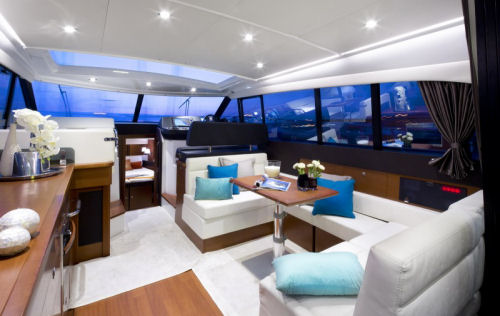 With the NC14, owners have plenty of options and can use spaces in different ways at different times of the day or on different occasions -- that is the "new concept."

The galley is opposite the sofa and is on the port side under a long counter that stretches from the dinette to the sliding door to the aft deck. Here are found all of the normal items of equipment for a galley, plus a flat screen TV that electrically raises and lowers into the back of the counter and out of the way.
The glass door to the aft deck is in four sections which can be moved either to port or to starboard. Either way it maximizes the opening between the interior and the aft deck.

Below there are two staterooms. Jeanneau allows the owner to select a layout with either one or two heads. Either way the port side head has a large separate shower and private access from the forward cabin. 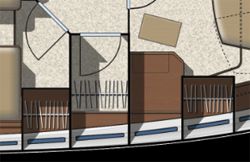 Consumers can pick the two head option (right) or opt for a built-in desk/vanity in the master and the extra storage of a walk-in closet (left). Note that there is a bi-fold shower door for the shower stall/toilet, which will keep half of the head dry.

In the two-head layout, the second head is located on the starboard side and also functions as a day head. This head essentially has two compartments, one for the sink, and one for the toilet.
If the owner decides to go with the one-head, this space is transformed into a desk located in the forward cabin and also into a walk in closet with hanging locker.

The master stateroom is in the bow and has full standing headroom around the foot of the bed. There are two large hanging lockers and adequate storage. The bed is queen sized and has the added advantage of being able to be split and moved outboard, port and starboard making two single berths. 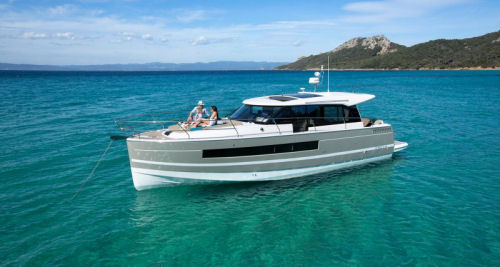 The NC14 was designed for the gin-clear waters of the Mediterranean, the Bahamas, or the tropics anywhere.

The guest stateroom is to starboard and has full standing headroom upon entering. However, the twin beds are tucked under the helm deck which is standard in this size of boat, so headroom over the beds is limited. There is enough room for sitting up and reading.

The boat comes standard with twin Volvo Penta IPS400 units. The D4 diesels develop 300-hp each. By using pod drives Jeanneau is able to move the engines aft plus improve upon the speed and fuel efficiency of what these relatively small engines could provide if they were in a standard inboard configuration.
Those carrying a lot of equipment onboard and looking for higher top speed can select the twin Volvo Penta IPS500 D6 diesels that develop 370-hp each.
The pods permit the boat to have a joystick option. A bow thruster is also available. 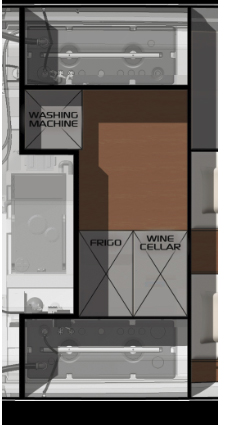 The utility room under the main salon is huge. Note that there is space for a washer/dryer, a wine cooler and a freezer. Alternatively it can be used to store water toys, dry goods, and other supplies. 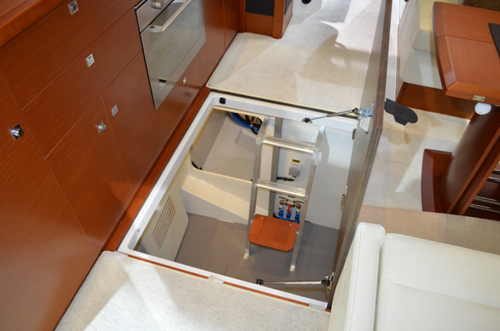 We like this access to the "utility" room because there is nothing to move in order to open the hatch. Note the aluminum ladder. The space is ideal for a wine cellar.

Because the engines are so far back in the boat a large area below is opened up under the galley and seating area for a "utility" room. This is the place to store water toys, cushions, folding chairs, cans of oil and cleaning supplies. It can also be used for other amenities. 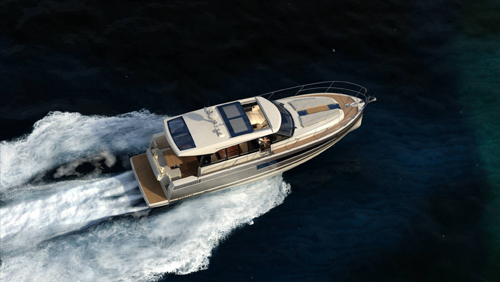 She certainly looks fast in this computer-aided drawing.

Having been aboard both the NC9 and NC11 we can attest to the practical nature and abundant utility of these two boats. We suspect that the NC14 carries on Jeanneau's "New Concept" theme and approach as well as making her affordable.
The NC14 has been designed to be economical to operate. With the pod drives and depending on the engine choice, her fuel consumption should be about as economical as possible in this size boat. We have yet to hear from Jeanneau what the MSRP will be, but like the other two boats in the series, we are assuming that the price will be quite competitive. 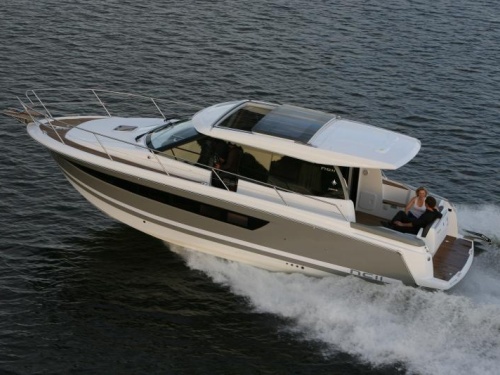 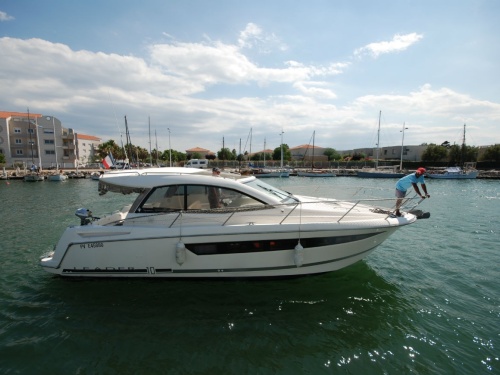 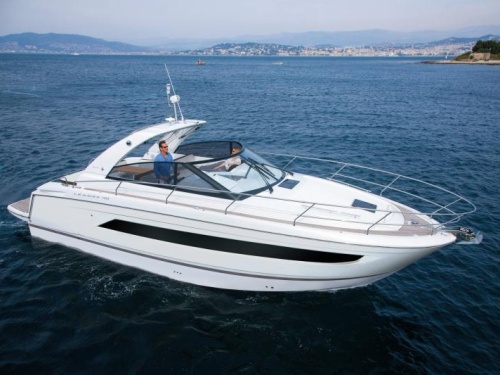 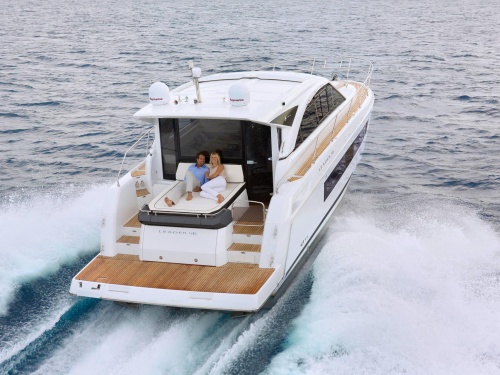