With an overall length of 22'6" (6.86 m) and a CE Category of C-7, the Jeanneau Leader 6.5 can accommodate up to seven people and retain her inshore rating for coastal waters, large bays and lakes. Full, 360-degree visibility from every seat allows everyone to enjoy the scenery or keep an eye on skiers or other towed devices. Dual swim platforms and a boarding ladder provide access for swimmers and other sports enthusiasts. A forward cabin sleeps two. Powered by a single outboard up to 200-hp, the Leader 6.5 can live on a trailer, a rack, or in a slip between outings. 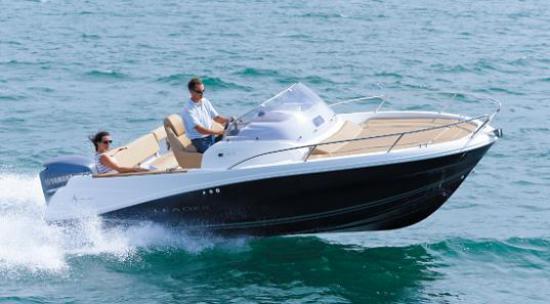 The Jeanneau Leader 6.5 rides comfortably on a plane.

Jeanneau calls the Leader 6.5 “the family boat”. The Leader 6.5 injects a little style and pizazz into family boating. A modest forward cabin transforms this runabout into an overnight or weekend cruiser for those who like a camping out experience.

The runabout category is all about convenience; ease of access and being able to get out on the water in the time it takes to put on a little sunscreen. The 6.5’s mission is to get families and friends out onto the water for a day of fun with the option of dropping anchor and spending a joyful night under the stars for a young couple.

• Design elements from the larger Leaders

• Closed foredeck for safety at sea

Soft chine at the bow and a deeper V help the Leader 6.5 negotiate chop.

The Leader 6.5 gets its design inspiration from the Leader 7.5, which the company web site refers to as “distinctly young, dynamic and sporty style.” Jeanneau’s decades of experience in boat production enable the company to exploit relationships with top-tier talent like the Leader 6.5’s designer, Patrice Sarrazin. 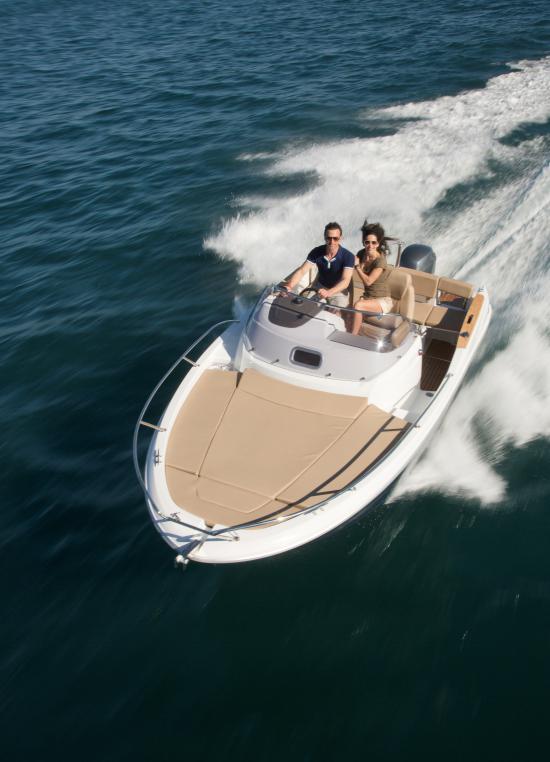 The bow section of the hull flares to create more space down below and preview the 8’1’’ (2.48 m) beam. With a length-to-beam ratio of slightly above 2.4, it’s obvious Jeanneau wanted to build in more comfort at slower speeds in protected waters.

We have not tested the Leader 6.5 and can offer no first hand opinion or fact on her performance or handling. However, Jeanneau has supplied to us performance data based on Yamaha test figures with two different outboard engines, the 150-hp Yamaha F150 LB Mechanical and the 200-hp F200 XCA Electrical. 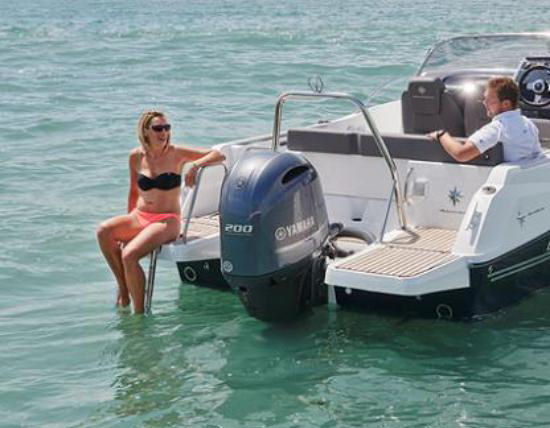 The swim platforms of the Leader 6.5 are relatively high off the water, but remember that ABYC standards call for the reboarding ladder to extend 22” (55 cm) below the waterline. We find the swim platforms relatively wide for this size and beam of boat. This boat is fitted with extensions to its molded-in swim platform, which we recommend. 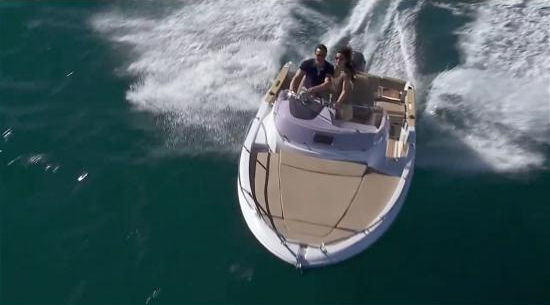 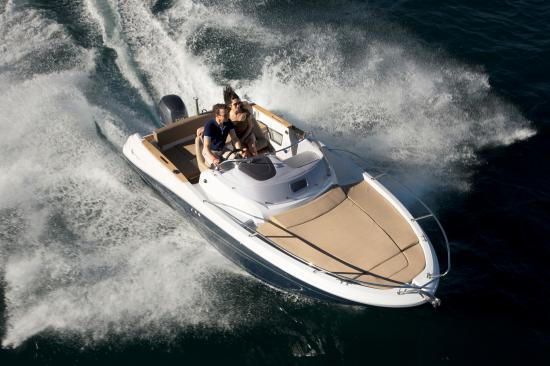 Wake from the hull is more evident at lower speeds before getting her up on a plane simply because the boat is displacing more water. 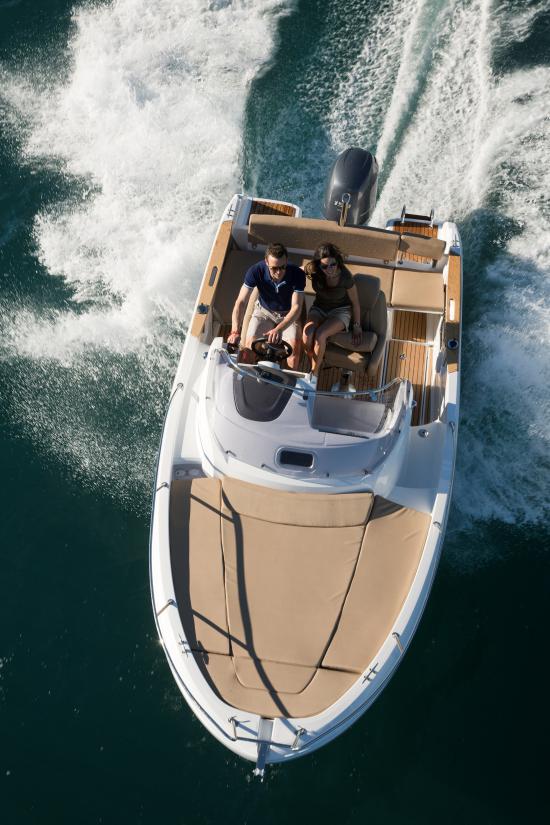 This boat’s wake is further aft and more compressed near the hull when she’s moving at planing speeds, as one would expect.

At top speed, the 150 consumes 15.4 gph, giving a Leader 6.5 equipped with the F150 LB Mechanical a range of about 82 nm. The same boat with a 200 consumes 20 gph resulting in a range of about 72 nm. Both calculations consider a reserve of 20% fuel capacity, which is Jeanneau’s standard.

The length and height of the forward berth push the helm station and pilot/co-pilot chairs aft. We like the companion seat.

Jeanneau has loaded a lot of boat into the Leader 6.5’s 20’ (6.10 m) length. The 6.5 starts its economic use of space by recessing the outboard motor between swim platforms. 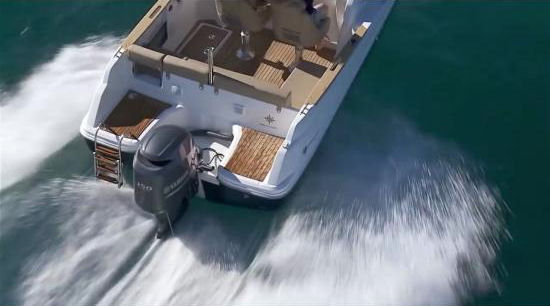 Swim platforms on either side of the single outboard allow one swimmer to dive in while someone else climbs the boarding ladder. We don’t recommend operating the boat when the ladder is deployed. 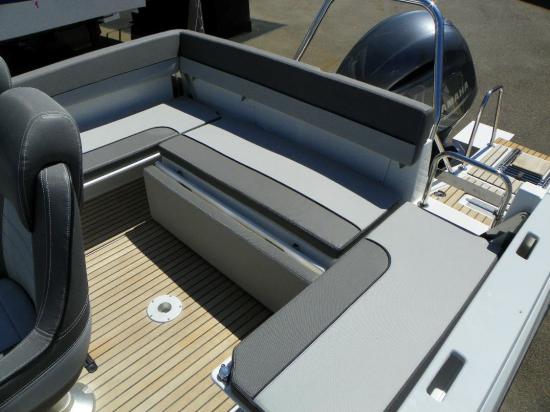 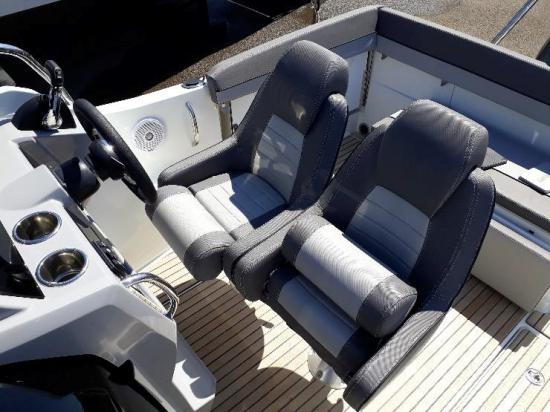 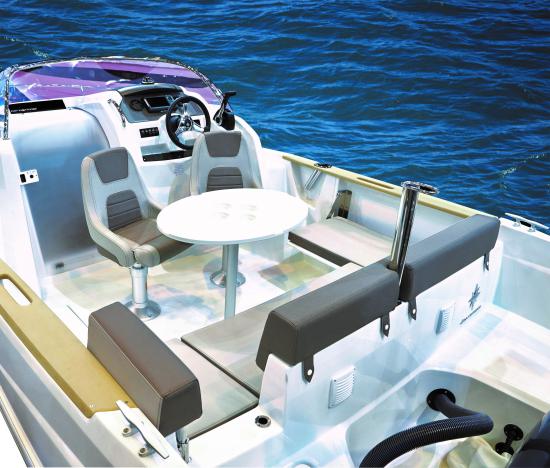 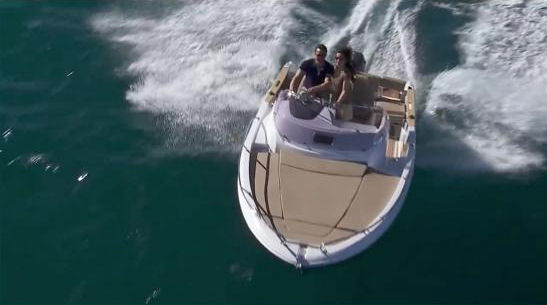 Step-up, deck passage on either side of the helm station gives access to a wide sun deck, completely enclosed by the bow pulpit (optional, pictured here). But, as can be seen here, the port side passage forward is wider and deeper and is the intended way forward. 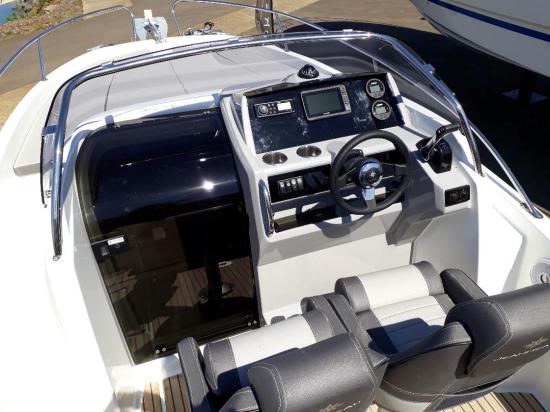 Step down, cabin access (portside), and a molded, tilt-up hatch cover shields the cabin from spray. A chrome grab rail encloses the forward part of the cockpit just inside the windshield, providing hand holds for pilot/co-pilot and anyone moving forward on either side of the helm station.

Electronics, including stereo (optional) are positioned just below the driver’s line of vision while underway. The angled mounting surface and dark color reduce glare in the windshield.

Each seat has its own molded cup holder prominently placed on the dash. Operators barely need to look away from their course to grab drinks, or to spy the chart plotter.

Throttle and wheel are right where the pilot’s hands can access and operate them easily. Another chrome grab handle offers additional stability for the occupant of either helm seat as well as people going down below. Trim tab controls face the driver beside the wheel. 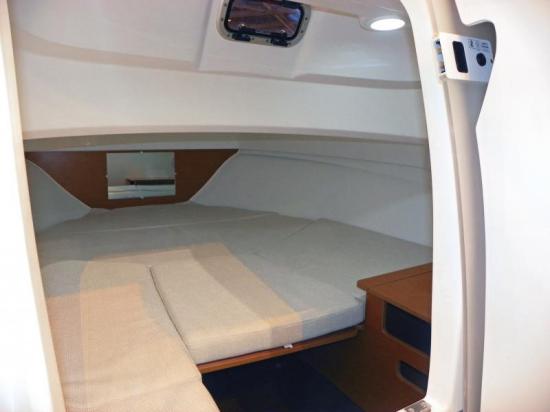 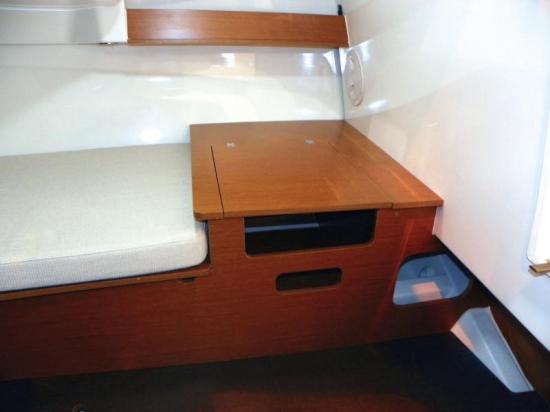 An optional chemical toilet/Porta-Potti hidden below the hinged access door can be fitted. 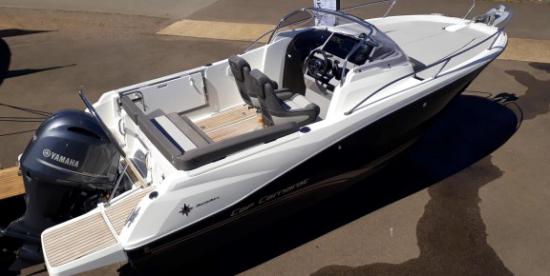 Here we can see the extensions to the molded-in swim platform which actually extend aft of the powerhead when lowered. This makes launch watersports more convenient and is safer.

Jeanneau uses vacuum resin infusion molding, a process used for the entire boat (deck and hull) for superior weight control and a fine finish. For a level rating series (CE Rating), there must be minimal variance in the weight of each piece produced. Jeanneau’s controlled vacuum resin infusion molding yields a reinforced composite for enhanced performance. Each composite element of the deck and hull are weighed prior to assembly. This is unusual in powerboats, but is required in sailboat one-design racing classes.

The Jeanneau Leader 6.5 begins with a basic model, but like most other new boats, the stuff buyers really want comes as add-ons. For example, the Garmin ECHOMAP Plus 72C comes with the boat if you select the Electronics Package, or upgrade to the ECHOMAP PLUS 92 SV.

Jeanneau has bundled some options in what it calls the Premier edition. Premier includes: 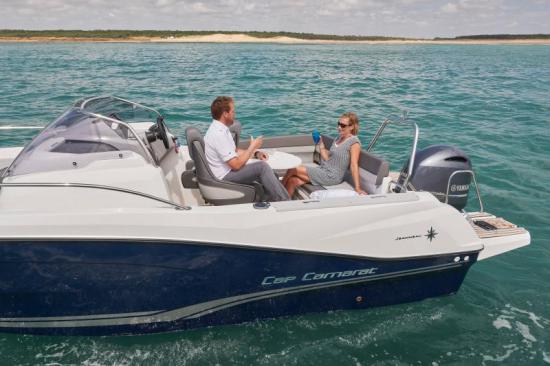 The aft cushions and aft bench backrests are standard equipment with the Premier Edition. The arched tow pylon is an option for either version of the Leader 6.5.

Most of the items on this list relate to comfort. All Leader 6.5s have the option of these individual add-ons:

• Backrest for starboard side bench

Some of these options are things you’d expect on a bigger boat. Adding things like the anchor is a necessity. A toilet, fresh water and shower turn the Leader 6.5 from a daytime sportboat to a weekend cruiser.

Jeanneau does not publish an MSRP for this boat. However, we suspect that it is around $70k for the base boat. 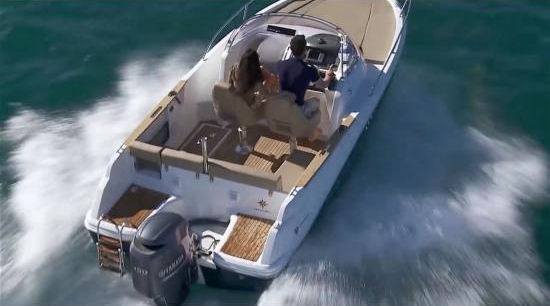 The Jeanneau Leader 6.5 was obviously designed for the European market which places a premium on sun bathing. Americans will also like the watersport aspects of the boat.

The Jeanneau Leader 6.5 is essentially what Americans would call a “cuddy” sportboat. In the 1960s, virtually all sportboats were cuddys, but once the bowrider concept was introduced it took the class by storm. Today, cuddys account for only about 3% of the conventional sportboat market in the U.S. – which has dwindled to only about 20% of what it was 20 years ago. That is why many American sportboat companies don’t even build cuddies anymore. The ones that do, have only one or two models – and those are usually intended for the export market.

So, why is Jeanneau introducing what amounts to a cuddy to the U.S. market? The answer seems to be that it is taking advantage of the American consumer’s current switch from sterndrive power to outboards, and the Leader 6.5 is an outboard. It is also not exactly a cuddy – because it does not have a traditional crown to the foredeck which made sun bathing problematical. The Leader 6.5’s foredeck is flat and ideal for its function.

Also, this design has proven its popularity in Europe both with Jeanneau and other brands. Sunning has a higher priority in Europe than in the U.S. Perhaps Jeanneau thinks the Americans are ready for a change, and in any case, this boat should appeal to early adopters.

Finally, there are many people who romanticize Italian and French designs because they are different, sassier, and signal that the owner is not one of the pack and likes to own something different.