If you doubt that Riva speedboats are objects of worship among the yachting cognoscenti, here's something that might change your mind: The Aquariva Super, just 33' 0" (10.07 m) long, costs upwards of $1,000,000, but after her debut in 2000 it took Riva just six years to sell 100 boats; the company celebrated with a special edition, the Aquariva Cento, in 2006. (In the past couple of months, two more special editions of the boat have been introduced, one created by Gucci, the other by designer Marc Newson.) A direct descendant of maybe the most famous Riva of all, the mahogany Aquarama, the Aquariva carries on a boatbuilding tradition started 168 years ago, when Pietro Riva arrived in Sarnico, on the shores of Lake d'Iseo in northern Italy. 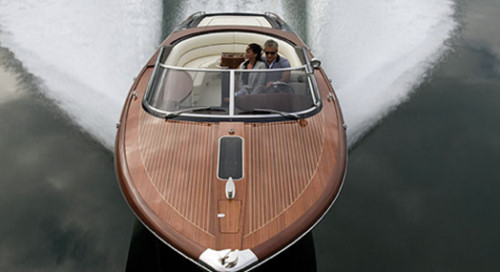 Although the Aquariva's hull is fiberglass composite, not mahogany like her Riva forerunners, her deck is mahogany inlaid with maple. Riva craftsmen carefully select the woods to ensure matching grain and color, and finish the deck with 20 coats of varnish.

The Aquariva Super is built in the same shipyard that Pietro Riva founded in 1842. Riva, the man, was a carpenter and joiner who traveled from his home on Lake Como to Sarnico to earn a few lire repairing boats in the wake of a fierce storm that destroyed much of the lake's fishing fleet. (Sarnico is about 70 km northeast of Milan.) He never left, but opened his own shipyard building not yachts, but ferries, cargo boats and fishing craft. The business passed down, father to son, for generations. In the 1920s Serafino Riva started building motorboats, and by World War II, Rivas had set many speed records and won many trophies. 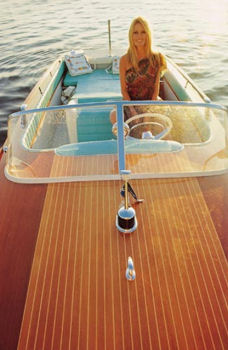 In the 1950s, Brigitte Bardot sported around the Riviera in her own Riva Florida. Today, both Sean Connery and Sophia Loren own Rivas.

In the 1950s, though, under the management of Carlo Riva, Riva boats became what they are today, the epitome of elegance, craftsmanship and style. Using only the finest materials assembled by the most skilled and experienced craftsmen, Carlo Riva built boats for kings and queens, sportsmen, movie stars and just plain rich people. King Hussein of Jordan owned a Super Aquarama, the Shah of Iran (then he was the Shah of Persia) a Riva 2000, Elizabeth Taylor and Richard Burton a Riva Junior that served as the tender to their motoryacht. 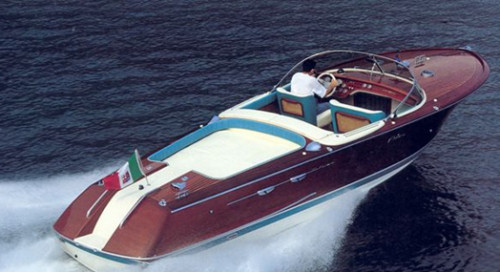 The Aquarama epitomized elegant speedboating in the 1950s and 60s, and today well-kept and restored classic Rivas still demand high prices. The Aquarama was finally discontinued in 1996.

Today Riva is part of the Ferretti Group, along with other first-echelon yachtbuilders like Ferretti Yachts, Mochi Craft and Bertram. The company builds a wide range of yachts, from the smallest, the Aquariva Super, through the 116' (35.40 m) Athena. 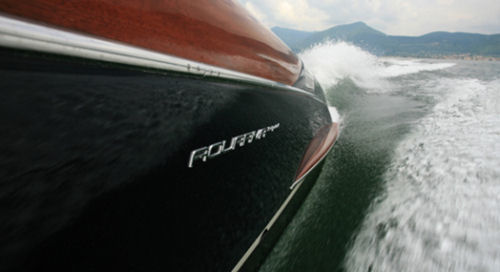 Aquariva Supers maintain the standards set by Carlo Riva in the 1950s, although their hulls are built of modern materials using cutting-edge technology. Traditional craftsmanship is still evident in their joinery and details – although we're surprised the stainless rubrail sections don't match up more precisely here. But we guarantee the slots in the screw heads are all perfectly aligned.

At the moment there are three versions of the Aquariva available: The standard Riva version, the Aquariva Super; the Aquariva Gucci; and the Aquariva by Marc Newson. All three boats are essentially the same, but differ in styling and details. All have the same power, twin 380-hp Yanmar 6LY3/UTP diesels linked to two-speed electronic gearboxes. Top speed is between 41.5 and 42 knots, according to a Riva spokesman; we haven't tested any of the boats ourselves. Cruising speed is 36 knots, and you can expect approximately 150 nm of range at that speed.

The standard layout is simple: A U-shaped lounge in the cockpit with a small table to hold drinks and snacks; a helm station; a head and a couple of V-berths below. We doubt many owners sleep aboard their Aquariva Supers.

The standard cockpit is built for one person to drive and everyone else to socialize on the wraparound lounge. The table has bottle holders built in; we bet bottles of Dom Perignon will fit in them.

Sold through Riva dealers worldwide, the Aquariva Gucci is a limited edition model customized by Gucci's creative director, Frida Giannini. It celebrates Gucci's 90th anniversary in 2011. Built to order, the Gucci edition features a white hull (they say it's Gucci's own "hue" of white), a green crystal windshield and accents reflecting Gucci's red-green-red web detail, like you have on your loafers. Fabrics are by Gucci. Our man at Riva says the price will be a "little more" than a standard Aquariva.

The Aquariva Gucci differs from the Super mostly in hull and cockpit color and details. The boot stripe is the Gucci red-green-red pattern you see on lots of their products. 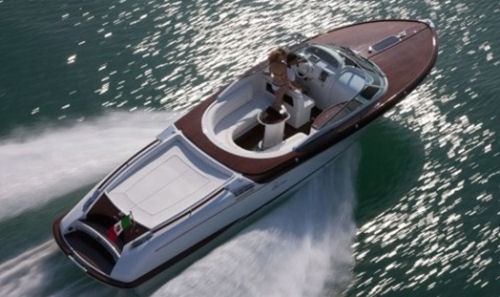 Here's another view of the Gucci-designed Aquariva.

More customized is the Marc Newson edition, officially the Aquariva by Marc Newson. Only 22 units will be built, all sold exclusively through the Gagosian Galleries. (There are Gagosian Galleries in New York City, Beverly Hills, London, Paris, Rome, Athens and Geneva.) Newson, a native Australian and one of the world's foremost designers, said that when he was a kid, "post-war Italian design was a huge source of inspiration. My own career has undoubtedly been influenced by the Italians' ability to impact so many areas of design." Although he's completed major projects in aviation, aerospace and automobiles, the Newson Aquariva is his first nautical project. 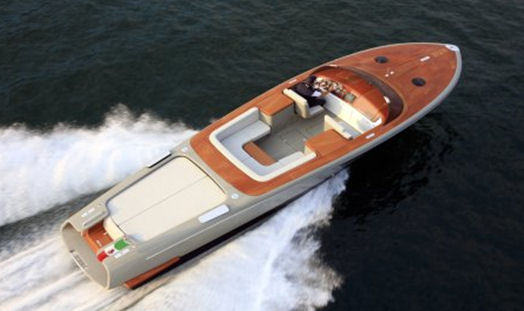 Newson redesigned the cockpit to include helm and passenger seats, squared off the lounge and radically altered the transom. Instead of stainless steel, he specified anodized aluminum hardware. And he added a bow thruster. 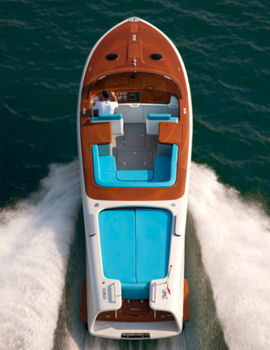 Instead of varnished wood, Newson used phenolic composite for his Aquariva decks and helm. It's more durable than wood, but has, according to Newson, an "organic feel and aesthetic." Phenolic was developed in the first half of the 20th century. What's Newson's reasoning behind the unusual transom? We haven't a clue – but it looks kind of cool. Maybe that's the reason.

Should you buy a Riva Aquariva Super? If you've got the cash and you want something really special, why not? It's a million-dollar boat with no real purpose other than riding around and posturing, but that's OK, too. It's one of the nicest boats you can buy, and it will prove to others that a) you have exquisite taste and b) you've got a ton of mad money burning a hole in your Swiss bank account.
Rivas don't have much in the way of competition, but just for fun we looked at the Chris-Craft Corsair 33, about the same size but with much more accommodations belowdecks. (The man who resurrected Chris-Craft ten years ago and is still the company chairman, Stephen Julius, owned Riva from 1998 to 2000; he developed the Aquariva, so the Chris-Craft is an appropriate comparison.) With twin 300-hp Volvo Penta diesels and a load of optional equipment, its price is about $500,000, half that of the Riva. But it's not a Riva – not that a Chris-Craft is bad, it's just not a Riva. Is the nameplate and aura of the Italian boat worth half a million? It's your call. We might stick with the Corsair, but then, we don't hang around the Riviera that much. 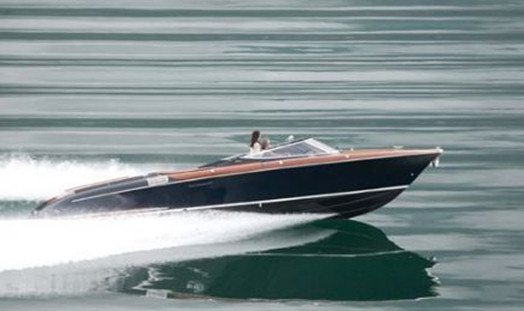 Yeah, it's cool. But is it worth the upcharge? Only you can decide. If you're wearing a Patek Philippe watch, or driving a Bugatti, we think you'll say it is. 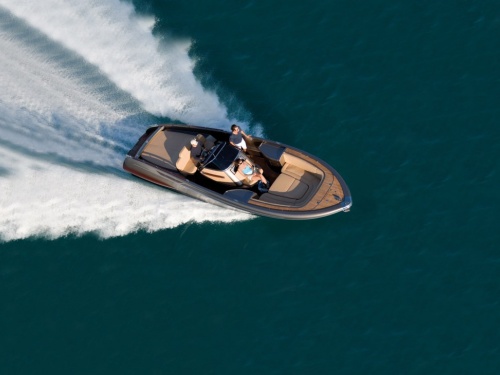