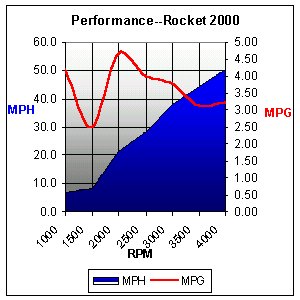 The Rocket 2000 really is a pocket rocket that fulfills a unique niche…she’s a go-fast boat with a racing feel in a compact, 20-foot package. She’s got the responsive wheel and Mercury Zero-effort racing controls like the big boys, but with a jet-boat performance and a penny-wise price tag that can get almost any boater into a 50+ mph performance boat.The first thing you notice about the Rocket is the air-brushed graphics on her foredeck and the complete lack of a hull-to-deck joint. The bow looks more like what you’d find on a racing kayak than on a powerboat. Below this sealed area is the 30-gallon fuel tank, strategically positioned to balance the weight of the 220-hp MerCruiser 4.3L carbureted sterndrive found on our prototype test boat.
The sterndrive model has seating for four—two forward, two aft, with the helm to starboard (she’s available with outboard power as well that provides seating for six.) I found it was an easy reach to the throttle, and on a boat this small—and with this much power—the throttle gets a continuous workout. Unlike many raceboats, the Rocket’s helm gauges are spread out across the dash horizontally, which makes for a little more scanning, but they’re all easily big enough for clear visibility. The helm area also has an acrylic windfoil, and though it offers little protection from wind and spray, it does look cool. Maurice Richard, the company’s president, says they may add a vertical lip to this foil in the future…but then again, you don’t buy a boat like this because you don’t like the feel of wind in your face. About the only downside to the helm was the lack of a safety shut-off switch, which Richard says can be added as an option.
Aft, two jump seats flank the flip-up engine box, which was in dire need of a gas-assist strut (or some positive means of support) on our test boat. Richard says that will be available on the production model. Once opened, it provides great access to the powerplant to service all fluid fills, and there are two fiberglass stowage compartments (not netting) on either side of the engine…a nice, safe touch.
While the Rocket 2000 also has an integral swim platform, its utility will be limited to the very agile since there’s no swim ladder here. But again, the boat’s not a cruiser, she’s a racer, and speed is what she’s all about.
Out on the race course, we got a top end of 50.2 mph, but the boat was admittedly overpropped and we had some relatively rough conditions on test day. According to Richard, the boat will hit 60-mph under ideal conditions (read: mirror-flat water). The reality is that once you go past 30-mph, even a small roller will cause the Rocket 2000 to bounce, a situation that’s exacerbated by trimming the drives out to increase speed. Against that, in the early morning, flat-water conditions on test day, she handled like a jet boat but without the skidding, carving aggressively through turns and slingshotting out of the turn and on to her new course with absolute precision. She also exhibited a beautifully smooth ride when skimming across the chop, with absolutely no tendency to pound or re-align your vertebrae.
Overall, the Rocket 2000 is best suited for lake use, but can also be fun in protected saltwater areas where you’ve got plenty of room to air her out. One thing's for sure…pull up to a waterfront restaurant in a Rocket 2000 and while you may be the smallest boat there, you’ll get all the attention.