Tiara Yachts’ new 4800 Convertible is a sign of the times. She is Tiara’s largest convertible, she has three staterooms and two heads packed into 48’, and we can see her going toe-to-toe with even bigger battlewagons. In many respects the Tiara has all of the functionality of a 55’ convertible but is on the order of $700,000 less than 6-sleeper convertibles in the mid-50’ range from top-tier builders. And, Tiara has always been a top-tier builder, right there with Viking, Hatteras and Bertram, although generally building smaller boats. The Tiara 4800 Convertible might just be a giant killer. With clever design, Tiara (which is not known for building inexpensive boats) has produced what we think is a remarkably good value for someone looking for a large battlewagon for offshore fishing, or just plain cruising and entertaining.

The new Tiara 4800 Convertible packs a lot of functionality into 48’ and we think that it has anticipated the new paradigm coming to boating – downsizing.

As you can see from the accommodations plan above the Tiara 4800 Convertible has a third cabin shoe-horned into the starboard side and has nestled part of it under the settee in the salon. This is a clever and creative utilization of space. Just forward is the stacked washer/dryer that every boat this size should have, but some don’t.

In the forward cabin Tiara has a double berth on the bottom and a single up on top which makes use of the bow flair. This is an old, tried-and-true configuration that works well on a convertible. When the boat is full of guys out fishing for a few days, the two berths are used as singles. When the boat is in cruising mode and there is a husband-and-wife couple in the forward cabin, they can cuddle up in the double (women love it that way). Or, of course, the couple can use the two singles and get some rest. We haven’t seen this configuration much in 20 years, but we far prefer it to the centerline queen berth that most builders install and which is very limiting in its function. Thank you Tiara Yachts for bringing back a good, old idea. 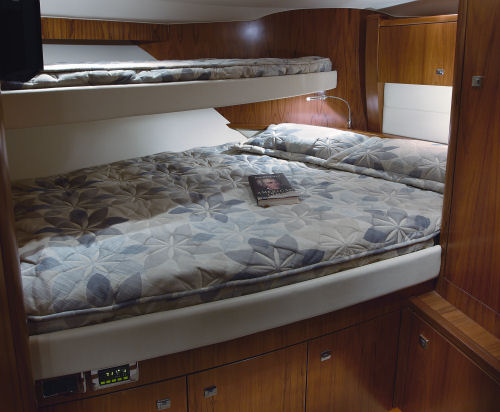 The forward cabin is relatively roomy and has a double and a single above.

The master stateroom is wrapped in lots of wood paneling that have sweeping curves that give what is a relatively small space a cozy, functional yachty feel. We think Tiara has done a terrific job of providing both three staterooms in a small space. 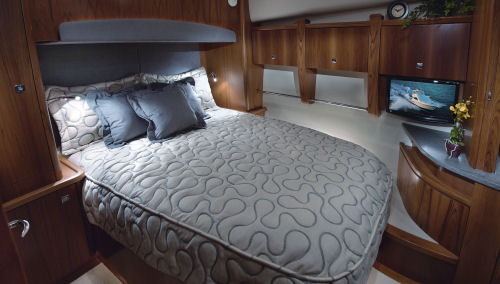 The master stateroom. Note the curves almost everywhere that make this design work.

Frankly, the heads are surprisingly large given all that is going on here and please note that both the toilets and the sinks or showers can be used at the same time. Again, Tiara designers have made relatively large radiuses on the bulkheads and cabinets and this gives the yacht a pleasing, soft look and actually creates the illusion of there being more room than there actually is. 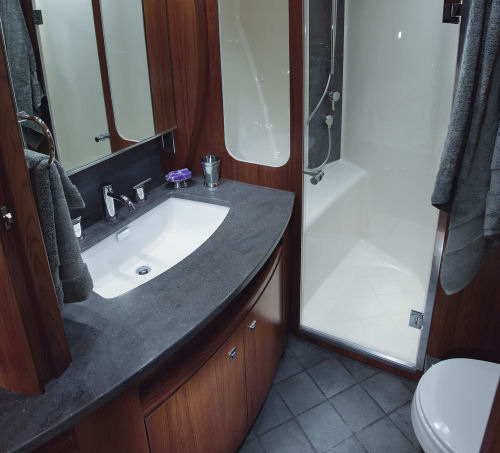 Master head. Note the radius of corners in the shower and cabinet doors.

This is one of our prerequisites for a cruising heads – namely that a couple can use the head at the same time getting ready for a cocktail party, or an early-morning posting on the bridge. Tiara has accomplished that trick, which is the sign of good yacht design. 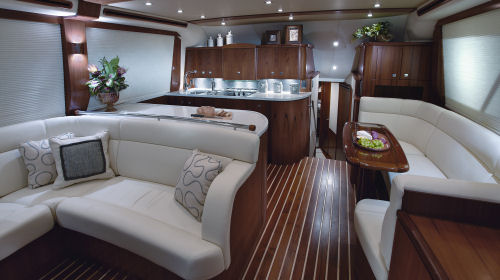 From the door to the cockpit looking forward with the galley in the background.

The main salon is conventional in concept, put better than conventional in execution. Note that the aft counter in the galley has a sweeping curve. Likewise the forward part of the sofa has a curve and the settee is oval. All of these pleasing curves keep the salon from having a squared-off, boxy look as you see in some convertibles this size. The flat screen TV hides away in the entertainment cabinet on the starboard side of the boat. 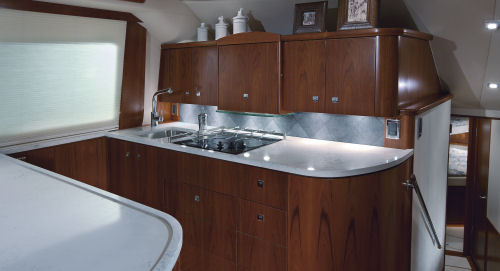 You might wonder why space-conscious Tiara designers did not take the cabinets all the way up to the overhead in the galley and rather chose to put pictures of the kids there. The answer is that there is an optional skylight available for that space. Look closely and you will see that Tiara has but a slight lip on the edge of its counters. This is better than nothing, but falls short of proper fiddles that should be on all boats this size.

The sofa can be made into a double bed so you can sleep two more people here, making the boat an eight-sleeper if you want to, in a pinch. Grandchildren love boats and will gladly sleep most anywhere and this is a good place for them.

The Business End is Critical

The cockpit has 140 sq. ft. of fighting space, a mezzanine, and all of the refers, fishboxes, baitwells, etc, that every convertible in class has. If you will be using this boat primarily for fishing and can live without the live well, you can trade it out for a fold away seat into the gunwale of the stern. If you are going to use this boat primarily for cruising and entertaining, we would recommend this option. 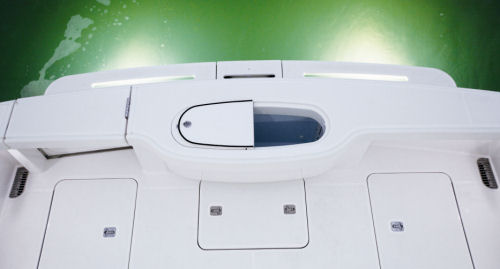 Full marks to Tiara for the large scuppers in the stern quarters of the cockpit.

Tiara has long understood that the dynamics of offshore sportfishing are changing, and all builders of convertibles will tell you that half of their customers buy the boats for cruising. Tiara was one of the first builders to pick up on that trend over 15 years a go, and the old Tiara 31 had seating tucked out of the way in the gunwales of its cockpit which turned in quite handy during cocktail parties aboard. 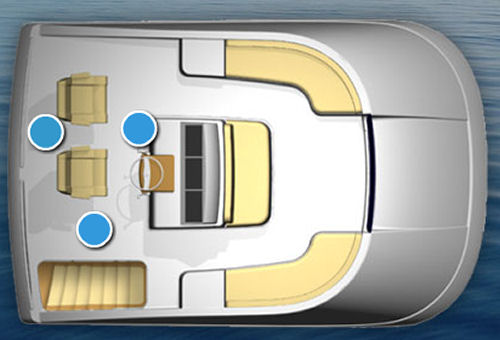 The flying bridge of the new Tiara 4800 takes its cue from the latest trends coming off the tournament circuit. The center console helm station allows the skipper to quickly move to the forward part of the bridge if he needs to. There is plenty of seating here, as much as on any 55-footer you’ll find.

The flying bridge of the Tiara 4800 has a center console helm. This is the flavor of the month on the offshore tournament circuit, but we are not convinced that it is an improvement on more standard layouts that extend the helm console over to the port side, but so be it.
Because Tiara is working hard to take care of two types of customers – both hard core anglers and cruising folks – the company has done a good job of taking care of both constituents with this layout. Note that there is a navigator’s seat next to the skipper’s chair. You always need two sets of eyes at the helm facing forward when running and hats off to Tiara for putting two seats there (some other builders have only one).

There is room for all of your electronics and most can be out of the weather. Note there are plenty of places for cell phones, sun glasses, etc. This is a superb helm console.

Also, by placing a bench seat in front of the helm, two people can face forward while running. Tiara tells us that the boat has about a 6.5-degree running angle at best cruise speeds, so it will be a bit more comfortable facing forward. This layout looks versatile.

We would move that table forward and make it into a counter and put the pipes holding the hardtop in line with the isinglass mullions to improve visibility.

Power for the Glory

These MSRP prices may seem like a lot of money, but if so, we invite you to take a look the cost of convertibles in the mid-50-foot range from America’s best builders. What we think you will find is another foot or so of beam, more displacement, somewhat more room inside, but about the same speeds and functionality. Virtually all of the boats will have two or three staterooms and two heads. Are these marginal improvements worth $700k or more to you? If so, go for it. 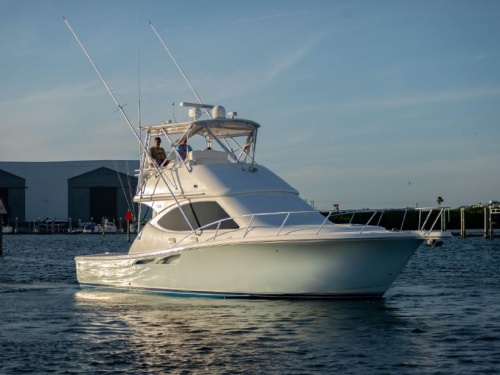