Did you ever wake up not knowing if you want a tournament-ready sportfisherman for chasing trophy billfish, or a long-legged motoryacht able to sleep half the neighborhood? With the Viking 82 convertible you don't have to choose because it is both. Constructed by one of America's most respected boat builder, the 83'5'' Viking is fast enough for canyon fishing, especially with the optional MTU diesels; and thanks to a beam of 22'4'', the cabin is spacious enough for four double staterooms and crew's quarters. Viking is amenable to lots of customization, too: Of more than a dozen 82Cs built (hull no. 12 will be at this year's Ft. Lauderdale Boat Show), no two have been alike in layout. But all have been steered by VIPER. 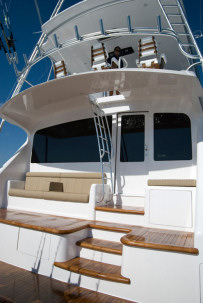 Today, a cockpit's not a cockpit without seating for an audience; the 82C has a comfy lounge for three or four on its mezzanine.

Glance at the specs and you'll see the 82C is a very big boat: LOA is 83'5", beam 22'4", draft 5'6" and gross weight, a whopping 162,250 lbs. with full fuel. However, according to our man at Viking, most buyers load the boat up with extra stuff, making her even heavier and potentially harder to handle. Big boats aren't known for nimble handling at best.
But this is Viking, a company that often has cool solutions to common problems. In this case, the 82C's handling is improved by the company's Viking Independent Programmable Electro-hydraulic Rudders, or VIPER. (We wonder how long it took them to come up with a reasonable name that also provided a catchy acronym?) Created for this boat, but now used on Viking's 76C and 70C as well, VIPER does away with the tie bar that connects the rudders on most twin-screw boats, allowing each rudder to rotate independent of the other. 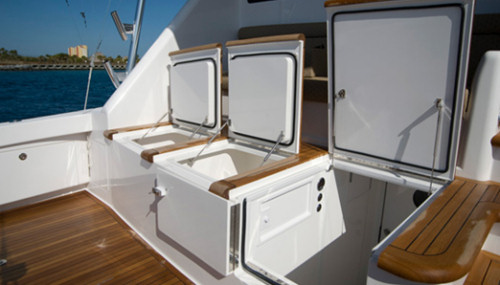 Engine access is just to port of the steps. There are two separate machinery spaces. Other hatches conceal freezers and stowage.

When managed by a captain-programmable computer (programming isn't necessary, but experienced skippers can fine-tune handling by doing so), each rudder operates with maximum effect and creates minimum drag. According to Viking, VIPER makes the massive 82C handle like a vessel half her size, a big advantage when chasing a trophy billfish, or just maneuvering at a crowded tournament start. VIPER also improves autopilot performance, they say. 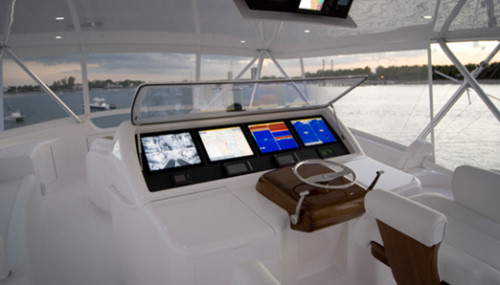 If you need more electronics than this, apply to NASA. We love the single-lever controls and the varnished teak box under the wheel. An enclosed bridge is optional, which turns this space into an upper-deck pilothouse.

Traditionally, convertibles have been all about fishing, with large cockpits, small deckhouse saloons and lower decks crammed with shoulder-hugging cabins. But when you get into the 80-plus-foot size range, with beam to match, there's room for a vast cockpit (a Viking rep told me that a mate working the port side has to communicate with one working to starboard by email), a saloon as spacious as you'll find on any motoryacht and cavernous, comfortable accommodations able to sleep more people than you probably want to bring aboard.

The 82C's Plan A layout puts the full-beam master stateroom amidships; the accompanying ensuite head has two sinks and a tub. We thought this was the perfect arrangement, with its private access from the saloon. But maybe not...

Plan B moves the master forward, with an angled berth. Private access is gone, and the head is in the very bow (hang on in rough water!), but the two twin cabins aft can be set up with private access for crew. Most 82C owners carry 2 or 3 paid hands. 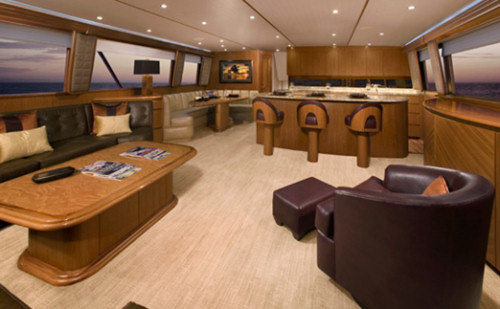 In both Plans A and B, the saloon is roomy enough for a full galley with breakfast bar, a dinette and a lounge with table. There's a head in the aft starboard corner (behind the camera in this shot) – fishermen don't have to traipse through the boat when nature calls. 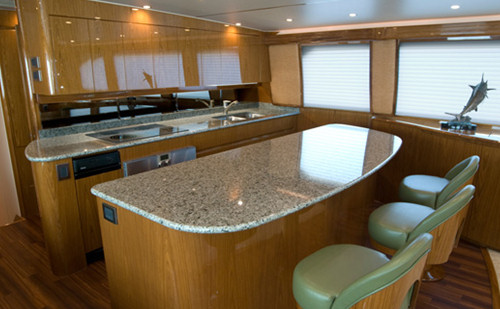 Like soldiers, fishermen travel on their stomachs, and the 82C's galley is set up to keep all the troops satisfied. The breakfast bar doubles as a countertop for serious food prep; a pantry forward of the galley can hold a freezer, or be converted to an extra cabin or head.

The engines and generators live in the main engine room, as you'd expect, but ancillary systems – pumps, A/C and so forth – inhabit a second machinery space. This keeps the engine room clean and uncluttered, making maintenance and repair of both engines and systems easier. All systems are managed from touch-screen Octoplex Power Controls located in the saloon and on the flying bridge – no one has to climb down to turn on the electric head, for example, or adjust the A/C.
Fishermen at this level like to roam far and wide, and throttling-back the 82C provides enough cruising range to go nearly anywhere not trans-oceanic; Viking estimates about 1,200 n.m. at 10 knots (that's almost idle). While running big diesels at low load for long periods isn't ideal for their happiness, for that once-a-year trip from the U.S. East Coast to Bermuda or south to Venezuela it's OK. Its ability to run fast for fishing trips, slow for longer voyages – and with plenty of crew comfort in both cases – makes the 82C a very versatile convertible. 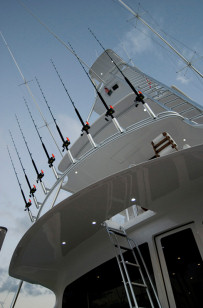 The tuna tower is so tall, it has freshwater piping inside the legs, and taps aloft, so the crew won't have to drag hoses up from the deck. There's also a spigot on the foredeck; otherwise, crew would screw multiple lengths of hose together for washdown, and the metal joints would mar the deck finish. The folks at Viking don't just build boats, they use them, too, and have learned most of this stuff the hard way.

Prices for the 82 Convertible start at around $5,700,000, but go up fast. Upgrading to the smaller MANs alone adds around $600,000, and most buyers want some level of customization – so far, of 12 82Cs delivered, no two have been the same. Viking will be showing a fully equipped boat at the Ft. Lauderdale International Boat Show later this month; rigged to fish, including a tuna tower and electronics, her price is about $6.5 million. 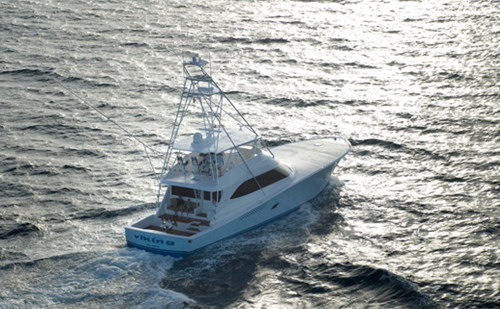 It doesn't get much better than this, even if there are no fish to be found. A fully rigged-for-fishing 82C will run you about $6.5 million with twin 2,400-hp MTU diesels; 1,825-hp Cats are standard. An enclosed bridge is optional.

When you start shopping for any boat in this size range, you'd better have deep pockets, and maybe more so for a convertible – speed doesn't come for free. And you'll need a captain and a couple of crew to maintain the boat the way it should be kept. And fish don't know what size boat is on the other end of the bait when they bite it, so spending the big bucks won't guarantee more trophies on your wall. But it will guarantee that you can go nearly anywhere to find them, as well as fish in comfort when anglers in smaller boats are turning green.
If you have the beans and the time to enjoy a boat like this and are willing to make the commitment, we say, Go for it! Viking is one of the Big Three American convertible builders; Hatteras and Bertram are the other two, and the three companies together build the world's best production convertibles. You won't go wrong buying a boat from any of them. Whether you choose the Viking 82C or a similar boat from another builder depends on personal preference, but we think you should take a close look at the 82C before writing a check. 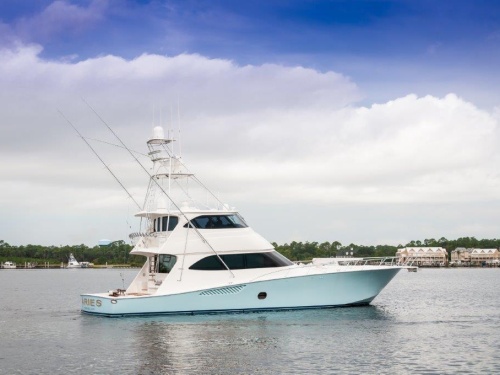