Viking Yachts plans on introducing their new 42 Open in February, 2011, at a VIP Preview in Florida two weeks before her public introduction at the Miami Boat Show. One of two 42' 7" (12.97 m) cousins – the other is a 42 Convertible -- announced at last year's Miami show, the Open combines a large, fishable cockpit and a center-console style helm with a two-cabin interior suitable for cruising. Not only are the 42 classmates the smallest Vikings of the modern era (the company built a 35 Convertible and Express in the 1980s), but they're also the company's first boats designed from scratch to be powered by Zeus pod drives. Is it wise for Viking to be moving into smaller, edgier boats in this economic climate? Our contact at the company said they've already sold 6 42-footers, and the first Open hasn't even been launched yet.

The 42 Open is the first Viking open sportfisherman with Zeus pod drives; a Zeus-powered Viking 42 Convertible beat her to the water by a couple of months. The two 42s are the smallest Vikings in the 2011 lineup. Engines are twin Cummins MerCruiser diesels.

We all know that pod drives are cool, but they do more than just add efficiency and maneuverability: They also add room for accommodations. How? Since pods are mounted through the bottom of the boat near the transom (they are essentially sterndrives mounted vertically, but much more sophisticated), engines in pod-driven boats are situated way aft -- in the case of the 42 Open, under the cockpit. This makes room for a cabin where the engine room used to be. Viking installed twin berths here, and by raising the bridge deck managed to achieve 6' of headroom, too. We predict these will be the prized berths for snoozing during the ride offshore to the fishing grounds.

The deck layout can make the difference between a prizewinning fishboat and an also-ran. Viking provides the 42 Open skipper with a center-console helm on a slightly raised platform to improve visibility both ahead and in the cockpit. Companions sit in either of two raised Murray Products seats that can swivel to watch the fishing action, or keep an eye on the sea ahead. There's stowage under the seats and P&S lounges. There are twin mezzanines in the cockpit, too.

Built on a Liner

The 42 Open's accommodations sit on a one-piece fiberglass liner. The liner not only creates a strong, stiff base for the furniture and makes the boat easier to keep clean, but it also makes building the boat more time- and cost-efficient. The joinery and much of the boat's electrical and plumbing systems can be installed on the liner before it, in turn, is dropped into the hull and then capped with the deck. Not only is it easier to do this work on the plant floor, rather than in the hull, but it also allows more craftspeople to work on the boat simultaneously. Viking wanted to make building the 42 as efficient as possible, and this is a good way to do it.

The standard layout comprises the mid-cabin with twin berths and a double forward. By installing the cabin sole between the stringers, along the centerline where the hull is deepest, and raising the bridge deck above, Viking achieved 6' (1.83 m) of headroom here, at least in the areas where the occupants will stand. The mid-cabin is a step or two down from the salon.

Also in the name of efficiency, there are a limited number of factory-installed options. Our contact at Viking said there are many opportunities for customization, and many options can be added to the 42 Open – the potential is there – but both will have to be done after delivery, not during building. An owner wanting to explore this can contact the nearest Viking Service Center or his own boatyard.

The optional layout loses the dinette in favor of a third cabin with over-and-under berths and a second head. We prefer the standard arrangement: The dinette can be converted to berths when needed, and we can live with one head if it means keeping the salon.

Both Viking 42s were designed from the start for Zeus power: Pods are more fuel-efficient than straight inboards and faster with the same size engines. Their maneuverability with computer-linked joystick controls is well-known. Zeus includes the Skyhook feature, which uses interfacing between the pod controller and GPS to hold the boat in position through steering and engine inputs automatically, a handy feature if you need to leave the helm for a short period, for instance to rig dock lines or fenders in crowded waters, or while waiting for a bridge opening or a spot at the fuel dock when a strong current is running. 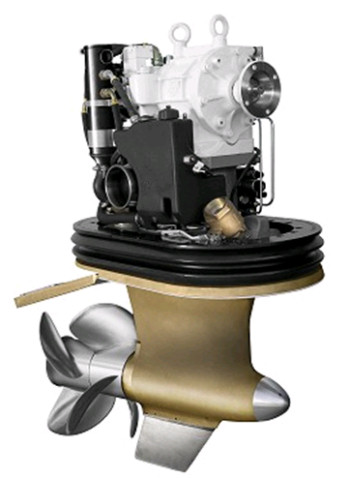 Whether maneuvering to battle a billfish or docking in a crowded marina, the Zeus pod makes almost any skipper look like a pro. Linked to Cummins MerCruiser diesels, pods should make the Viking 42 Open as nimble as a ballerina. Viking chose Zeus drives because they can be mated to a variety of engine brands.

Originally, both the 42 Open and Convertible were planned for Cummins MerCruiser QSB5.9-440 diesels as standard, with QSB5.9-480s as options. However Viking now plans also to offer the QSC8.3-600s as options in both models. The first Convertible was built with 480s, cruises around 28 knots, tops out around 32 the company says. The design weight of the Open is 3,300 lbs (1,497 kg) lighter than the Convertible, so she should be a little faster. The first 42 Open, which at press time was being trucked to Florida for tower installation, sea trials and photography prior to her unveiling in February, has twin QSC8.3-600s under the cockpit.

If you've been waiting to get into a first-class express sportfisherman in this size range, keep your checkbook in your pocket a couple of months more and wait for the Viking 42 Open. It looks to us like she'll have all the quality Viking is famous for, but at a price that makes her affordable to more people -- and Zeus drives, to boot. Figure on spending around $1 million.
How can we recommend a boat that hasn't even been launched yet? Because it's a Viking – simple as that.