The Windy 25 Mirage is a capable cuddy-cabin cruiser from the land of the Vikings, a 7.68 m (25' 2") LOA pocket rocket that's popular among quality-conscious boatmen from the North Cape to Southeast Asia. Despite her small size, the 25 Mirage meets CE Category B standards for offshore service, more toughness than most folks need in a 25-footer. Her cockpit has plenty of seating on a U-shaped lounge; drop the table and it turns into a sun pad for catching rays under the midnight sun. Folks willing to rough it a bit can cruise overnight or for a weekend, either sleeping under the stars (a canvas top is standard) or on V-berths below, where there's a head but not much else in the way of creature comforts. Nevertheless, folks with the Viking spirit might find the Windy 25 Mirage is all they need for coastwise adventures. 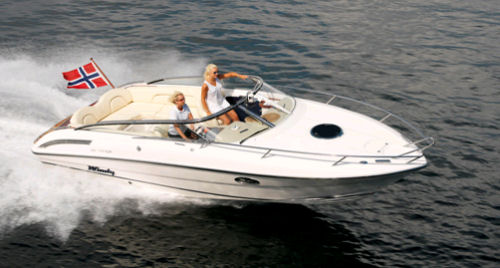 The Mirage makes no pretense towards being anything other than a luxury runabout: There's no fishing gear, for example, and her fit and finish is definitely in the yachty class. (Although there is a cooler.) Access to the foredeck is via the walk-though windshield; stainless rails help keep crew onboard. An electric windlass with anchor and 33 m (108') of chain is optional.

Why is a Powerboat Called "Windy"?

Hugo Vold started Windy Boats in 1966 in Skarpnes, a town in southern Norway with a long history of seafaring and boatbuilding. Vold's father was a fisherman, working the often treacherous waters of the nearby Skagerrak Channel. Even in the worst weather, the elder Vold's rugged boats always brought him home; all of them were called "Vindy." When he started his boatbuilding company, Hugo Vold named it in honor of his father and his father's seaworthy boats. Today Windy Boats is a wholly owned subsidiary of Periscopus AS, an Oslo holding company with broad interests across a wide range of industries. 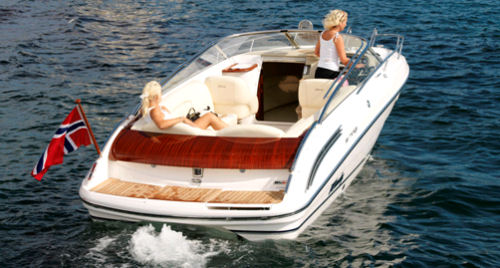 The swim platform has a stainless steel ladder stowed under cover; all the Windy's hardware is stainless, as is the windshield frame. The platform's teak deck is optional. A cockpit canopy is standard, but we aren't crazy about the varnished mahogany canopy hatch – people have to climb over it to reach the platform. It'll be scratched in no time. There's a shower on the platform, but no hot water.

Today, Windy Boats still relies on traditional Norwegian boatbuilding skills, but the old ways are supported by modern technology. The company is housed in a modern facility where 160 employees build Windys from 25 (the Mirage is the smallest) to 58 feet (7.68 to 17.75 m). The design department relies on modern computer programs to create new boats. However, skilled craftsmen and –women still attend to the details, using fine woods (mahogany in the Mirage), stainless steel fittings and high-quality fabrics above decks and below. The result is a line of very nice boats combining excellent construction and yachtlike appointments. 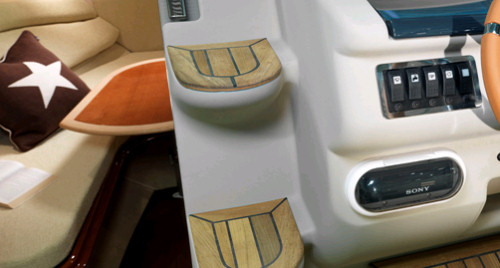 Molded steps lead from the cockpit to the foredeck, via a walk-through windshield. There are no side decks to speak of, so this is the only route forward. Handrails built into the windshield frame provide added security when making the climb.

The 25 Mirage is powered by a single sterndrive, but Windy offers both gas (benzine) and diesel options by Volvo Penta. The company doesn't publish an official list of engines – at least, we couldn't find one -- but in an email Windy Boats' president/CEO Knut Heiberg-Andersen said Mirages have been delivered with Volvo Penta 5.0 GXiE, 5.7 GXiE and 8.1 GXiE gas engines, and D3-220 and D4-300 diesels "to mention a few." All engines spin Duoprop drives. 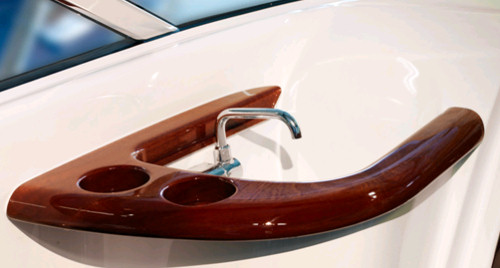 Windy craftspeople finish the 25 Mirage with beautiful details, like this varnished mahogany trim/drink holder around the cockpit sink. Varnish isn't too hard to maintain if you keep after it from the beginning, lay on a fresh coat every couple of months and keep the sun off it. 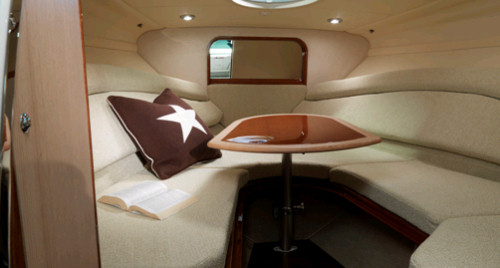 Belowdecks, the 25 Mirage's accommodations are about what we'd expect in layout – what else can you do? – but nicely designed, styled and constructed. The table converts the lounge to a berth, and there's a head under cover at the end of the lounge. The cabin sole is cherry with darker wood accents.

According to Mr. Heiberg-Andersen, a Windy 25 Mirage will cost between $130,000 and $160,000, plus taxes, depending on engines and options. There are plenty of Windy dealers all over Europe, the Middle East and even in Thailand. At press time a Swiss dealer had a 2011 Mirage listed for 189,440 Swiss francs (€144,800, approx.), powered with a 320-hp Volvo Penta 5.7 GiE gas engine.
You'll have a hard time buying a Windy 25 Mirage in the U.S.; we found only one dealer, in Connecticut. Nevertheless, we think buyers looking for a classy 25-footer in other parts of the world should check out this boat before buying anything else. She's not everyone's idea of a cruiser, but for dayboating and the occasional overnight, she should be a good choice.