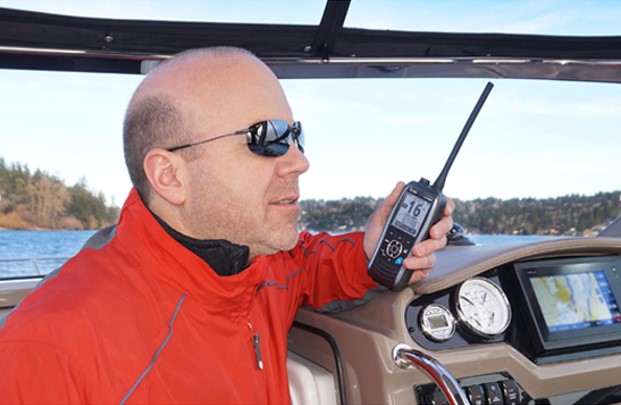 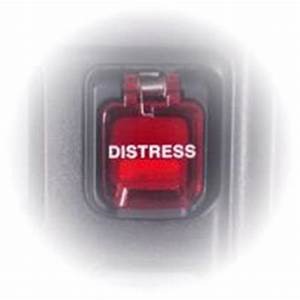 The Icom M93D has built-in GPS and DSC features so a single button can signal distress and provide position to rescue crews.

Next to lifejackets, VHF radios may be the most important and useful safety devices carried on board any vessel. The Icom M93D VHF handheld is portable enough to be carried on the smallest dinghy.

DSC and How It Works 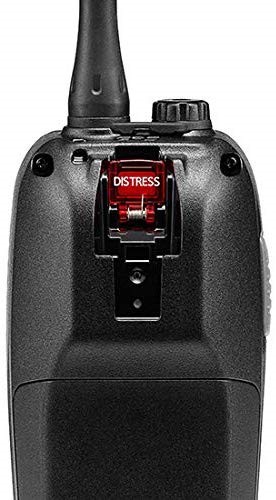 The Icom M93D has a dedicated independent receiver for monitoring distress calls on channel 70 as well as the ability to send a distress call with position and personal particulars at the touch of a button.

The U.S. Coast Guard offers a VHF-based safety service to mariners as part of the Global Maritime Distress and Safety System (GMDSS), which  was created because of the international Safety of Lives at Sea (SOLAS) treaty. This service, called Digital Selective Calling (DSC), allows mariners to instantly send a formatted distress alert to the Coast Guard or other rescue authority anywhere in the world.

One important aspect of DSC is registration, so rescuers can identify who is calling for help. On ships, the ship itself is registered, but with Icom's M93D radio and other recreational craft, the individual registers, so the handheld radio can be taken anywhere and be identified. 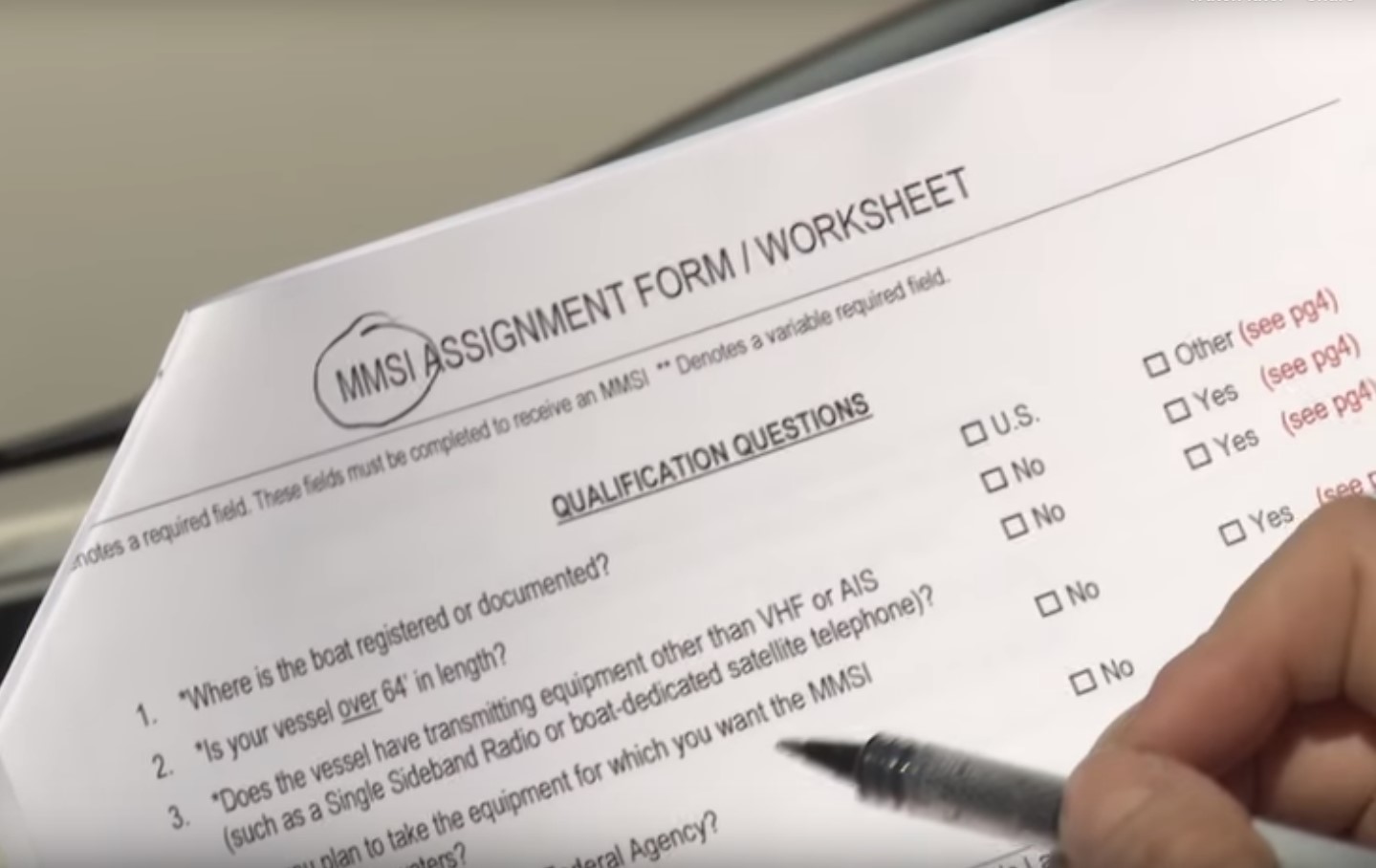 A comprehensive registration form allows the Coast Guard to identify the caller in an emergency and with an integrated GPS helps them identify who, what, and where the emergency is.

Maritime Mobile Service Identity (MMSI) is a unique nine digit number that is assigned to a (Digital Selective Calling) DSC radio or an AIS unit. Similar to a cell phone number, your MMSI number is your unique calling number for DSC radios. The information provided when obtaining a MMSI number is transferred into the U.S. Coast Guard's national distress database for use in emergency situations.

BoatUS has been authorized by both the Federal Communications Commission (FCC) and the U.S. Coast Guard to assign MMSI numbers only to vessels that meet the following criteria:

MMSI numbers are free for BoatUS Members or $25 for non-members.

Once an MSSI number is acquired, entering it into your Icom handheld DSC radio will ensure all pertinent info is transmitted at the touch of a button. 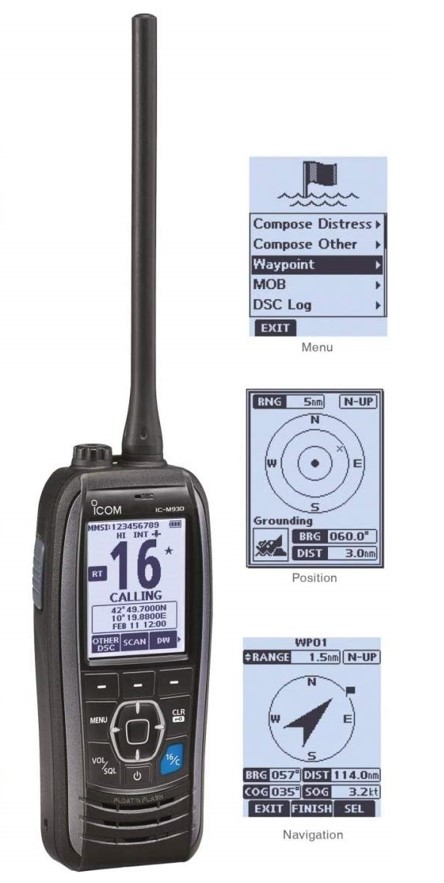 The GPS features of the M93D include entering up to 50 waypoints with alpha numeric names. The top line of the LCD shows the preset MSSI and the charge level (upper right) of the radio.

The Icom M93D VHF handheld comes in a polycarbonate housing with a die cast aluminum chassis and has a liquid crystal display (LCD) in greyscale. It fits nicely in the palm of your hand and weighs only 9.3 oz. The unit is IPX7 Rated, meaning it is waterproof for 30 minutes at 1 meter deep. Since it floats, this may never be a problem.

Icom radios are built to MIL standards, which makes them slightly more expensive than the competition but ensures quality. 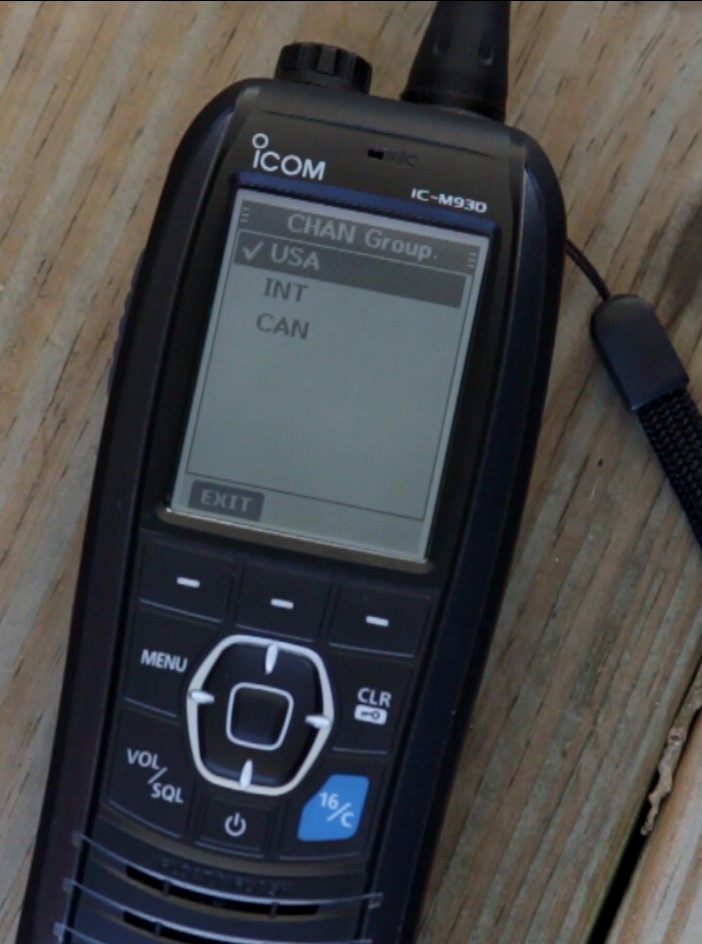 The settings menu allows the user to set the default channel group settings for location of use.

This radio supports USA, Canadian and International group channels that can be switched with a simple menu selection. Plan to use this radio with a preset MMSI number, otherwise the unit will prompt for an MSSI to be entered every time it’s turned on. Just hit “clear” twice if you don’t have the number and the DSC features are disabled.

There is some initial setup to be done with the Icom M93D, such as charging the battery, inputting the MSSI number, and setting up defaults such as which channels to monitor, but the intuitive menu interface makes quick work of these even though there are dozens of settings to choose from, and once accomplished makes the daily use of the radio simple and easy to navigate. 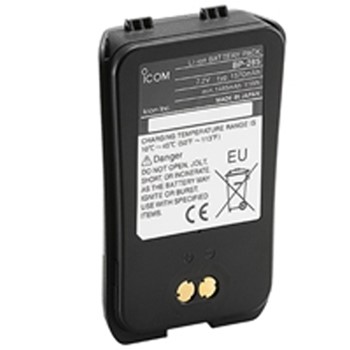 A second 1570 milli-amp-hour battery is handy for swapping in and receiving nearly continuous service. The charging cradle has room for both the radio and a spare battery to charge simultaneously.

The handheld will last nine hours on one charge and it has a three hour rapid-charge feature. The M93D comes with a charge cradle, an AC power plug-in, and a cigarette lighter 12V DC charger – any of which can be used to charge the handheld. The radio does have features such as the backlight on the LCD that can be turned off to save power and extend battery life.

The M93D is light enough that it can be clipped to boardshorts or a lifejacket without being constantly reminded it's there. An optional mike can be attached for boaters who prefer to clip the radio to a belt and set the mike near their collar.

The menu system is fairly intuitive and won't require getting out the manual to change something like the background lighting in the LCD. Simply use the keypad to scroll through to find the function or menu setting needed.

The dual/tri-watch feature allows monitoring two or three channels at once. So monitoring a favorite channel as well as listening for hails and emergency traffic on channel 16 simultaneously is never a problem. When a call is received, the channel transmitting is displayed on the LCD. 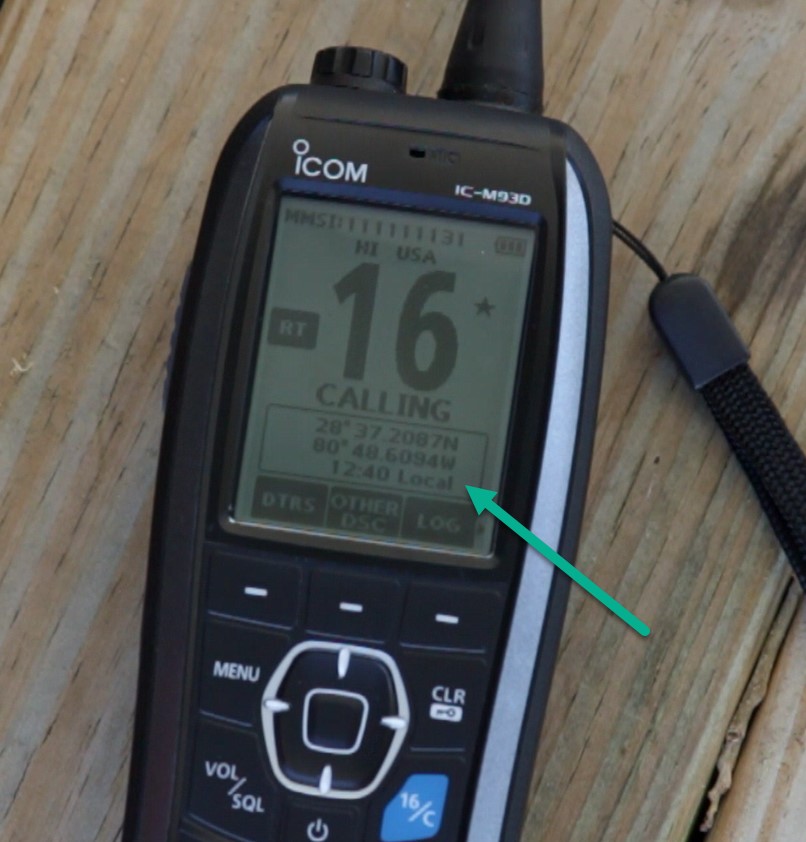 The radio knows the time from the GPS. The UTC setting allows it to correct from GMT to local time. The time is displayed in hours and minutes.

Icom, if you're listening, we wish the time displayed under the lat/long showed seconds as well. For sailing races where you need to record your own finish time, it's nice to know the GPS time with seconds resolution.

Along these lines, the unit shows speed in knots, it would be nice to have a menu item that would allow conversion to mph – something we use all the time in our tests. 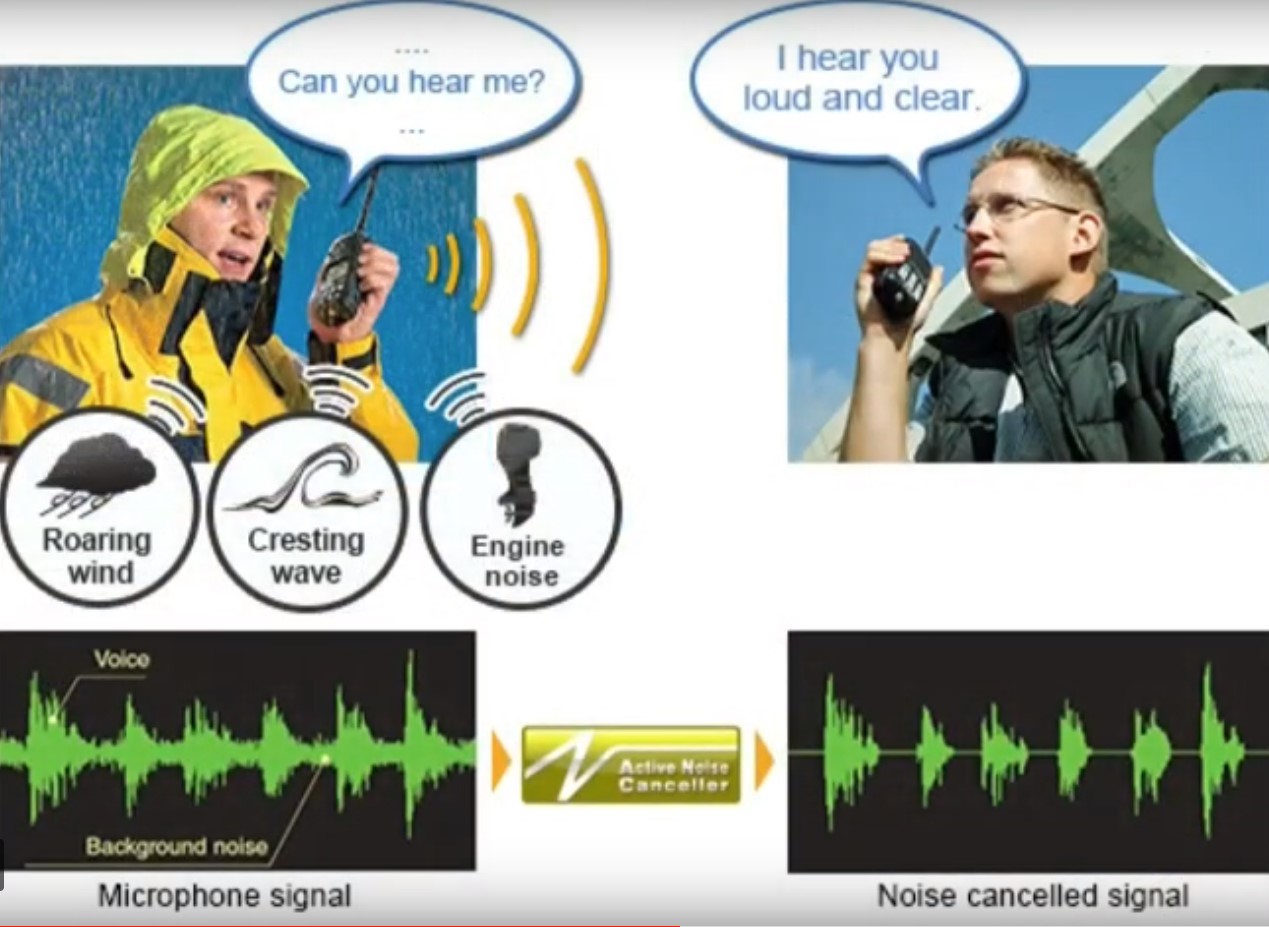 The Active Noise Cancelling feature recognizes voice characteristics and effectively eliminates wind and engine noises. Noise cancelling can be turned off for mike or speaker.

The embedded GPS technology can mean one less device needed aboard.

Which brings up the subject of why boaters should carry a VHF over a cell phone? Well, the VHF can function offshore out of the range of cell towers, and broadcast to anyone, and in any weather - and there are no service charges or subscriptions. It’s waterproof, floats, and has MOB, DSC and GPS features that prove phones very limited when it comes to boating safety. And don’t forget the DSC feature works anywhere in the world – 911 doesn’t.

Digital Selective Calling (DSC) is activated by pressing and holding the distress button on the back of the radio for three seconds. Position will be automatically transmitted along with details from the MMSI registration. The menu and softkeys can be used to add the specific nature of the distress. 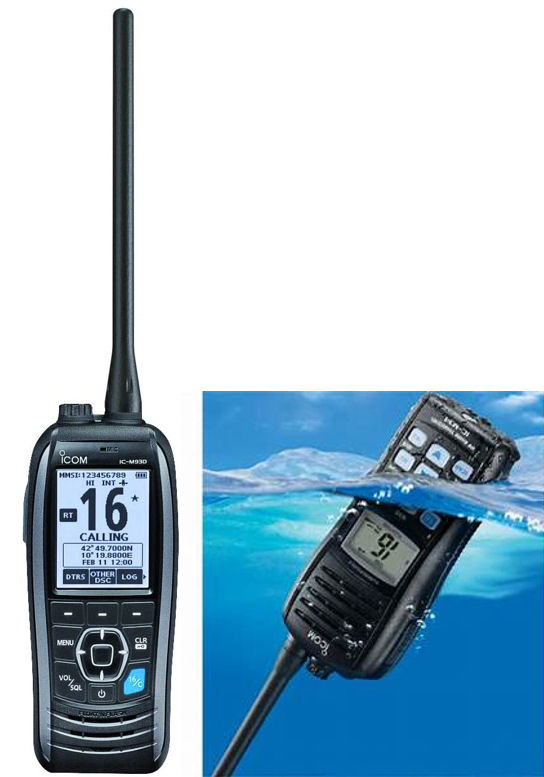 Icom handheld units, although waterproof, should be rinsed in freshwater after a saltwater soaking, and then dried to keep the buttons operating smoothly. The small microphone above the LCD has an Aqua Quake feature that vibrates to clear the mike of water.

The Man-Over-Board (MOB) feature can be activated by selecting MOB from the softkey menu with either a GPS position or a manual position input (when no active GPS signal is available). Navigation back to a MOB position can also be selected by hitting menu after MOB is inputted. 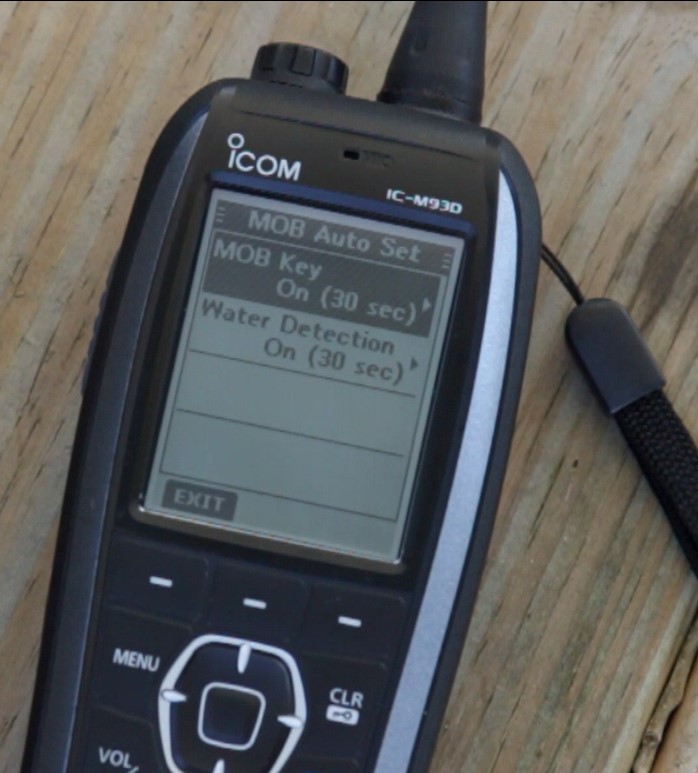 The settings menu (water detection) also allows us to create a MOB with a subsequent distress call if the unit gets wet as if we were wearing the unit and fell overboard.

Be careful with VHF handhelds not to accidentally lean on the transmit button and create an "open mike" situation. 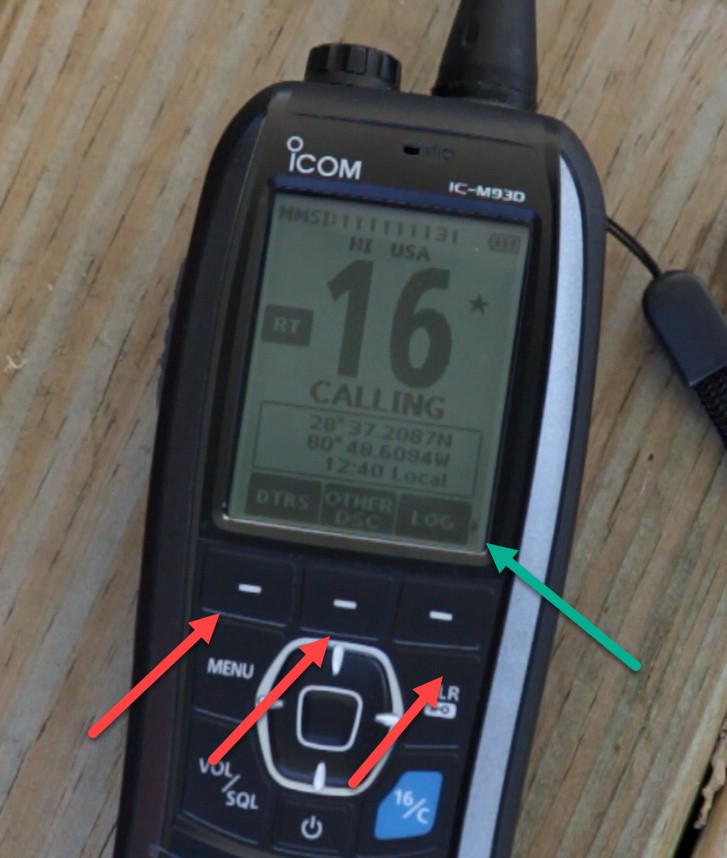 The green arrow displays softkey functions. Scroll through all of the functions by using the left and right buttons on the keypad. Touching the – sign (red arrows) under the softkey displayed, will give a submenu for that function; exit any function by hitting the menu button (esc).

The soft keys provide selection of the 19 top functions and these can be prioritized with presets for tagging favorites such as channels and weather alerts. The lock feature keeps the keys inoperable if accidentally pressed. 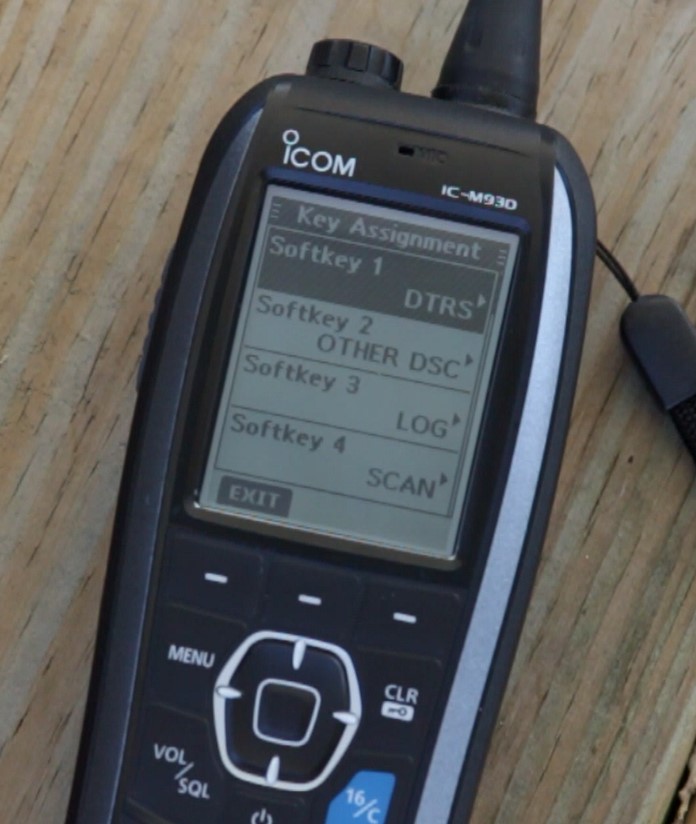 The softkeys can be prioritized so a frequently used softkey can be moved up in the pecking order so it’s not necessary to go through the entire list to get to the most frequently used. 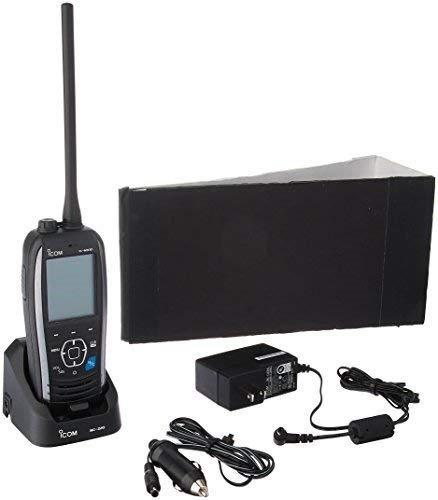 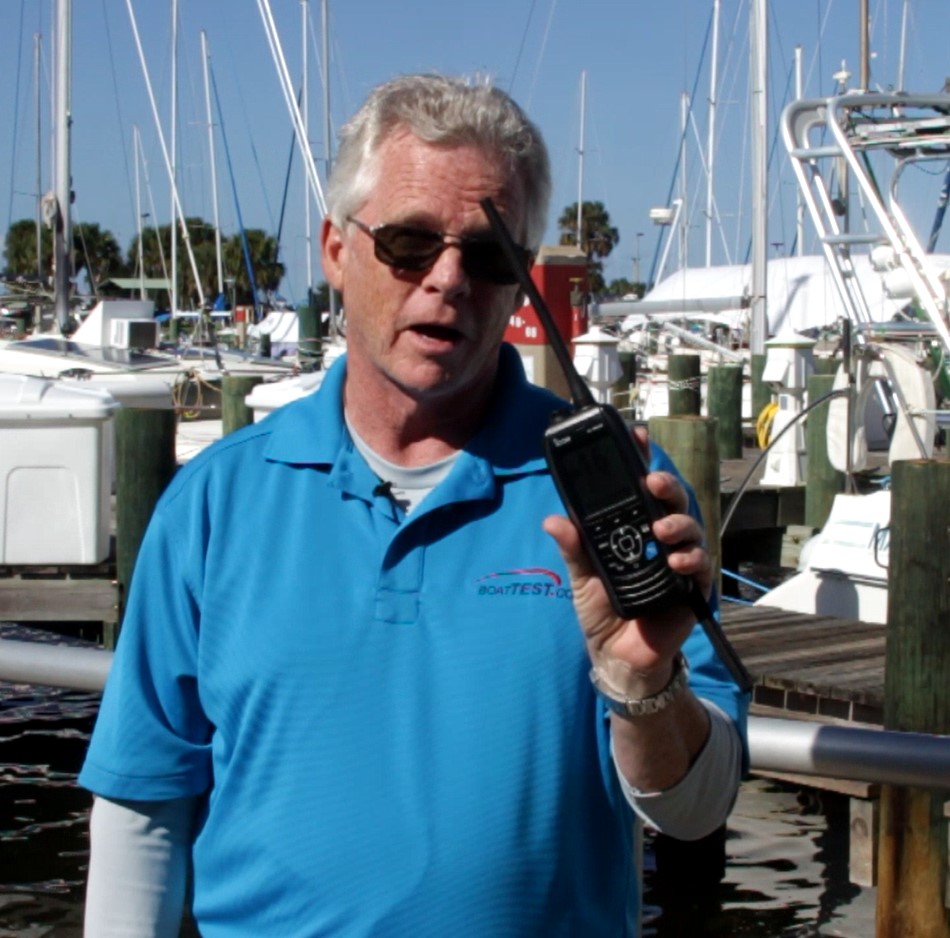 The BoatTEST video of Captain Steve inspecting the features of the Icom M93D will be coming soon. The radio is so intuitive to use he scarcely looked at the manual and then only to understand the features.

The importance and distinguishing feature of the Icom M93D radio is that it combines three important factors - communication, navigation, and safety - in a single piece of equipment and it is so intuitive to use we barely glanced at the manual before becoming proficient with it.

We believe that a VHF is essential to safety and with all these features packed into a slim handheld, Icom encourages all boaters, regardless of the size of their vessel, to be safe by carrying and relying on the M93D.