To get a special BoatTEST.com discount on the QuietKat bike, click here. 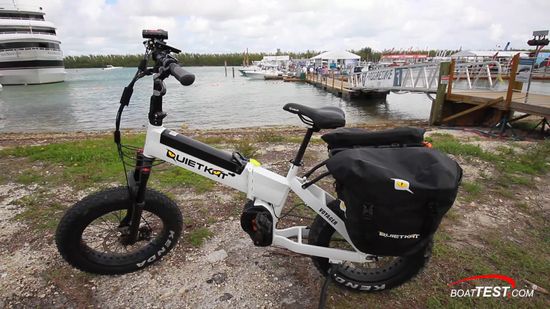 This bike was made more than just for boaters. It is great for hunting, hiking, exploring and so much more!

For people who enjoy cruising, a bicycle is a natural addition to the list of supplies to have on board. How many times have we seen a yacht arrive at the marina and the owners step off and unfold their bicycles? QuietKat offers an extension of that experience with a collapsible bike that is also electrically powered. Let’s take a look at the features.

We’ll start our features inspection with the right side of the handlebars. It starts with contoured grips that feel comfortable to hold. Just inside the right-hand grip is the shifter for the bicycle’s (we’ll get into another shifter for the electric engine shortly) three speeds and a gear indicator is right in front. Extend the fingers to activate the mechanical rear disc brake. This unit has the optional LED light mounted to the right side of the handlebar. Just to the left is the color display that not only provides the bike’s speed and trip information but the battery condition as well. 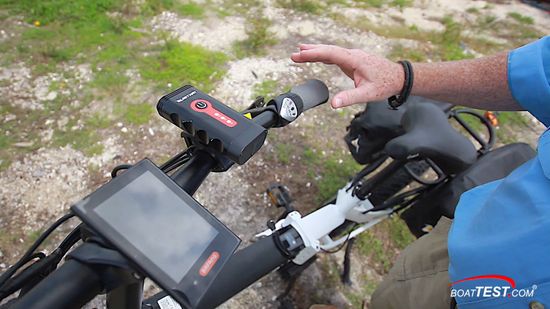 We can see that the bike has all the necessary preferences for riding. Just on the right side, we can see that it has so much to offer.

Moving further to the left, there’s a control for the color display. It activates the power, serves as a selector for the various display functions, and lets the user shift between the electric motor’s two speeds. This shifter consists of a simple one and two buttons on the left handlebar. One, of course, is the low speed and it would be used for getting up hills or rough terrain. Two is for more level terrain and higher speeds. This is not to be confused with the other shifter that works the hub gearing. Just like on an old three-speed, no derailleur. Next is the throttle trigger, the disc brake for the front wheel, and what would a bike be without the trusty bell? 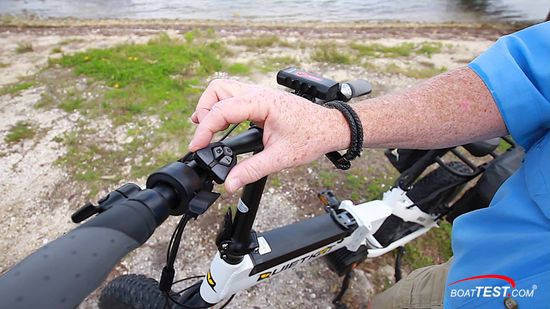 The left handlebar includes the throttle trigger that is used to propel the bike at speeds up to 20 mph.

Just above is the battery. It’s an 11-amp hour, Panasonic lithium-ion battery. Just a turn of the key and a lift of the handle has it removable for charging or swapping out with another to extend the range. It also includes a charge level gauge. 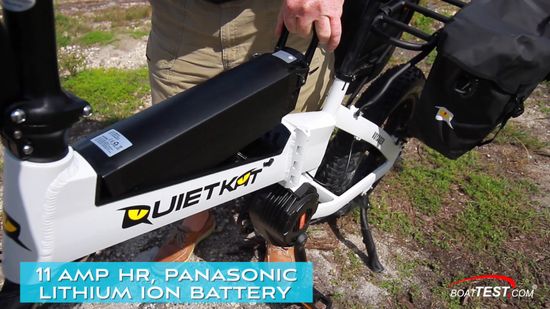 We can see how easy it is to handle the battery. This makes it easy to take it inside for a recharge or swap it out with a fully charged unit.

The battery weighs in at 8 lbs. (3.63 kg) and fits easily into the optional saddlebags which are supported by a center rack. Down below is the rear brake disc which is also drilled, the brake caliper, the geared hub controlling the shifting for the wheel, not the motor, and a belt drive instead of a chain. This makes it much cleaner and easier to maintain. The contoured saddle includes a quick release for the post to allow for quick adjustments on the fly. 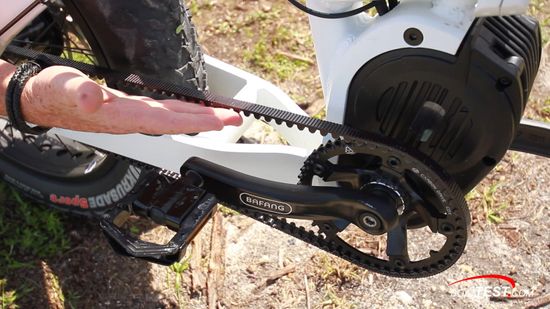 Belt drives are easier to work with than a chain since there is no worry about it coming loose from the gear or getting too dirty.

To collapse the QuietKat, first the pedals flip in. Then there’s a quick release for the frame and another for the handlebars to drop down. Once completely broken down, the bike fits into a storage compartment on the boat or in a supplied wheeled case. 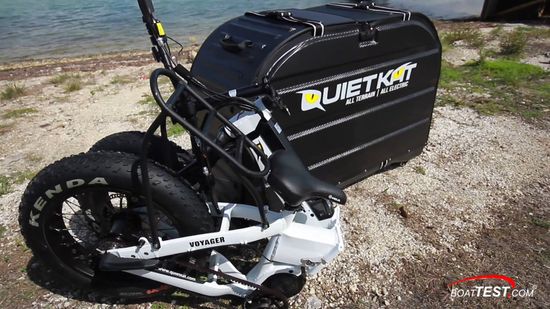 Notice how the bike gets progressively smaller when folded up. It conveniently fits into its wheeled case, which allows for easy storage.

Riding it is just as easy as riding a standard bicycle. Use the pedals or give a slight push to start rolling it, press the thumb trigger and off it goes. The throttle trigger is spring-loaded and progressive. So the more you squeeze, the faster it goes. To slow down, simply ease up on the throttle trigger. There is little to no effort needed when riding it. Its top speed is 20 MPH. The knobby wheels give a good grip on all types of terrain, so ride it like a mountain bike. 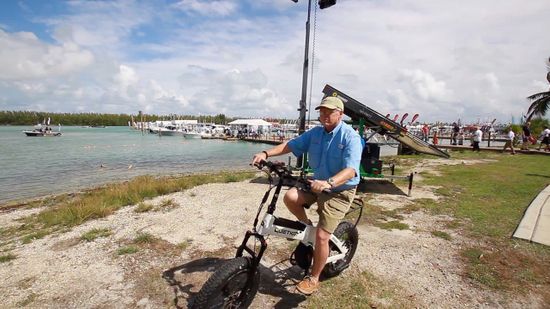 The left thumb trigger is used to accelerate the QuiteKat Bike. Two gears allow it to operate in fast or slow speeds.

When using the QuietKat for hunting, it makes bringing your gear to the hunting site a lot easier than carrying all your gear on your back. Being Quiet, it has obvious advantages. It’s also advantageous where there are long distances between hunting locations. We strongly recommend taking advantage of the cargo trailer to allow even more gear to be carried in or out. 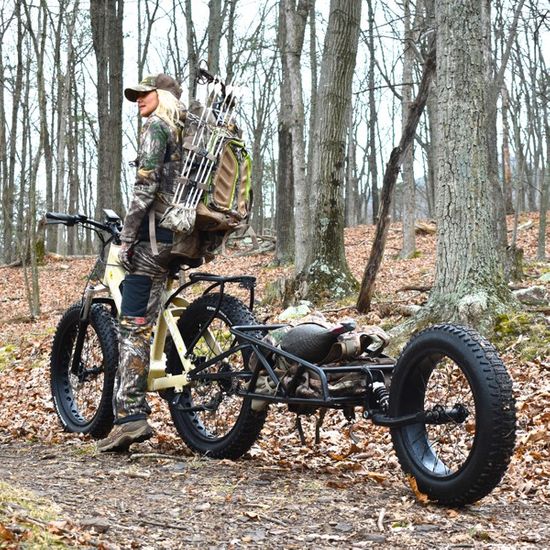 The cargo trailer is a nice accessory to have on the QuietKat, particularly when there is a lot of gear to be carried.

The QuietKat makes for a nice addition to any cruising boat, but it is so much more than that. It’s easy to transport, easy to store, and easy to ride. As with any high-end bike, it is good to make sure that it is protected at all times with a sturdy bike lock. We would also remove the battery when it's not in use. It is always fun to explore a new region upon arrival and by having the QuietKat in your cruising plans, your area of exploration just grew exponentially.

For more information on the QuietKat bike and to get a special BoatTEST.com discount, click here.