The blind autopilot strikes again. On July 30 a fishing trawler managed to T-bone a huge cruise ship 41 miles off Nantucket. While it happened in the dead of night, the cruise ship was lit up like, well… a cruise ship. How did such a thing happen? Simple: it was business as usual on the short-handed fishing trawler. The crew broke USCG Navigation Rule 5 (33CFR/83.05), which states: “Every vessel shall at all times maintain a proper look-out by sight and hearing as well as by all available means appropriate in the prevailing circumstances and conditions so as to make a full appraisal of the situation and of the risk of collision.”

The good news is that the blind, 92’ (28 m) steel-hulled Gabby G did not T-bone a sailboat or motoryacht, which could have been catastrophic. It happens. Our guess is that the USCG will do what it usually does in such cases of blatant Rule 5 violation by commercial fishing vessels — which is, sadly, to do nothing

The Norwegian cruise ship Norwegian Pearl was hit by the 92-foot Gabby G fishing vessel at 2:25 a.m. ET Saturday, July 30, 2022, 41 nautical miles off the coast of Nantucket, Massachusetts. The USCG was immediately notified of the collision by the cruise ship personnel.

A spokesperson for Gabby G told a news outlet that one person suffered a laceration to the face but is expected to be OK. The Gabby G was damaged at the bow and was towed to New Bedford, where it arrived around 5:30 p.m. ET and was safely docked

No injuries were reported on the cruise ship, officials said. News outlets reported that some of the passengers were awakened by the collision. One passenger interviewed said they felt the jolt of a collision, and then the cruise ship stopped for about one hour. 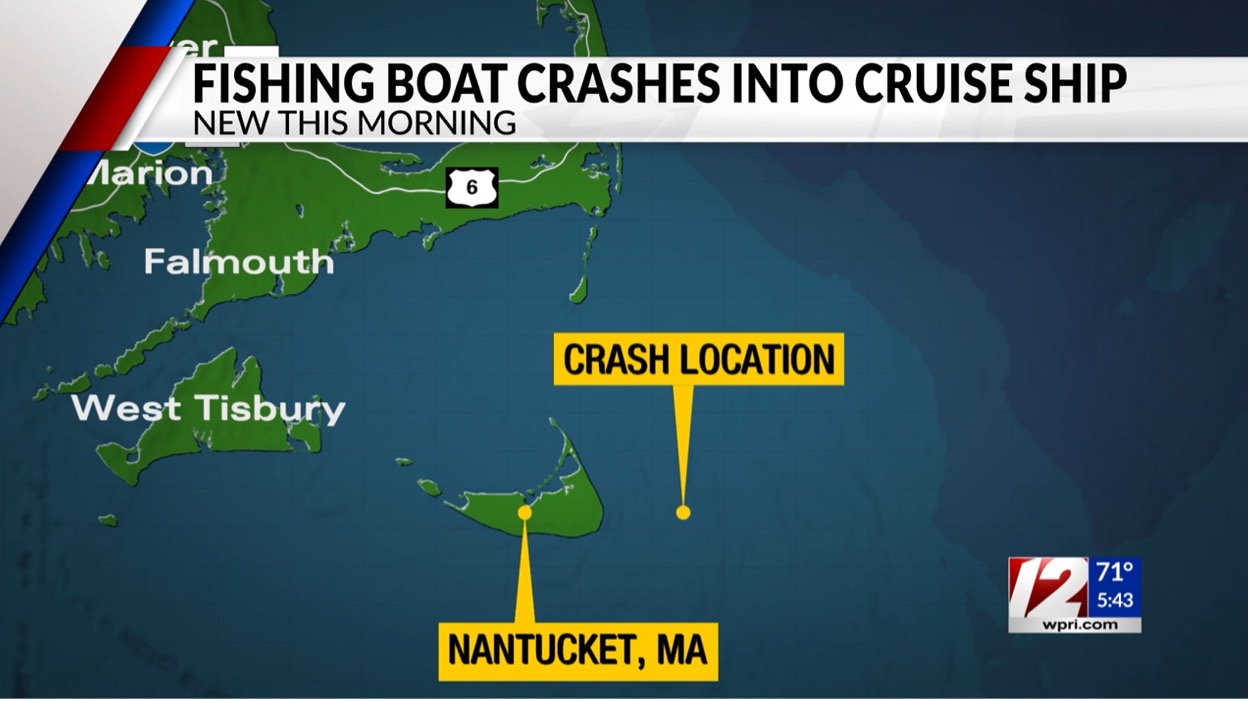 “The seas were relatively calm and then all of a sudden the ship just started going to the side,” said a passenger.  Evidently, over the ship’s PA system the code “Delta D” was repeatedly announced. This was a message to the crew, but the passengers received no explanation of the incident, according to one person aboard.

Norwegian Cruise Line said, “On July 30, 2022, a small unidentified fishing vessel made contact with Norwegian Pearl while she was sailing to Bermuda. Norwegian Pearl was thoroughly assessed and given clearance by the United States Coast Guard to continue her seven-day voyage as planned. The fishing vessel reported some damages to the bow and was instructed to proceed to its U.S. base.”