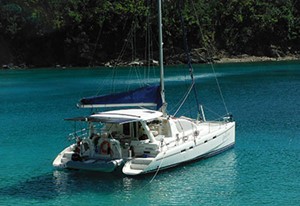 For anyone cruising on a boat that will be away from the dock for any appreciable time keeping the batteries charged becomes an important consideration. The silent and on-going cost-free nature of solar power make it an obvious candidate.

Electrical energy from the sun is not new, being first being discovered back in 1839 when, French physicist, Edmund Becquerel found that certain materials would produce an electric current when exposed to light. The science behind this behavior was laid out by Albert Einstein in 1905 when he published his paper on the photovoltaic effect winning him the Nobel prize in physics in 1921. In 1941, Russel Ohl at Bell Labs invented the now common silicon solar cell.

Solar panels can be used anything for trickle charging batteries to supplying live-a-board cruisers with their daily power.

Solar cells are silicon based semi-conductors and produce a voltage of about 0.6V per cell, regardless of size and somewhat independent of light level. However, the current you can draw from a solar cell is dependent on cell size (the bigger the cell area the more the current) and light intensity (the brighter the light the greater the current as more electrons are given up by the silicon). Solar panels then internally “stack” a number of solar cells in series to get typical panel voltages of 18-40V. Most panels have blocking diodes to prevent reverse current flow at night that would otherwise turn the solar panel into a heater.

Panels are rated in Watts, Voc, open circuit voltage (nothing connected to the panel), Isc, short circuit current (maximum current that would flow if the panel outputs are connected together), and voltage (Vmp) and current (Imp) at the maximum power point. These values are specified at a Standard Test Condition (STC) of temperature and irradiance.

For any given solar panel, real-life output is dependent on three conditions: light intensity, angle and temperature.

Angle: The maximum power will be obtained when light strikes the panel at 90 degrees. As the incident light moves away from perpendicular, the power reduces by the cosine of the angle. To harvest maximum output from your panels you need a mechanism to change the angle of the panel (and the presence of mind to keep changing the angle throughout the day). A boat that’s sailing around its anchor can be a challenge from this perspective and many installations just fix the panels in a horizontal plane. Due to the sun’s angle changing as the day progresses, near-rated panel output is only obtained for a short period around noon falling off either side (pre or post-noon) resulting in a bell curve of actual power production. As a rule of thumb, taking the rated output of the panel and multiplying by 3 will give you an idea of the number of watt-hours that can be obtained on a daily basis from a panel. Dividing that by the battery voltage (normally 12) will give you the number of amp-hours harvested daily. For example, a 300W panel will typically provide 900WH or 75AH. This rule of thumb value will change slightly depending on your latitude (greater the closer you are to the equator) and time of year (greater in the summer in the northern hemisphere). You can find tables online giving values for numerous cities.

Temperature: Silicon panel output is temperature dependent losing about 0.5%/C as they heat up. For this reason, when you look at any solar panel specification, you will find the Standard Test Condition (STC) values specified at a temperature of 25C. When mounting panels on your vessel, to minimize the effects of temperature buildup and the resultant loss of output, leave an air gap under the panels if you can. 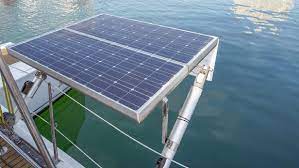 Panels are made of…?

There are three principal types of solar panels: monocrystalline, polycystalline, and amorphous.

Monocrystalline panels are cut from a single silicon ingot and typically mounted in rigid frame that will not tolerate any flexing. Most panels have a solid backplate but some more recent panels have glass on both sides so they can harvest bounce light hitting the panel from below as well as above. Normally the highest efficiency of different panel types maxing out at 22%, with a typical range of 16-18%.

Polycrystalline panels use cells with smaller multiple crystals tending to give them a flecked appearance. They are slightly less efficient than monocrystalline cells, especially in low light levels. However, they are easier and less expensive to manufacture and some are made into flexible panels.

Amorphous cells are manufactured by depositing silicon vapor on a substrate. The cheapest to produce, they are the least efficient, but can easily be formed into flexible panels. As their efficiency is in the range of half of that of monocrystalline, double the surface area will be required for the same output power.

Solar panel efficiencies are continually improving over time. We have just over 1000W on our catamaran which supplies our daily needs with a fridge, freezer, lights, radios, CPAP machine, and charging mobile devices. When we started out in 2012 the biggest panels I could get were 250W. Now in the same size footprint I can get 300W panels.

Wire sizing: To not waste valuable solar energy in the wiring, British science writer, Nigel Calder, recommends multiplying the Isc rating of your panels by 1.25 before using the 3% loss tables for wire sizing.

Shading: if possible, when using multiple panels, wire them in parallel to minimize shading issues. Soft edge shadows (e.g. rigging at a distance) are less problematic than hard edge shading. Shadowing all of a single cell in a panel will drastically reduce that panel’s output.

Controller: leaving a solar panel directly connected to a battery when the boat is not in use can slowly overcharge a battery. If the panel output at 14V is more than 0.5% of the battery amp-hour rating, a controller is needed. (Always use a controller with Lithium Ion batteries due to their sensitivity to damage from overcharging).

When hooking a solar panel up to the batteries, the panels' output voltage is constrained to be that of the battery. However, looking at the graph above, the current from the panel will still be the same as that at the Max Power point. This means you are not getting the rated panel output. For example, an 80W panel at max power has a voltage output of about 17.8V and a current of 4.5A. If the panel voltage is the same as the battery (call it 13.4 V), the current will still be 4.5 A resulting in only getting 60W out of that 80W panel.

Using A Maximum Point Power Tracking (MPPT) controller you can get most of that wasted power back.

The MPPT controller operates the solar panel at the voltage to extract maximum power from the panel. It then uses an internal DC-DC converter to drop the voltage to that required by the battery. That 17.8V and 4.5A coming from the panel in the above example then become 13.4V at almost 6 A going to the battery. You get to use the full panel output minus a few % loss in the controller.