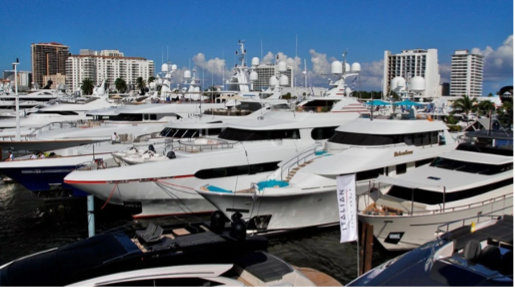 Following yesterday’s news on the inflation rate and the fact that many major financial institutions are now predicting a recession, it is natural for buyers to ponder the best time to purchase a boat. Should it be now before boat prices go even higher or is it better to wait for softness in the market and get a better deal? BoatTEST answers these questions and makes a long-term forecast about boat pricing.

A perfect storm is quickly developing that will impact new boat pricing over the short and long term, in our opinion. The elements of this perfect storm are:

The Past is Prolog – Oil Prices

Typically, a rise in the price of oil has a domino effect on the rest of the economy. Since the U.S. largely runs on oil, when its prices go up, most other things follow.

A consequence of the oil price shock in the early 1970s gave rise to the popularity of production trawlers, most built-in Taiwan or Hong Kong and production sailboats largely built in the U.S.

The average prices of almost every type of boat have steadily gone up every year in the last 22 years, except for one – 2009 – according to the National Marine Manufacturers Association.  A glance at the chart above will show what was happening to oil prices during that period.

Since 40% to 50% of a fiberglass boat is petroleum-based polyester or vinylester resin, it is little wonder boat prices went up. The prices of fiberglass and other materials also went up accordingly. All of this was without a major disruption in the oil supply in the last 22 years. While oil prices have dipped during the last 20 years, they have always bounced back.

Wars, no matter who starts them, usually end up with spiking oil prices at least for a short period of time that is enough to have a ripple effect through the economy. Unlike the Vietnam, Iraq, and Afghanistan wars, Ukraine and Russia are major exporters of foodstuffs: wheat, corn and vegetable oils. Ukraine's exports have stopped because of the war and Russia’s products are under sanction. Likewise, Sanctions on Russian metal ores will inevitably result in boosting the prices of finished metal products.

Poland’s Boat Builders. Poland is the largest maker of boats in Europe, including many brands imported into the U.S. such as Galeon, Axopar, Nimbus, Sunreef and Windy, among others. Up to a third of their employees are Ukrainian, most of whom have left for home. Getting labor in Poland, we are told, is just as hard as in the U.S., and we can expect wages there to go up, particularly because inflation is picking up in Europe.

Increased wages extend to the truck drivers transporting boats to seaports in Europe and across the U.S. because there is a shortage of drivers on both sides of the Atlantic. In the U.S., some truck drivers are being paid as much as commercial-airline pilots. The chart below shows U.S. wages on an increase this year. 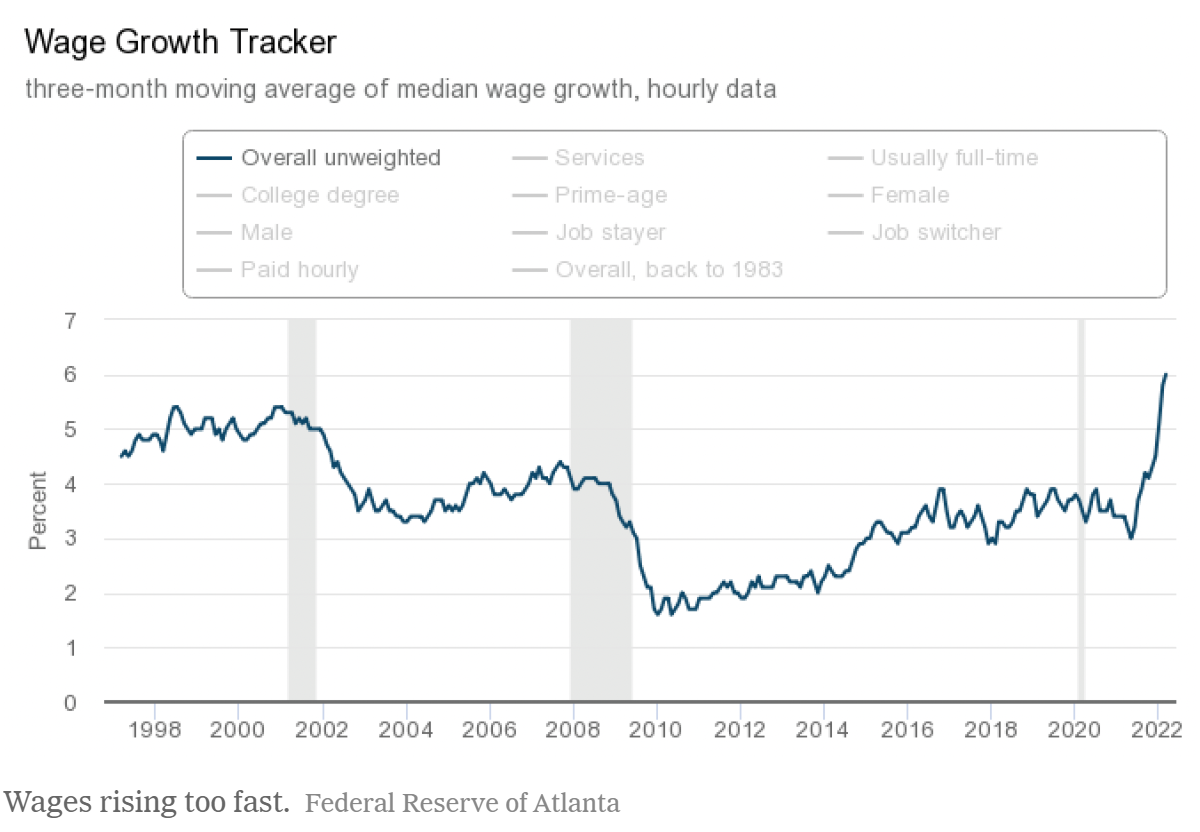 While the supply-chain problems have eased somewhat, chips are still in short supply, as are many other products made in China. Cargo ships are still stacked up on the West Coast, but not as bad as before. COVID-19 has hit Shanghai and lockdowns in China are feared to cause scarcity of some goods. Once the lockdown is over, the flood gates of supply will be open once again creating new slowdowns in transportation.

Those of us old enough to remember the 1970s and early ‘80s can recall the government’s efforts to control inflation by curbing oil consumption: first with price and wage controls, then, lowering the highway speed limit to 55 mph, and still later the president urging Americans in the wintertime to turn down the heat and to wear sweaters.

It has been 40 years since inflation has been a major concern to the American public and the younger generation has little idea of how debilitation it can be to the average person’s sense of well-being. The value of savings rapidly shrinks and salaries must be constantly renegotiated to stay even.

Fed Funds rates typically go up during inflation. This is an effort to tighten the money supply by making it more expensive to service loans. The two highest spikes in the last 60 years occurred as inflation took off due to oil-supply curtailments.

The federal funds rate is the target interest rate set by the Federal Open Market Committee (FOMC). This is the rate at which commercial banks borrow and lend their excess reserves to each other overnight. The federal funds rate can influence short-term rates on consumer loans and credit cards.

Thereafter, interest rates came down but were still 12.3% in 1984 when the large powerboat business began to come back.

While millions around the world died, people in wealthier countries sought refuge in boats that provided safe recreation. The phenomenon fed on itself as more people got the idea when seeing friends and neighbors buying boats and embracing the lifestyle. The number of first-time boaters was reported to be as high as 30% of sales in 2020.

The average price of an inboard cruiser went from just under $800,000 in 2019 to more than $1 million in 2020, as reported by the NMMA. This happened for several reasons: people were willing to pay the MSRP in many cases, a couple of the lower-priced brands went out of business and the new boats were loaded up with more technology.

The average prices of fiberglass outboard boats went up by an average of 7.5% and sterndrive boat prices increased 14% in 2020 over the previous year.

Worldwide supply issues, consolidations among equipment suppliers and boat brands and labor shortages, among other things, contributed to even higher boat prices in 2021. The market was even tighter than in 2020 — because there was little-to-no inventory leftover from the previous year.

Sales in certain categories of boats were lower in 2021 not because of reduced demand, but because there was no on-hand inventory.

All outboards, no matter the brand, are more expensive than the inboard engines they replace. Due to the COVID-19 buying frenzy, all outboards from all four major brands are back-ordered for three to six months. Builders and dealers are on allocation — and they are not getting cheaper.

The Cost of Turning Inward

Because of supply disruptions of critical products caused by the supply-chain crisis and by Putin’s War, countries all over the world are placing a priority on producing these items at home. For example, the U.S. government is subsidizing the construction of new chip-making facilities within its borders. China is building its own aircraft industry so it doesn’t have to rely on Boeing and Airbus.

This inward-looking policy can only mean higher prices because the products were outsourced in the first place. After all, it was cheaper to do so.

Timing is Everything in Boat Buying

In the last 43 years, we can only remember three times when boats sold at significant discounts to their normal prices.

This Time is Different

In the 2008-2011 period, there were many new boats in dealer inventory across the country. As banks called in “Floor Plan” loans to dealers, most slashed prices to wholesale. Some went even below wholesale to raise cash. Further, builders who had to take back boats sold them at wholesale in many cases.

That situation does not exist today. It is the opposite. For two years, dealers have been on allocation by the brands they represent. That means there is a minimum of inventory on dealers’ books. This time around, dealers and their boat suppliers will be working hand and glove to make sure that supply does not outstrip demand.

As we often say, no one needs a boat except a drowning man. For that reason, boat sales of all sizes are sensitive to every ripple in the economy. A stock-market plunge, an oil-supply disruption, excessive inflation, an interest rate hike, a luxury tax or a war somewhere can all reduce consumer confidence and cause a sales drop.

Right now, we have all of those negative elements lining up to cause a perfect storm to slow boat sales. But, we think it will be a “soft landing” because inventories are minimal and future orders can be canceled by dealers, thus keeping them solvent.

This time around the boating industry’s transition to lower demand, in our opinion, will be orderly. Margins for the dealer and the builder will be preserved.

Should You Buy Now or Wait?

If we have learned anything over the past 50 years of monitoring the boat business, it is that prices never go down — except for the three blips mentioned above. Once the business does return, the boats always cost more than they did before the buying hiatus.

Boats are not a commodity. They are all hand-made and complex. Further, there is a minimum basic infrastructure that must be in place to support the manufacture of boats and this fixed cost must be borne by the units produced. The fewer boats built, the higher the fixed cost allocation is per boat.

Further, new technologies come along every year to make boats even more utilitarian, more fun and trouble-free than ever before. These enhancements are always added to the boats’ cost.

Moreover, the consolidation that has taken place over the last 20 years in the boat business has resulted in fewer brands and fewer companies building them. The same goes for their equipment suppliers, where there has been a consolidation frenzy over the last five years. That means competition pressures are far less than there were before.

In our opinion, new boats will never be less costly than they are today. If you want to buy a boat to hand down to your children, there will never be a better time than now.