The northern segment of the Great Loop route on the U.S./Canada border encompasses four of the five Great Lakes: Ontario, Erie, Huron, and Michigan. For some “Loopers,” however, cruising this far without exploring Lake Superior, the largest of the Great Lakes, would be like a road trip through the western U.S. without seeing the Grand Canyon; the experience would be incomplete. Here’s why you must go boating on Lake Superior.

Most Loopers plan to complete the Great Loop in a single calendar year. According to cruisers who covered all five of the Great Lakes, Lake Superior was an essential part of their Great Loop journey and appropriately named for many reasons. Lake Superior’s shoreline consists of three geographical categories: the Canadian shore, the Wisconsin and Michigan shore, and what’s commonly referred to as the North Shore—from the city of Duluth at the lake’s far western point to the Canadian border along the Minnesota shoreline.

To take the Lake Superior diversion, Loopers cruising from east to west will navigate in northwest Lake Huron to the St. Marys River and St. Marys Falls Canal that lead to the Soo Locks, which bypass the river’s rapids that fall over the 21-foot elevation difference between Lake Superior and the lower lakes. Recreational and tour boats use the smaller lock on the Canadian side, and commercial ships use the two large locks on the U.S. side.

The city of Sault Ste. Marie spans both sides of the U.S./Canada border, and docking at one of the marinas on the Ontario side to stock up on provisions before locking through to Lake Superior is recommended.

Regardless of which shoreline cruisers choose to explore, the one thing they have in common is a proclivity to changing weather. Experienced boaters know that monitoring the weather before and while cruising is key to staying safe. This is especially true on Lake Superior where atmospheric conditions can change more rapidly than on the other Great Lakes.

In addition to storms with rain, lightning, and high waves, it’s not uncommon for dense fog to roll in like a blanket and cover the lake, especially in June. The Great Lakes Cruising Club is a good resource that provides up-to-date harbor reports on more than 1,000 harbors and anchorages throughout the Great Lakes.

Although it’s geographically closer to Canada and the northern Minnesota shoreline, Isle Royale National Park, an archipelago of more than 400 islands, is actually part of Michigan. The pristine water, raw nature, and seeing the animals that come down to the water to drink while you’re at anchor is well worth the visit. Overnight boaters need a permit whether they’re at the dock or at anchor, and it’s recommended to request a permit at nps.gov prior to your arrival.

On Wisconsin’s shore, the Apostle Islands, also part of the U.S. National Park Service, offer a spectacular view both above and below the water, so slow your speed to take it all in. The town of Bayfield offers several marinas. Of special note is the largest of the Apostle Islands, Madeline Island, and its only town, La Pointe. The population, which increases significantly in the summer months, never loses its small-town feel. The Madeline Island Yacht Club is a full-service marina, here. During the winter months, La Pointe’s year-round residents access the mainland via windsled across the ice. Some use a hovercraft with skis. Others drive on an ice road when the ice is thick enough to sustain the weight of vehicles.

On Lake Superior, it’s nearly impossible to choose the best scenic attraction. But, most would agree that the shoreline to the west of the Apostle Islands is a strong contender. Caves cut into rocky red bluffs topped with evergreen trees line the shore. In the summer, kayakers explore the caves when the lake is calm. In winter, when the lake is frozen, hikers are treated to icicles hanging from the cave ceiling that glimmer like diamonds in the frosty light. Pictured Rocks National Lakeshore near Munising, Michigan, offers a stunning landscape of beautiful sandstone cliffs. It’s a natural attraction that draws visitors every season during the year. If you carry kayaks aboard your vessel, you’ll definitely want to use them here.

Boating on Lake Superior offers a special visual treat. The most outstanding scenic attraction is in the night sky, where the majesty and mystery of creation shows its handiwork as if by magic. Aurora borealis, or northern lights, are strongest in the fall and winter but can appear on Lake Superior year-round. Your best chance to watch them dance across the sky is away from any city lights and late on a clear night with no moonlight. Turn off any artificial light, let your eyes adjust to the darkness, look toward the north, and wait. They are unpredictable, which is part of what’s so rewarding when they do appear. Don’t take it for granted. Witnessing this miracle of nature is a gift that most have never seen with their own eyes.

Bayfield, Wisconsin, is a worthy boating destination on its own. The town offers quaint shops with homemade jams and local artisan-created crafts. Shuttle buses run from the marina to Big Top Chautauqua, a big circus tent that hosts music performances. Across the lake, Grand Marais, Minnesota, is another small town worth a stop. Michigan’s Upper Peninsula has many charming villages that are walkable and fun to explore, such as Copper Harbor on the Keweenaw Peninsula.

Bayfield, Wisconsin, is a worthy boating destination on its own. The town offers quaint shops with homemade jams and local artisan-created crafts. Shuttle buses run from the marina to Big Top Chautauqua, a big circus tent that hosts music performances. Across the lake, Grand Marais, Minnesota, is another small town worth a stop. Michigan’s Upper Peninsula has many charming villages that are walkable and fun to explore, such as Copper Harbor on the Keweenaw Peninsula.

Loopers with enough time and budget should make the journey to the westernmost point on Lake Superior. Head to the port city of Duluth, Minnesota, if only to see one of the few remaining aerial lift bridges that was built in 1905. 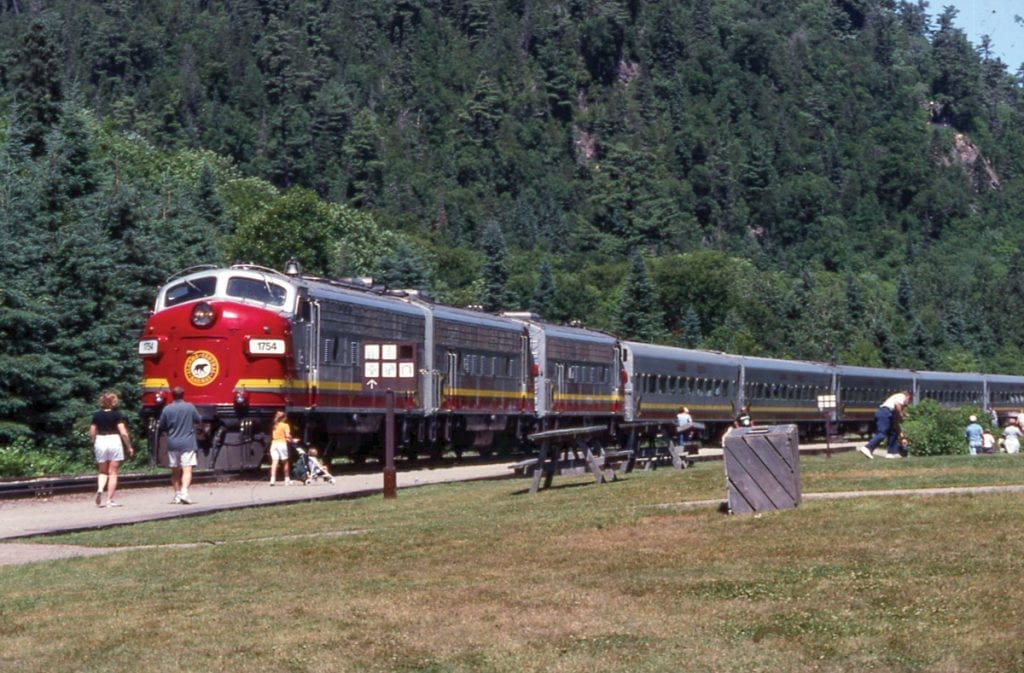 Commercial ships travel through the Duluth Ship Canal and under the bridge to the inner harbor. Canal Park has many restaurants. A favorite visitor pastime is a stroll along the canal, especially when ships enter or depart. After you’ve explored Lake Superior to your heart’s content and are on your way back to Lake Huron to resume the Loop, stop again in Sault Ste. Marie to take the one-day train ride north on the Algoma Central Railway Train Excursion.