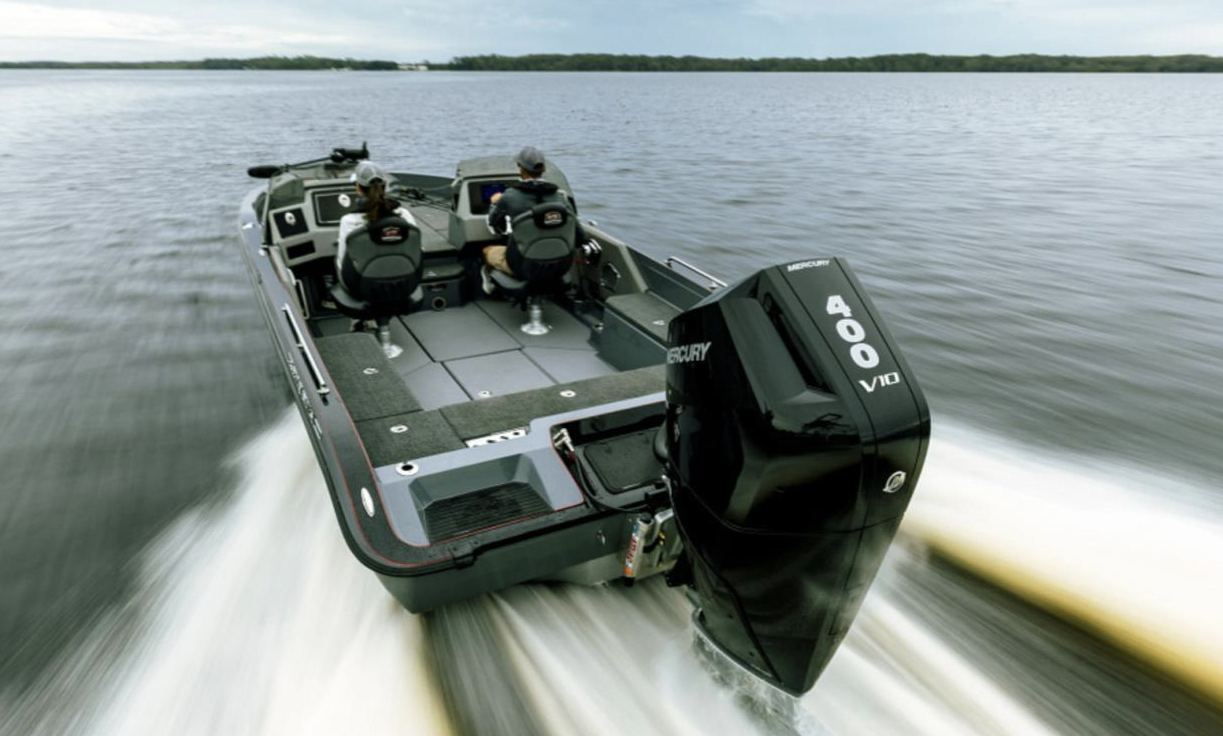 The new V10 has basic parameters advantageous for a wide range of applications, from large saltwater center consoles to single-engine freshwater fishing boats, to mid-size day boats, to pontoon boats and smaller center consoles, according to the company.

Weighing only 695 pounds and with the same industry-leading 26-inch mount spacing as the V8 outboards, the V10 engines maximize compatibility with current boat designs and transom widths. This lightweight, compact design provides multi-engine applications or repowering vessels with a compelling alternative to existing choices.

Mercury’s new naturally-aspirated V10 engine is not a cut-down version of it V12 600-hp model that it introduced over two years ago. Rather, it’s all new and differs from the V12 unit in several ways.

Mercury will now discontinue its 2.6 L supercharged outboard engines which is a design that is over 20 years old and has held the Mercury fort remarkably well in the 350-400-hp range.

Because Mercury is offering 20”, 25”, 30” and 35” shaft lengths, the company is obviously taking dead aim on the bass and freshwater aluminum boat market, as well as offshore center consoles. Neither Yamaha or Suzuki offer a 20” shaft, and so their engines are used primarily offshore, where historically Mercury was relatively weak until the last several years.

The V10 will have a good chance to widen Mercury’s penetration of the saltwater market both in center consoles, and also dayboat cruisers.

Getting Power to the Water

The new Mercury model does not have the two gears that the V12 has which makes it so quick off the starting line, and more efficient at planing speeds. This decision seems to have been done to keep both the weight and the costs down of the V10.

Purpose-built Mercury Props. Mercury’s press release said that its “engineers went back to first principles engineering and designed the all-new Revolution X propeller to perfectly match the V10 Verado in every way. Larger diameter and wider blades combined with the deep ratio of the new gearcase provide excellent handling, thrilling acceleration and high efficiency from low speed all the way to wide-open throttle.”

Power for the People

The new V10 has a class-leading 150-amp alternator, just as the V12 does, and it is proved popular. (The Yamaha 425 and the Suzuki 350, produce 90 and 54 Amps, respectively). The 150-Amp alternator can swiftly charge onboard batteries and intelligently support the boat’s electrical system.

The new Verados are not only compatible with the latest Mercury SmartCraft® technologies but will also be offered with an optional dual-mode 48V/12V alternator to seamlessly pair with Navico Group’s Fathom® e-power system, an integrated lithium-ion auxiliary power management system, providing boaters the opportunity to eliminate an onboard generator system.

Mercury has quite correctly calculated this setup to be the wave of the future for many powerboaters tired of the noise, fumes and maintenance of generators. This will further open the door to builders of heavy dayboats that now employ A/C, Seakeepers and the troublesome generators to supply the needed juice.

Calibrated to deliver full performance on 87-octane fuel, these outboards also feature efficiency-enhancing technologies, a closed-loop fuel system and Advanced Range Optimization (ARO), which precisely adjusts the fuel mixture and delivers the best possible efficiency at any speed, per Mercury

Adaptive Speed Control on the new outboards maintains engine rpm despite changes in load or conditions, making climbing large swells easier to climb and cruising at low speeds smoother. Transient Spark Technology electronically adjusts spark timing to optimize low-end power, something that was needed years ago in order to compete with the now extinct 2-stroke engine.

While these are not new technologies, they are proven improvements of the breed.

The V10 Verado engines will also be compatible with a new Mercury electric steering system for multi-outboard vessels slated to start shipping in February 2023. The new system will reportedly offer enhanced steering responsiveness, dramatically simplified rigging and will have, according to Mercury, more than 50% reduction in energy consumption.

Tim Reid, Mercury Marine vice president of product development and engineering is quoted in the press release as saying, “We challenged our engineers to improve acceleration and overall performance with the new V10 Verado outboards, while also making them quieter and lighter than competitors’ outboards in this horsepower range.”

The company says development of the V10 Verado outboards is a product of Mercury’s continued commitment to invest heavily in R&D and production capacity to keep up with robust customer demand.

The company has invested $2B since 2008, and its manufacturing footprint has expanded to more than 3 million square feet.