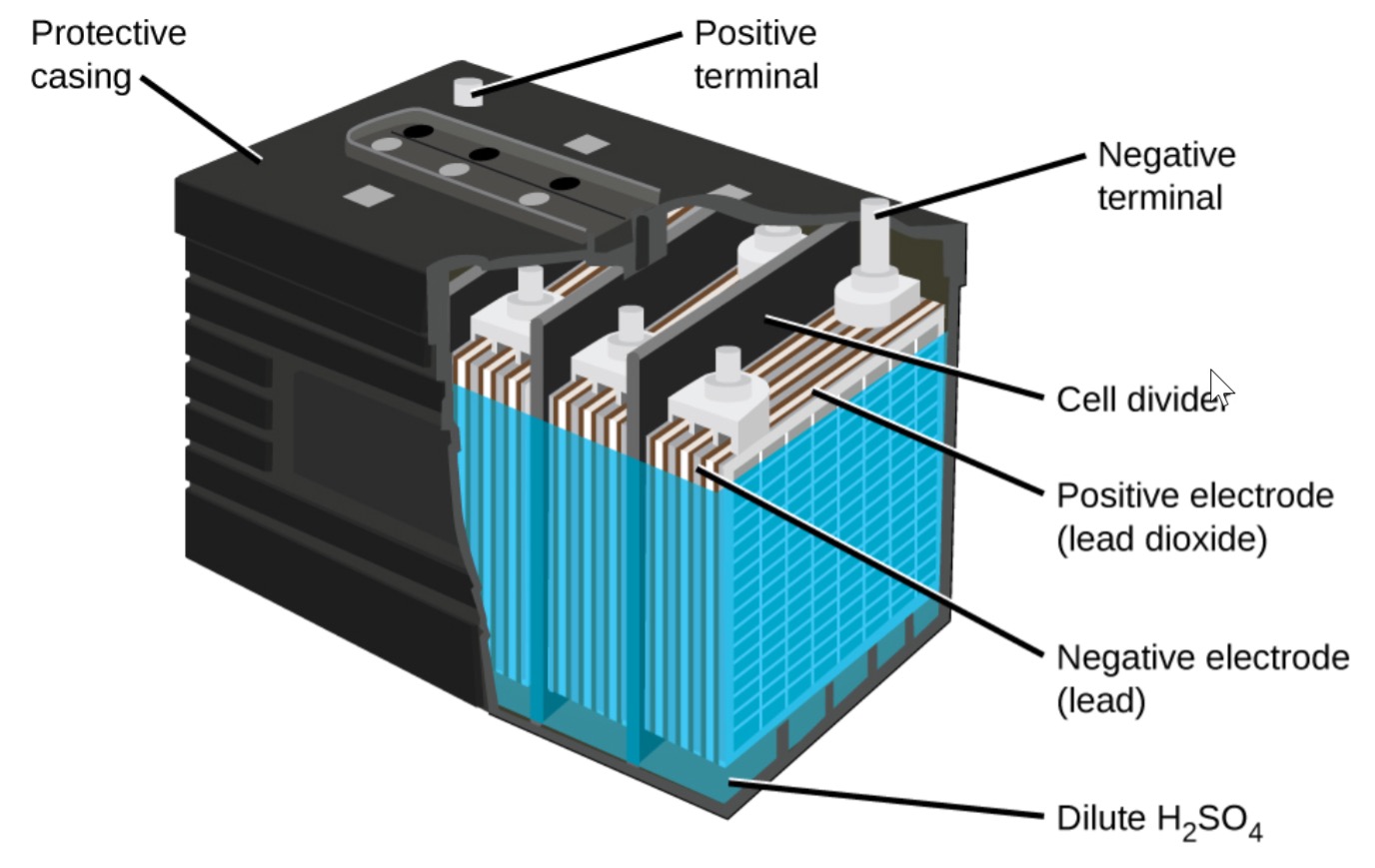 For many boaters, batteries and electrical matters, in general, are not their strong suit.  They feel more comfortable talking about horsepower, gallons per hour and top speed. But batteries aren’t going away and the more you know about them, the better your boat will be equipped to conduct its mission.  This primer on lead-acid batteries will answer most of your questions about this arcane subject.

Nearly all boaters need reliable, durable batteries, no matter what the boating pursuit or the budget. Boat batteries can range in size from the little 7-pound mini’s designed to power a kayak‘s sonar/GPS to the big 180-pound 8D’s putting out over 2250 starting amps, capable of cranking massive 12-cylinder CAT diesels. Specialized house batteries — deep-cycles — keep onboard electronics and lighting functional, whether you’re running a 21-foot center console or a 125’ motoryacht.

The batteries that suit you and your boat best depend on what they are needed for, and how much charging capacity is required. Batteries, no matter what their chemistry, fall into two categories:

In this report, we will cover conventional lead-acid batteries, which have essentially been used for at least the last 150 years, but have been improved and tweaked over that time to a point where they are relatively long-lasting, reliable and safe. In Part II of our report, we will address the relatively new lithium-ion batteries.

A starting battery is one designed to put out lots of amps for a short period of time to start gas and diesel engines. The battery is then recharged by the alternator, generator, shore power or solar power.

Unlike a deep-cycle battery, starting batteries are not designed to withstand multiple deep discharge/recharge cycles. Draining a starting battery can significantly shorten its life. That’s why repeated cranking without result is not recommended. (It can also overheat your starter and ruin it.)

The power of a starting battery is rated in cold-cranking amps or CCA—higher means more power. Check with your engine manufacturer for the recommended minimum CCA for your boat’s engines. The more amps the better. Large diesel engines in cool or cold climates should have block heaters to aid the process.

A deep-cycle battery is designed to withstand repeated deep discharges, with power usually then replaced by house-current via a charger. Deep-cycles are rated in amp hours or Ah. Higher Ah means more available power for longer and greater discharge before recharging is necessary.

A device requiring one-amp of current to function over the course of one hour will draw what is called one amp-hour of current, or 1 Ah. A 10 Ah deep cycle battery could power the 1-amp device for 10 hours theoretically, for example.

A 100-amp-hour battery’s approximate runtime to 100% depth of discharge can be estimated by dividing its 100-amp hour capacity by the amp load of the DC devices you plan to power.

A quick way to figure the approximate size of deep cycle you need is to total up the amps your electrical systems use in a day on the water. As an example, a 6 Watt navigation bulb in a 12 volt system draws 0.5 amps. If you use it for 10 hours in a day, the light bulb will consume 5 Ah (amp hours).

Most trolling motors use 5 to 30 amps an hour, depending on their load. Multiple big-screen electronics, stereo and other extras can add significantly to the load. Add them all up and you’ve got a pretty good estimate of how much capacity your deep cycle house battery should have to last a full day on the water.

Dual-purpose batteries designed to start an engine and to power accessories are particularly useful in small boats where minimal weight is important, as in an ultra-light, shallow-draft flats skiff, where a single battery may serve both purposes. Calculating the required energy capacity is particularly important when buying a dual-purpose battery.

Lead-acid batteries have been around since the late 1800s and have multiple varieties — the conventional wet flooded variety, AGM (absorbed glass mat) and sealed gel. You’re familiar with flooded-cell batteries because that’s what your car or truck has running all its electrical functions including starting (unless you’re an early Tesla adaptor).

The big advantage of standard flooded cell lead-acid batteries is their cost. They are far cheaper than some other types of batteries, in some cases (compared to a lithium-ion battery) by a factor of 10. If you really have to watch your boating dollars, they’re worth considering—and generations of boaters have gotten along just fine with them, both for starting and other uses.

The disadvantage of standard flooded cell batteries compared to other types now available is that first, they don’t last nearly as long. And these batteries are susceptible to damage due to the boat pounding hard and jarring the plates loose or cracking them.

Though you spend less to buy them upfront, a frequent replacement can add up—and you also have to deal with the aggravation of fitting them into tight bilges or engine rooms if you’re a do-it-yourselfer. Not to mention they are heavy.

Also, they can spill acid, and they put off fumes which in some conditions can be explosive—venting is essential. You have to occasionally add distilled water to keep them functioning at full capacity. And they corrode the battery posts and connections, as well as any other metal the acid may seep on should the battery tip—a quality vented battery box with strong tie-downs is a must to keep them safe. It is also an ABYC requirement.

AGM or absorbent glass mat batteries are a step up from the standard lead-acid batteries. An AGM battery contains fiberglass mat separators that wick the electrolyte solution between the battery plates. This material’s design enables the fiberglass to be saturated with electrolyte – and to store the electrolyte in a “dry” or suspended state rather than in free liquid form.

AGM batteries are somewhat more expensive than standard lead acid batteries, but they are extremely resistant to vibration—a major factor in many boating applications. They’re totally sealed, non-spillable and maintenance-free—great for batteries that have difficult access. AGM’s offer better cycling performance, minimal gassing and no acid leakage when compared with conventional lead-acid batteries.

They have a few negatives: over and under charging can affect their life and performance. They’re most reliable when their use is limited to discharge of no more than 50% of battery capacity, according to manufacturers we checked with. For this reason, you may want to revisit your computations on the number of Ah needed.

A gel battery is a valve-regulated lead acid battery in which an electrolyte together with sulphuric acid is combined with silica fumes to create a semi-solid gel. The gel batteries are virtually maintenance free. They use one-way valves that allow the internal gasses to recombine into water, removing any need to top up with distilled water or monitor water level.

Gel batteries are extremely robust, good for a high-speed boat where they’re likely to take a pounding. They are safe to be installed in places where ventilation is limited because they have a very low (virtually zero) gas/fumes production, which means you can install the batteries in tight spots inside your hull—and they can actually be installed on their side and continue to function.

Gel batteries lose power fast in cold weather, while AGM’s don’t, and they also require special chargers to avoid premature failure. Pricing is a lot higher than conventional, but not much more than AGM’s at around $250 to start for a 100 Ah deep cycle.

The Bottom line is there’s no single best battery choice for boaters—it all comes down to how you use the boat, how often you use it—and how much power you want to purchase. (And don’t forget the new technology on the horizon that seems poised to sweep the marine industry, lithium ion batteries—we’ll talk about them tomorrow.)

By Frank Sargeant and Jeff Hammond for BoatTEST