With the huge success of the 52 Fly, Absolute did some careful listening to the voice of the customer and determined that there was a desire for all the features the 52 presented, but in the footprint of a slightly smaller boat.  Well, isn’t that what everyone wants?  Of course, the design team couldn’t just brush the request off that easily and set to work at filling that goal.  The result is the 50 Fly, and it’s already a resounding success.  In fact, the first customer bought hull #1 after trading down from another brand’s 65-footer (19.81 m).

The main objective was to create a more livable room in a smaller footprint, but that carried with it the side benefit of keeping Absolute’s drive for comfort in the design.  She’s a bluewater cruiser that has a solid fiberglass hull with a separate grid stringer system with plywood bulkheads and decks, all bonded together to form a single, cohesive unit.  It’s a strength that can be felt in the handling and heard in the silence when cruising at speed.

The engine room is accessed from a hatch in the aft deck.  The ladder leading into the compartment is easily removable. Inside, the main focal point is the twin Volvo Penta D6-IPS 650 engines.  The pods just behind are directly connected to the engines.  At the forward end of the compartment are fuel tanks to either side.  There's a sight tube on one of the tanks and that makes sense because there's a cross-feed going directly over to the other tank.  There are fuel filters mounted to the sides of each of the tanks.   In the center of the two tanks is a SeaKeeper 6 gyro stabilizer.  By looking at the stringers, we see that the 50 Fly is pre-made to accept this optional gyro stabilizer.  Facing aft, in the center of the two engines is the 21.5 kW Cummins generator.  The air conditioning system is over on the port hand side with the engine start batteries just underneath.  On the aft bulkhead, there's an optional 600-gallon (2,271-L) /day water maker.

The aft deck is going to be the guests' first gathering area and it's quite comfortable.  Decking is all teak and there's a solid wood table on a fixed pedestal.   Just behind is an L-shaped sofa and a sunpad behind has three separate sections that convert into sunpads by removing the seat, sliding a section aft and moving the seat to the upper sunpad to complete the transition.  If the sun gets to be too much at the seating, there’s a drop-down sunshade right between the two stanchions that are supporting the overhead 6’5” (1.96 m) off the deck.

The fun continues out on the swim platform accessed through an acrylic stainless-steel framed gate and down two steps.   The platform is 58” (147.32 cm) and it's hydraulically actuated.  At the trailing edge, there's a grab rail. Over to the starboard side is a reboarding ladder.  The platform will accommodate a cradle in the center to mount either a tender or perhaps a PWC.

Just ahead and over the transom is an outdoor grilling station under a hatch.

Two gas support struts hold the hatch open.  There's an electric grill over on the port-hand side, a small serving area in the center and a sink over on the right-hand side.  A small storage cubby is just behind for condiments.

The door to the crew space is to the port transom and directly in front of the companionway is the head compartment.  Headroom is 6’8" (2.03 m) dropping down to 5’7” (1.7 m) for sitting headroom.  There's a shower wand that connects to a bracket right up on top of the side bulkhead.  And nowhere in sight is there a place for a simple roll of toilet paper.  There’s a glass vessel sink.   Moving into the starboard side, there's a single berth with windows leading out to the transom.

Fully forward, there are cleats on top of the toerails so that eliminates the need for chocks.  The anchor is supported by an anchor roller recessed into the toe rail.  It supports a 35kg Ultra Anchor with a swivel on it. This leads to a Quick windlass with an all-chain rode. A locker alongside is easily accessible.  Inside is a remote control for the windlass and bungees for hanging dock lines.  A freshwater washdown is just ahead.

Now there's one more exterior gathering area up in the flying bridge.  It starts out with J-shaped seating across the stern behind a solid wood table on a fixed pedestal.  Seating continues forward with wraparound seating that leads to a sunpad on the left side of the helm.  The sunpad also includes the ability to go into a chaise lounge in two different positions. Between the two seating areas is a refreshment center with a sink and serving area.  Storage underneath includes an icemaker and a refrigerator.

We move inside through a triple-wide opening glass door that gives us an entrance 4’1” (1.24 m).  Inside there’s headroom of 5’6” (1.68 m).  The galley is over to the porthand side and aft, so it's right in between the two social zones on the main deck.  It's fully featured with plenty of Corian counter space, a modest trash receptacle, a double burner electric stove with a vent fan just up above and a single-basin stainless-steel sink with a pull-out sprayer.  Below is a convection microwave oven.  Storage organization starts with a compartmentalized drawer for the silverware, and similar storage solutions continue over to the starboard side where all of the drawers have sorters for the included tableware.

Opposing seating consists of a U-shaped settee over on the porthand side wrapping around a solid wood table on a hi/lo pedestal. Notice that the table is offset on the pedestal so we can have it either close for dining or, by rotating it, a little further away for ease of getting in and out of the seating.  Usually, we see this solution accomplished with a sliding table and that would be preferred over having to change the position of everyone’s plate when rotating to let someone out.

To starboard is two-across seating with a flat-screen TV on an electric lift just behind.   Notice all of the windows are very large so they’re pouring natural light into this area.   There's an electrically-actuated opening window forward and to the porthand side, so we can add ventilation to the mix and a watertight side door to starboard.

Like the flying bridge helm, the lower helm is also starboard.  There’s a large compass just ahead of the soft-touch dash.  Below are dual 16” (40.64 cm) displays mounted into a carbon fiber panel.  There are air conditioning vents to both sides of the upper panel.  Below are rows of rocker switches to both left and right.  The steering wheel is mounted to a tilt base.  Off to the left is the Volvo Penta EVC display and the SeaKeeper gyro control panel which is also repeated on the Garmin displays.   There is the opening side door that gives us a full view of the starboard side while still having our hands on the controls, quick access to the side deck, added ventilation, and also access to a midship cleat facilitating shorthanded tie-ups.

Just under the helm seat is a wine chiller.  As we make our way down below, the companionway leads to an open atrium level that's nicely lit thanks to the huge windshields forward.

Thanks to the reduced space needed for the pod drive IPS engines, the master is roomy and full beam.  At the entrance, there are three steps down.  The stateroom is beautifully appointed.  There’s a center-mounted 77” x 62” (195.58 cm x 157.48 cm) berth.  Headroom is 6’2” (1.88 m), leaving 3’6” (1.07 m) over the berth.  There are steps to both sides of the berth and make yourself aware that there's a small bevel in the deck just inside the entrance to accommodate the shape of the boat's hull. There's plenty of storage over to the starboard side and a hullside window with an opening portlight.  To port, there’s a small sitting area with more storage just ahead, under another hullside window with an opening port.  At the forward bulkhead, there's a 32” (81.28 cm) TV with a refrigerator below.  Alongside is a vanity with compartmentalized storage with a mirror just above.

At the entrance to the stateroom, there’s a cabinet with a combination washer/dryer.  The head is just across and accessed through a sliding pocket door.

Back into the atrium, the next door leads to a day head that is equipped much like the master head in that it includes a walk-in shower.  An additional entrance door leads to the VIP stateroom.

We have an island berth in the center.  Hullside windows and opening portlights to both sides just pour natural light into this space. Headroom is 6’4” (1.93 m), leaving 3’5” (1.04 m) over the berth.  There’s storage to the side, underneath and in a hanging locker to starboard.  Notice that this stateroom has another pocket door, which is a great use of space on this boat.

Our last stateroom is to starboard, accessed through a door that opens inward. There's another hanging locker just in front of us with a full-length mirror.  Just abaft are twin berths that can be optioned out for a double berth.  There are two opening portlights and plenty of headroom.

The design team at Absolute set out to make a boat that had the roominess of their 52, but in the hull space of a 50-footer (15.24 m).  While it’s hard to validate that claim, the point is, I've been on a lot of boats bigger than this that didn't have the roominess and spaciousness that this one has.  So, it looks like mission accomplished.  The result is a comfortable boat that fits well for a family or a cruising couple with a lot of friends. 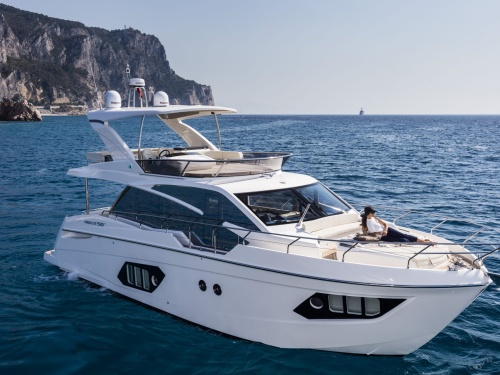 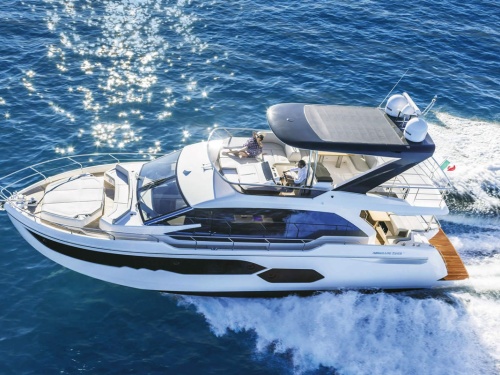 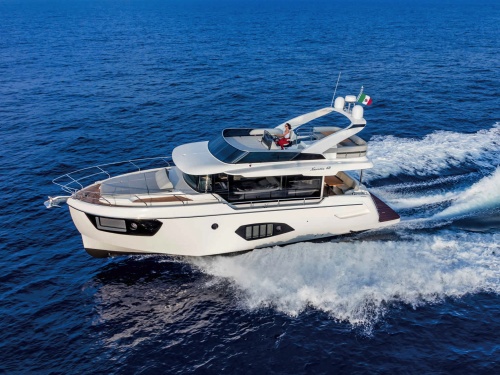 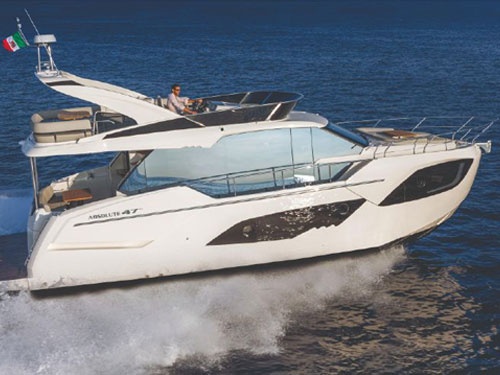