The Grand Banks 54 is the second in the company’s line of boats that are meant for cruisers that don’t want the typical Grand Banks displacement trawler-style boats but want to have faster-cruising speeds. She carries the same fit-and-finish that the company is so well known for. 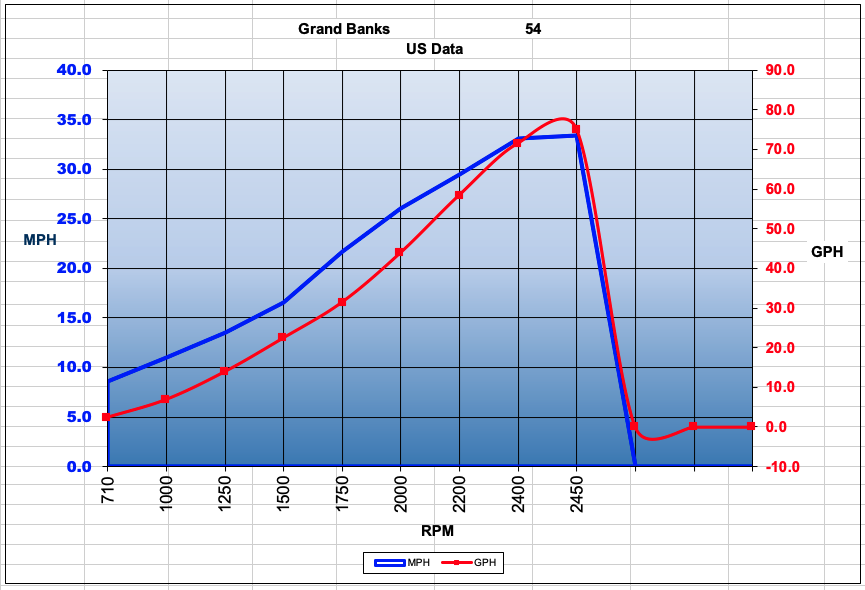 The Grand Banks 54 is the second in the company’s line of boats that are meant for cruisers that don’t want the typical Grand Banks displacement trawler-style boats but want to have faster-cruising speeds (the 60 was the first in the new lineup).  She carries the same fit-and-finish that the company is so well known for. But with faster planing speeds up to 29 knots, she can get to a destination quicker.  However, at 9.6 knots, she also has the distance cruising range of over 1100 nm that can allow her to loiter on location for weeks at a time.

With composite construction and lightweight carbon fiber materials, Grand Banks was able to take the weight out of the usual cruiser. This, coupled with a planing hull form, created a faster yacht while still keeping with the Grand Banks tradition of yacht-like qualities that the company is so well known for.

With a pair of 725 hp Volvo Penta D11 engines driving our test boat, we reached a top speed of 29 knots at 2450 RPM.  There really is no "best cruise" as the range increases fairly linearly as the RPMs are reduced, but… with the speed held back to her minimum plane speed of 11.8 knots and 1250 RPM, she showed a 14 GPH fuel burn that translated into a range of 680.2 nautical miles.  Drop her down further to 9.6 knots and she’s now a long-distance cruiser with a range of 1109.4 nm… all while still holding back a 10-percent reserve of the boat’s 898-gallon (3,400 L) total fuel capacity.

As we got underway, our tight confines gave me my first good impression of her outstanding low-speed handling characteristics.  There’s a low-speed clutch and I definitely recommend that it gets used for these situations.  Without it, her power and large props have her lurching ahead.  Once clear of any docks, then transition to regular power, which gives even better handling characteristics.  Don’t get heavy-handed on the steering, it’s just a light touch.  Underway, the dedication to balance is really evident at there’s just a slight bow high attitude when running that I found to be quite comfortable.  That keeps the bow down low and allows that sharp entry to do its thing and keep the ride smooth and stable.

On our return to the dock, we did it first with a starboard side to, so as to show how easy it is to dock and tie this large boat up single-handed thanks to the side access door.  Then we backed out, turned her around and brought her back in for a port side tie-up.  Here I discovered how easily she handles when backing down.  I simply used alternating power to provide the steerage and it worked perfectly.  A nudge of bow thruster brought us right alongside, and now it was great to have the drop-down windows to talk to the crew on the far side of the boat.  What a nice setup.

The Grand Banks 54 is powered by a pair of twin 725-hp Volvo Penta D11 diesels engines.  Balance was a key consideration with the 54, and as such, the engines are positioned further forward in the hull creating a more level running attitude.  This is a huge departure from builders that choose to add more interior space for adding extra cabins at the cost of handling and performance.  When the throttles are advanced on the 54, she simply rises up on plane rather than cause the bow to lift and thus climb up on plane.

There’s 5’ (1.52 m) of overhead clearance, and sound reduction is all the way around this engine room.  Humphree stabilizer fins are accessible to both sides.  One Racor filter for each engine and the generator are to the forward bulkhead and I'd like to see double filters with a crossover, but that is offered as an option.  The fuel tank is fully forward and there's a sight tube in the middle.  The 15k kW generator is right in the middle of the engines.  The main batteries are to the outboard sides of the engines, and the genset battery is in the center walkway with the generator itself.

The engines on our test boat were turning straight shafts, but an IPS version is also available that should increase the fuel efficiency by another 25-30 percent, according to the builder.  Of course, that will come at a higher price tag but serious cruisers that plan to put a lot of miles under the hull should benefit from that offset.

Side decks to both port and starboard facilitate boarding.  The cockpit space is a wide open area that can be either populated with deck chairs or left open.  There's a settee across the stern 7’6” (2.29 m) and storage is all around in the 20” (50.80 cm) high bulwarks with rails topping out at 32” (81.28 cm).  Forward is a serving area with a sink, pull out trash receptacle, plenty of storage and an ice maker.  To the starboard side are refrigerated drawers that can be any combination of refrigerator or freezer desired.  All this is under the protection of the extended flybridge deck 7’6” (2.29 m) off of the main deck

Exterior stairs to the flying bridge keep the salon open for entertaining.  The flying bridge layout starts on the port hand side with L-shaped seating that wraps around a triangular table with a beautiful finish to it.  Just across is a serving area with a Silestone counter, stainless-steel sink, refrigeration and storage underneath.  The helm seats can swivel around to add to the seating and all this is under the protection of the overhead 6’5” (1.98 m) off the deck

As we move aft, the teak decking gives way to nonskid decking.  Ahead and against the settee seatback is a covered electric grill with storage underneath.  Further aft is the boat deck, and an ES 1000 crane will be launching this 10’ (3.05 m) RIB to the port side.

The center-mounted helm console starts with the compass mounted directly in line with the wheel.  A carbon fiber panel houses two 17” (43.18 cm) multifunction displays.  The autopilot is right in the center.  Trim tab controls are integrated with the stabilizer controls.  In the center is a beautifully finished 20” (50.80 cm) vertically mounted wheel.

More of the Grand Banks charm and beauty just seems to come through in this GB54 interior.  It presents a modern look while still maintaining a yachtlike quality.  There’s opposing seating to both sides in the form of L-shaped sofas.  To one side, there is an expandable pedestal table. This is not in a fixed position, so it can be brought out to the aft deck for al fresco dining.  There's an overhead 6’7” (2.01 m) off the main deck and a grab handle going down the middle is one indication that this is an oceangoing boat and made to be away from the dock.

The decking here is carpeted, teak and holly is another option.  There are storage drawers underneath the seats all the way around, and more storage is just ahead and under the helm seat, including the entertainment center over to the starboard side.

Massive windows all around pour natural light into the space.  Three of these windows are electrically-actuated to drop down and not only add ventilation, but also allow an operator from the lower helm to easily communicate with the crew handling lines.  This, along with the opening side door, add significantly to the 54’s allure to the owner-operator that typically handles the boat short, or single handed.

The main deck helm is located just ahead of the double-wide helm seat that's on an island, so we can walk around all sides of it. Notice that there's a flip-up bolster, and that makes it very convenient for standing behind the helm, which gives us 6’6” (1.98 m) of overhead clearance.  Just alongside is the observer station on a 10” (25.4 cm) elevated platform.  As for the helm itself, it’s really a very functional helm.  We see a lot of boats where the lower helm is kind of put in as an afterthought, not so in the case of the 54.

The panel has twin 17” (43.18 cm) displays. The compass is not quite in line with the helm, it’s a little bit offset. At the lower panel is a Garmin multi-data display, the autopilot, spotlight control and trim tab control.  The thruster controls are electric and proportional, plus we can have activation buttons to keep pressure on them to give a slight hold against the dock for those times when operating short, or even single-handed.  There are Humphree trimtab controls that, as with the upper helm, operates in conjunction with the Humphree stabilizing fins.   The wheel is another beautifully finished version mounted vertically.

Our test boat had the galley-down configuration and it works well.  It provides more room to the on-deck social areas and creates a two-stateroom layout instead of three.  With overhead hatches in each room, there is no shortage of natural light.  There’s storage under the companionway stairs, and by releasing a latch and tilting them forward, access is provided to a combination washer/dryer.

This galley features Silestone counters and a single basin stainless-steel sink.  There’s storage just behind.  Below are refrigerated drawers in combination of refrigeration and freezer desired.  There’s also a dishwasher, dry storage, a combination convection/microwave and an induction cook top with an exhaust fan just above.

There's plenty of storage all around.  Just to the aft bulkhead is a large hanging locker.   A light going on when the door is opened would be a nice touch.  Additional storage is in draws underneath the berth and to both sides in the nightstands.  Of course, there is an ensuite forward with a separate walk-in shower.

The VIP is located forward and this berth measures 81” x 62” (205.74 cm x 157.48 cm) accessed from 10” (25.40 cm) steps to both sides.  This stateroom is also well appointed for storage and access to the private ensuite is to the port side.  This head has a separate entrance, allowing it to be utilized as a day head as well.

Pricing for a yacht of this caliber is not just a matter of how much, mostly because there are so many variables offered for customization, but with that said, figure that this yacht will be in the $2.72 million range.

The Grand Banks 54 is in every aspect a cruising owner’s yacht.  Not only can she cruise in classic Grand Banks style, but she can also put significant miles behind her on a single load of fuel.  In every way, she’s precisely what Grand Banks owners are looking for, with the ability to reach planing speeds when desired.  She's a perfect match for the next generation of cruisers that the industry is now facing.

More importantly, the 54 was built with no compromises.  Every detail was carefully thought out, and the meticulous work shows throughout. 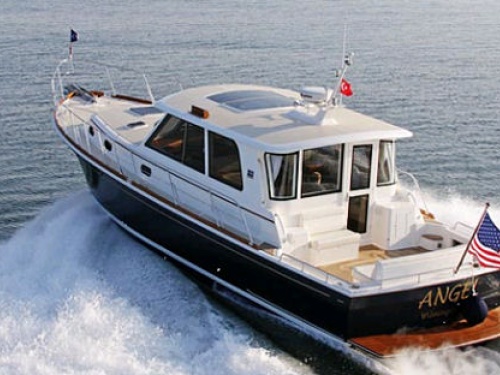 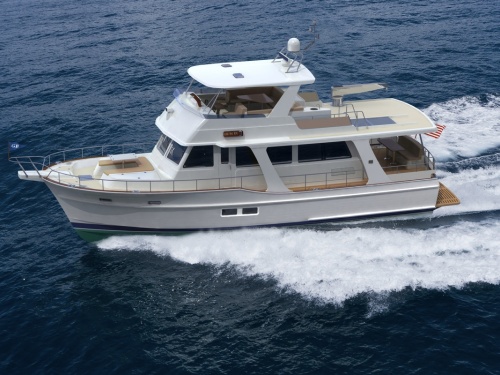 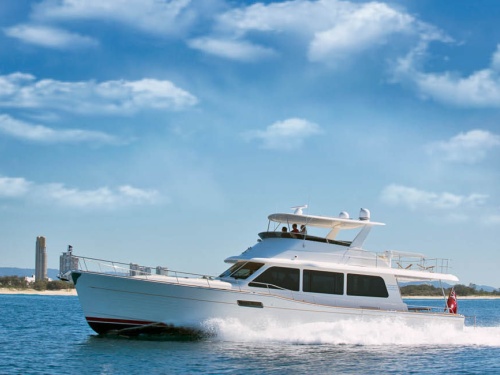 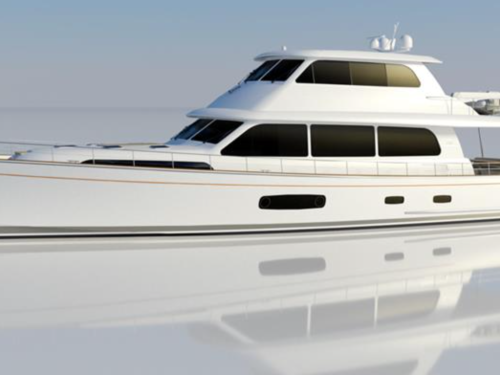