The Krogen Express 52' is a boat made for coastal cruising and clearly spending long times away from the dock. First off, it's important to make the distinction that it isn't a Kadey-Krogen. It's a Krogen Express. There's a definite distinction between the two. 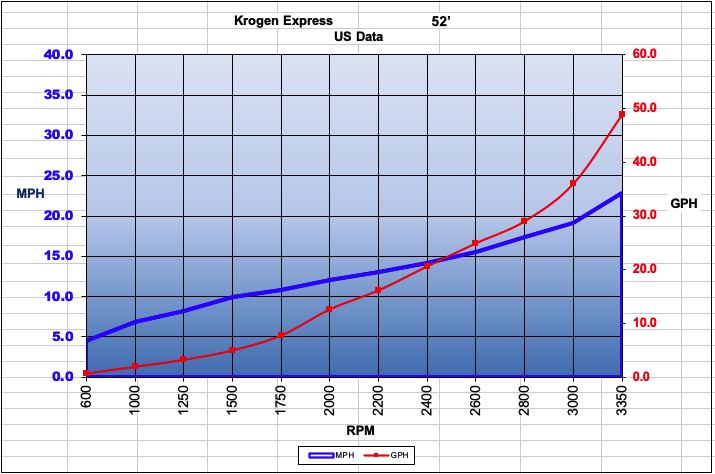 The Krogen Express 52' is a boat made for coastal cruising and clearly spending long times away from the dock.  First off, it’s important to make the distinction that this isn't a Kadey-Krogen.  It's a Krogen Express.  There's a definite distinction between the two.   A Kadey-Krogen is a full displacement yacht.  This is semi-displacement. They're both designed by Jim Krogen, but definitely different yachts, different companies and different operating characteristics. So with that said, the first thing I want to look at is the livability.

The first impression is that of a home-like atmosphere. Of course, we're on a yacht but it doesn't have that characteristic of dark woods we typically see in the yachting world.  This has bright woodwork, nice natural light coming in, and an overall fit-and-finish that we've come to expect from Krogen Express.  It also has a very open feeling with 6’9” (2.06 m) of overhead clearance that includes grab rails going all the way across.  That alone is a first indication that this a yacht made to be away from the dock.

The windows are rather large so there's great visibility. They also come down quite low, which provides continued visibility from the seated position.  More importantly, these windows open, and that’s something you very rarely see nowadays.  And because they open, they’re not tinted to the darkness level that makes this salon into an enclosed cave.

While the sofa doesn't convert into a berth, it would be easy enough to simply remove the seatback cushions and use it as one.  The table is freestanding, making it accommodating to take out into the aft cockpit for alfresco dining. Forward is a 32” (81.28 cm) TV.

Fit-and-finish wise, there’s excellent joinery work in all the satin finish Cherrywood.  The decking is Cherry and Holly and made up of real planking as opposed to a veneer.

The galley is U-shaped, quite functional and full of elegant solutions.  There are fiddles around all counters.   Granite is standard, but this owner chose marble for the counterwork.   Over the propane stove, there’s a large bi-fold piece of marble that serves as extra workspace.  It opens on dual gas struts for cooking.  Just above is an opening porthole for ventilation.  There's a full-sized refrigerator freezer fronted in cherry.

The aft deck on the 52' is 104 sq. ft. (9.66 sq m) of open space to populate with pretty much whatever is desired.  It’s all protected from the extended overhead 7’ (2.13 m) off the deck.  Open the center gate to access the 26” (66.04 cm) deep swim platform.  Right alongside the door is a hot and cold freshwater shower.  There are also boarding doors to both port and starboard, with latches to hold them in the open position nice and high.

We can access the raised pilothouse either through the salon and galley, or via a pair of Dutch doors to port and starboard.  Grab handles are again across the overhead.  There’s a raised dinette providing company for the operator and it easily converts to a berth for the off watch.  The helm is well laid out and includes redundant systems throughout.

The flying bridge is accessed from stairs at the rear of the raised pilothouse, allowing for quick access to and from the two operating stations, and of course to the side decks.  This makes short work of operating short-handed as most cruising couples do.  It’s also great for communication from the galley (“You want mayo on that sandwich?”).

Gatherings will be at an L-shaped settee with storage underneath.  Typically, there’s a protective Bimini overhead, but this is the first model with a hardtop.  It’s 6’8" (2.03 m) off the deck, and since we have a hardtop, we can fully enclose this whole flybridge deck.

Further aft is an open space that’s easily populated with deck chairs.  Forward is a propane grill, and this area is not under the protection of the hardtop.  A rail separates the open cooking area with the boat deck that includes a standard 11’ (3.35 m) tender with a 30-hp Suzuki outboard that'll get launched with the 1,000-lb. (453.59 kg) capacity crane to the boat’s porthand side.

A forward set of stairs from the raised pilothouse leads to the staterooms.  The master stateroom is fully forward, and spacious is an understatement.  Because the bow rises up to provide so much freeboard, this cabin boasts a full 7’4” (2.23 m) to the overhead.  The berth is center mounted and it's a residential Queen at 60” x 80” (152.40 cm x 203.20 cm).  There are seats to both sides to sit and relax while getting ready for the day.  Of course, steps give easy access to the berth.  The berth lifts on electric actuators to reveal storage, plus there's drawer storage everywhere.  Krogen Express craftsmen even utilize what would otherwise be dead space to the side bulkheads for additional shelf storage.   Natural light is provided from an overhead hatch and four opening portlights.

The ensuite has a separate walk-in shower, an opening portlight for ventilation, a rain shower faucet and a seat.  There's a single-basin sink mounted into the marble counter.  Again, granite is the standard.

Aft and to the starboard side is an experience in creativity on the part of Krogen Express.  The VIP stateroom serves primarily as a place of relaxation as well as office space, with a further nod to overnight accommodations.  It really exemplifies the 52' as a cruising couple’s boat.

There’s an office desk and a sofa that easily converts into a berth that sleeps two.  Additionally, the forward bulkhead conceals a Pullman-style drop-down berth, making this a three-person stateroom.  There’s deep storage and two additional lockers plus drawer storage underneath the sofa/berth.

Just outside the stateroom is a cabinet with a stacked washer and dryer.  Thankfully,  the dryer is vented and it's 240-volts so yes, it does actually dry clothes.  Across to port is the day head that is outfitted much like the master with a separate walk-in shower, opening portlight for ventilation and plenty of storage.

The engine room is just behind and it’s positioned right under the raised pilothouse, which gives it headroom of 5’10” (1.77 m).  There’s 16” (40.64 cm) of walkspace between the twin 440-hp Yanmar engines.  There are 185-gallon (700 L) water tanks to both sides, and both include sight tubes showing the level.  There’s easy access to the outboard sides of the engines to access the engine start batteries.  Each engine is fed from dual fuel filters.

Moving aft, there’s a definite reduction in the overhead clearance as it drops down to 3’5” (1.04 m).  There’s an overhead hatch that leads into the galley.  Fuel tanks are to both sides and each holds 350-gallons (1,324.9 L), and both include sight gauges.  Being a cruising yacht, both tanks also have large access ports for cleanout times.

The 52' is a heavy boat made for going the distance so naturally, she has a solid feel to her handling.  Test day had near zero visibility and calm conditions, but light waves were completely unfelt.  Onboard she has a responsive feel to the helm and the response comes slowly, as expected.  Anytime she is cruising it's expected that the autopilot will be doing the work and the operator reverts to monitoring status.  That said, she does have a predictable response when cranking her about, so when it comes time to avoid the myriad of fish pots and such that decorate our waters, she's up to the task.

At the dock, her low-speed maneuvering qualities were well suited and thruster responses are gentle and forgiving, but forceful enough that the crosswinds or cross-currents will be easily opposed.  Thanks to the side doors, it's easy to communicate with the crew handling lines.  From all perspectives, this is an ideal owner/operator’s boat.

Having spent a lot of time on this boat, it’s easy to see that a lot of thought has gone into making this an ideal cruising couple’s boat.  She's also excellent for spending time offshore or even as a liveaboard. Even though she’s not intended for crossing oceans, she’s just so inviting as an extended cruiser.  And that’s just what Krogen Express customers are looking for.