The Regal 42 FXO is an outboard-powered flying bridge motoryacht. The outboards enhance her utility by opening up the cockpit and adding immense storage in the lazarette. Belowdecks, she has two staterooms that could be considered masters and an optional day head is available. 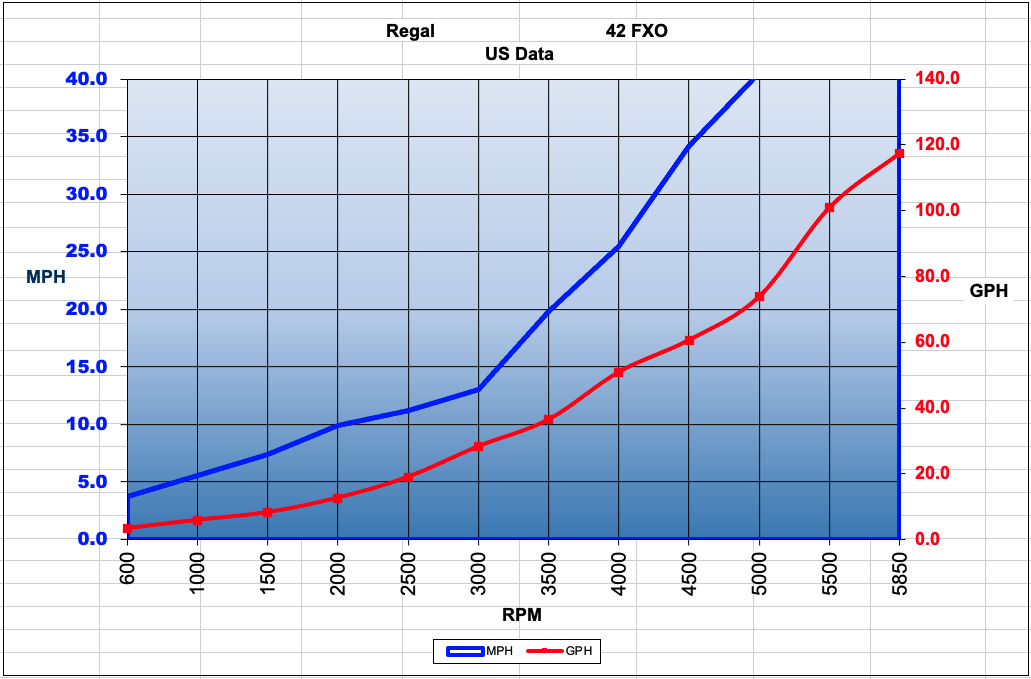 Regal Marine designed the 42 FXO for triple outboards to make her a more versatile boat for families who want to hang out at the sandbar or cruise the local waterways. She has a large flying bridge and cockpit, which blends seamlessly with the salon thanks to clever door design. Her accommodations deck has attributes found in larger yachts including an atrium and a refreshment center.

Handling. In maneuvers, our test model had sportboat-like handling and good response to helm input. She likes a lot of trim so get her up on plane and bring the outboard trim to about half on the gauge. That puts her into an optimum running attitude. Around the docks, having the torque of triple XTO Offshores under the control of the Helm Master joystick and a bow thruster means a captain can put the 42 FXO wherever he or she wants.

The Stern. The swim platform and outboard mounting bracket are built into the 42 FXO’s bottom, creating a single strong structure. In addition to supporting the outboards, this creates more aft buoyancy, which results in less bow rise when coming on plane. Swim platforms that are 3’ (.91 m) long extend aft past the engines on each side and the port side has a four-step reboarding ladder in a locker. For maintaining the engines, there’s an 18” (45.72 cm) deep full-beam walkway between them and the transom.

To starboard, there’s a 50-amp shorepower cord on an electric reel, plus the television antenna connection and a city-water inlet. There’s a pull-out freshwater shower just above. Further up on the stern are fills for gas and diesel because our test boat had the optional diesel generator. A hatch opens a large trunk locker. Push a button in the cockpit and the entire aft seat structure lifts on a power lift to provide access to the lazarette. Inside, the area has 42” (106.68 cm) of overhead clearance plus plenty of dedicated shelving, drawers, and overall space. There’s a day hatch and ladder for access from the cockpit. To port, the fuel-water separators with individual gas shutoffs are in reach and we could get to the batteries and generator.

Side Decks. Regal designed the 42 FXO with boarding steps at three different heights outboard of the cockpit on each side so passengers can step aboard from a water-level floating dock at the lowest level. If the tide is dropping and the boat is sitting a little lower, use the middle step, and when it’s dead low use the top one. Regardless of which one a crewmember uses, it’s an easy transition to the symmetrical side decks that start aft at 16” (40.64 cm) wide with 21” (53.34 cm) tall rails outboard. There are also rails on the cabin house. Alongside the windshield, the deck level inclines up slightly and widens to 18” (45.72 cm) with the rails now 24” (60.96 cm) off the deck.

The Bow. On the foredeck, the 42 FXO has a sunpad that’s 81” (205.74 cm)  long and 63” (160.02 cm) wide. Backrests in the forward section can be set in three different positions while the aft ones can be raised in two positions. There are beverage holders alongside, and instead of a fixed remote control for the stereo, Regal provides two Bluetooth units that can be used anywhere on the boat. Our test model had the optional cabana sunshade for the area. Forward, the windlass is beneath a centrally-positioned hatch in the deck and the anchor passes through the stem. There’s a 10” (25.4 cm) cleat for securing the rode and a hatch to starboard has a battery switch for the windlass, plus an emergency handle and a washdown. To port is a locker that has line hangers and space for fenders.

The Flying Bridge. Moving back down the side decks, on the port side of the cockpit, there are open plan stairs with courtesy lights on each tread plus tall side rails. Immediately to the right at the top of the stairs is a lounge that wraps around to starboard. A table can be inserted and there’s storage in the base. Forward to starboard is a Corian countertop with an optional refrigerator in the base. At the helm are two forward-facing seats. The port side seat is multi-position, plus it can lay flat to create a sunpad. Forward, alongside the helm, is a small, flat sunpad. The flying bridge can be protected by a collapsible Bimini top.

Flying Bridge Helm. The upper helm has a glass-dash configuration with optional twin 16” (40.64 cm) Garmin multifunction displays. A single 22” (55.88 cm) unit is standard. The entire panel can be backlit for nighttime use. Accessory switches are to the left of the tilt steering wheel with the Yamaha ignition switches just below, and outboard of these is the VHF radio. Immediately to the right of the wheel are connectivity ports with a storage tray just ahead. To the right are the digital controls with the trim tab panel aft. Abaft the tabs is the thruster stick, and aft of this is the Yamaha Helm Master joystick.

The Cockpit. Back down in the cockpit, there’s a passage to the swim platform. For entertaining, there’s an L-shaped seat that wraps around to starboard. At the forward end is a galley that includes an electric grill under a hatch and has a refrigerator in the base. A pedestal table can be installed on the deck. The extended flying bridge shades the area and has 6’5” (1.95 m) of headroom underneath. To facilitate boarding from the starboard side, remove the bottom cushion and backrest. The walkway doubles as a hatch that opens to access battery switches.

The Salon. The transition into the 42 FXO’s salon couldn’t be easier thanks to sliding aluminum-framed glass doors that fully open to create an opening that’s 5’11” (1.8 m) wide. To starboard, the galley has a Corian countertop with removable sections that uncover the sink and double-burner electric stove. Regal provides dedicated racks for the covers so they won’t get lost or slide around. In the forward port corner, another hinged hatch is above the wastebasket. There’s also a convection-microwave oven and refrigerated drawers, plus a plethora of storage options. Overhead, a 32” (81.28 cm) TV folds down quickly so folks on the settee to port can watch it. The settee is on an elevated platform that’s 9” (22.86 cm) off the deck and is outboard of a 55” by 22” (139.7 cm x 55.88 cm) table on a fixed base.

The Lower Helm. The 42 FXO’s lower helm comes standard and it’s a mirror image of the upper station with the glass dash design. To the left of the tilt wheel, the lone addition is the control for the Fusion stereo and there’s a switch for the power-adjustable captain’s seat on the accessories panel. To the driver’s right, working aft from the bow thruster knob, we have the digital shifts and throttles, the Helm Master joystick and the trim tab panel. Outboard in the gunwale are a 110-volt outlet and an air conditioning duct.

The Atrium. Centrally positioned stairs forward of the helm lead to the 42 FXO’s cabin deck. Alongside the steps is a hatch that opens the boat’s main distribution panel. It’s separated by 12- and 120-volts respectively. Each tread in the stairs is hinged and has storage underneath. The entire stair set pulls forward to access the Seakeeper gyroscopic stabilizer that is available standard on the 42 FXO. At the base of the stairs is an open atrium that picks up natural light from the windshield above. There’s also a refreshment center that has another Corian counter, a sink, a hullside window and a refrigerator. An owner could replace the refreshment center with an optional day head.

The Forward Cabin. We’re not going to designate either stateroom as the master quarters because they’re both pretty darn nice. The bow cabin has an island berth accessible from both sides. Headroom is 6’3” (1.91 m) with 3’7” (1.09 m) above the berth. There are fixed windows outboard on each side, plus an overhead deck hatch that has a shade and a bug screen. Frosted glass hatches open small lockers outboard of the headboard on each side. There are drawers in the base of the berth as well. A 27” (68.58 cm) TV was on the aft bulkhead with a hanging locker on the opposite side.

The Head. The 42 FXO has a head with entry from the atrium area or a door in the forward cabin. Inside, it has Corian counters, a large window, a vessel sink, a toilet and a separate shower.

There aren’t many outboard-powered flying bridge boats, but we think Regal has a potential winner in the 42 FXO. A family can pull up to a beach or sandbar, trim out the motors and enjoy a day or even a weekend getting away from all the pandemic craziness. She has the outdoor lounging space for everyone to enjoy the fresh air. Indoors, her salon has an open feel as well. 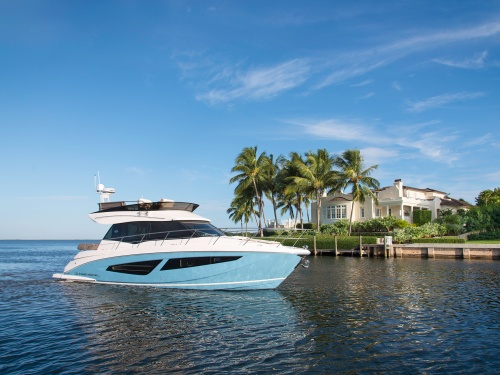