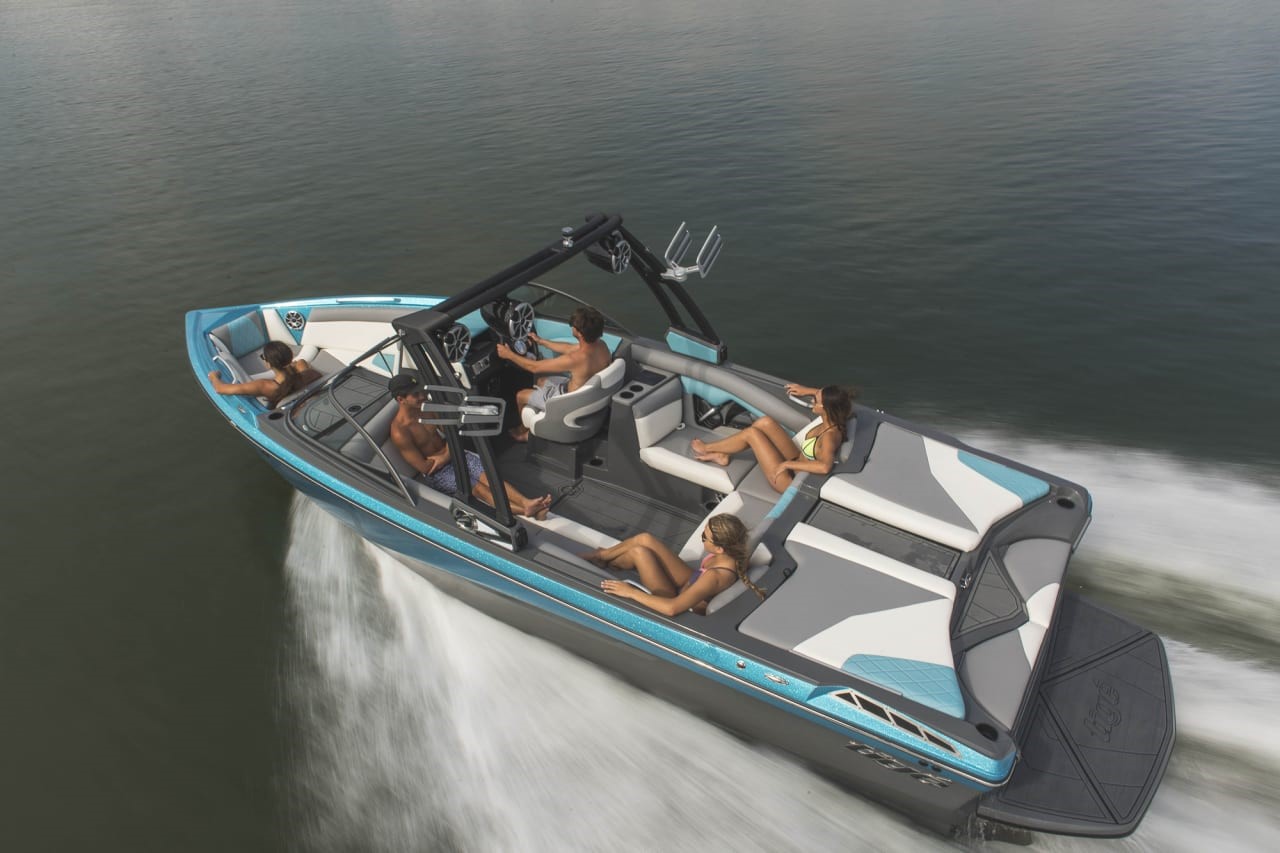 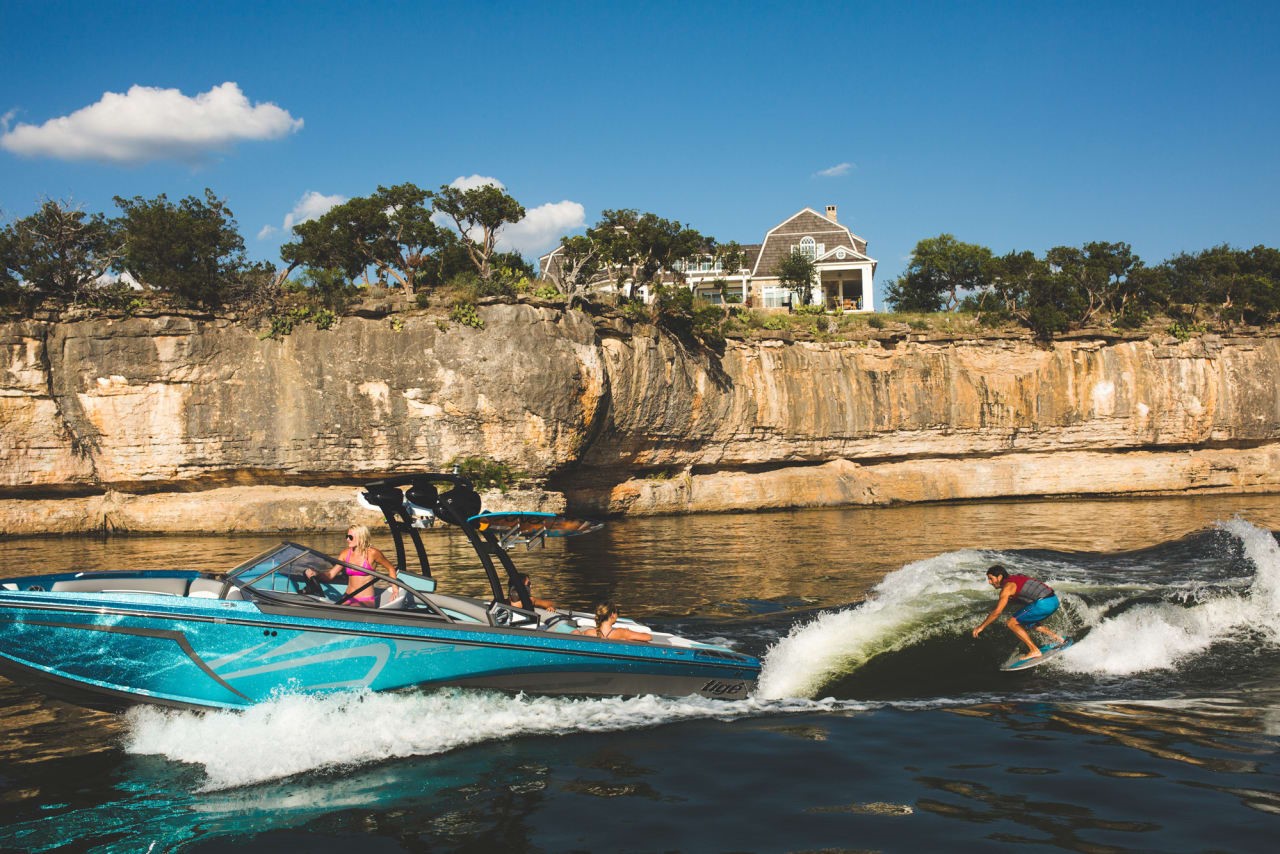 The Tigé R23 tailors its wake for a wide variety of tow sport activities and automates wave selection through a touchscreen program called GO.

Finding a wake and ski boat can be like comparing apples and oranges, they are two different beasts – good or great at one or two things, but not everything. Now there is a boat, the 2020 Tigé R23 that is versatile enough to slalom, board, surf behind, or act like a normal runabout. This 23' (7.01 m) boat has full trim capability with its third generation Tigé Adjustable Performance System (TAPS 3T). The R3 also manages ballast, speed, and trim level through a proprietary touchscreen system called GO that coordinates all of the functions at the touch of a button – and it won’t break the bank doing so.

The R23 is positioned as a powerful, versatile, and easy to operate wakeboat. And with advanced wake boat features and inclusive trailer package it creates value in the less expensive range of the burgeoning wakeboat market.

The Tigé R23 has a less extreme bow flair than most boats in class, yet still accommodates up to 16 passengers. 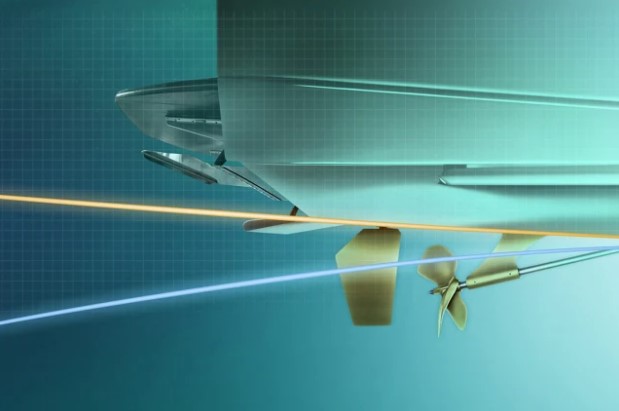 Water adheres to a curved surface. In fluid dynamics, this is known as the Coanda effect and is the principle behind Tige’s patented convex hull design.

The patented convex V-hull is curved up toward the transom with a continuous rocker, similar to the surfboard and wakeboard design. This keeps flow attached so it can be directed as the boat is trimmed and ballasted.

Rather than having a flow based on hull shape and ballast alone, TAPS provides additional control of the running attitude and wake shape. There are three tabs, built to military specs, that work in conjunction with the hull design and ballast system that are linked to a computerized touchscreen system called GO that controls precise wave patterns. GO is ‘smart’ enough to be able to adjust for skill level and control speed to the other elements of wavemaking. 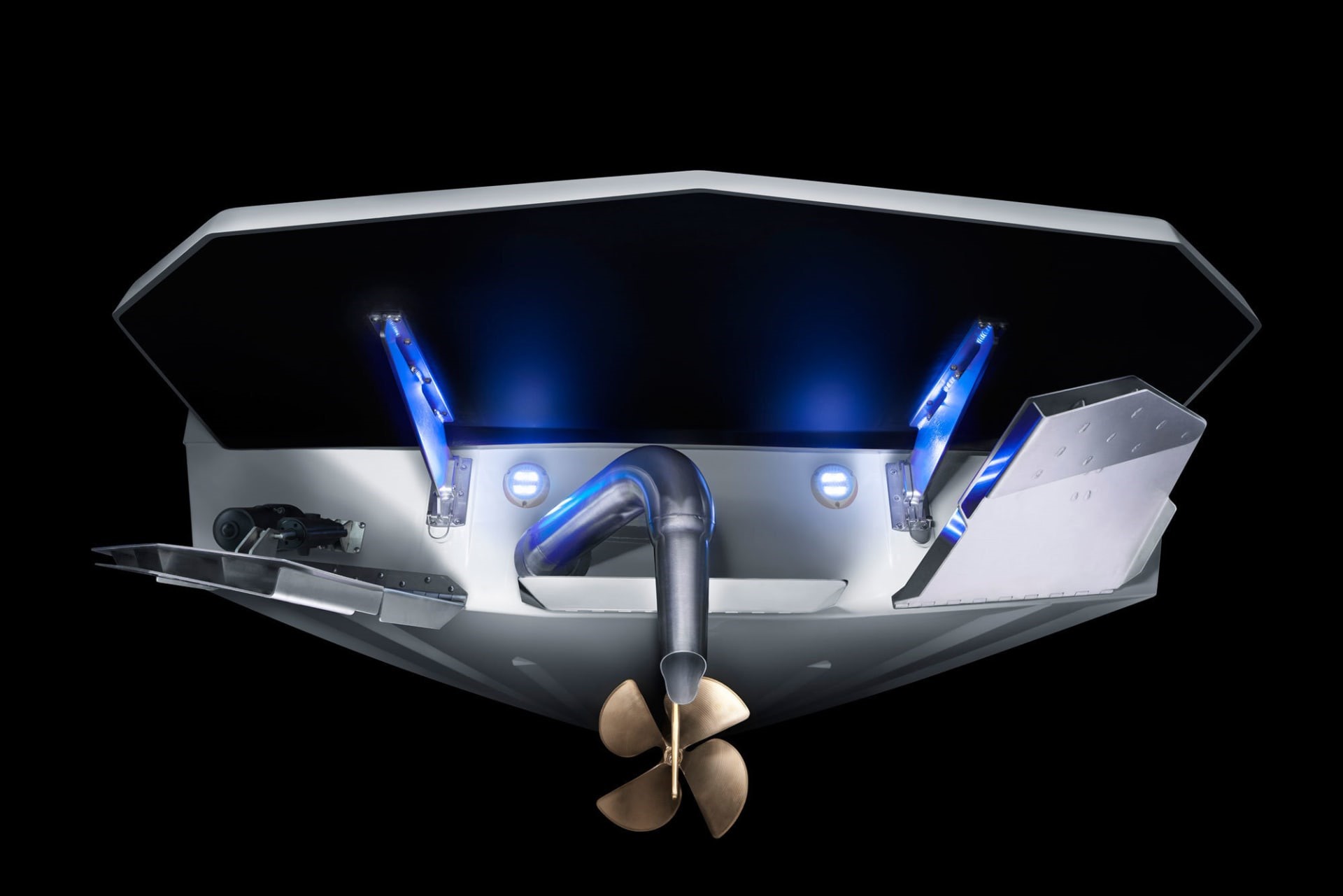 TAPS was first introduced in 1995 and has been refined with the third generation released in 2015 – TAPS 3T. When controlled by GO, it allows the operator to select the perfect wake for the particular activity. And it allows the Tigé R3 to go from wakeboarding wake to a slalom wake in less than five seconds at the touch of a button.

Ease of use is the primary goal of the GO system. Whether wakesurfing, wakeboarding, skiing, or heading home, a push of a button controls speed, ballast, running attitude, and wake automatically.

The unique TAPS tabs with hydraulic actuators are controlled by the GO system. 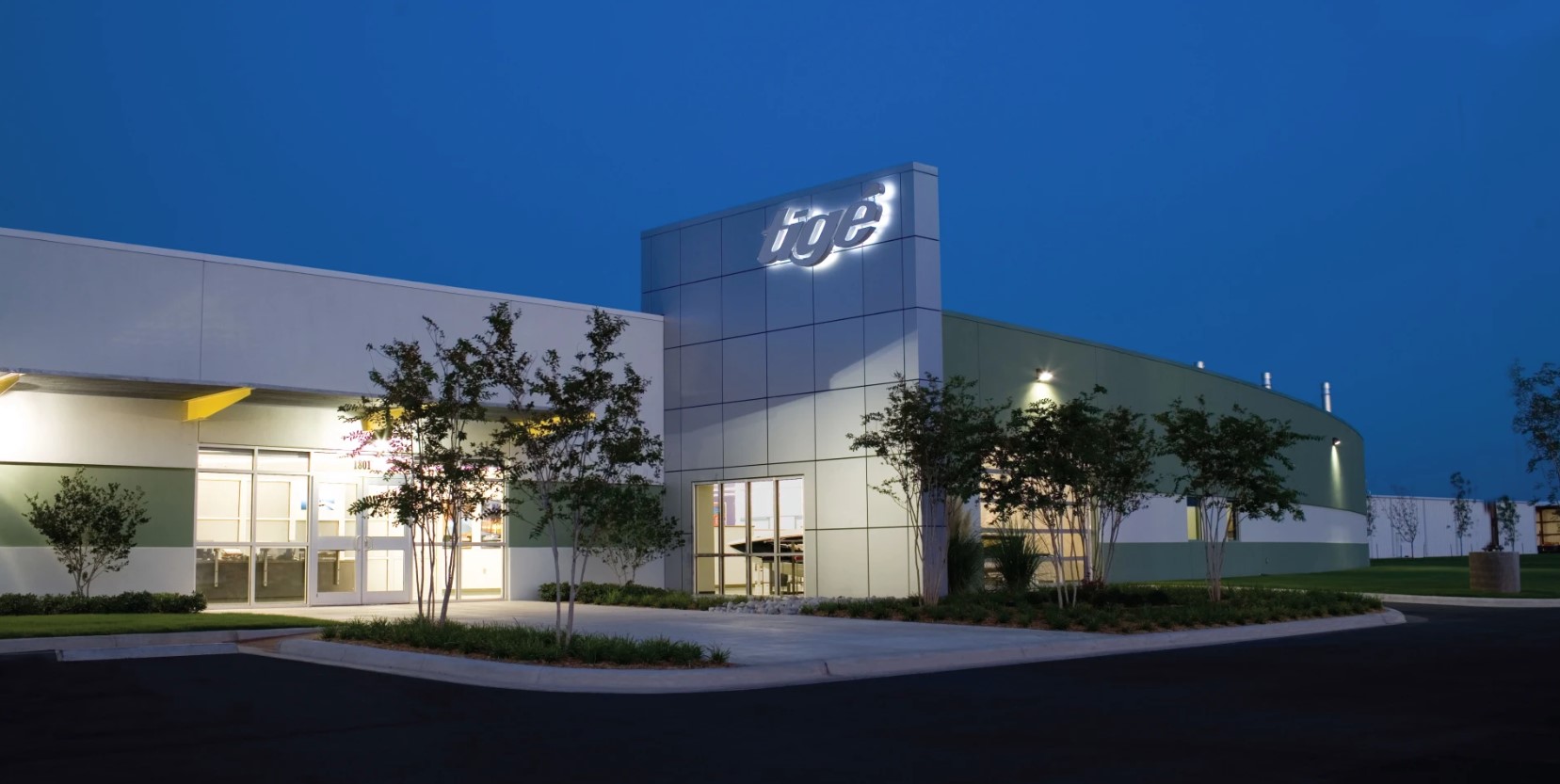 Tigé boats are built in Abilene, Texas. Factory tours are encouraged and can be arranged by calling 325-676-7777.

Charlie Pigeon founded Tigé in 1991, still owns it and works as CEO for the company. The R Series consists of three models, the R23 being the largest in the entry-level line. 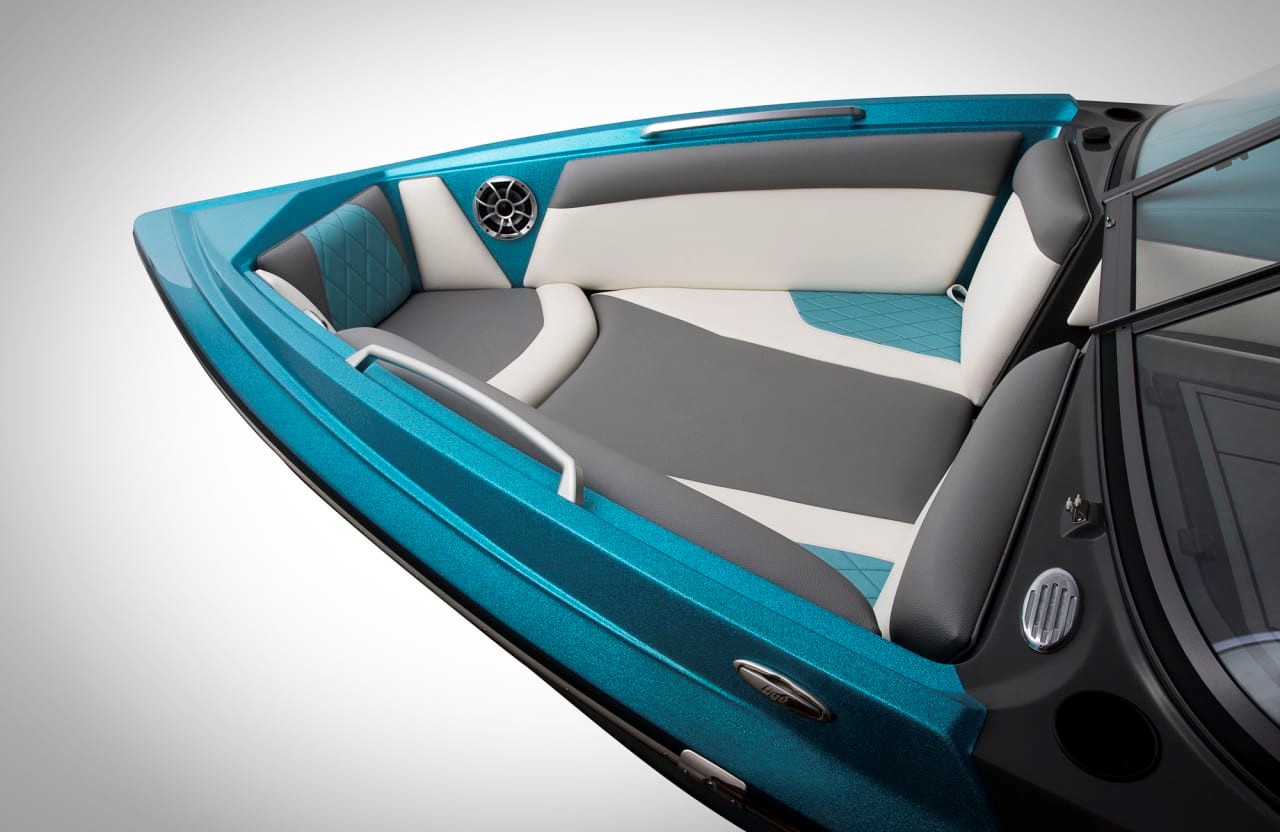 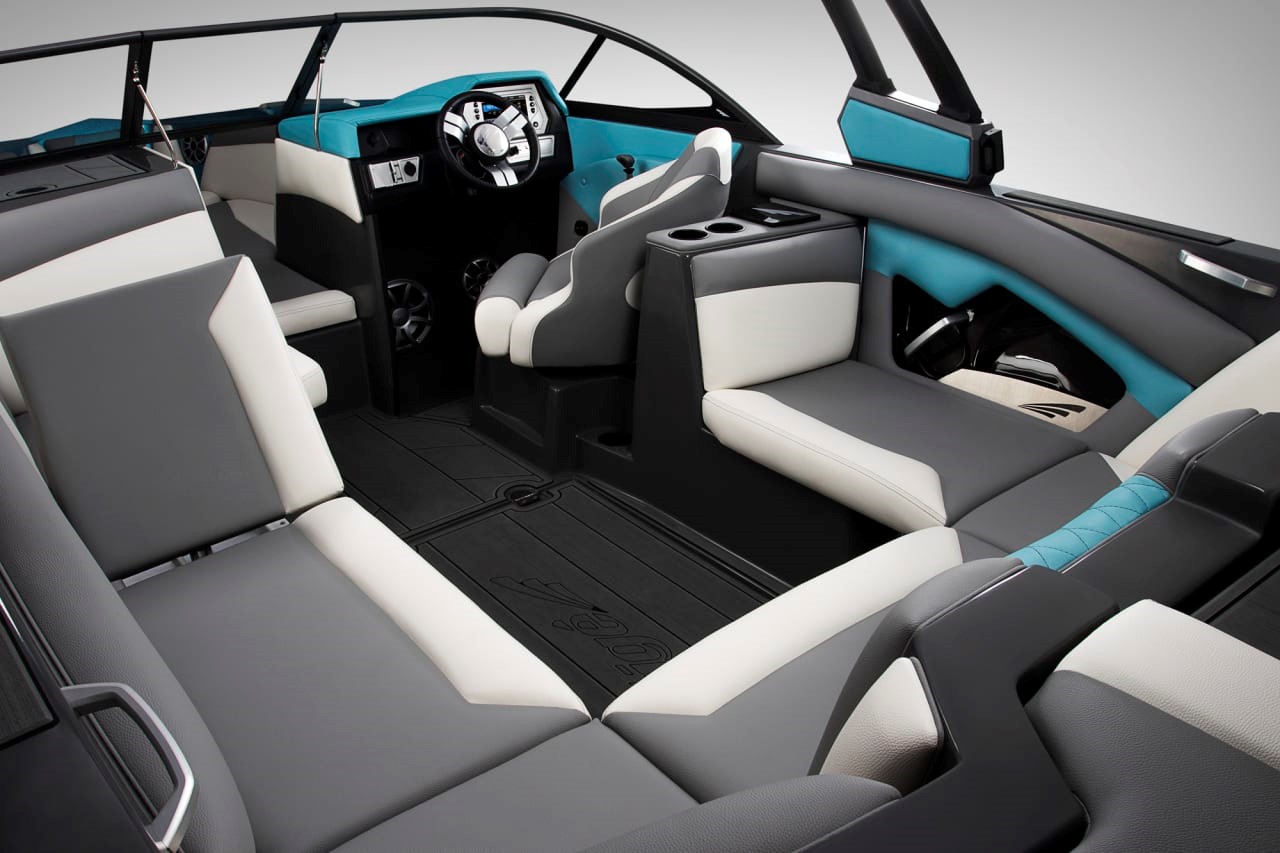 The Aergo helm chair includes a flip-up bolster. The portside seat hinges up to create a recliner seatback. 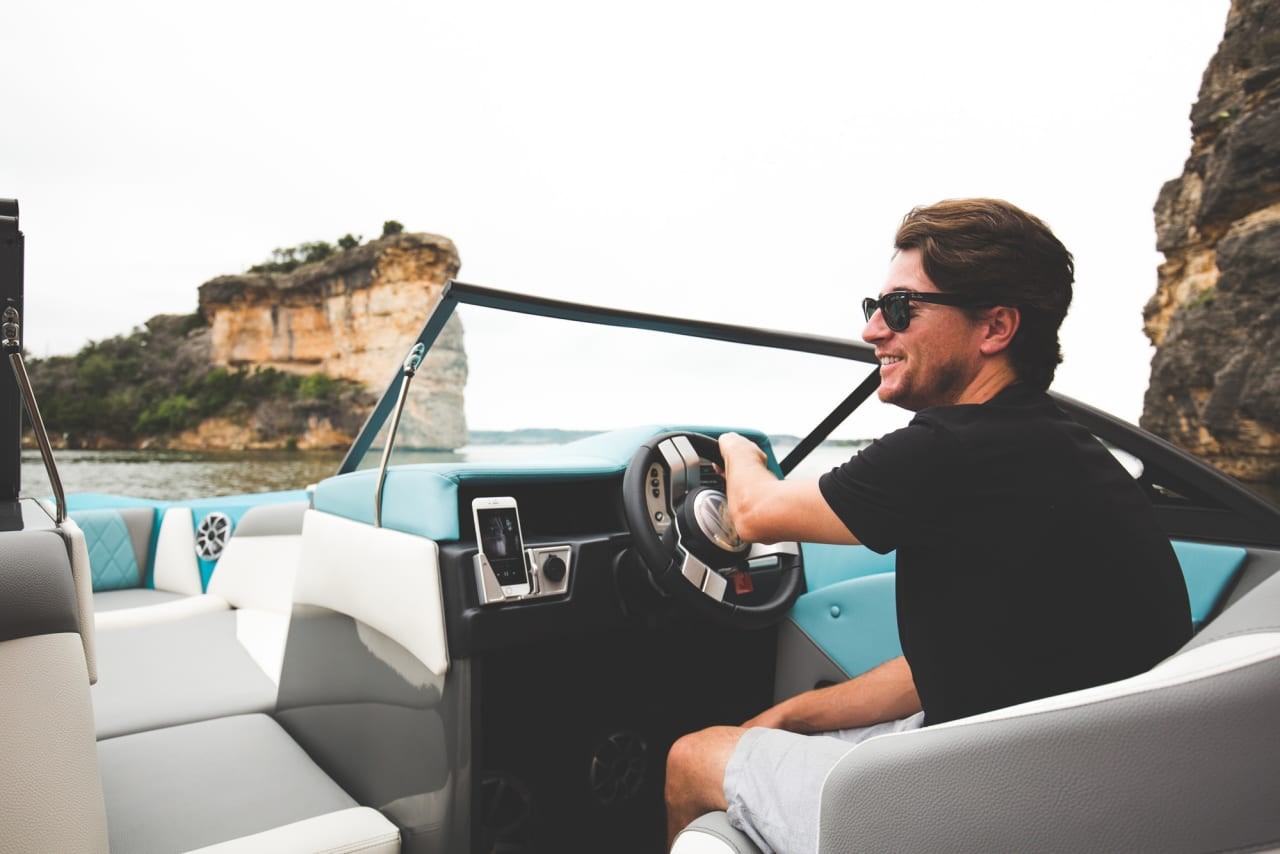 The helm has a phone cradle with built-in charger. Note the filler pad between the consoles which covers a standard cooler.

The helm is simplified by the single 11” CLEAR touchscreen from which pretty much all functions can be accessed.

Zero Off GPS cruise control is standard equipment. It is easy to use for recreational helmsman and gives precise and immediate response for world-class competitors.

The Bluetooth-enabled stereo system, also controlled from the CLEAR screen, consists of six Wetsounds cockpit speakers, a subwoofer and 10” tower speakers. An automatic volume control can be turned on so when the engine revs, the sound level increases and when the throttle is pulled back, the sound automatically lowers. 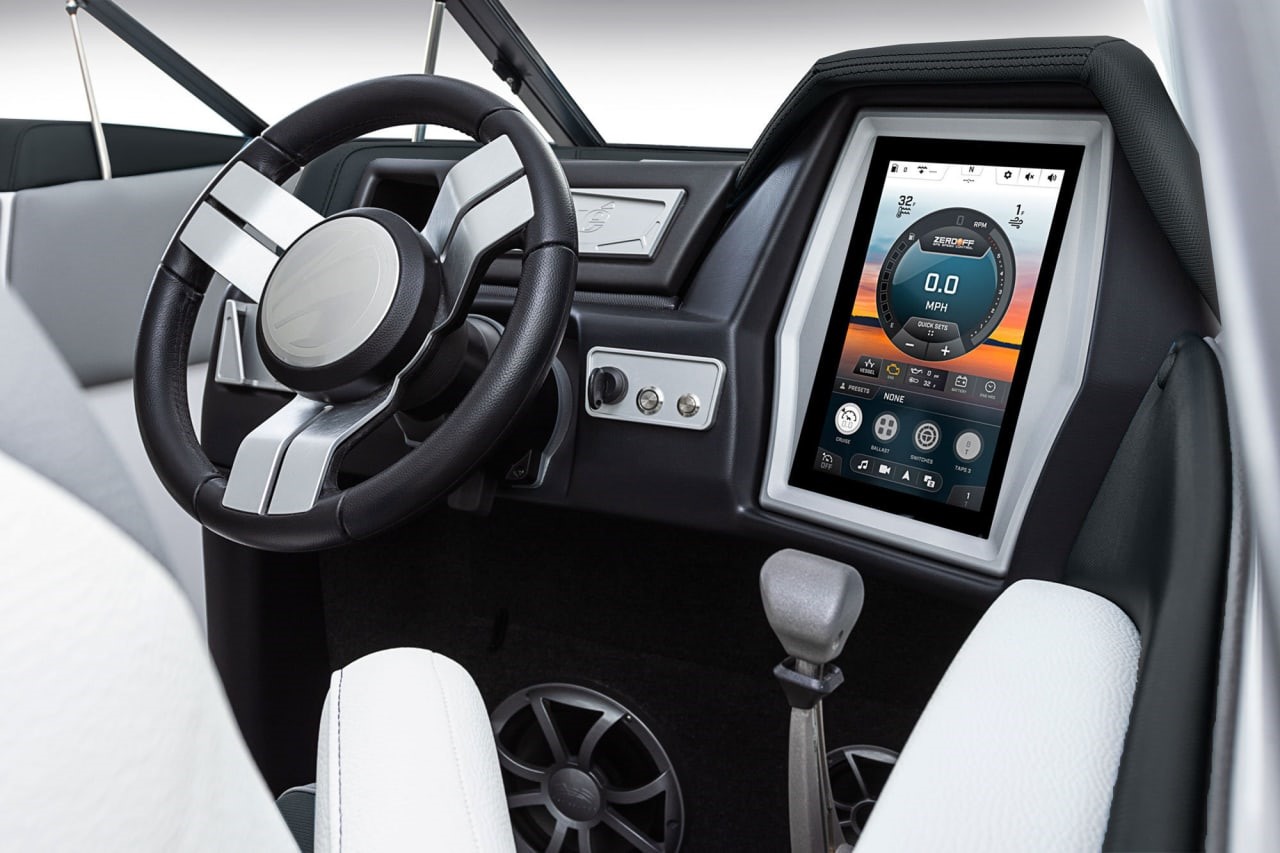 The 11" (27.94 cm) CLEAR touchscreen replaces most of the buttons and gauges on the dash as it controls trim, ballast, music, lighting, Go Pro integration, the rearview camera, engine data, and the automated GO System. 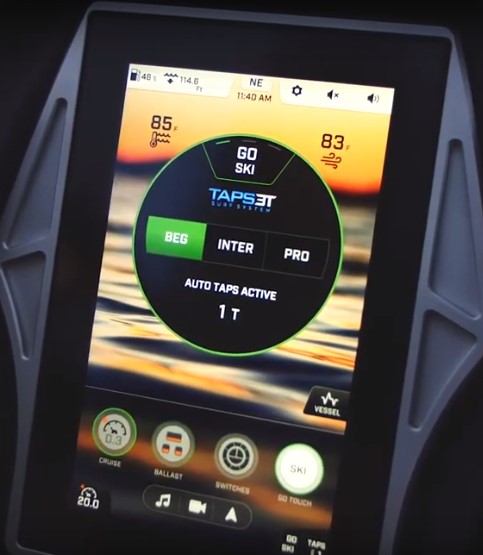 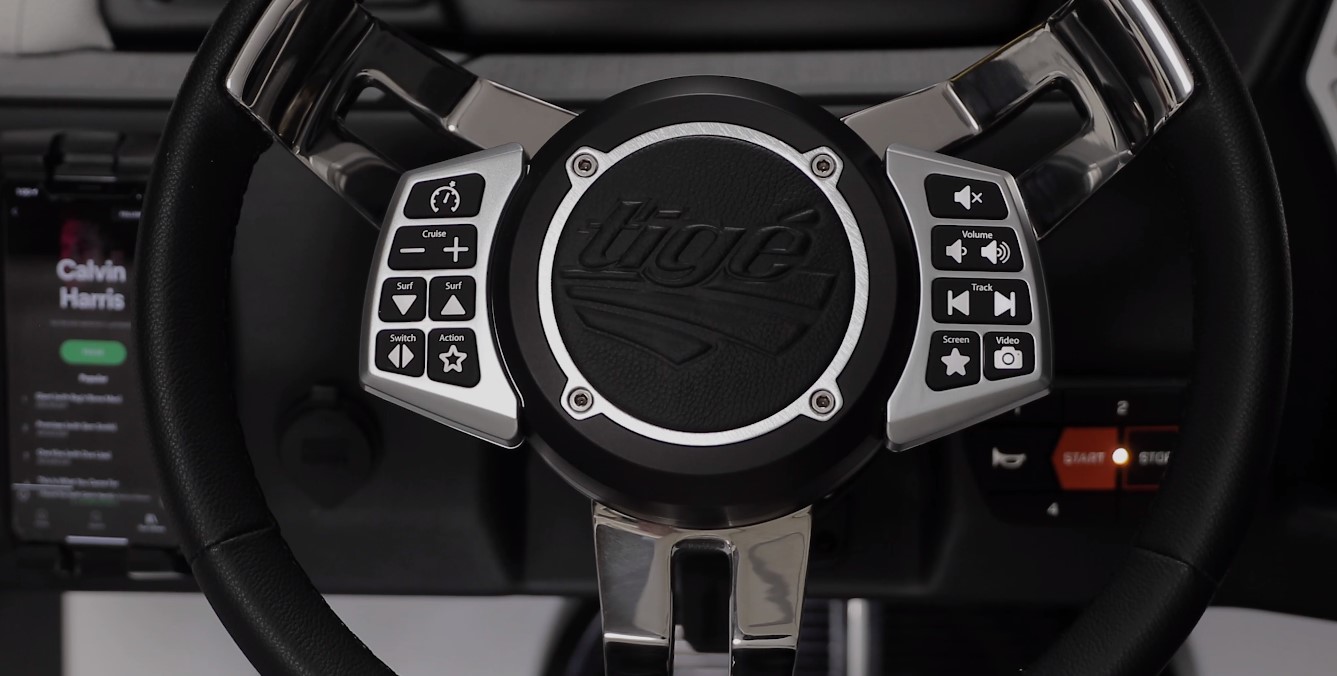 The Isotta smart wheel with handy controls is an option.

The R23’s cockpit has U-shaped edge-to-edge seating for passengers to socialize in almost any direction or view the action behind the boat.

The R23 color schemes and upholstery choices are extensive. 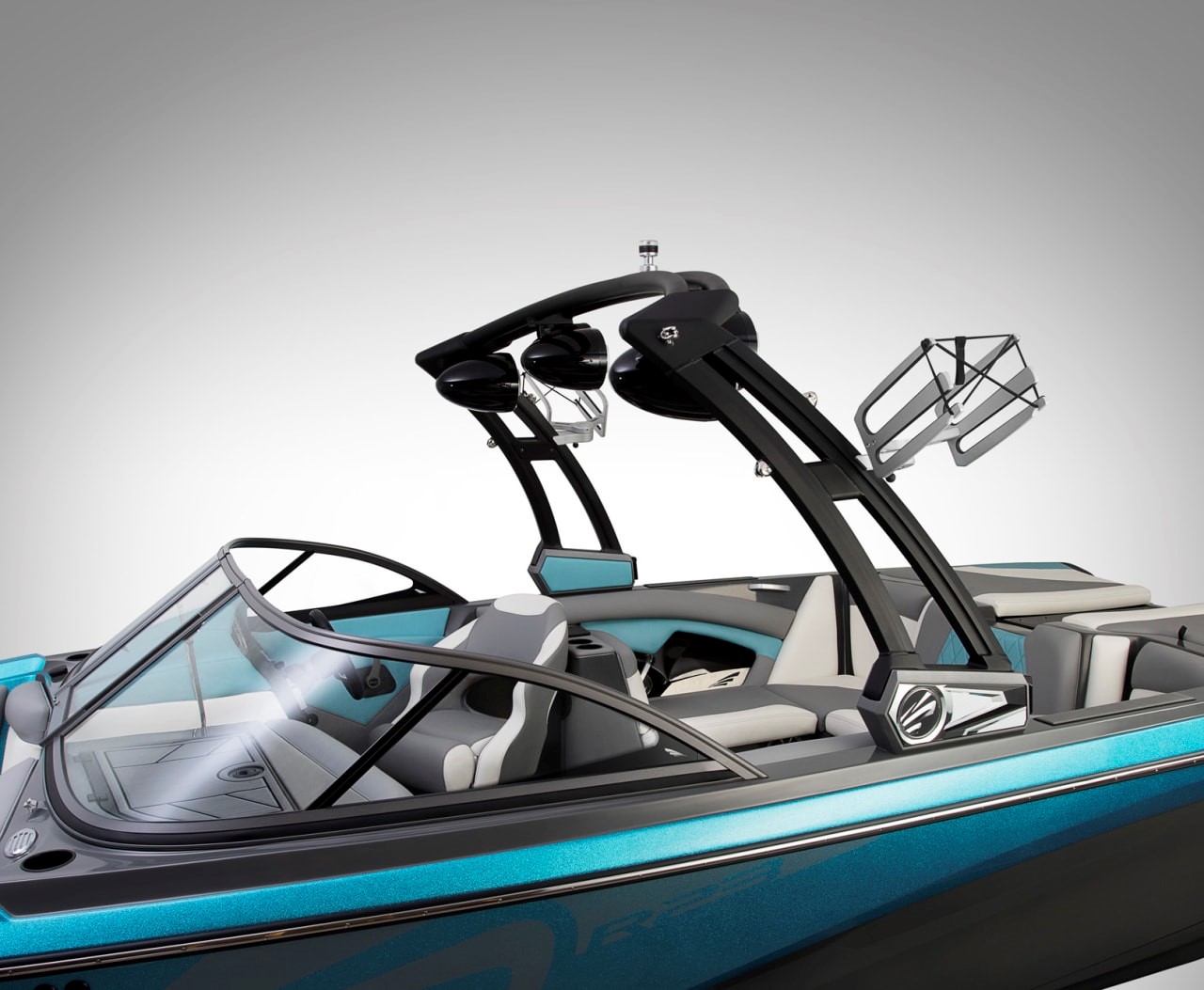 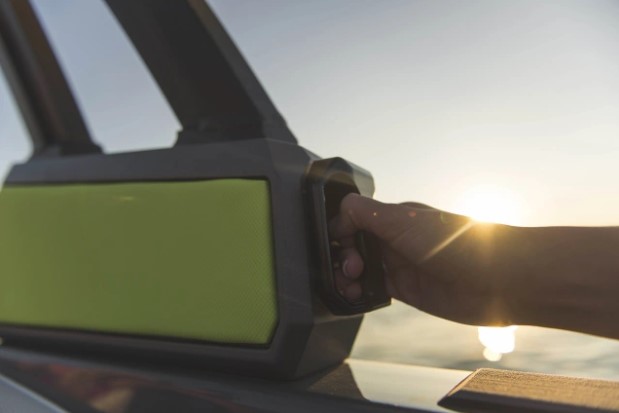 The Alpha M2 tower folds for transport by pulling on this release handle. 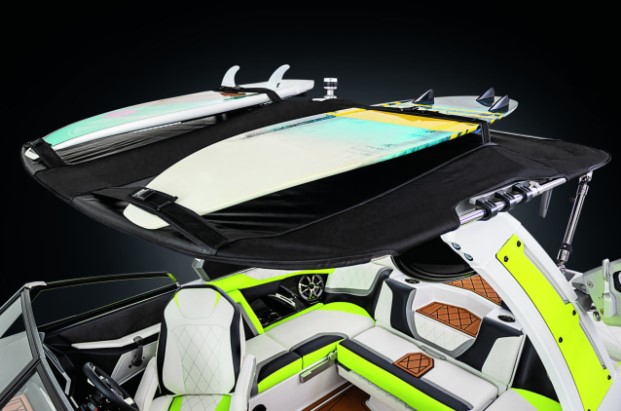 A walkthrough leads from the cockpit over the engine box to the transom.

Cushions on either side of the walkthrough provide for a spot to lounge in the sun when the boat is not underway. An intermediate step leads to the swim platform. 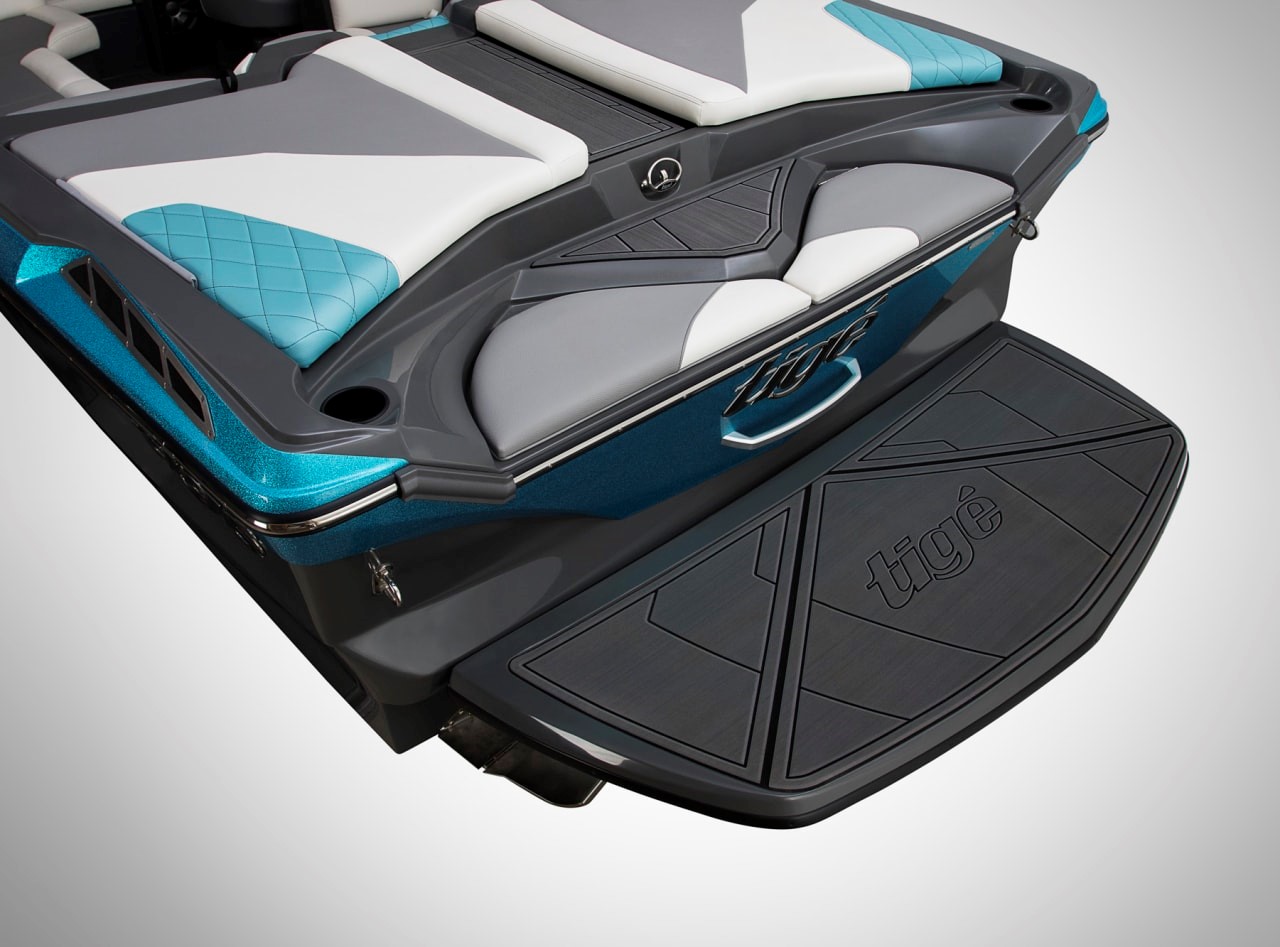 The small seat pads on the step-down have storage space below them. Note the tow hook centered just above them. 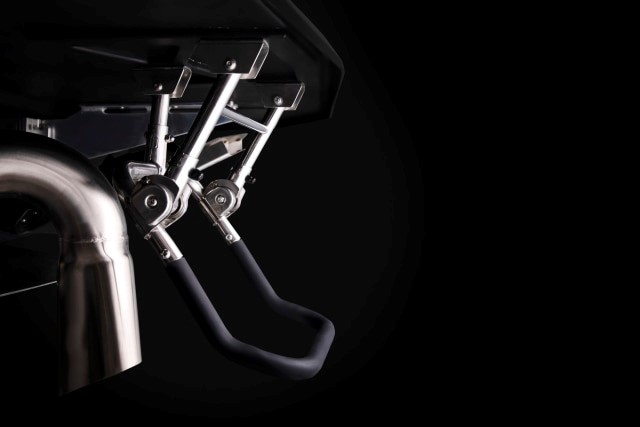 Here’s a handy optional accessory - a spring-loaded swim ladder. After stepping off, it retracts automatically back under the swim platform. 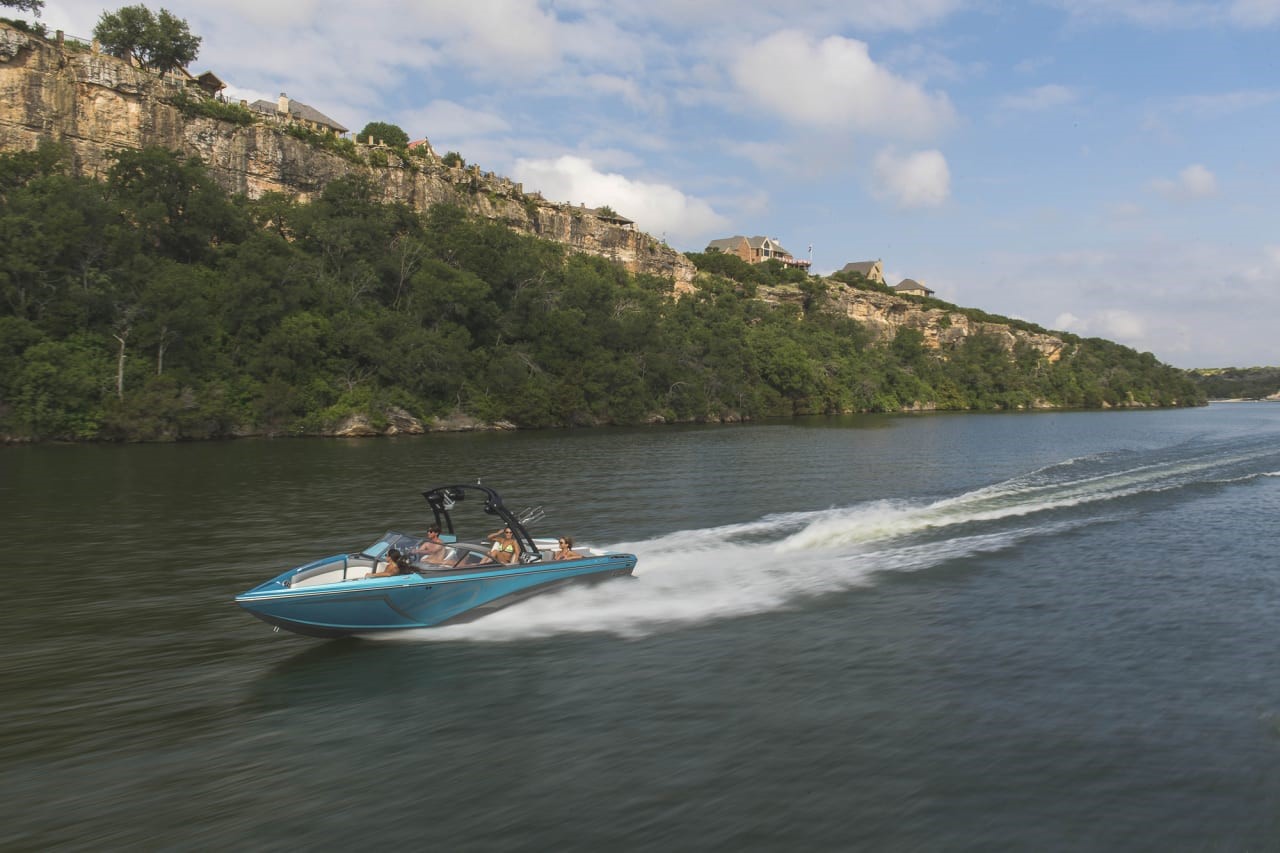 Even when propped for slow speed tow sports, the R23 can achieve running speeds of 36 mph with the base engine, according to Tigé dealers.

BoatTEST has not tested the Tigé R23 at the time of this report. 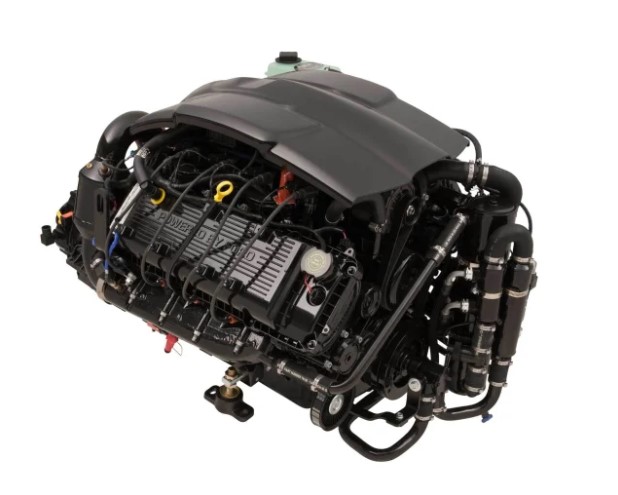 Color options are considered infinite and include metal flake. 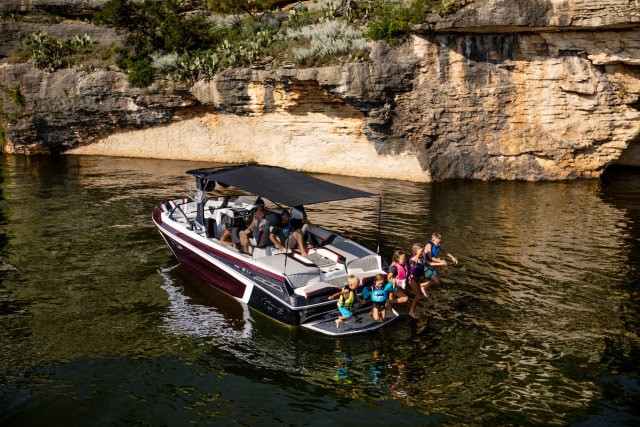 An optional cove cover extends shade from the tower over the aft section of the boat. 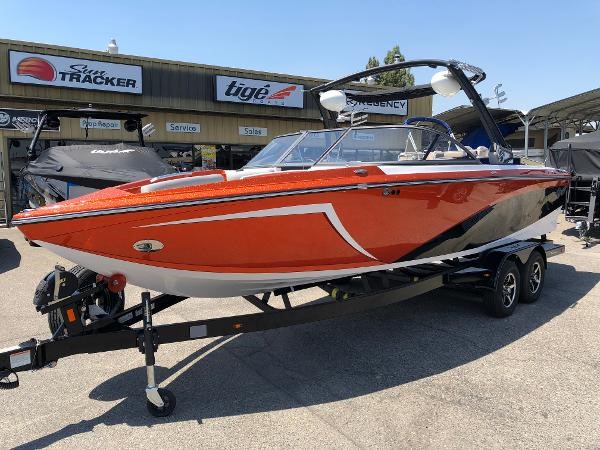 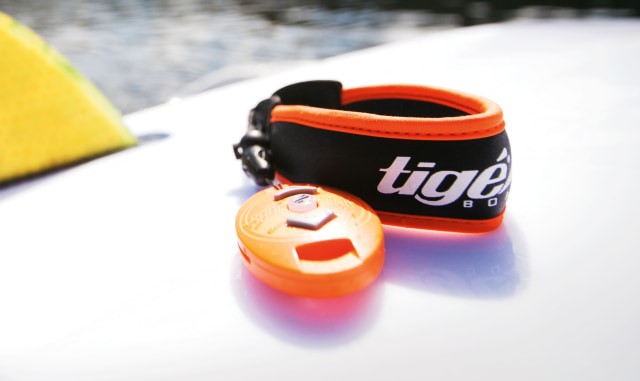 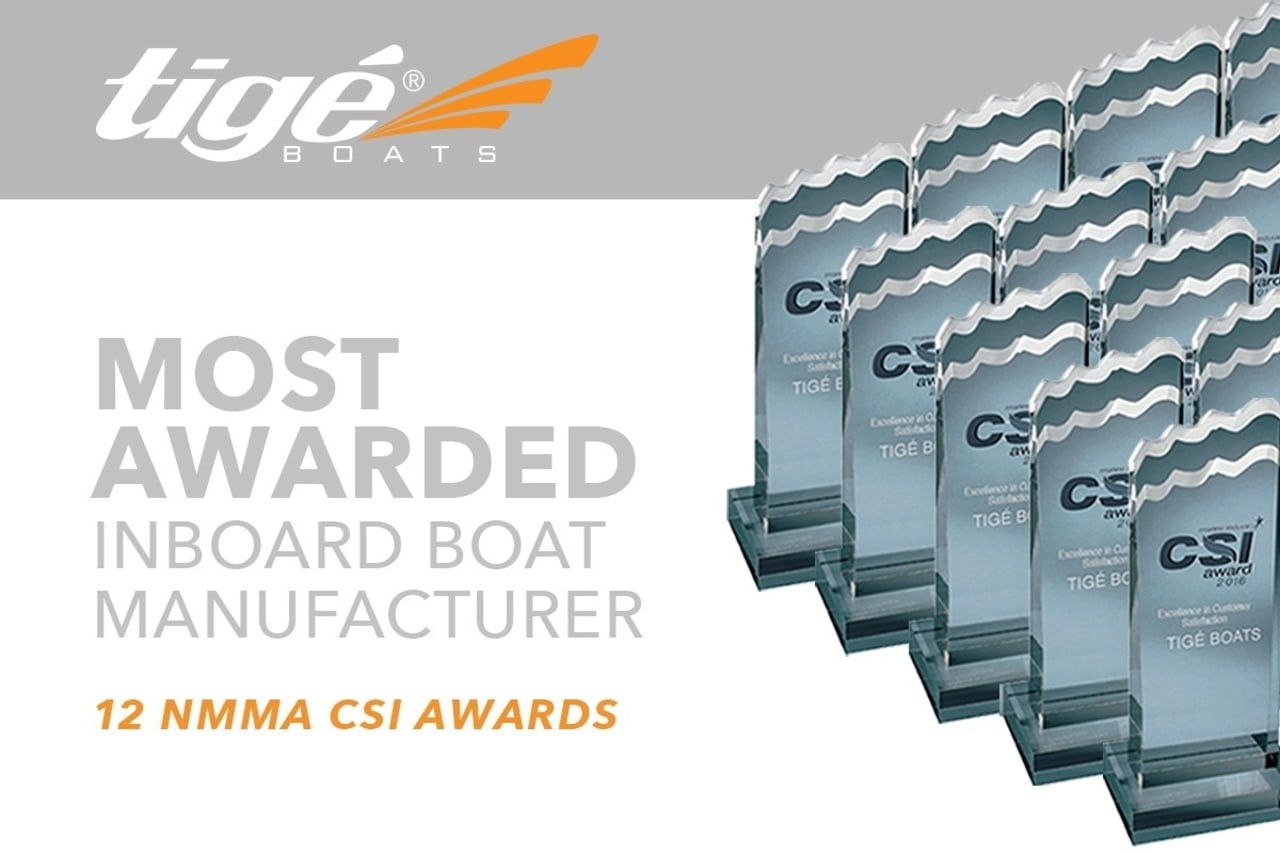 Actually, the count is now 14 CSI awards, which says a lot. The transferable lifetime hull warranty and 5-year equipment warranty show a commitment to customer satisfaction. 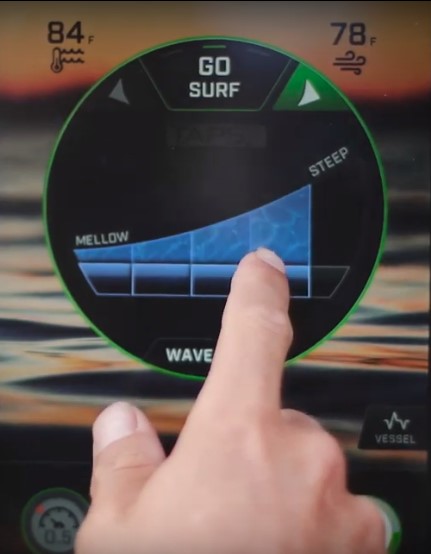 Selecting wave height on the GO system is simple. The complicated combination of ride attitude, ballast control, and tab control have been calculated so that all the operator has to do is touch the desired result.

The GO system is the major change in the R23 for 2020. When combined with the third generation TAPS 3T tab control, cruise control, and the ballast system it simplifies setup. The development of these systems along with the CLEAR touchscreen and hull patents shows the continued push by Tigé to innovate and provide value for the customer. 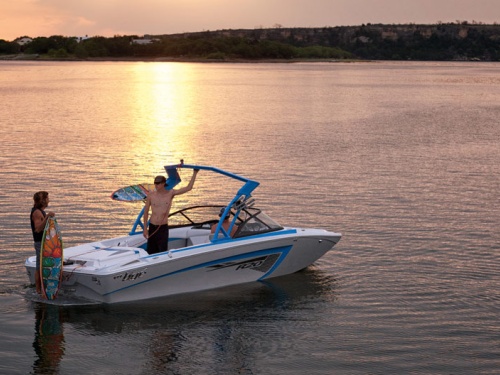 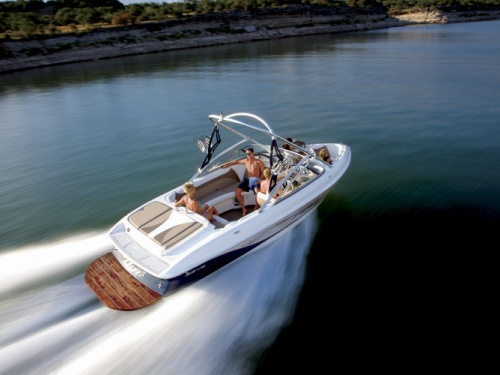 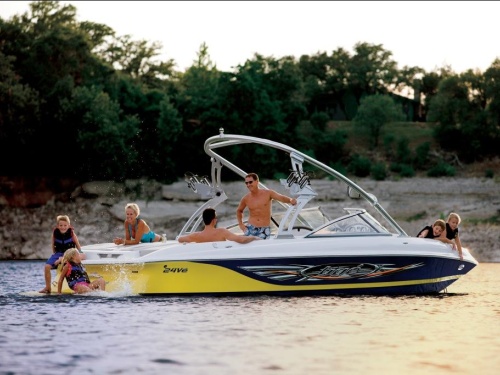 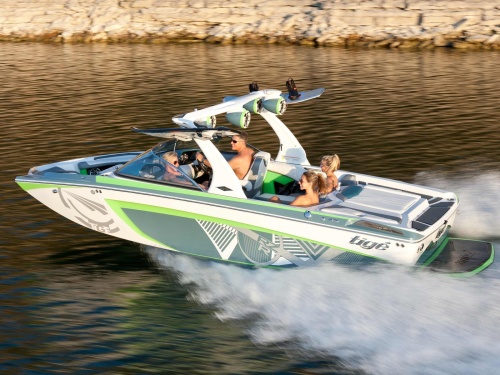