The 30 Surf is the biggest boat in Chaparral Boats’ wakesports towing series of boats. She’s available with a forward-facing sterndrive from MerCruiser or Volvo Penta up to 430-hp, and she comes with ballast and wake-shaping systems. Her interior layout is that of a luxury bowrider. 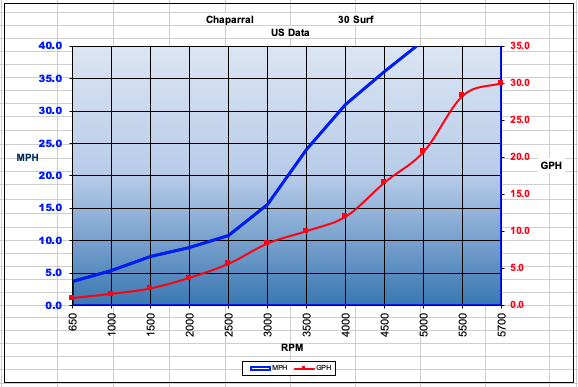 The Chaparral 30 Surf is designed to combine the comfort and amenities of a high-end bowrider with a forward-facing sterndrive, a ballast system and wake-shaping equipment to create a wakesurfing boat that will appeal to large families or even two families that like to boat and surf together. Because she’s 30’2” (9.19 m) long with a 9’ (2.74 m) beam, she’s yacht rated for passenger capacity. Unlike an inboard-powered boat, the trim-ability of the stern drive makes the 30 Surf easier to drive for a boater used to that type of propulsion system. She’s also bigger than anything offered by the traditional towboat manufacturers.

Surfing. Chaparral licenses Malibu Boats’ wake-shaping Surf Gates. They’re appendages that mount on each side of the stern, and they are used to shape the wakes instead of having to move passengers around in the cockpit. A soft bag in the ski locker can hold 800 lbs. (362.87 kg) of water ballast. The 30 Surf also comes standard with an EFX Folding Arch Tower. Of the two screens at the helm, the one to the right controls the surf gates and the ballast. When the tower is lowered, which happens easily, bridge clearance is reduced from 8’ (2.44 m) to 6’1” (1.85 m) and the driver can still stand at the helm to run the boat.

The Helm. In the starboard console are twin touchscreens. The Simrad unit on the left can be configured to display navigational information or engine monitoring. The Medallion II screen to the right controls the wakes including the size and shape. The entire console top is finished in black upholstery that gives the helm an upscale feel. Accessory switches that illuminate when powered on are on each side of the tilt steering wheel. The stereo remote is down low on the left side and to the right is a cellphone holder. Circuit breakers are positioned beneath the dash panel, which saves space and protects them against the elements. The captain and a companion travel in high-backed bucket seats that swivel and adjust fore and aft.

The Port Console. Across from the helm, the port console has a locking glove box in the usual location, and to port, there is a recessed armrest with easy access to USB and 12-volt charging ports. Grab the stainless-steel handle about halfway down on the left-hand side and the entire console opens into the passageway to the bow. Inside, a sink with pull-up shower an opening portal and a porta-pottie come standard. Owners can update to an electric porcelain toilet with pump-out. Overall, headroom in the compartment is 47” (119.38 cm) and there’s 33” (83.82 cm) of seated space.

The Bow. The center section of the stainless-steel-framed tempered glass windshield opens for easy passage to the 30 Surf’s bow. Below, an air dam can also be closed to seal off the bow area. A hatch in the starboard console opens to provide access to storage and to the helm rigging. Up front, the seats are set up for passengers to travel facing forward with backrests that wrap all the way around. Armrests fold up on each side and outboard are cupholders with speakers just ahead in the gunwales. A fiberglass table installs in a bracket and can be upgraded to teak. There are rails on the deck on each side and the bottom cushions are hinged and pick up to access molded lockers. Under the center cushion in the bow is an insulated cooler. Forward, the standard power windlass includes 270’ (82.30 m) of rope, 15’ (4.57 m) of chain, an appropriately sized anchor and footswitches on the foredeck plus another one at the helm.

The Cockpit. Working our way back into the 30 Surf’s cockpit, abaft the port bucket seat, an L-shaped lounge wraps aft to the passageway to the stern. To starboard is a lounge that can seat two to three. There are stereo speakers, grabrails and cupholders in the gunwales on each side and the same table that can secure in the bow can be clicked in place in the cockpit. Storage is beneath all the bottom cushions and there’s a spot to stash a 36-quart (34.07-L) cooler. Push a button at the helm and the entire seat structure raises on a power ram to provide access to the engine.

The Stern. New on the 30 Surf are the convertible backrests for the stern lounge. Move the front one forward and slide the rear one all the way aft to create triple-wide chaise-style lounge. A recessed transom door closes off the starboard-side passageway. Aft, Chaparral’s exclusive Infinity Power Step swim platform folds down beneath the water’s surface to facilitate reboarding for people or pets. It’s finished in SeaDek mat in slate or dune colors.

In acceleration tests, the grip of the Forward Drive thrust the 30 Surf on plane in just 4.5 seconds. She ran to 20 mph in 7.1 seconds and continued through 30 in 11.7 seconds. When we eased back on the throttle, she stayed on plane at 12.2 mph.

Handling. Having the props on the front of the drive gives them maximum bite in clean, dense water. This means that the 30 Surf will carve tighter turns than a similarly sized bowrider with a conventional stern drive. It’s neither a pro nor con, just something a driver should be aware of. Conditions on our test day were flat, so the only rough-water ride we could experience was crossing our photo boat’s wakes and the 30 Surf cut through without missing a beat. Around the docks, she feels like a conventional sterndrive, which gives the 30 Surf an advantage over inboard-powered boats.

Options To Consider (not mentioned in article)

The 30 Surf is the largest wakesports-dedicated boat available, regardless of the propulsion system, but it’s not so large that it’s driving people away. Dealers can’t keep them in stock. The Malibu Surf Gate and the ballast creates wakes that are good enough for the majority of surfers. The space and luxury that come in what is basically a 30’ bowrider will probably appeal to buyers who want a high-end watersports boat. 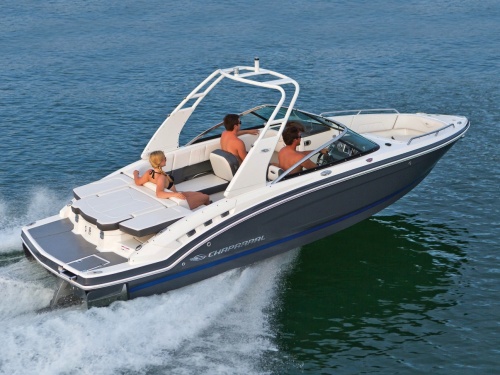 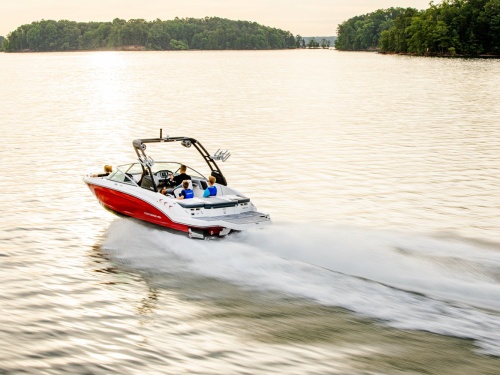 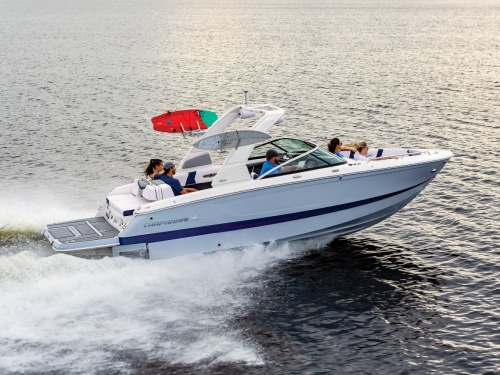 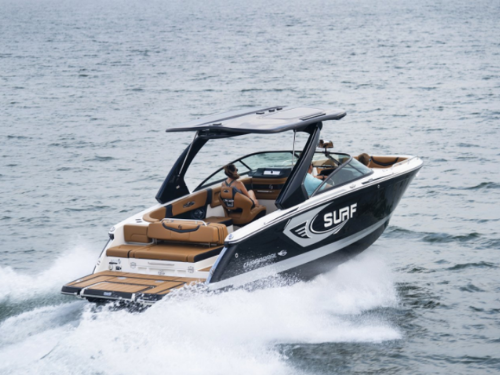