The all new 50 GLS is now the flagship of Cruisers Yachts GLS lineup of luxury bowriders.  She sleeps four comfortably in two private cabins.  Drop down balconies create even more entertaining space than her massive main deck alone provides. 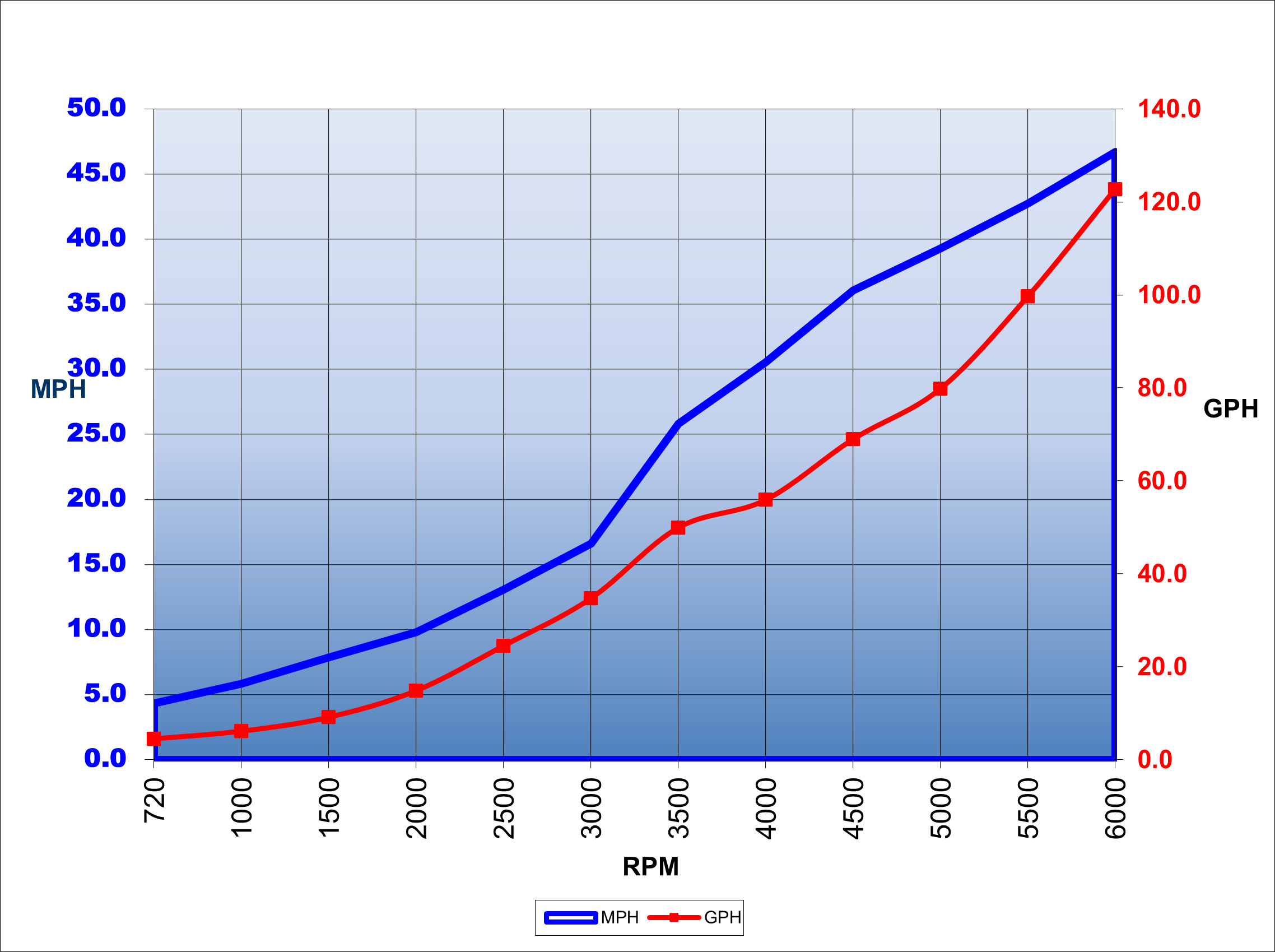 The all new 50 GLS is now the flagship of Cruisers Yachts GLS lineup of luxury bowriders.  She sleeps four comfortably in two private cabins.  Drop down balconies create even more entertaining space than her massive main deck alone provides.

The 50 GLS is a luxury entertainment platform that offers expanded social zones on deck and overnight capabilities below deck.  She’s a large bowrider for extended days on the water, an able express cruiser for overnighting, a platform to launch watersports, and an entertainment venue for everything from swim and cocktail parties to BBQ outings and moonlight cruises. In fact, she has been carefully designed to do most anything an active family wants to do, both close to home as well as when island hopping.

·      Dual L-shaped lounges with walkthrough in between

The 50 GLS is a nice handling boat, and she's quite responsive to the helm. There are four turns from lock to lock, so you don't have to really put a lot of effort into making turns. When you do put her into hard turn, she's got a maximum heel of 12-degrees, which is not much at all.

It's got good power with the three, 600-hp engines so there's no problem with acceleration. I didn't find about to come up excessively, so I never lost sight of the horizon.  Once she gets up on plane, the engines kick into a second gear and then she's at her cruise speed. If you push it more than the cruise speed, you're going to find that the waves will start hitting the boat and giving you a little opposition. Back it down to cruise speed and it's a lot more comfortable ride. There's just no need to push this yacht. It's not made for speed, it's made for cruising, so cruise along.

The center of the cockpit deck is also the center of the action onboard.  It starts with a bench seat across the stern with 17” (43.18 cm) high gates to both sides.  Two pedestal tables are in front of the bench, and they’re finished in high gloss.  Ahead are two L-shaped lounges with a walkthrough between them.  The lounge seats are outboard of an aft-facing seat in both instances.  The pedestals tables from the aft bench can be relocated to these lounges.  Storage is under all these cockpit seats.

More importantly is the ability to expand on the social area.  Switches activate the mechanisms that bring down beach doors to port and starboard.  An extendable awning comes out from the trailing edge of the hardtop a full 9’ (2.74m).

Around the aft side of the aft bench there’s a grilling station.  It starts with a lot of available counterspace thanks to covers that are in place.  Remove those covers and two electric grills and a single basin sink are revealed.  There are cutoff switches ensuring that power turns off to the grills when covers are in place.  And we’d like to see either dedicated storage for these covers or perhaps have them hinged so they don’t need storage.

Swim platforms are to the stern, and they come out to just even with the front of the outboards.  In the center there’s a platform that extends 2’9” (.84m) from the transom and it lifts to facilitate tilting the engines out of the water.  Cleats are to the trailing edge so no worries about tripping, and a four-step reboarding ladder extends from the outboard side of the port platform.

Just ahead of the port cockpit lounge, there’s a module that includes a Corian counter with four stainless-steel beverage holders, two to both outboard sides of a recessed area that includes three inductive phone chargers.  Underneath there’s pull-out bottle storage.

That module serves as an ad-hoc division between the cockpit and the dinette/galley areas.  The dinette is to port and consists of an L-shaped sofa surrounding a gloss finished solid wood table on a fixed pedestal.  A pull-out drawer facilitates storage under the sofa.  All of this is on an 8” (22.32 cm) elevated platform.

The comfort level is something of note in this dinette.  Firstly, there’s Ultraleather upholstery with diamond patterned stitching to the backrests.  At the lumbar area there’s open space that is populated with air conditioning vents adding a remarkable level of comfort to a hot day.  And finally, the seatbacks are angles back in a semi-reclining position rather than simply upright.  It’s a noticeable feeling of comfort that’s felt the moment one sits down.

The galley is across from the dinette and having it on the main deck keeps it near the main social zones.  It’s L-shaped with plenty of Corian counter space.  A glass divider is at the aft edge protecting the seat just behind.  Features include a corner mounted sink.  A single refrigerator is standard, a second one is optional.  Storage is to the aft section.  Above a 55” (139.70 cm) flat screen rises on an electric lift and there are air conditioning vents just below.  Just forward, and under the observer’s seat, is an icemaker.

All of this central area is under the protection of the hardtop 7’1” (2.20m) off the deck.  It’s rather elaborately fabricated with compound curves, an upholstered section with LED lighting and speakers in all four corners.  While it can be closed off in Isinglass, in the open version it really lends itself to blending the inside with the outside.  In addition to having the aft section fully open, we can also open the electrically actuated side windows, the forward walkthrough windshield and air dam and finally the massive sunroof.

The walkthrough to the bow is to the starboard side and where others may put a massive window that is hinged to open and lie flush to the windshield, we find these awkward to handle, especially when underway.  Cruisers has a much better solution.  They’ve made the same large walkthrough windshield slide over to the main windshield. It’s made even better by having the slide be electrically actuated.  Below the sliding window is an air dam and this is hinged and much easier to deploy.  To the sides of the walkthrough there’s storage in bulwarks compartments.  Walkthrough space is 25” (63.50 cm) wide and the bulwarks come up to 40” (101.60 cm) for safety.

Seating is wraparound and begins with four-across forward-facing seats, all with flip armrests.  Seating continues along the starboard side and across the bow.  Stainless-steel rails run along the caprails.  A table rises from the deck on an electric actuator to convert the bow into an al fresco dining area.  With the table at “cushion height” a filler will turn the bow into a large sunpad.

As for fit and finish, all upholstery is Ultraleather, diamond stitching with UV resistant Tenera thread and there are separate headrests for the aft seats.  Storage is under the side and forward seats, and the forward seat is also fitted with an electric chill plate. Additional storage is in the deck.   Stanchions have dedicated storage in the walkthrough bulwarks, and they’re used to support a Mediterranean sunshade.  With that in place, and the extendable awning at the stern, the entire length of the boat can be protected from the sun.

We access the lower deck via a sliding door alongside the helm.  A bug screen is conveniently fitted for maintaining air flow on those warm nights.

If the main deck features are focused on spending time during the day, the cabin is dedicated to spending nights.  There are two sleeping areas, one forward and one aft, with an open space between occupied to port by a modest night galley and to starboard by the head.  Headroom in the center area is 6’8” (2.03m).  High gloss finished Mocha Oak add to the upscale features.  All doors are gasketed to prevent rattling while underway and they close with just a soft touch.

The galley is to port at the bottom of the stairs.  It includes open Corian counter space, a microwave and refrigeration.  Other than two storage drawers that’s about it.  This design scheme basically makes this a spot for throwing together the late-night snack or grabbing a beverage in the middle of the night.  As for cooking, that’s all done on deck.

The head is fully featured with a Vacu-flush toilet, a sink, storage above and below and an opening portlight.  Most surprising is the addition of a separate shower stall.  Often, boats in this class will have a wet-head.  Creating the space for a roomy head is one of the many advantages of having the galley located on the main deck.

The master is located forward and accessed through a pair of French doors.  There’s an island berth with steps to both sides.  Headroom is 6’7” (2.01m) with 4’4” (1.32m) over the berth.  The entire room is bathed in natural light thanks to triple skylights across the overhead and another window joining to the port side that includes an opening portlight.

There are the usual storage solutions with cabinets to the sides, drawers to the front as well as under the berth and a large handing locker.  A 32” (81.28 cm) TV is to the bulkhead adjacent to the entry.  A covered cabinet under the TV houses a JL Audio stereo and the climate control panel.

The aft cabin has a measure of versatility to it in that it can be used as twin berths or a larger single berth.  It all depends on whether filler cushions are added to the center of the twins or not.  A 32” (81.28 cm) TV is to the starboard bulkhead.  Headroom is 3’1” (.94m).

Since the 50 GLS has outboard power, what would otherwise be the engine room is now made into a mechanical compartment.  Inside we find the 15 kW Kohler generator, the SeaKeeper 6 gyro stabilizer, raw water strainers, batteries, all of our electrical connection and the cord reel for the shore power. It's all in one convenient location and everything is labeled properly.

The helm starts with a raised panel with three 18” (45.72 cm) displays on it.  There's a padded dash forward and to the side that gives a nice contrast to the dark panel that the screens are mounted to.  Below and to the left are the electrical switches, the SeaKeeper control, VHF, spotlight control and bow thruster. Ignitions are over to the right-hand side of the steering wheel, which is mounted to a tilt base, and then the digital inter controls are over to the right along with the JPO joystick. Trim tabs are just behind, as is another beverage holder and an inductive phone charger.

The GLS line of boats brings large bowriders that are feature packed to the game.  Having one that is 52’4” (15.95m) long allows for loading it with even more creature comforts that make it the top of the lineup.  And load it they did.  This brings the on-the-water entertainment to new heights… and with the drop down balconies, new widths as well.