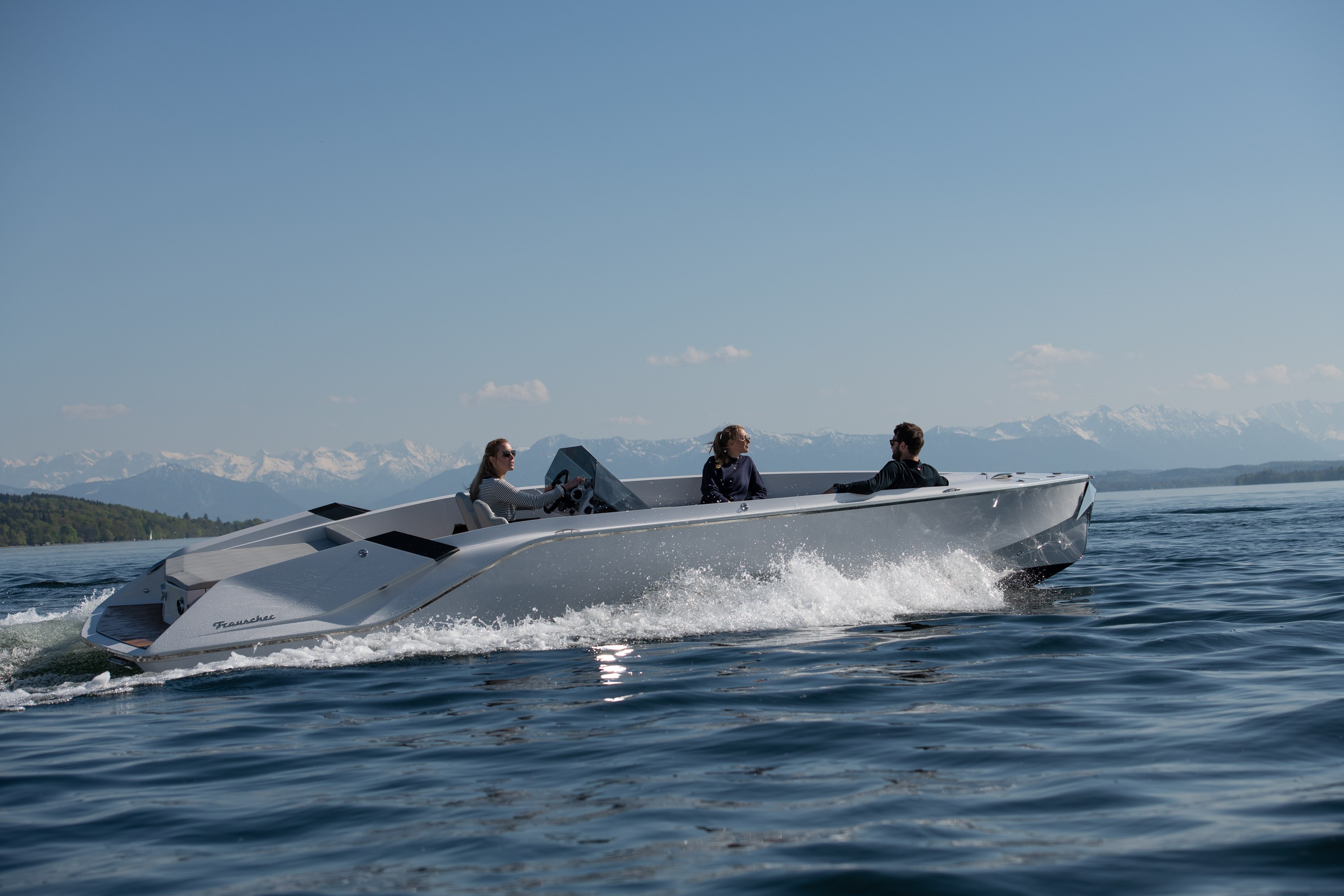 The futuristic design of the Frauscher Mirage 740 Air gives it a James Bond-esque appeal.

Austrian builder, Frauscher, has been building wooden hulls since 1927. Their aesthetics have evolved from classic woodies to sleek speedsters propelled by both internal combustion engines as well as by electric motors. The Mirage 740 Air is not new since the model was previously available with a Mercury 350-hp sterndrive, nor is it the company’s first electric model. However, the combination of this particular design with a new electric propulsion package by Germany’s Torqeedo debuted in May, 2019. 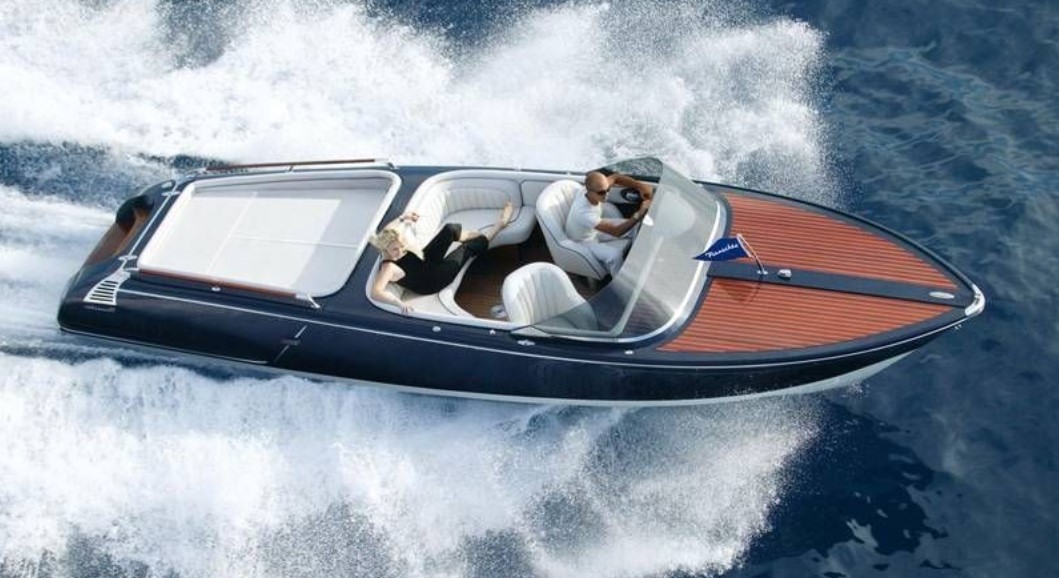 Classically-styled Frauscher boats have been famous all over Europe for being exquisitely-built wood boats with super-lux detailing and price tags to match.

The purpose of the Mirage 740 Air is two-fold: First, it is perfectly suited to lakes and inland waters where combustion engines aren’t allowed. Second, it’s also positioned as a superyacht tender that can carry six to and from shore and venture out from the mothership to explore. The vessel is intended to operate where it can be plugged in and recharged and the Mirage (which can be custom painted) is likely to impress guests with its minimalistic design and smooth ride. 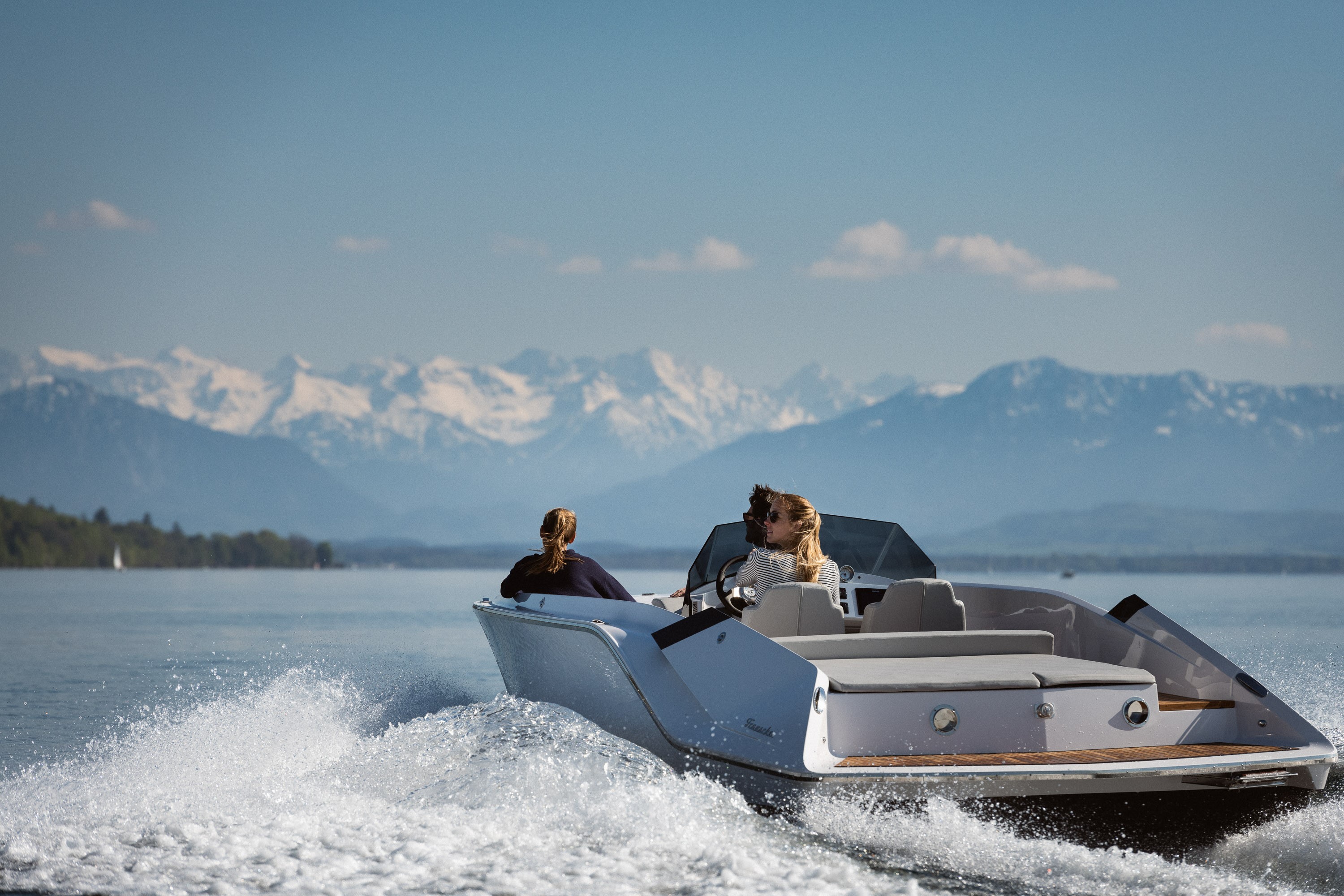 Torqeedo’s clean propulsion pack on the Mirage 740 has plenty of get-up-and-go.

The most unique feature of our test boat was Torqeedo’s Deep Blue system that combines a high-rpm 100 kW brushless inboard motor with twin BMW i3 Series, 40 kW batteries. The high-capacity lithium batteries are stacked one above the other in the engine compartment aft. 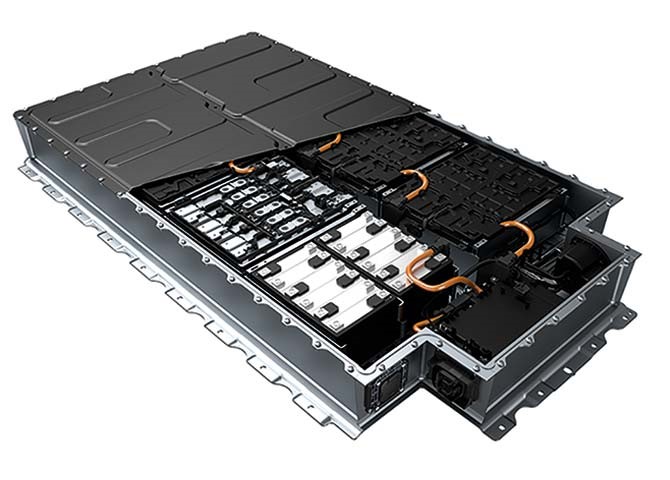 The engine compartment under the aft sunpad lifts electrically. It holds either a combustion engine or BMW batteries to power Torqeedo’s 100 kW motor.

Torqeedo adapts BMW’s i3 automotive batteries for marine use by adding a rugged damping frame to minimize shock, a venting system to channel gasses safely and waterproofing to IP67 standard. The new batteries tout a 31% increase in capacity (energy density) over the previous similarly-sized model. 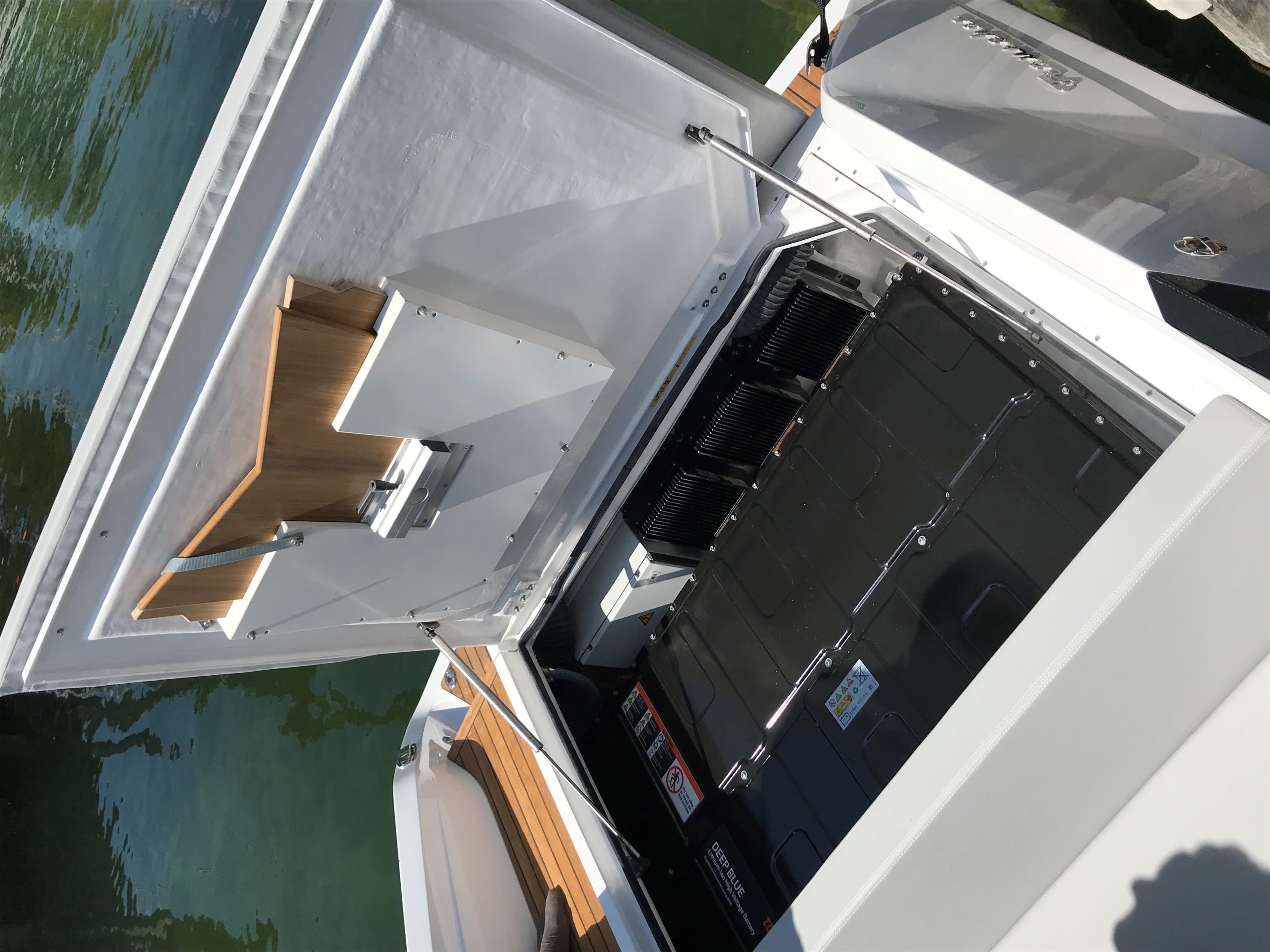 With a footprint roughly 5’ x 3’ x 6”, twin i3 batteries fit nicely into the exiting engine space.

The advanced technology packed into the i3 battery is impressive, starting with the prismatic cells. Because charging and discharging leads to battery cells expanding and collapsing, the cells must be assembled accurately in a robust frame so they can reach their expected long service life. Prismatic cell design allows for efficient cooling.

The design is compact and helps even out temperature distribution within the battery. Additional compressor cooling helps in climates with high ambient and water temperatures.

In the unlikely event of excess pressure developing in a cell, prismatic cells can release excess pressure through a valve. This is a safety advantage over foil-welded or pouch cells. The built-in pressure safety disc allows gases to escape and ensures the battery stays waterproof to IP 67 standard under normal operation.

The entire 360V pack weighs 613 pounds and its rugged design is ideal for boat applications that place high demands on shock resistance like Frauscher’s planing hull. 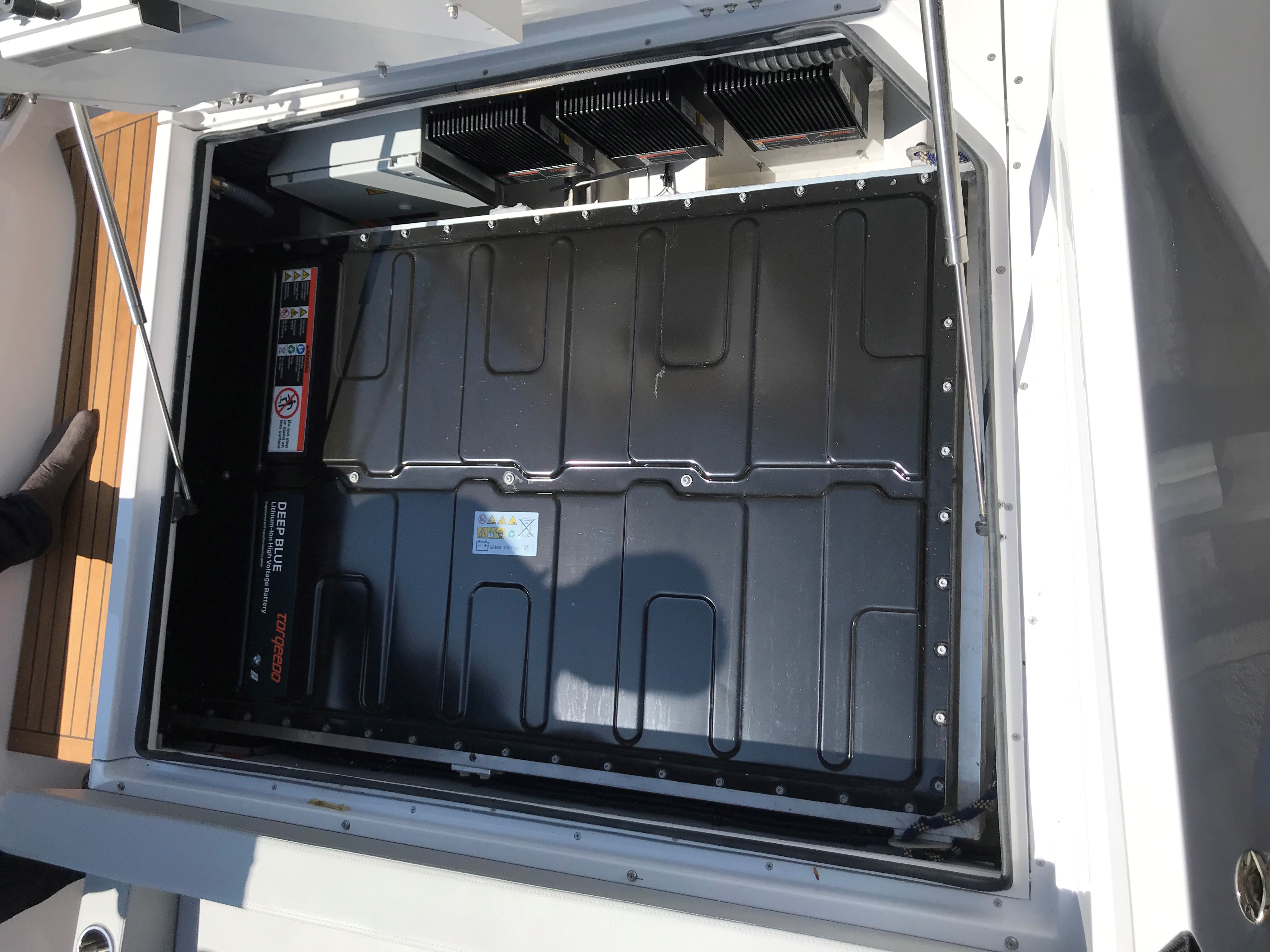 The aluminum housing with a safety vent protects the 360V system.

The Frauscher Mirage system is powered by the largest of Torqeedo’s Deep Blue motors – the i100 kW, which has won awards around the globe. The direct-drive motor has twice the power of previous models and is available for electric-power only, or in a hybrid configuration with a DC generator and an integrated onboard energy management system for longer-range cruising. 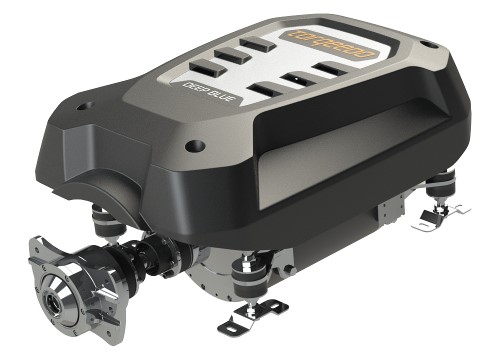 The award-winning Deep Blue i100 motor is the most powerful in Torqeedo’s current lineup.

Torqeedo’s Deep Blue 100i is the first fully integrated inboard electric propulsion system, which is available in two versions – 2400 rpm for faster planing boats and 900 rpm for heavier displacement vessels up to 120 feet. The focus of the entire system, from helm to prop, is on safety. In order to meet recognized production and safety standards, these high-voltage drive systems were developed by joint teams of BMW and Torqeedo experts - an effort that stretched over several years. 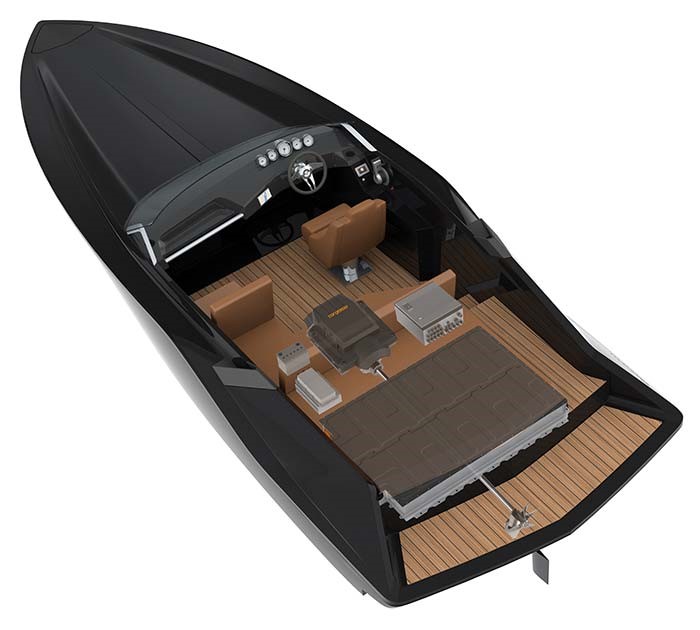 This CAD image superimposes the power system in the boat showing the battery, motor, charger, throttle and interface at the helm.

Other Power Sources. The Deep Blue system can also be integrated with onboard solar or hydro-generation for recharging underway. The Frauscher model will do well where recharging (with ordinary shore power) is available. On lake Starnberg, three facilities were identified along the lake’s 13-mile length, which is more than adequate for hours of top-speed cruising since the batteries offer fast recharging up to 75 percent capacity in less than 1.5 hours. 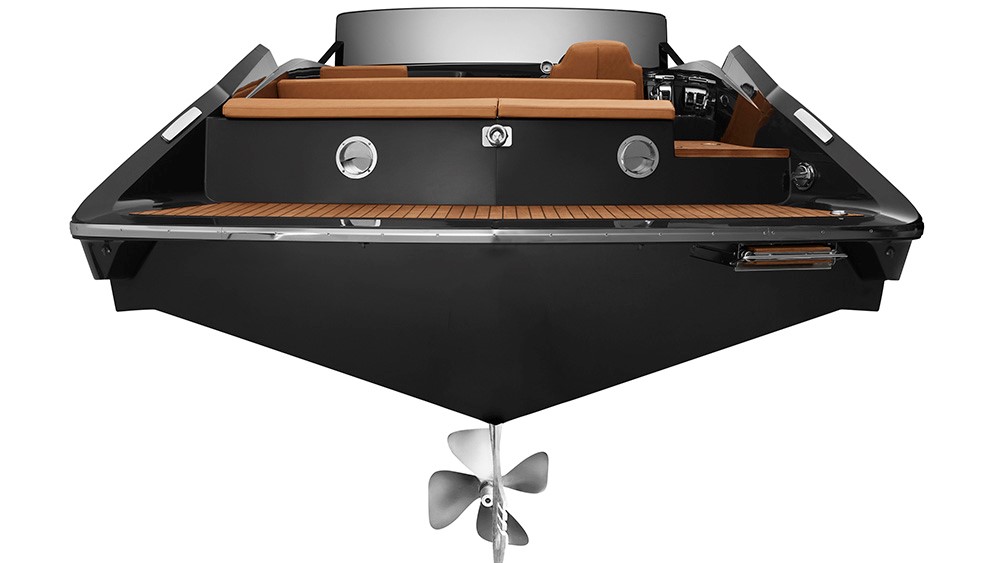 Although normally powered by a sterndrive gas engine, the electric Mirage 740 Air has a direct drive with a shaft and rudder system. 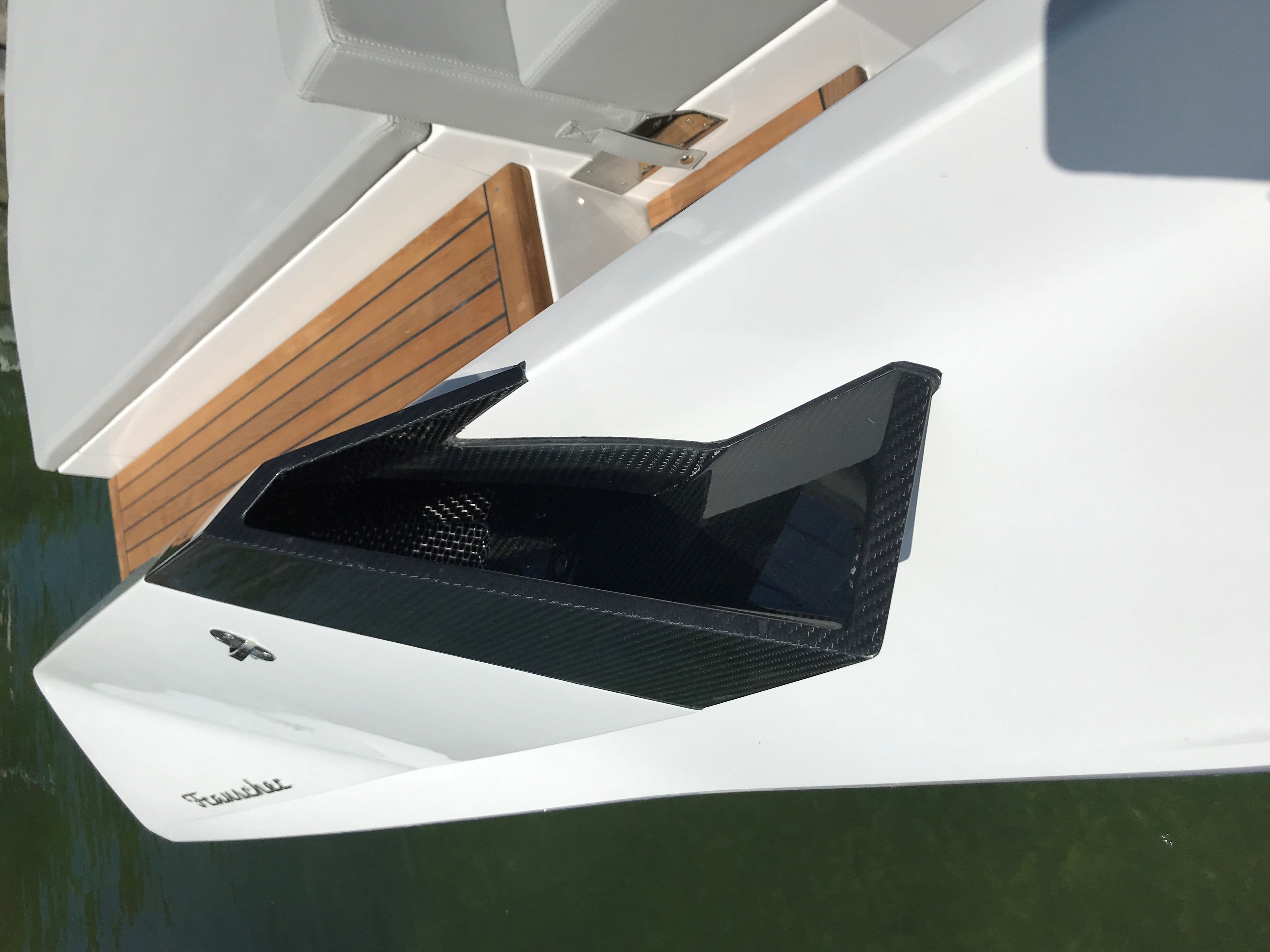 Side engine room vents that normally bring air to the combustion engine are now used to cool the batteries and motor. 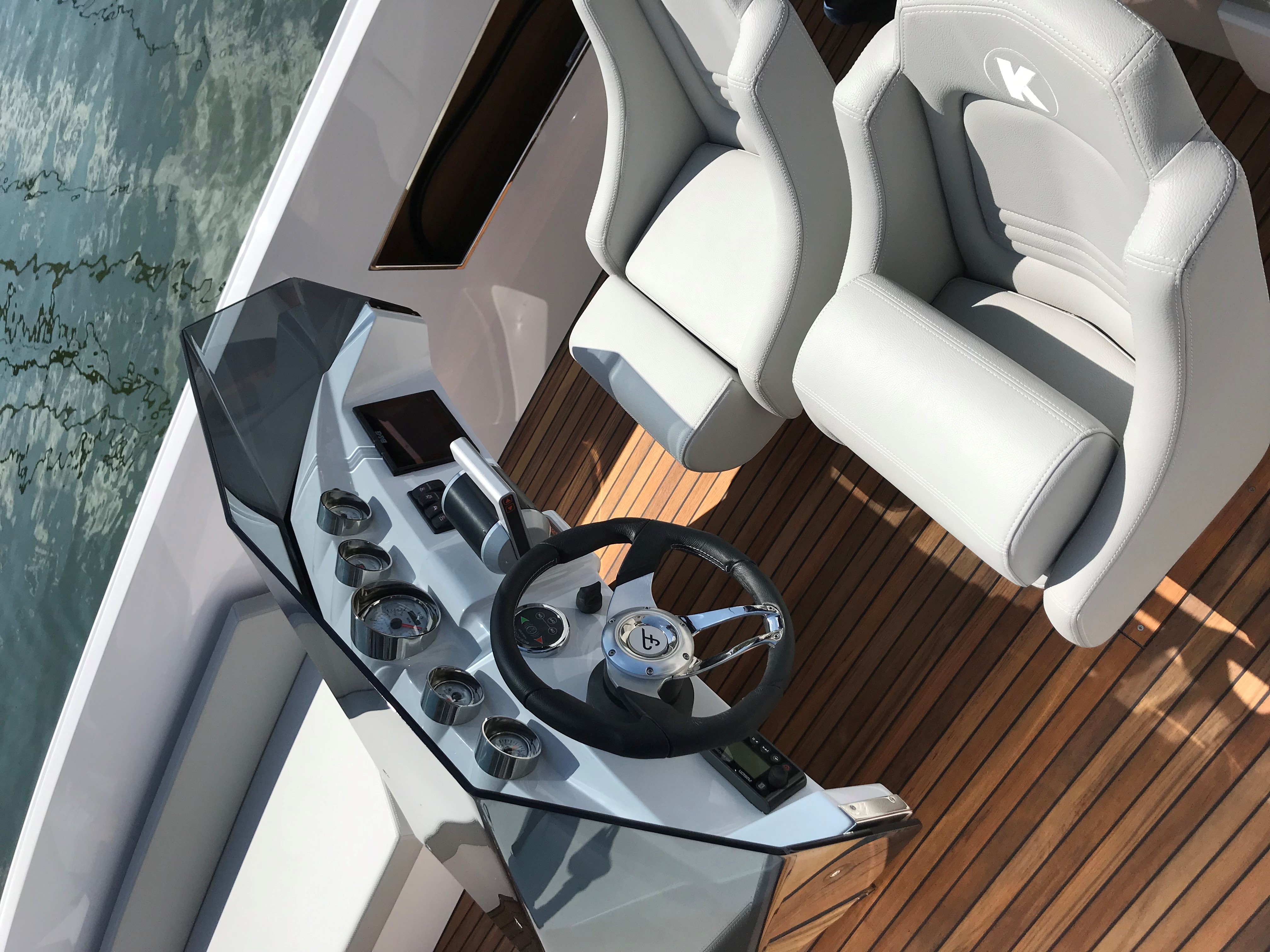 The helm is at the center of the cockpit on a console behind an angled, smoked acrylic windshield. Twin bucket seats with bolsters provide comfort for the driver and her companion. 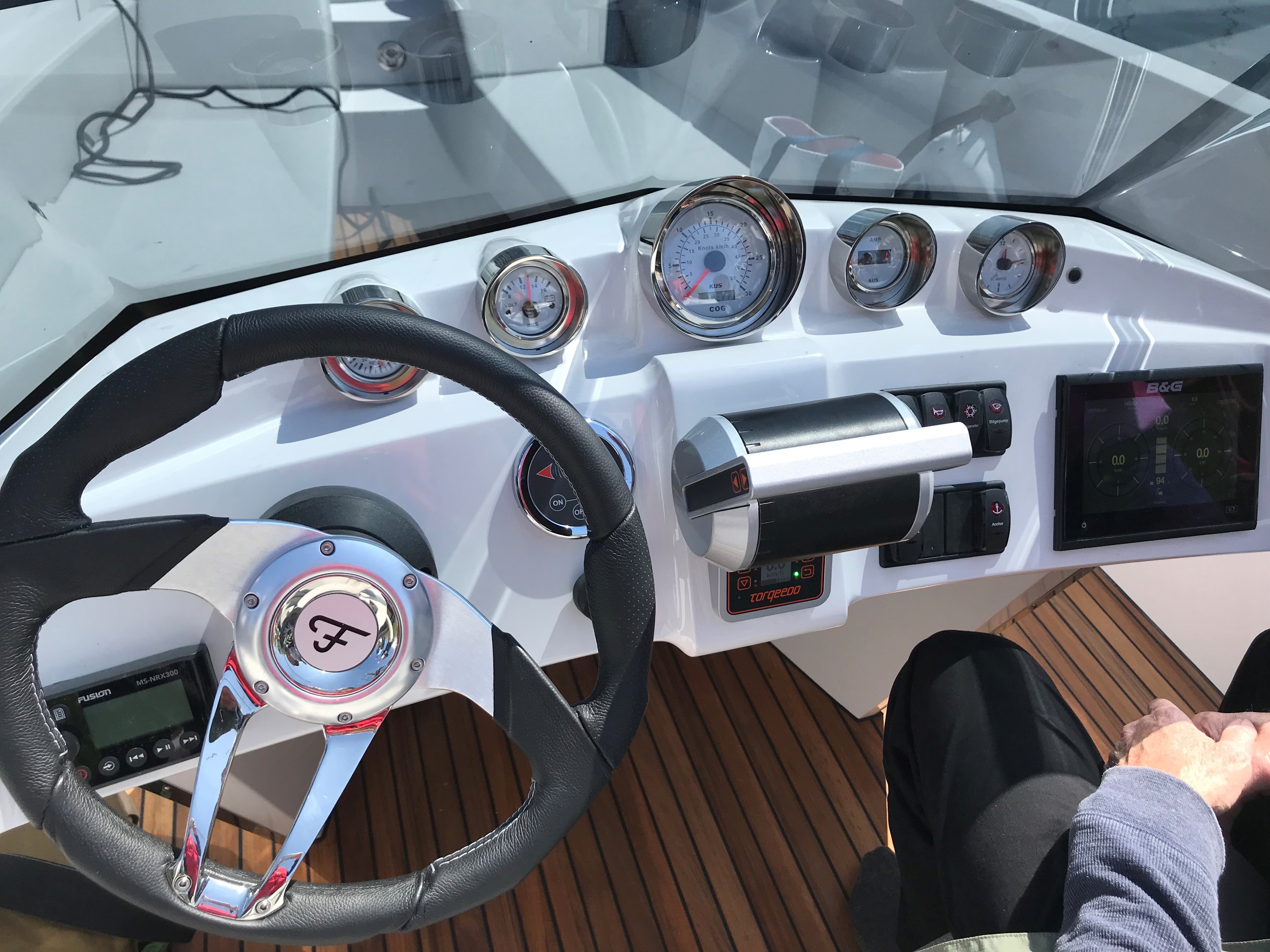 The dash has the wheel to the left, the throttle on the centerline and an MFD to the right. Gages run across the top and the Fusion stereo control is just to the left and down. The cutting-edge throttle design reminds the driver of the advanced technology system under her control.

A top-mount single throttle is inboard of the wheel, which is good for right- handers. It’s one of five throttles that Torqeedo builds and its futuristic aesthetic fits nicely with the concept of high-speed electric propulsion. Bluetooth is built in for integration with Torqeedo’s TorqTrac app that turns a smart phone into a system-monitoring device. 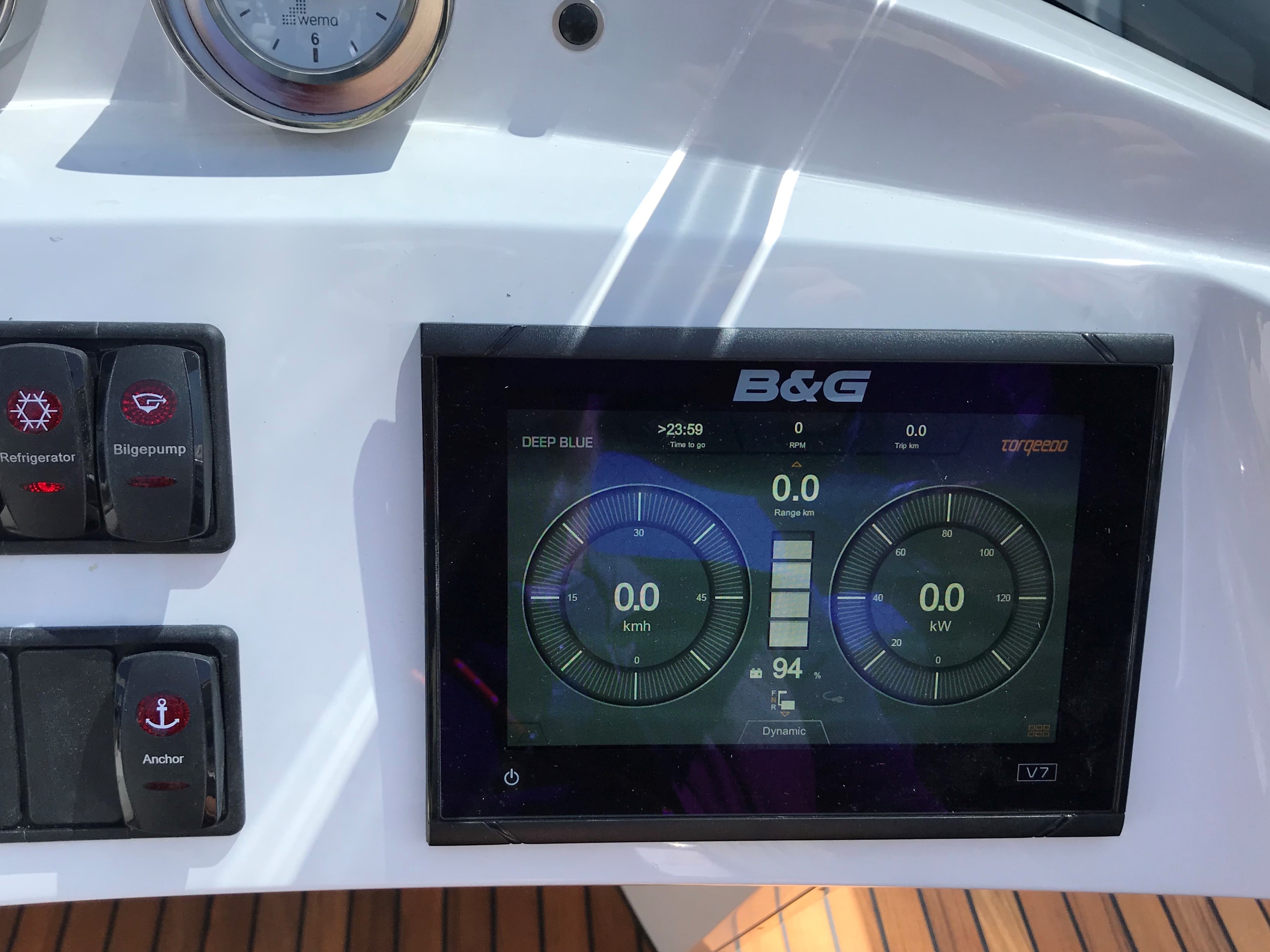 Keep tabs on the range and health of the system with an MFD – the brand can vary.

To starboard, of the throttle is a “dumb” B&G display that has no internal navigation capability but is used as a BMS (battery management system) display. Each Torqeedo system is equipped with GPS so range is automatically calculated. It makes getting home with plenty of battery capacity quite easy. 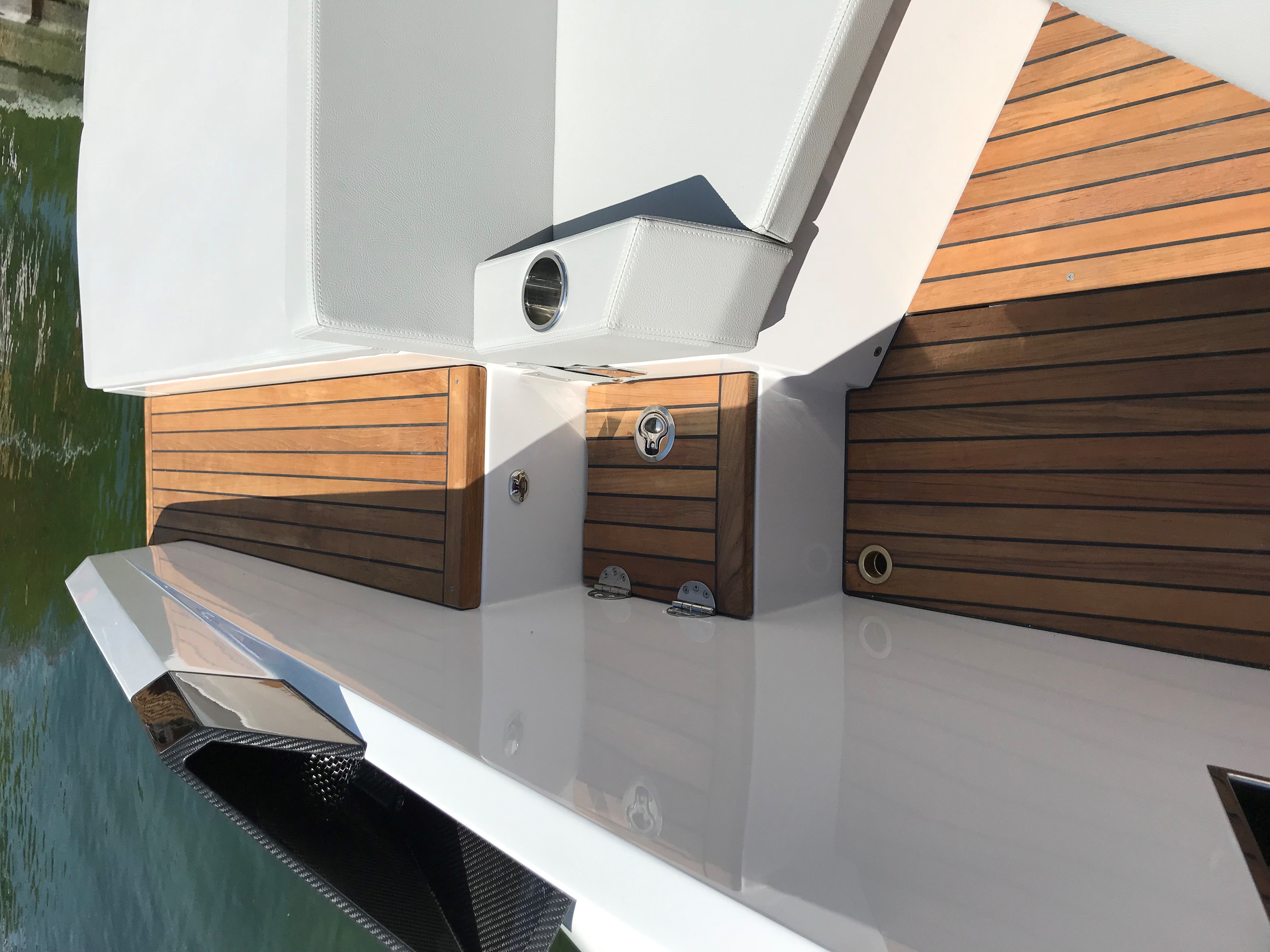 Boarding is easy via the integrated swim platform and starboard walk-thru that eliminates the need to step on the aft sun pad cushions. 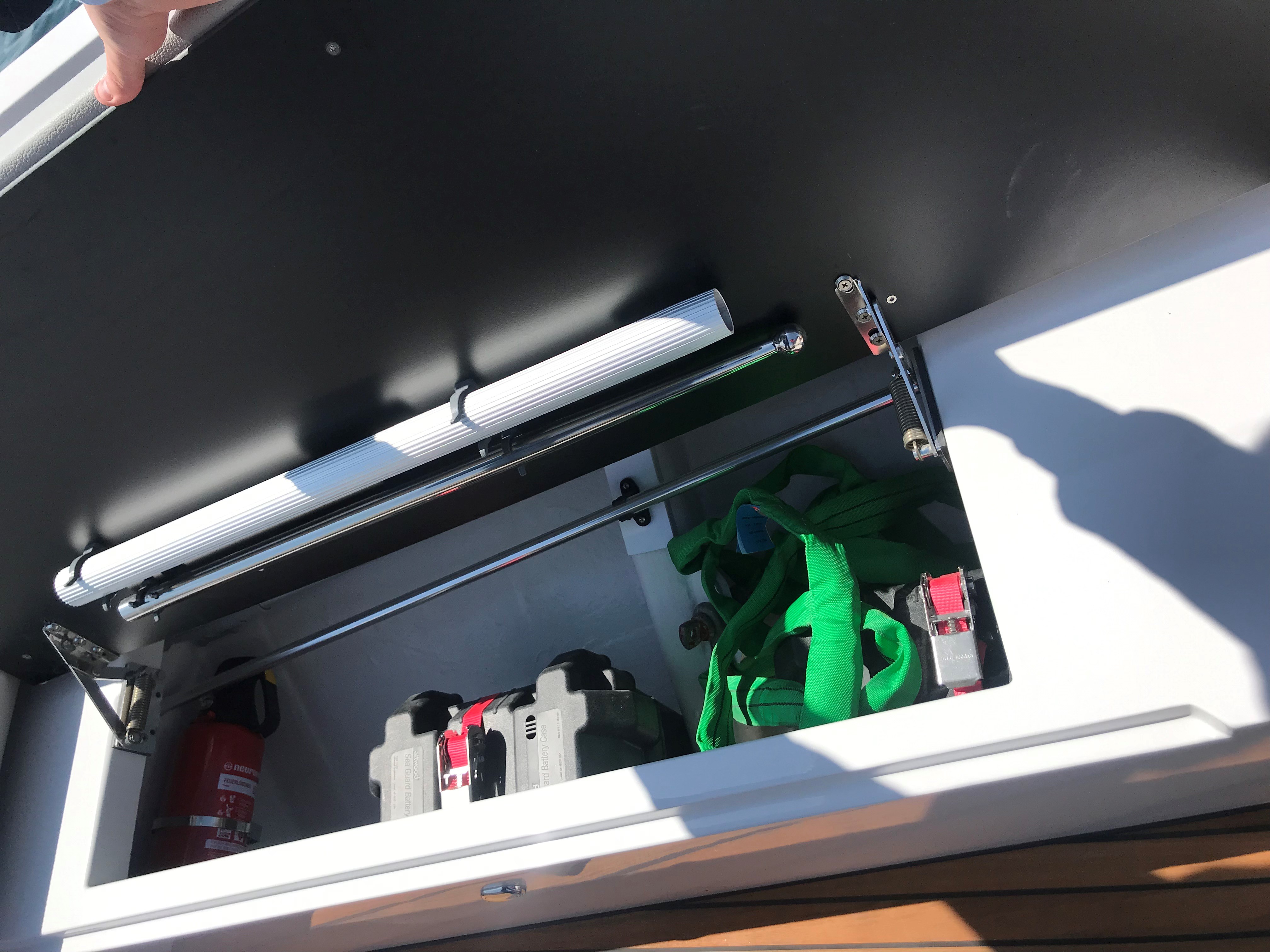 Just ahead of the sun pad is a storage space that also allows access to 12V battery power, for hotel needs like lights and stereo as well as the bow thruster and windlass. 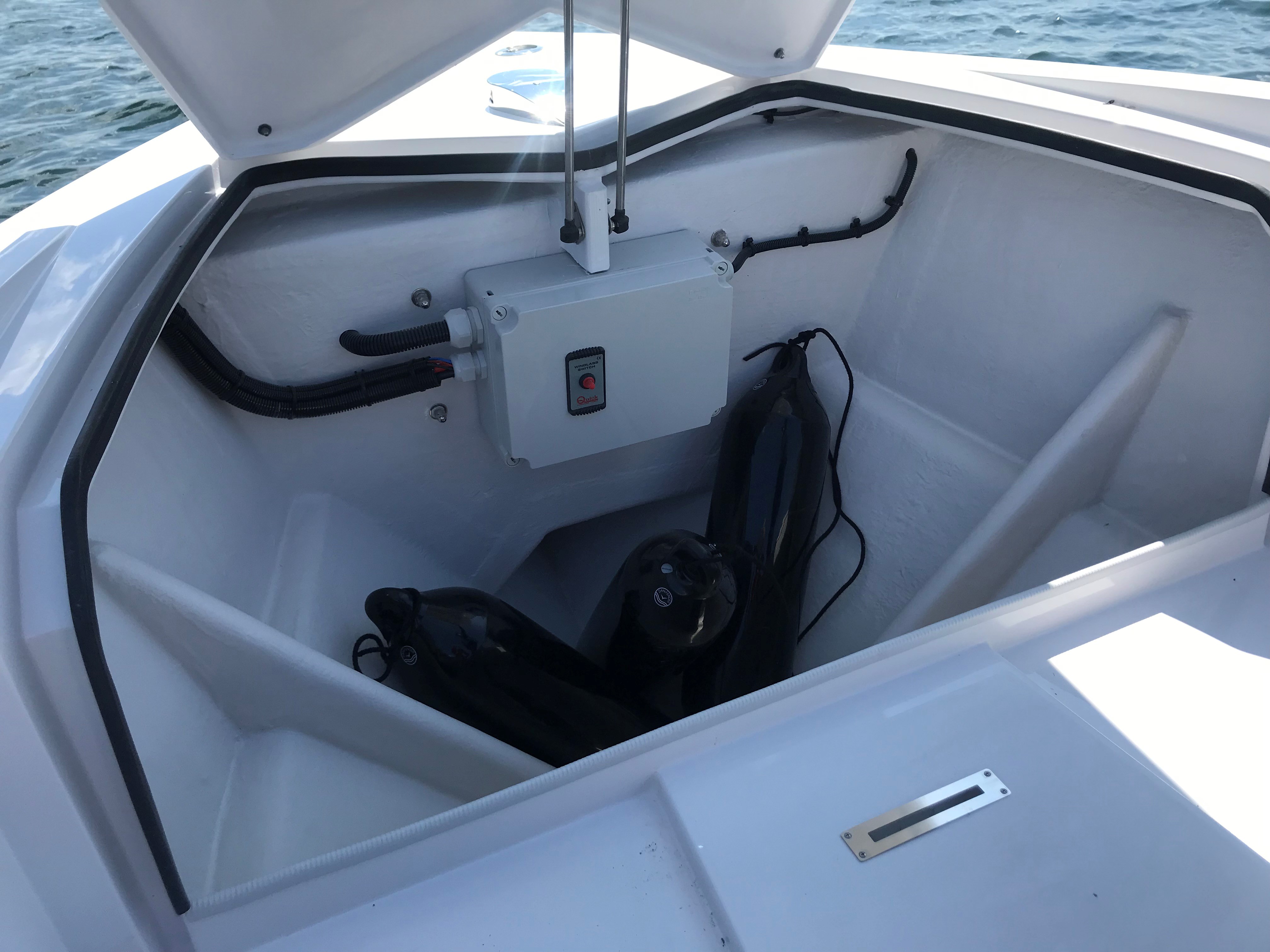 A Quick electric windlass installation is just aft of the anchor locker and has extra stowage space for dock lines and fenders. 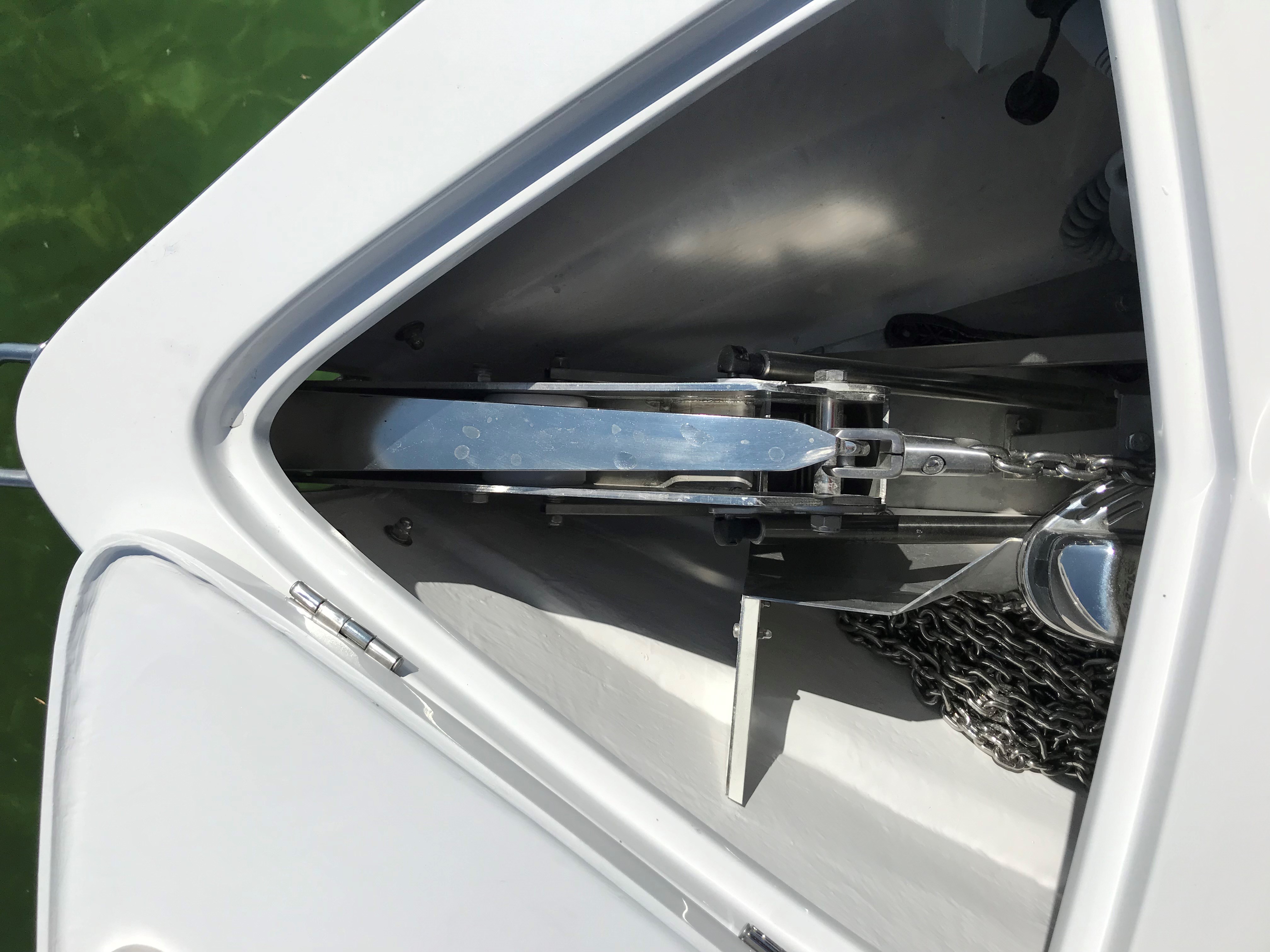 The ground tackle includes a thru-stem roller that keeps the deck clean. 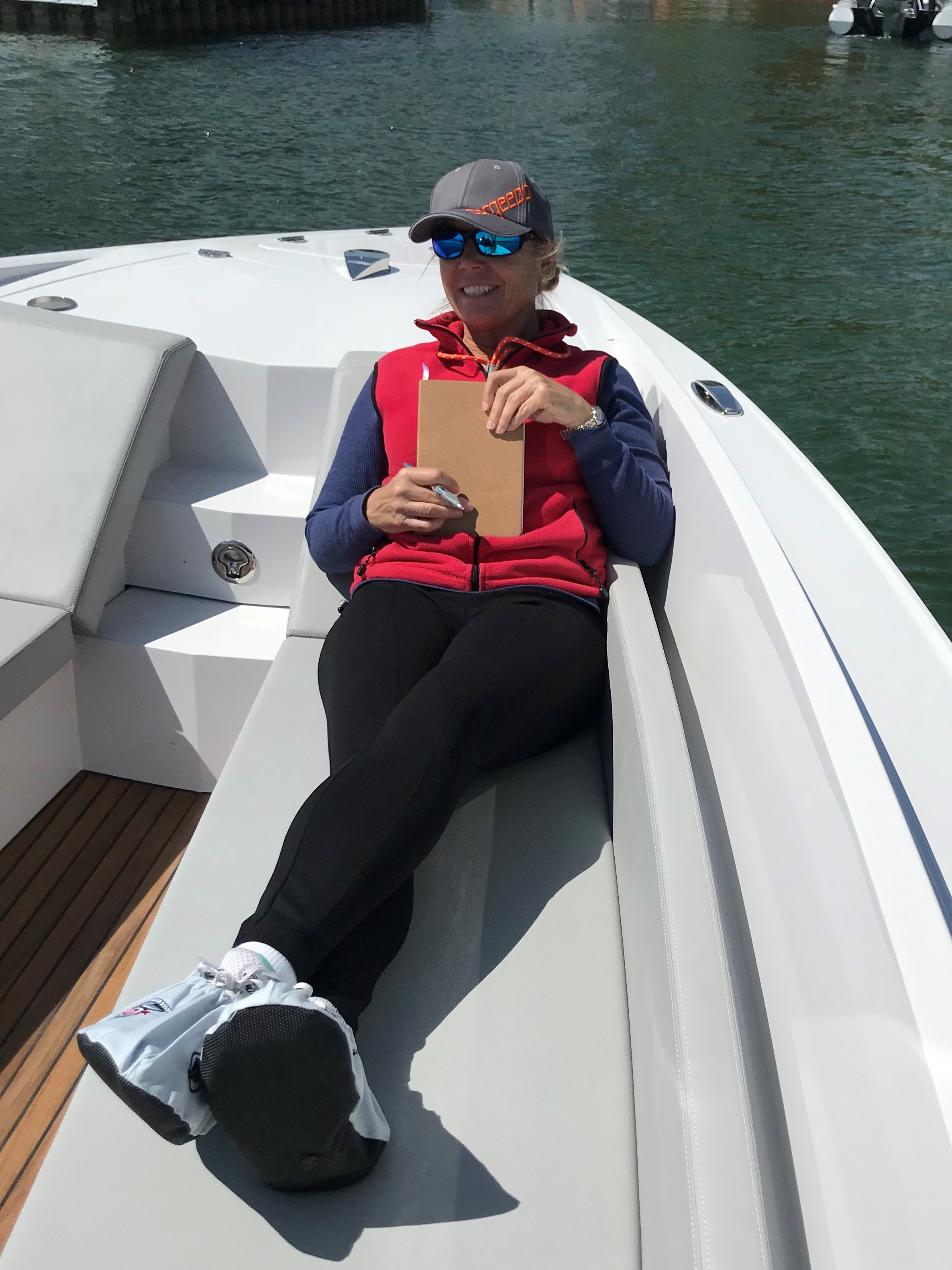 The twin, aft-facing lounges in the bow are perfectly relaxing.

Boat Not Ready. Because she had just been launched for the first time that morning and her debut was a bit rushed, the prop hadn’t been optimized, which seems to have impacted her performance (lower than anticipated top speed) and there was a significant vibration. The water pump that cools the motor could also be heard. Usually, we don’t test boats until the builder has ironed out the wrinkles, but this was our only change to get on the boat, so we all took a gamble. At least we got a feel for the boat and what she could do if properly propped.

She cut through the chop easily and made surefooted turns. Overall, she was smooth throughout acceleration curve. The like was calm the breeze slight.

Happily, in July the problems with propping, vibration and the water pump were all put to rights.  This time the boat was fitted with a 15 x 18 prop and performance was greatly enhanced according to the numbers the folks at Torqeedo were able to get.  The boat was tested on a relatively high altitude freshwater lake, and it is interesting to remember that unlike combustion engines, battery power is not affected by altitude.

The numbers below were sent to us by Torqeedo and they seem to be consistent with the numbers we got given the problems with the prop and vibration. With this set up, it is clear that what is most important is range, not necessarily top speed.

Top speed was recorded by Torqeedo at 29.2 mph at a maxed out 2700 RPM with the Deep Blue motor in “boost” mode.  They recorded a time to plane of 15 seconds.

It should be pointed out that this Torqeedo motor and the twin BMW batteries fitted on the test boat are not the builder’s standard offering.

A 32-quart refrigerator can be tucked forward of the sunpad at cockpit sole level and a Bimini top will provide protection from sun and rain.

The price as tested is $337,000 with two thirds of that being the boat itself and the rest (approximately $120,000) for Torqeedo’s electric propulsion package.

Torqeedo is the leading name in marine electric motor propulsion.  It is building systems all the way from small trolling motors to the Deep Blue I that we have visited here.  The Europeans are particularly keen on electric motors and eco-friendly power generation of all kinds, so it is no surprise that more boats their offer electrical power than in the U.S.

Also, the mode of boating in Europe is different than in north America, as all but a few inland lakes are relatively small. That puts a premium on style, uniqueness, and entertaining functionality.  Boating with an electric motor is certainly a lot quieter – more like sailing.  And that alone, has its joys.