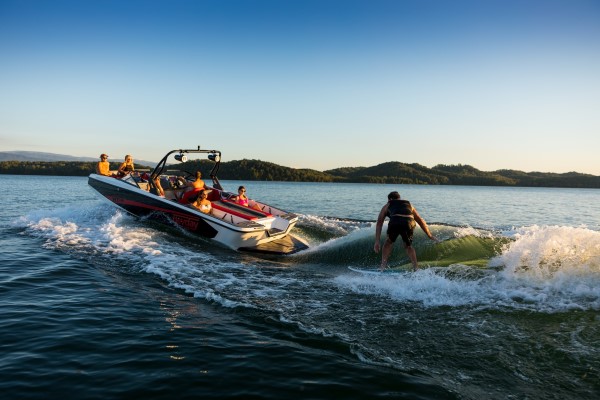 Heyday Wake Boats introduced the WT-Surf, the largest of its line of wake sports boats. The boat has a dual-console arrangement and room for 17, and comes as a complete boat, motor, and trailer package with a starting price of $54,499.

Heyday Wake Boats is making waves in more ways than one. First, there are the boats, now numbering four models including the latest, largest WT-Surf, which cut a striking profile with bold styling and colors, creative use of onboard space for seating and storage, and designs that create the wakes surfers and boarders want without using devices attached to the hull. Even the ballast tanks are built in, integrated into the structure of the boat. And second, it stands to reason that Heyday Wake Boats would be an evolution, since the company was cofounded by the father-and-son team of John and Ben Dorton, who together created innovative wake boats at Bryant Boats. The Dortons sold Heyday to Bayliner in 2016, and remain involved, with Ben assuming the role of portfolio manager at Brunswick.

The four models that Heyday builds range from under 20’ to 25’ (6.09 m to 7.62 m) and each is designed for a specific function. The WT-1 is an entry-level model and features a center console, among other innovations. It starts at about $40,000. Her sister model, the WT-1 SC adds a side console. 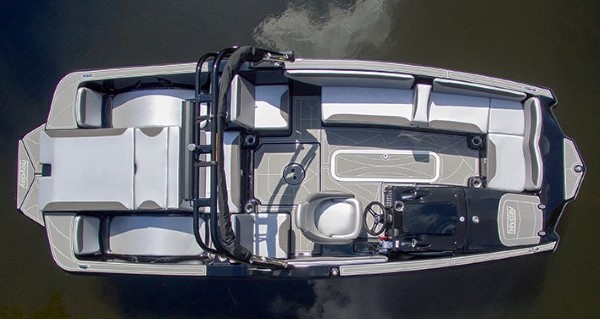 A bird’s-eye view shows the abundant seating on the Heyday WT-2. 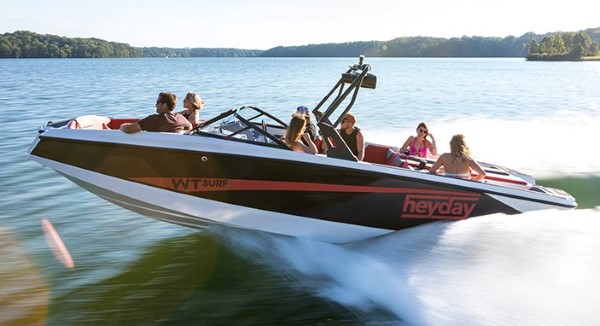 The WT-Surf is the largest model from Heyday Wake Boats.

The WT-Surf has a hull specifically engineered to create a clean, powerful wake for boarding and surfing—without using tabs and other wake-shaping devices. The boat has a dual-console arrangement and room for 17 people, and comes as a complete boat, motor, and trailer package with a starting price of $54,499 with a Crusader Challenger 5.7L 350-hp engine. 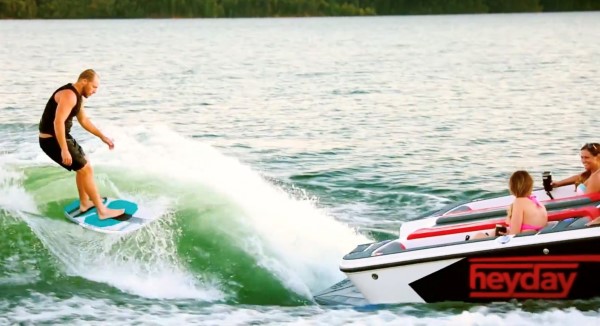 Heyday says the WT-Surf uses its hull shape to create a wake, rather than tabs.

The WT-Surf is a step up from the company’s WT-1 and WT-2 models. “We strategically planned to go from smaller to larger boats in the portfolio lineup as that gave us more room for growth in value,” says Ben Dorton. “As we engineered the smaller boats we found a lot of features that we were able to add into a larger model in a more cost-effective manner.” 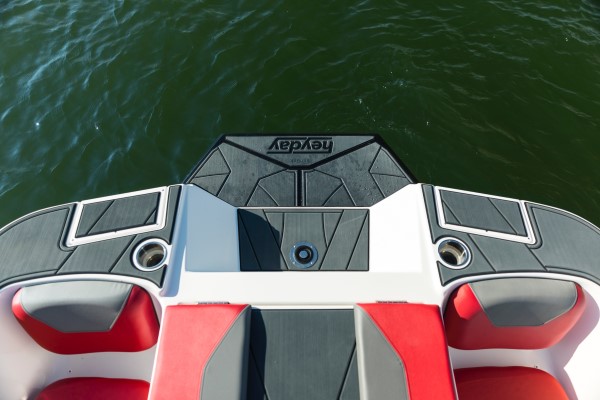 The WT-Surf has nonskid SeaDek® surfaces and steps to the swim platform.

Integrated ballast tanks take up to 2,800 lbs. (1,270 kg) of water on board and are controlled by helm toggle switches. The WT-Surf has a 117-degree transom angle, and the builder says the boat’s transom and bottom design shape the wakes that boarders and surfers want. The boat has an 8’ (2.44 m) beam that carries far forward, where sponsons to either side aid in stability and increase the seating area inside. 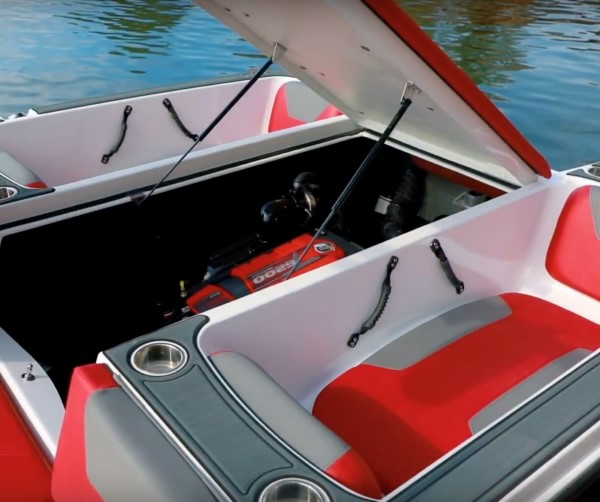 The engine box is positioned between the aft “hot tub seats.”

Power for the WT-Surf includes the standard Crusader® Challenger 5.7L 350-hp, an upgrade to a Mercury 6.2L 320-hp, or other choices providing up to 409-hp, for the power to pull riders, even with full crew and ballast. 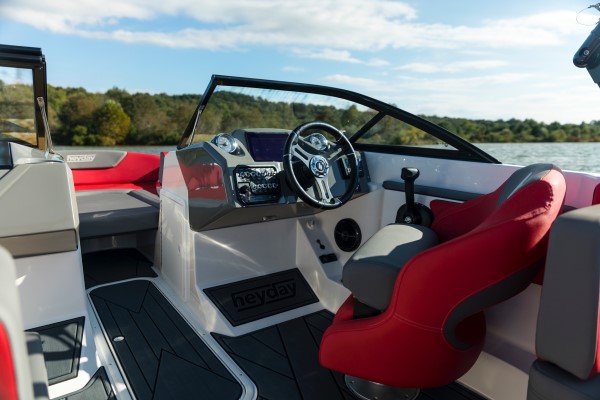 The Heyday WT-Surf has a pass-through windshield and optional helm display.

The windshield has an opening center panel and side wings, and the cockpit has deep gunwales to help keep the crew safe and dry. Upholstered seating throughout the boat features double-stitched seams and offers storage beneath for gear and lifejackets. Decks are finished with nonskid SeaDek®. A tower with a four-speaker Bluetooth-enabled sound system folds for easier storage. 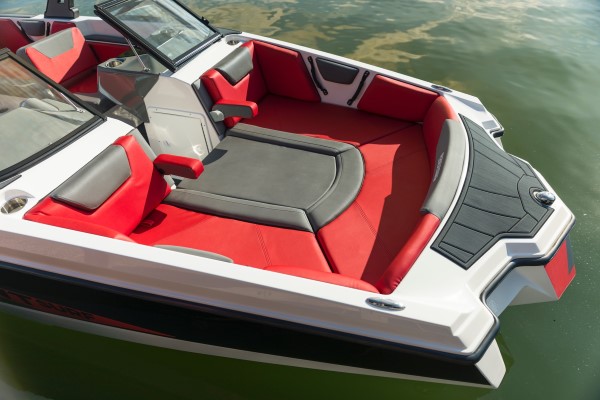 Options include a ski pylon on the transom step, and a digital-screen helm upgrade that connects to the sound system or GoPro and also can show engine data, including fuel burn in gallons per hour, RPM, fuel level, oil pressure, engine temperature, and more. BoatTEST.com looks forward to testing the WT-Surf from Heyday Wake Boats so that we can fully inspect it and report on the boat’s performance and handling characteristics.

When it comes to wake boats, the Dortons know what they are doing, and that is one of the strongest things going for this boat. Also important, is the fact that Heyday Wake Boats is now owned by the Brunswick Corporation and is a division of Bayliner. That is a brand known for making boats affordable, and now Heyday is making wake boats affordable, too.

Although we have not tested or properly inspected this boat, we like several of the concepts inherent in it -- the integral ballast tanks, rather than bags, for example. And, the folks at Heyday are right when they say that it is bottom shape that makes the wake. The absence of contraptions on the transom to create wake is certainly welcome.

Like all true wake boats, this one also seems to designed for protected water. The boat is short on frills, but that is the mission of this boat: create big wake surfing fun at an affordable price.