Hysucat has set out to create a faster, more fuel-efficient, and inherently more stable high performance planing power catamaran. She is intended to be a more functional platform for a wide range of uses — day boating, fishing, marina hopping, diving and snorkeling, a tender to a larger yacht — any activity in which a rigid-hull inflatable boat (RIB) usually excels. 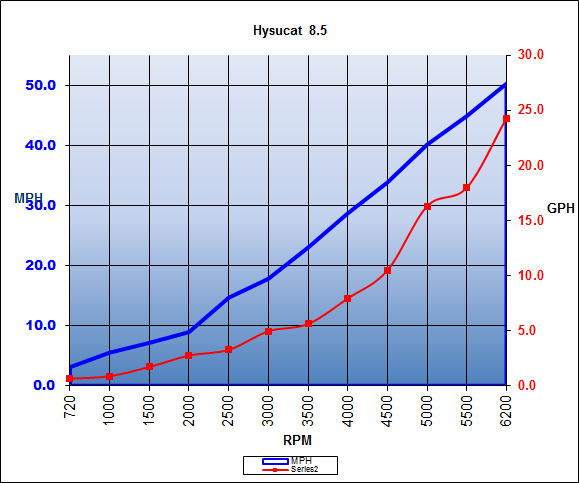 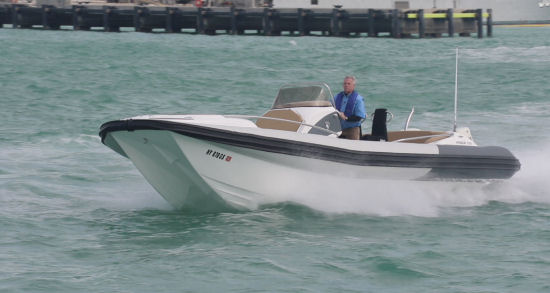 Hysucat has set out to create a faster, more fuel efficient, and inherently more stable high performance planing power catamaran. She is intended to be a more functional platform for a wide range of uses — day boating, fishing, marina hopping, diving and snorkeling, a tender to a larger yacht — any activity in which a rigid-hull inflatable boat (RIB) usually excels.
A power catamaran with those attributes will also be valuable to commercial tourism operators, law enforcement officials, emergency first responders, and the military. 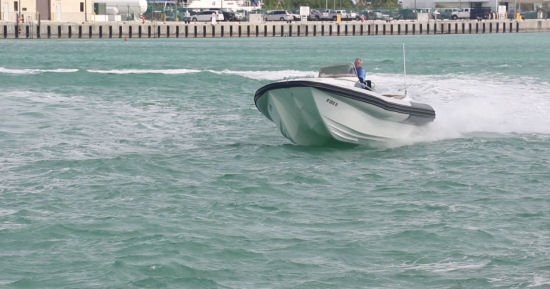 High speed runs in shoaling waters are not for the faint-hearted, but the shallow draft, lift and reduced wetted surface of this Hysucat 8.5 demonstrate that it is possible.

There is nothing new about hydrofoils on boats, the concept being patented in the U.S. and Great Britain in 1898 by Enrico Forlanini. Alexander Graham Bell was an early exponent of the concept and started experimenting with hydrofoil boats on the Bras d’Or lakes in Nova Scotia in 1908. In 1919, he set the world speed record of 70.86 mph in a hydrofoil.
Throughout the 20th century hydrofoils have been used primarily for both passenger ferry and military purposes because of their speed, fuel-efficiency and load-carrying abilities.

in South Africa by Malan Conradie. For 15 years, Conradie had worked with Professor Gunter Hoppe, a world authority on hydrofoil technology, and head of Marine Dynamics at the University of Stellenbosch in South Africa. As a result, Malan Conradie was involved with the design and development of hydrofoil supported catamarans from its earliest days.

The hulls and hydrofoils

of these new vessels were designed and proven in the test tank facility at the university and sea trials were carried out to evaluate the hydrofoil concept. Conradie did the technical design, interior and exterior design work, and Professor Hoppe designed the hydrofoils. According to the company, this led to competing in offshore powerboat events where it proved its superior design by outperforming the competition.
This collaboration resulted in the birth of the original Hysucat – “HYdrofoil SUpported CATamaran” -- which led to a new breed of hull designs that became popular in South Africa. The resulting company took the name of the new concept as its own – Hysucat.

High speeds with relatively low-horsepower outboard engines are easily possible with the Hysucat 8.5.

High performance planing catamaran RIBs are, by their nature, faster and more fuel-efficient than similarly sized monohull RIBs. With reduced drag from two smaller wetted surfaces instead of one big hull, they produce greater speed with similarly-sized engines than monohull RIBs. But they can also be less stable at higher speeds.
Hysucat, an acronym for Hydrofoil Supported Catamaran, brings the science of hydrofoils to performance planing catamaran RIB hulls to add lift, maintain a more moderate trim angle as speed increases – and be far more stable at high speeds.

In profile, the Hysucat looks a lot like the traditional monohull fiberglass rigid inflatable boat (RIB). With a draft of approximately 1'6” (0.46 m), the design is well suited for operation in shoal waters.

The typical layout for the Hysucat 8.5, which is 27’11” (8.51 m) long, shows an open foredeck with U-shaped seating forward, a center console with twin seats forward, two helm chairs aft, and a four-person bench seat across the transom. 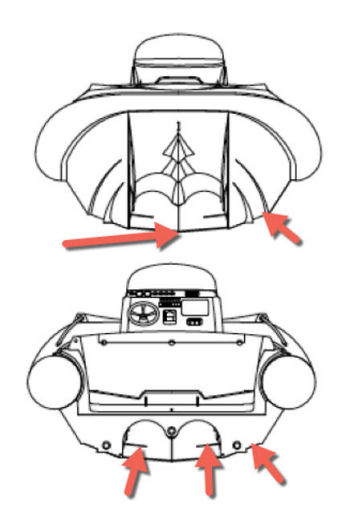 is a stainless steel wing in the shape of a chevron, positioned slightly ahead of the boat’s center of gravity, that spans the tunnel created by the catamaran hulls.
It is parallel with -- but not protruding below -- the bottom of the hulls, meaning that the wing is always in the water and that there may be some protection for it in case of accidental grounding.
As soon as the boat begins to move forward, water passing over and under the shape of the wing generates lift, identical to the idea behind an airplane wing. A low-pressure area is generated on the top of the wing, and a high-pressure area is formed on the bottom of the wing. 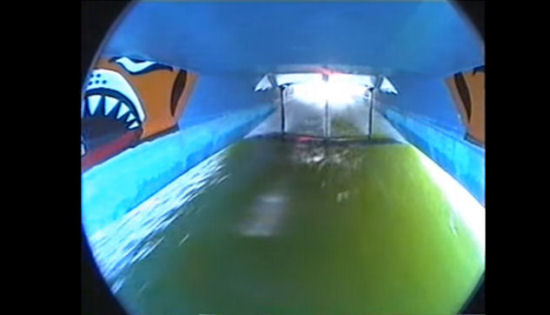 , lift increases, forcing the boat upwards and decreasing drag – again, just like an airplane wing. The relatively small wetted surface offered by a catamaran hull is made even smaller as lift continues.

There is no doubt that air trapped and compressed in the tunnel at higher speeds will also add to the lift potential before passing through the end of the tunnels at the transom.

In addition to the main foil, there are also two “trim” foils aft in the tunnel walls ahead of the transom. These act to lift the transom and help the boat run at a steady fore-and-aft attitude at low and medium speeds. In effect, the foils automatically and continuously trim the boat.
Trim foils also play a part in helping the boat reach planing speed more quickly. Unlike the main foil, they will eventually rise above the surface of the water at high speeds, and drag will be further reduced. 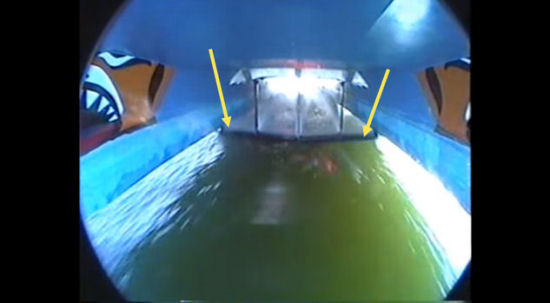 This image was taken as the high-speed ferry was going 30 knots. Note that only a few inches of water are over the foil.

How Efficient is This System?

The builder tells us that the Lift/Drag ratio of a typical planing monohull is 4:1, while that number for the Hysucat catamaran hull with a foil is 20:1. The company also tells us that one of the benefits of the higher Lift/Drag ratio is that the boat will carry more weight at speed and require less power to do it than conventional craft — monohull or catamaran — without foils. 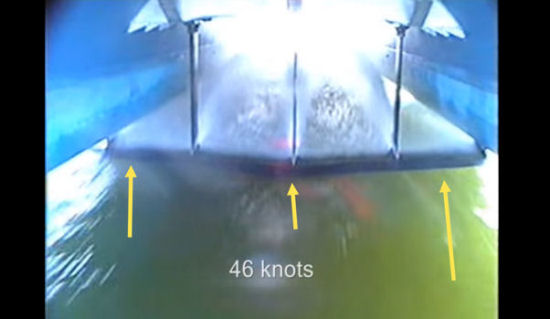 A view of the hydrofoil wing at the ferry hits 46 knots. Here the boat is fully raised, reducing wetted surface to a minimum. 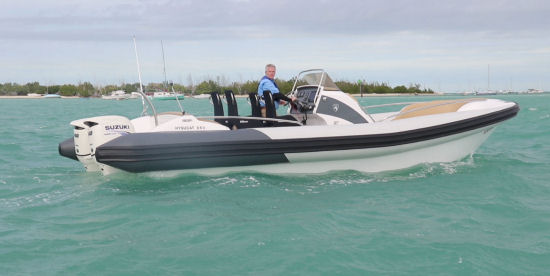 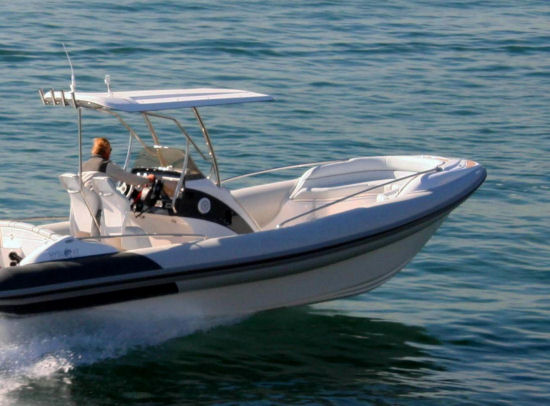 Shown here with an optional T-top with rocket launchers on the aft edge, the Hysucat 8.5 has high bulwarks thanks to its 1’7” (.48 m) tube diameter. Optional Flexiteek decking improves footing.

The Hysucat 8.5’s forward cockpit has two steps up to the bench seating level, under which there is locker storage. This is due in part to the upswept lines of the bow, which should provide a more comfortable ride in big waves.
Two stainless steel handrails, attached to the fiberglass deck structure forward and to the deck of the boat just aft of the forward edge of the console, add good security when moving around the boat. The 1’7” (.48 m) diameter inflated tubes, which have seven compartments for fail-safe buoyancy, add to the safety of the bulwarks outboard of the handrails.
The builder offers several decking solutions, including Flexiteek, which is easily maintained and helps cut down heat transmitted to bare feet. 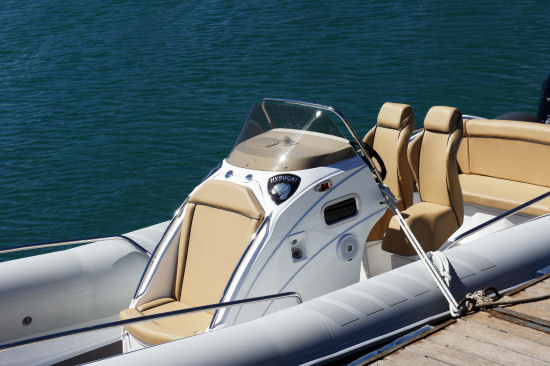 The forward facing seat is integral to the center console, and note a Igloo cooler seat that we often see. Note that the Valmex PVC buoyancy tubes have slip-resistant surfaces for stepping aboard safely.

has a doublewide seat for recessed into the console, with storage under, that is flanked by thoughtfully placed stainless steel handrails. There are two long stainless steel handrails that help protect both sides of the forward and aft seating areas.
The builder has specified slip-resistant fabric pads near the center of the buoyancy tubes, just the right place to step aboard and down while having a safety rail within easy reach. 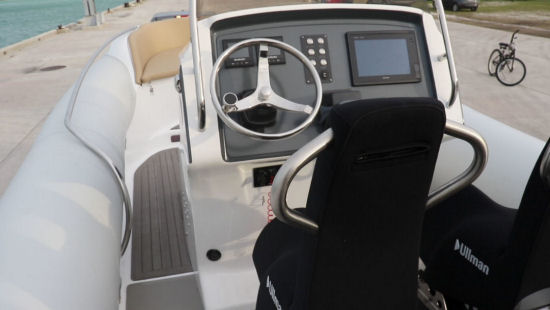 Note that the grab handles on the backs of these narrow seats/bolsters are a necessity for riding passengers who are standing during high-speed operations.

The console is also equipped with a handrail for the safety of the helmsman and mate. Grab handles on the backs of the helm console seats add security for those times when passengers wish to stand. And there are two more long handrails for the aft cockpit passengers, as well. 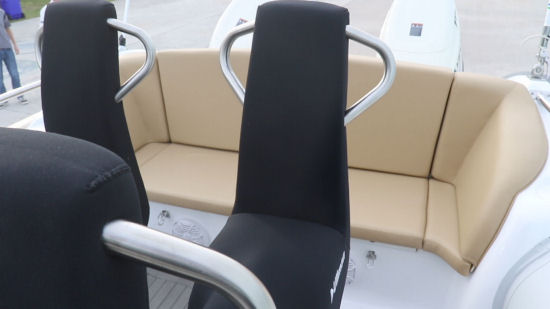 The specially made seats double as leaning posts for high speed operation which this vessel is designed for. Note that the stainless steel pole supporting the optional T-top is just ahead of the transom bench seats and fastens to the cockpit sole.

There is locker storage beneath the four-person transom seats, which are well padded and include thigh support. The 9’6” (2.89 m) beam makes this wide seating possible. 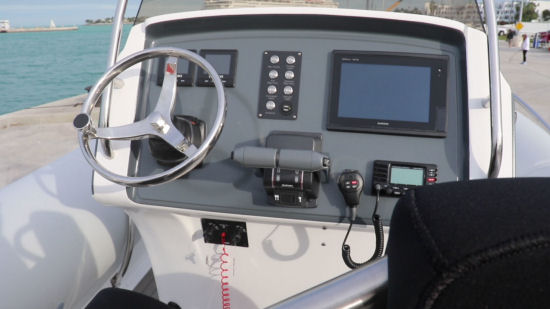 The steering wheel is set to port on this console, leaving room on the right side of the wheel for the shift and throttle binnacle. This is a standard installation, but we would like to see them placed more ergonomically friendly.

There’s room on this helm console for a sporty wheel, with an option for a stainless steel wheel on a tilting base. Analog-style tachometers flank a speedometer just above the rim of the wheel, and the shift-and-throttle binnacle is placed for easy use in the center of the console. The builder offers a wide range of single and double screen MFDs, and there’s room left over for a VHF radio and an autopilot. 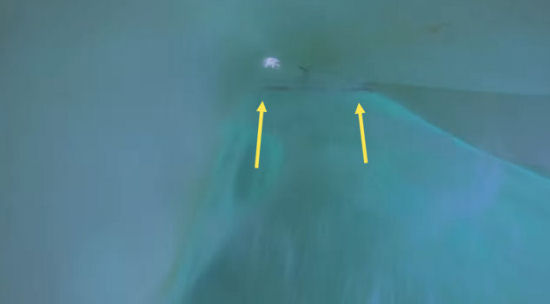 Image taken between the hulls of a Hysucat 6.5 RIB. The foil acts just as it did on the high-speed ferry, reducing wetted surface and improving riding comfort. This boat was powered by twin 60-hp outboards. 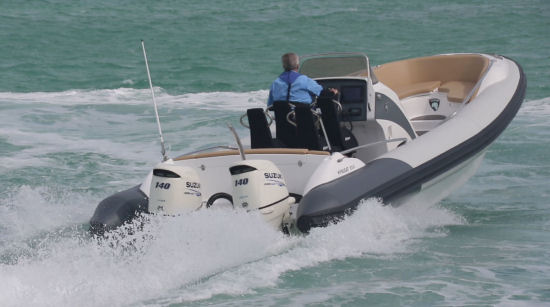 In twin outboard applications, the motors are slightly toed out to keep them in a continuous flow of water coming off the bottom of the catamaran hulls.

With the hull being supported by hydrofoils, this is without a doubt, the smoothest handling RIB we’ve been on. We tested in choppy conditions that should have rattled our fillings loose, and would so in a “normal” RIB, but this is no normal RIB. With the hydrofoils cutting through the chop, and the hull simply skating over the top, we cruised with complete comfort through the turmoil. She turns well, rolling into the turns thanks to the variable angle of the foils. Frankly, her handling was so smooth, it was easy to doubt that we were on a RIB… until we look to the sides. 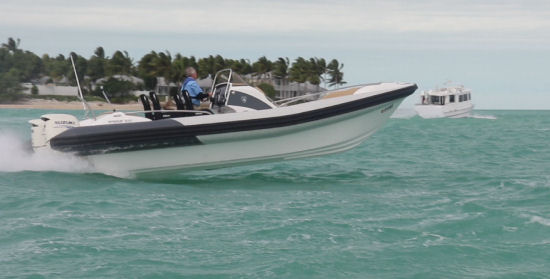 Coming out of the hole with full throttle, this boat seems to have lifted the main foil clear off the water. The aft foils will quickly drive the transom up and the bow down.

Through intensive tank testing and construction of trial craft, the builder has achieved substantial performance and efficiency gains that will translate into popular multi-mission RIBs.