The Kadey-Krogen 58 is a full-displacement yacht designed and built for long-range cruising at economical speeds and owner comfort. She is a semi-custom robust vessel designed to go most anywhere. She is powered by twin 160-hp John Deere diesel engines. With these engines, she has a range of more than 2,900 miles at 7.5 knots. 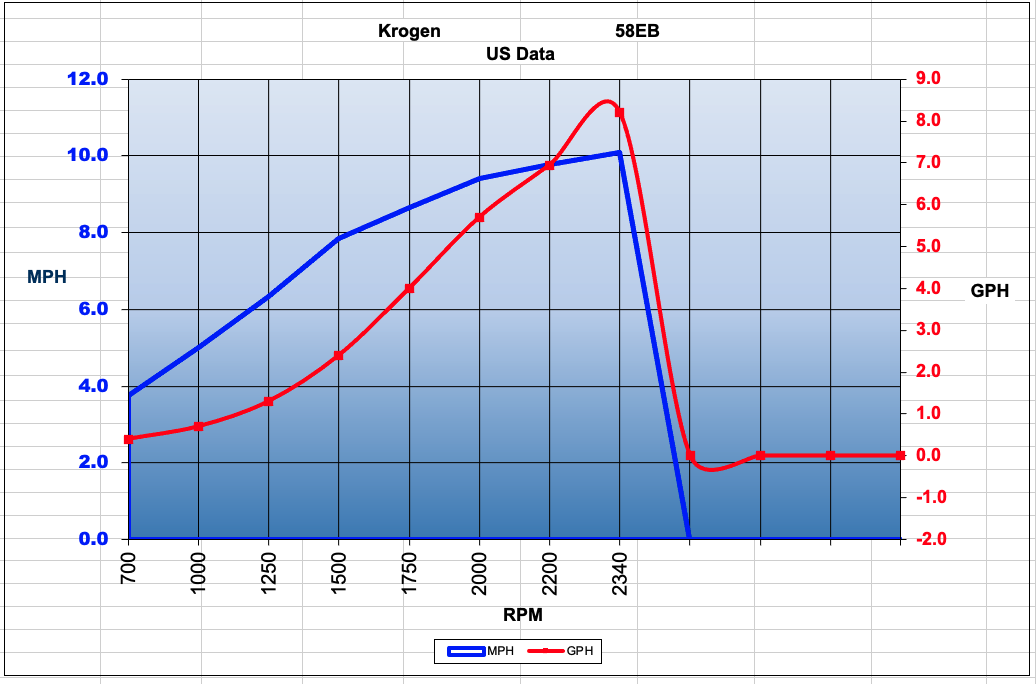 The Kadey-Krogen 58 is a true trans-oceanic yacht easily managed by two people but able to accommodate a group or large family. This vessel carries enough fuel for long passages at displacement speeds.

The Kadey-Krogen 58 that we tested was hull #24 of the 58 series and she is second in the “extended bridge” series. She’s a full-displacement yacht and a semi-custom build. Several of her features seen onboard are the result of customer requests. Being full displacement, she’s not built for speed but for range. At 7.5 knots, she’ll keep running for 396 hours and just under 3,000 nautical miles. Pushed to her full-throttle setting, she’ll top out at 8.8 knots.

Fit-and-finish seems to be the hallmark of the brand. It shows in the 58 with American Cherry seen throughout.

Major Features of the Kadey-Krogen 58 EB

Stabilization is via ABT-Trac hydraulic fins.  This provides at-rest stabilization as well as underway.  A Seakeeper gyro is an option, but the fins seem to be the overwhelming choice of buyers.

The Kadey-Krogen 58 EB is big and heavy. This makes her extremely easy to handle, particularly at the dock, where the keyword is slow.  Our test boat had the optional bow and stern thrusters. The port and starboard wing controls take the guesswork out of docking by eliminating obstructions and parallax views.

She has considerable windage. By being aware of the wind direction and strength, it can be used as an aid to docking. When docking against the wind, we found her bow thruster and engines were strong enough to move the boat in the conditions we encountered. Her 16-3/8” x 21” Nibral props grab the water. By pumping the engines in and out of gear, we had firm control of the boat and docking was controlled.

The electric bow thruster made some noise — like they all do — but not as much as most because of the thickness of the hull. We did not lean on the thruster for a long period of time, so we cannot report if it would heat up enough to throw a breaker.

It has been some time since we have heard of an electric bow thruster overheating, so we would think long and hard about opting for an expensive hydraulic system.

Offshore, she responds to the helm as one might expect — a bit slowly. But remember this vessel is more than 100,000 lbs. (45,454 kg). Nevertheless, she does respond to the helm. We must admit that we used the autopilot most of the time, instead of turning the large, wood destroyer wheel.

The benefit of this heavy boat is that she rides extremely well. She was one of the most comfortable boats in class that we have ever spent a couple of weeks on.  On the anchor, it's like being set in concrete — as well as she should since she has 7,200 lbs. (3,265.87 kg) of encapsulated lead ballast. That ballast lowers her CG, adding to stability.

We like the access to the engine room because it's off the accommodation’s passageway and just a couple of steps down. It is a handy stopping place on the way up to the galley in the morning and on the way down to the stateroom in the evening.  It is also handy for drying out wet clothes.

There is access to the engine room through a watertight hatch from the lazarette, which is reached through a hatch in the aft deck.

Our test boat was powered by optional twin 160-hp 4045A John Deere engines.  As a single-engine option, there is the 325-hp six-cylinder John Deere.  Out of the 24 models that have been built, only one of them has been the single-engine choice.

Reasons for this vary. In addition to losing the redundancy, the draft is a foot deeper with the single-engine. Redundancy is achieved with either a wing engine or a hydraulic drive of the generator.

We recommend the twin 160-hp John Deere over a single-engine because it is likely to be more fuel-efficient.  Two 160-hp engines don’t have to work as hard as the single because they have two props putting the engines’ torque to the water, not just one. Also, the boat is much easier to dock with twins.

Other notable equipment includes a standard 20kW Northern Lights generator and a Reverso fuel polishing system. The 1,760-gallon fuel tanks are made out of aluminum and have sight gauges.

Moving the cabin side out an extra 2.5” (.76 m) or so makes a world of difference. It creates a large, comfortable space that is easier to move around in.  The overhead is 6’8” (2.03 m) and there is a teak handhold right down the centerline.

The Krogen 58's salon has a conventional layout with an L-shaped sofa to starboard and freestanding easy chairs or barrel chairs to port. Decking is cherry and spruce. A movable and expandable coffee table is in front of the L-shaped seating. A wine cooler or icemaker comes standard in one of the cabinets.

Large surrounding windows allow plenty of natural light and all bulkheads are finished in American Cherry. Double-wide 45” (1.14 m) weathertight aluminum doors lead to the aft deck to expand the gathering area and make access easier when other operations are underway. A roll-up screen on track can be deployed to keep the bugs out.

The galley is located to the forward end of the salon on the main deck. Countertops are granite and have raised fiddles to help keep things from sliding off. The galley is U-shaped but thanks to the Dutch door to the starboard side there's no real “dead end” to be concerned with. Not all galleys have this door and we consider it an important amenity for fresh air and deck access.

There is a full-sized side-by-side Jenn-Air refrigerator-freezer, a convection microwave and an optional induction cooktop (Propane is standard) with an exhaust fan overhead. More refrigeration in drawers is to the port, extending the useful area of the galley.  Storage solutions are seen everywhere, including a pull-out pantry which is a hallmark of any passage-making yacht.

Other amenities include a double basin sink, dishwasher, trash and recycling bins.

The pilothouse is raised and it provides outstanding views.  Cherry wood is used throughout and all have a satin finish.  Weathertight “Dutch” doors are to both sides so we can have ventilation in sloppy conditions without water sloshing in and quick access to the side decks.

Large display screens adorn the panel.  Dual Slimline high-back Admiral Stidd helm seats come standard for the operator and observer.  The steering wheel, usually an afterthought on an expedition yacht, is fabricated from the same American Cherry seen throughout the yacht. Window mullions are easily opened with no tools for inspection of wire runs

Aft is an L-shaped settee surrounding a pedestal table, all on a raised platform for improved sightlines.  Further behind is a berth for the off-watch. This is particularly handy for a couple cruising during long passages.

A standing area to the port side has a table for charts.  Below are the main power panels for the yacht.

The aft deck on the Kadey-Krogen 58 EB is designed for several purposes: a staging area for launching other activities, such as scuba diving, shore excursion preparation, and entertaining.  Our test boat had a round table on the aft deck to port that could seat four people for cocktails or dinner. Note the wet bar and counter to starboard.

Because the boat deck extends to the transom, it is easy to enclose this space. This makes it a three-season venue when cruising close to home. Our guess is that on long passages, this area will be used for handy storage for all sorts of things.

While it is not talked about much, the primary market for boats such as the Kadey-Krogen 58 EB is older and retired. Some are in their 70s or 80s. As a result, Kadey-Krogen has reduced the need for lots of physical strength to a minimum.

Providing a place to store heavy items on the aft deck, instead of in the lazarette, is a prime example of making the boat more elderly-friendly.  Another example is the absence of ladders.

This version of the 58 is the EB (Extended Bridge).  On the early models of the 58, the flying bridge was further aft and had a much lower profile. Moving it forward allows for the flying bridge to be more of an entertainment venue rather than solely operational.

Cooking is abaft the flybridge on the boat deck, where there is more room and stability.   A huge fiberglass structure has room for a propane tank, a grill, refrigeration lockers below, drawers for cooking utensils and any other gear needed for entertaining.

Additionally, by moving the flybridge forward, Kadey-Krogen was able to add a day head and an off-watch berth in the pilothouse.  The flybridge of the 58 we inspected was also enclosed in isinglass, something that most owners choose not to do since if the weather becomes inclement, operations are simply moved to the pilothouse.

Three factors should be considered when comparing a Kadey-Krogen to the competition.

There’s just no such thing as an old worn-out Kadey-Krogen.  And thirdly, Kadey-Krogen is not a high-volume builder, so the market is not flooded with a wide range of available brokerage yachts.  As of this writing, we are told that there are only 675 yachts on the water worldwide.  That may sound like a lot of boats but in a span of 45 years, it's not a lot of boats. A Kadey-Krogen holds value. 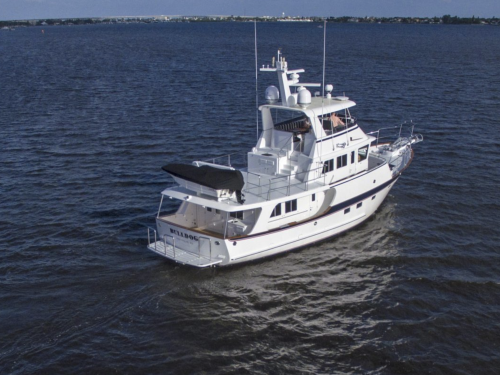 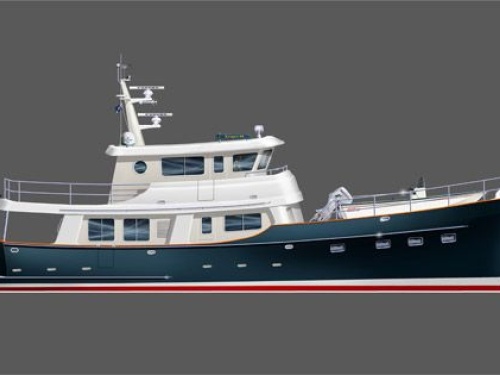 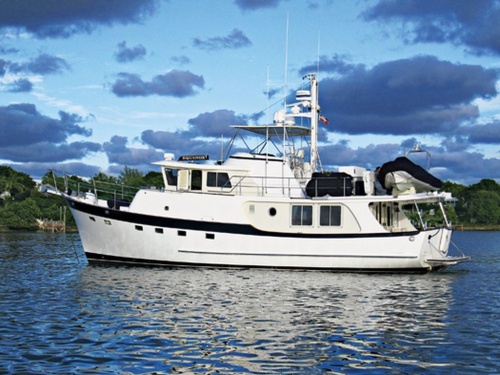 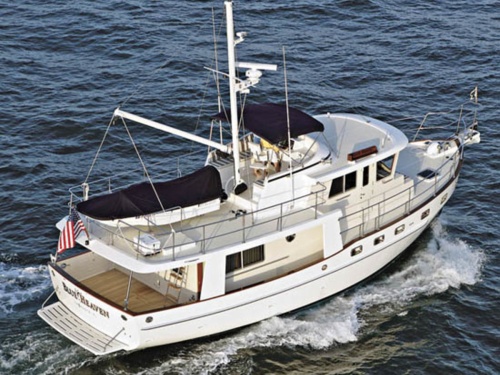