Malibu's new 22 MXZ is a hot new wakeboat designed for the elite corps of wake aficionados who like to do their tricks in front of a large, admiring audience. Malibu has pushed the helm back and put a pickle fork on the bow to maximize seating and sunning area for wake dudes' babes. Below, more V has been added to the boat's bottom to help create even more wake. If all of this isn't enough, then add the optional Power Wedge which drives down the transom farther, creating as much wake as 1200-lbs of ballast, according to the builder. The wake tower is standard and this boat is hot to tow. 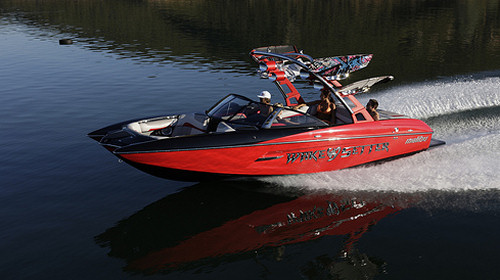 Malibu tells us that the target audience for the new 22’ 3” Wakesetter model is “anyone who wants to enjoy time on water aboard a comfortable wakeboard-style boat." Further, she has been designed to offer "the best pull" in Malibu’s line-up of wakeboats. The MXZ is targeted "for high-level wake-boarders, or those who have aspirations of reaching that level.”
That is a pretty crisp, unambiguous, mission statement for the 22 MXZ and should put the usual suspects on notice that there is a new boat on the prowl. 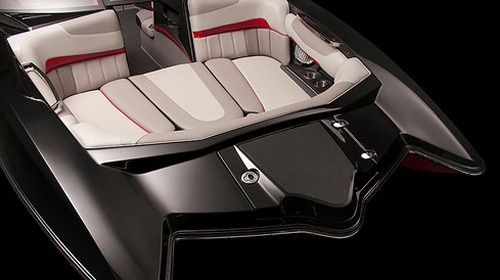 The most notable feature of the 22 MXZ is the new pickle-fork bow configuration. Here we see it with the center fill cushion in place, making one huge sun pad or play pen.

The MXZ also has a new hull with a deeper semi-V design specifically designed to create wake. 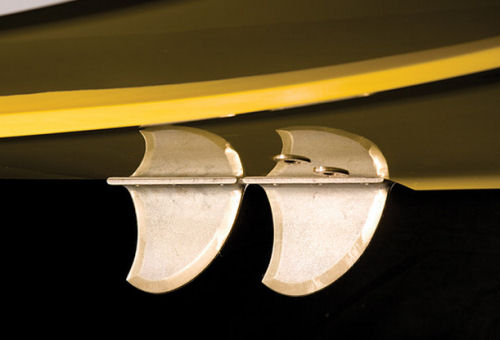 The keel of the Wakesetter 22 MXZ is equipped with large tracking fins.

What Malibu refers to as ”Gorilla Fins” are fitted to the Wakesetter’s hull to enhance the boat’s tracking and turning abilities and to help eliminate rolling and sliding in turns.

The helm of the 22 MXZ has been moved aft slightly to create more space for lounge lizards. 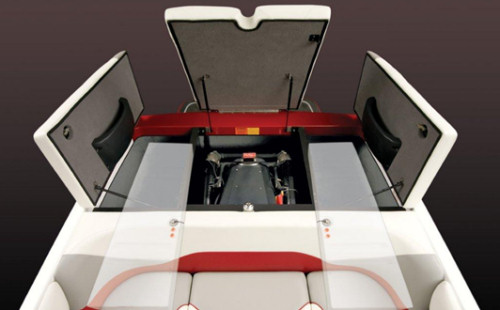 Built-in, hard-sided ballast tanks are offered in three locations aboard the MXZ model, and are quickly filled and drained with high-flow pumps controlled from the helm. These “Malibu Launch System” reservoirs are offered as standard equipment in the stern and mid-ships, and in the bow as an option, with the new Wakesetter 22 model.

Malibu’s patented Power Wedge automatic hydrofoil is an option aboard the MXZ.

The optional Power Wedge accessory functions as a reverse hydrofoil to direct water pressure from the boat’s forward progress to pull the stern deeper into the water to generate more wake. Offered in manual and automatic versions from Malibu, the auto system is controlled from the helm and can be set to almost any position between stowed and fully engaged to change wake size and shape while underway. When fully deployed the Power Wedge offers the equivalent of up to 1200 pounds of ballast, says the builder. 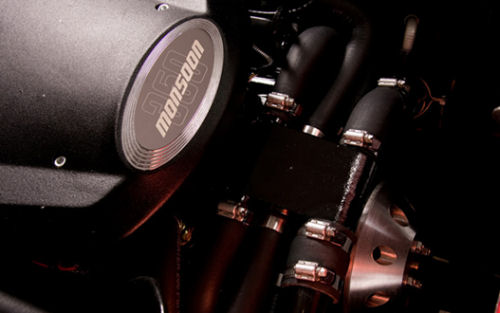 The standard 22’3” Wakesetter is powered by an inboard 350-hp Malibu Monsoon.

The Wakesetter employs a V-drive configuration to concentrate as much weight aft as possible to help generate wakes. An optional 410-hp Malibu L96 6.0L is offered as an upgrade, as are saltwater power packages that include a 330-hp model. Malibu tells us that the standard 350-hp package will allow the boat to reach speeds in the mid 40-mph range. The boat is rated to 555-hp. 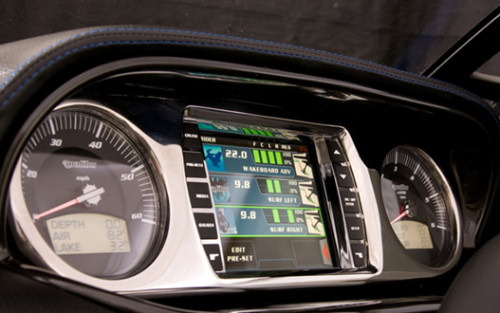 The MaliView Dash System is an option aboard the Wakesetter 22 MXZ.

Malibu’s MaliView Dash System accessory increases the size of the standard in-dash LCD to 6.5 inches and transforms the display to high-resolution color and is designed to be visible in full sun. The MaliView offers control functions with ten-button navigation, including presets that control speed, ballast levels and Power Wedge position. The dash display also offers the ability to view video on the water from a variety of sources, live or recorded. 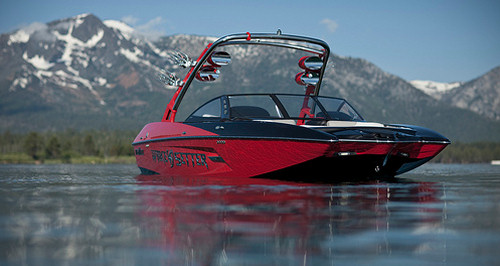 An Illusion G3 tower with a set of combination wakeboard/surf swivel racks comes standard on the new Wakesetter 22 MXZ from Malibu.

The Illusion tower features dual gas-assisted shocks for “weightless” fold-down and a variety of rack and speaker options. 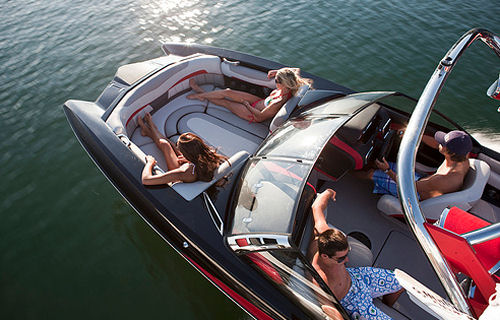 The broad, pickle-fork hull design allows the forward seating area to expand to port and starboard at the bow, creating more “elbow room” for passengers seated up front. 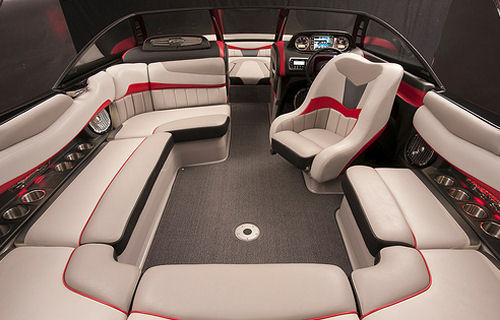 The wrap-around seating in the cockpit can comfortably accommodate seven passengers plus the skipper, while the boat has USCG-rated capacity for 15. 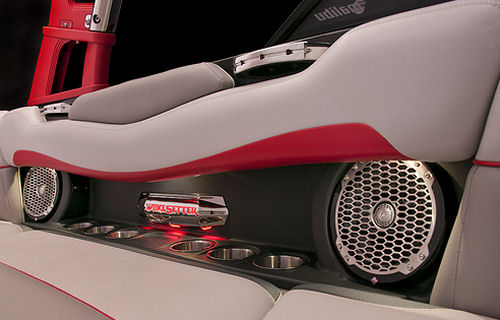 LED lighting illuminates recessed areas along each side of the cockpit that are topped with padded bolsters to provide comfortable seating. Check out the flush-mounted stainless steel grab rails in a design that is reflected in hardware throughout the boat. 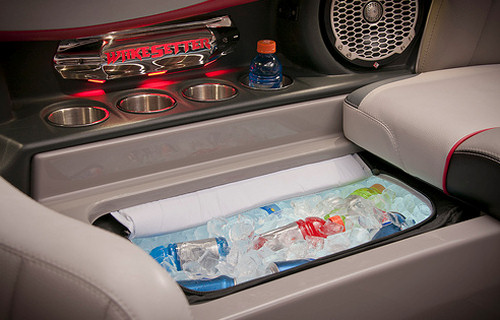 A section of the starboard cockpit seat base contains a compartment for a soft-side portable cooler. 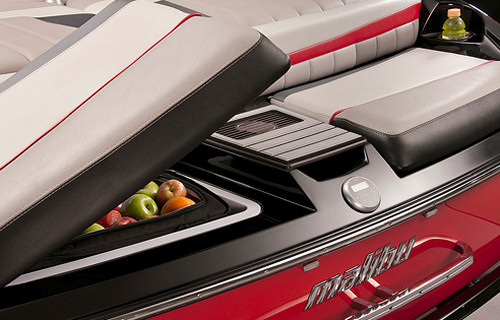 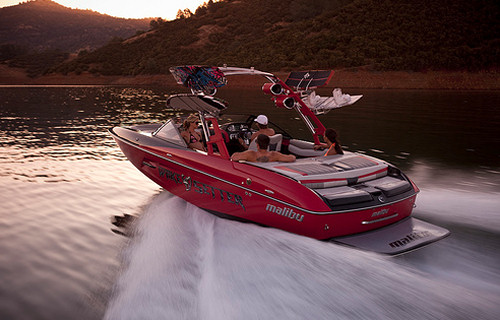 The fiberglass swim platform is mounted so low for easy access that a boarding ladder is offered as an option. Both the platform and ladder are removable. Note the top of the platform has some rocker to it to help take the pressure off wakeboard skegs.

This boat seems to offer every performance and comfort option a serious wakeboarder could ask for, aboard a boat built by a manufacturer with a reputation for providing quality ski/wakeboard boats.
This boat is not cheap, but then good products never are. The 22 MXZ is designed for hard-core wakesters who want to bring a bevy of babes along to ogle the entertainment. There is nothing subtle about this boat, and that is the general idea. The MXZ is hot and proud of it. 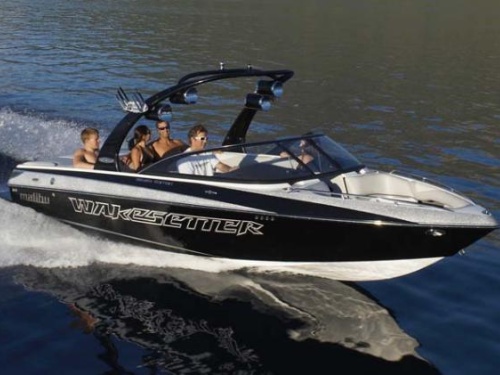 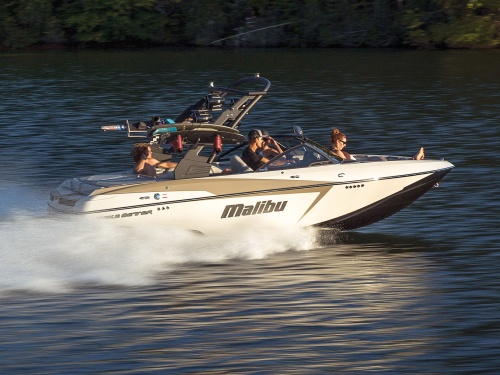 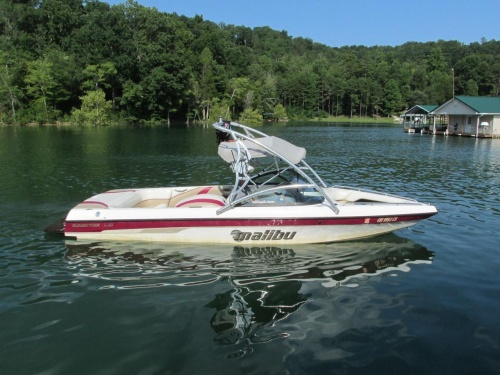 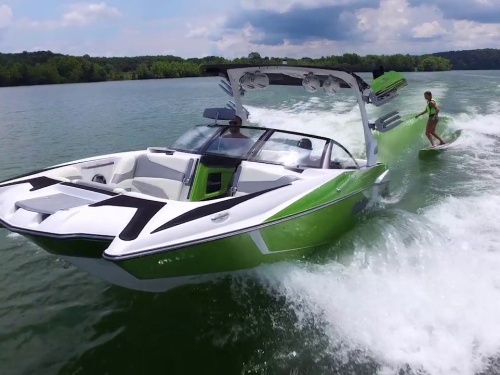