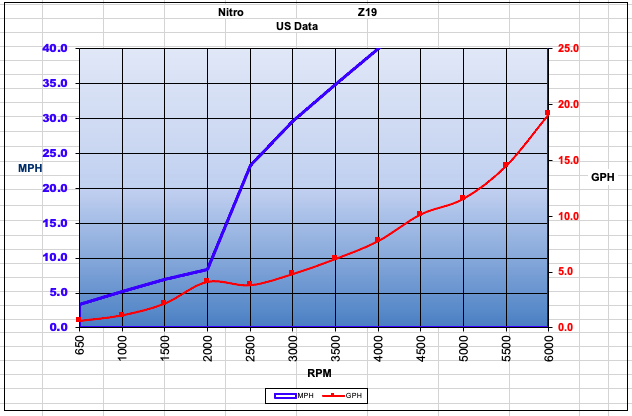 The Nitro Z19 is a pro-level fishing platform outfitted for tournaments with rod and tackle storage, plus the electronics to get on the fish and the speed to get them back to the dock for weigh-in.

With Nitro’s new NVT (Nitro Vortex Technology) and her 200-hp Mercury Pro XS engine, the Z19 hopped onto plane in an average of 2.2 seconds and passed 40 mph in 8 seconds. She is on the lighter end of bass boats, which should help anglers get into shallower areas.  We saw a little chine walk at top speeds but other than that, the Z19 handled as beautifully as we would expect from a Nitro boat.

The 200-hp Mercury Pro XS is the only choice offered for this boat.

From what we felt, this new NVT hull helped deliver the Z19’s fast hole shot, top-end speed and lift. The science says parabolic shapes are stronger than flat or angled surfaces, providing reduced resistance and truer tracking at higher speeds.

Let’s check out what will probably be the most used area of the boat, the bow casting deck. Anglers will be able to feel the comfort of the bow the minute they step on, due to Nitro adding extra anti-fatigue matting under the carpet on the casting deck. The Z19 comes standard with a Minn Kota Maxxum 24V, 70-lb. (31.75 kg) thrust trolling motor with a recessed foot pedal and a Humminbird 9 graph. There is also plenty of storage, so anglers can bring everything they need for a tournament, plus a lot more.

One major advantage of a large bow casting deck is having usable space beneath it to stow all of the gear that makes any day on the water a success. Rod lockers to port and starboard stow 8’ (2.44 m) rods. A compartment on the centerline has a divider system designed to keep Plano 3700 tackle trays organized so anglers can lay hands on what they’re looking for in a hurry. All of these lockers have molded-in drainage channels surrounding the perimeter, and reinforced lids are held open with gas-assist struts.

The cockpit of the Nitro Z19 has plenty of space and copious amounts of storage. This provides anglers with the comfort they need to spend a long day on the water and the space to bring enough with them to last that whole day.

A dedicated stowage spot for a landing net is located behind the passenger seat with a recessed section where the head will fit vertically, while the long handle will stow athwartships along the leading edge of the aft casting deck, abaft the driver’s seat. Because it is recessed to accept the diameter of the handle, a trip hazard is eliminated. A strap will hold the handle in place.

The helm and passenger Z-Core seats are designed in collaboration with champion bass fisherman Kevin VanDam. The seats include Force Flex suspension and a contoured, rotomolded frame. The center seat is optional and sits on a storage hatch.

Sealed touchpad switches are not new but they aren't common on a small boat. The waterproof, capacitive touch digital keypad is another example of how Nitro deploys technology, and that distinguishes them from the competition.

The Z19 excels where larger heavier boats can’t, such as getting into shallower waters and loitering long enough to get those last casts in before blasting off to the weigh-in.  With the Z19’s NVT hull providing the needed performance and standard amenities that are tournament ready, she will be sure to make any angler happy. 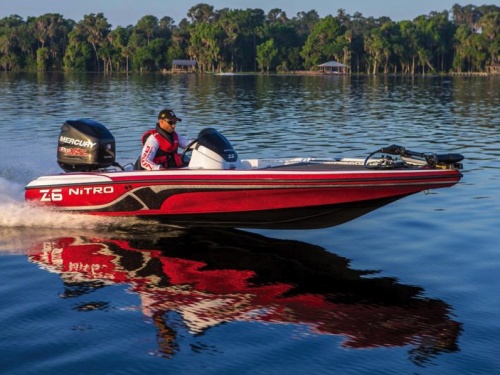 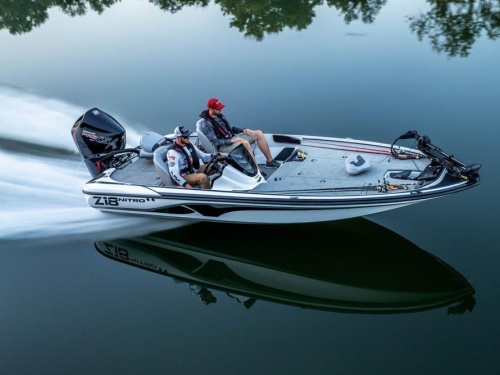 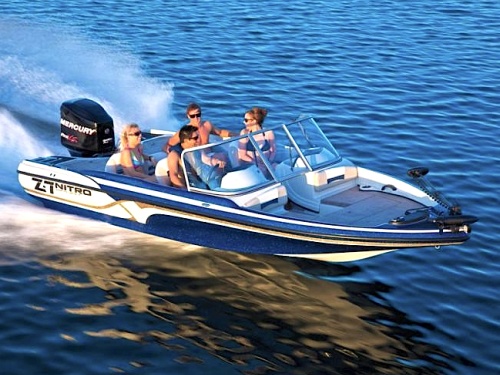 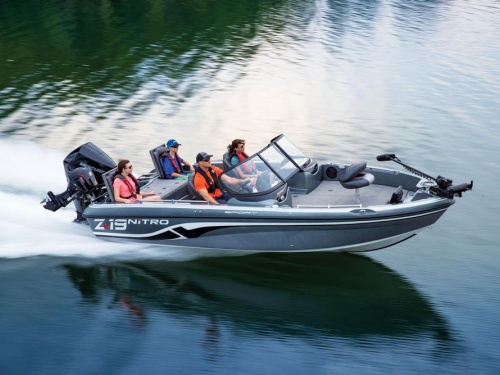 No dealers found within 100 miles.