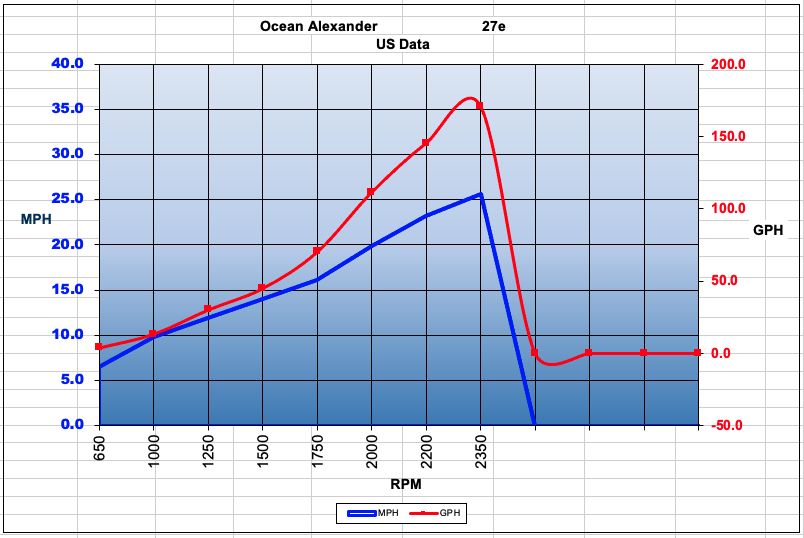 Ocean Alexander reached out to its longtime design collaborator Evan K. Marshall to draw up plans for its new line of cruising yachts, the Explorer Series.  The first of the lineup not only has the cruising legs for distant horizons, but she can also carry a multitude of water toys along with her thanks to a newly designed aft platform.  With a draft of only 4’2” (1.25 m), owners will be hard-pressed to find destinations that she cannot access.

The aft platform is one of the major highlights of this new yacht.  Not only is this aft toy storage area vast, measuring in at nearly 224.96 sq. ft. (20.9 sq. m) with the mezzanine deck, but launch and retrieval can be done with a standard portside crane or by completely submerging the entire platform.  Even with the water toys lined up, there’s still plenty of room to move about the deck.  The simple fact that this yacht is designed to carry a number of watercraft is a testament that she’s meant to explore the vast reaches of the globe and not just casually pass by.

The cockpit is accessed by a dual set of curving stairs to both sides of the aft deck.  It is here that in true OA style, a large aft-facing lounge welcomes guests to the first of many entertainment venues throughout this yacht and gives unprecedented views through the glass partition just aft.  With her symmetrical layout, wide sidedecks progress forward to an expansive forward-facing bow lounge behind a large sunpad.

If not content to settle for just relaxing in the sun, the bridge deck offers yet another exterior gathering area, only this time it includes not only an enormous forward wraparound aft-lounge but a wet bar and grill.

In the aft corners of the main deck are large stainless-steel rollers ahead of a warping winch and a bollard-style cleat. On the port side, a locker in the gunwale has the controls for the crane plus a foot pedal for the aforementioned winch. The starboard side has the same setup, except the locker houses the controls for the balcony that lowers to expand the cockpit and a wired remote for the aft submersible deck.

Guests can enter the bow gathering area from the port side and there are forward- and aft-facing lounges with a sofa just ahead of the windshield. On the forward side of the center walkway is a flat sunpad with adjustable backrests. A shade can be erected on stainless-steel stanchions.

Forward, the ground tackle is forward on a raised platform and has dual large rollers, heavy-duty bollards, foot controls for two Ultra windlasses and chain stoppers. The chain rode drops into a locker below. Anchors retract into stainless receivers and there are scuff plates below.

If the exterior didn’t convey to anyone that this yacht has a fresh and modern look, the interior will remove all doubts.  Thanks to a generous 20’7” (6.29 m) beam, the 27E takes a page from the OA Revolution Series’ success and creates an interior that is at once spacious and functional.

From the aft bridge deck, there’s a sky lounge just ahead that converts the entertainment to more climate-controlled luxury.  Opposing seating consists of an L-shaped settee across from two free-standing chairs.

Down on the main deck, the massive salon is just abaft the formal dining room for eight, both located on a single level.  Extremely large windows, perhaps better classified as glass walls, pour natural light into this main deck and the design stylings keep the luxury feel intact as we move about.

Further forward, the galley is hidden behind a door and includes separate access to the skylounge via another staircase to the port side.  An informal dining area is to port in the form of an L-shaped settee with the day head located just abaft.

Part of what keeps the interior spaces so large is the decision to put all four staterooms, including the master, on the lower deck.  Interestingly, every cabin still maintains the roominess that OA is so well known for.  While customizations abound, hull #1 features a forward VIP with a queen-sized berth mounted at an angle to the starboard bulkhead, a sitting area to port and an ensuite.  Just abaft, twin cabins, each with its own ensuite, flank the companionway leading aft to the master stateroom.

The master suite is amidships and includes a king-sized berth and another sitting area.  This stateroom also includes two ensuites so there’s no fighting for space when both owners are getting ready for an exciting day on the water.

Crew and Captain’s Quarters. The door to the crew quarters is in the port side deck. Alongside the stairs is an Octoplex touchscreen for the boat’s systems as well as monitoring screens. The crew space has a galley with a Whirlpool microwave above the sink and a two-burner Kenyon stove. A 32” (81.28 cm) TV is across from a lounge and table.

Two crewmembers sleep in over-under berths and there is a hanging locker. Aft are the side-by-side washer and dryer with a refrigerator underneath.

A watertight door in the boat deck opens to stairs that lead to the lazarette. Using open stairs in this area is smart because it provides a clear view to the steering immediately aft. The captain’s cabin is in this area with a single berth, TV and work desk.

The Engine Room. Just ahead of the captain’s cabin is the entrance to the engine room. Just inside are the main battery switches. My first impression is that there’s plenty of room to work. There’s 33” (83.83 cm) of space between the twin 1,600-hp MAN V10s and forward are the engine black boxes just above the twin fuel-water separators for each one. Overhead clearance is 6’10” (2.08 m). Abaft the port engine is the blackwater treatment system just below the tank and the power takeoff for the hydraulics is just above. Four Dometic air conditioning units are under the Delta T exhaust vent and below is one of two 32-kW generators. Ahead are the automatic firefighting system and the remote breakers for the Octoplex system. At the aft end of the starboard engine are the hydraulics for the Side-Power thrusters, the second power-takeoff and the independent motor for the Zero Speed stabilization.

Two main fuel tanks feed twin-day tanks and there are sight tubes protected in stainless-steel frames. The 27E has a fuel polishing system with manifolds and a clearly laid out schematic that the crew can easily follow.

To simplify maintenance, Ocean Alexander installs all the plumbing equipment in a separate under-deck compartment accessible via a hatch in the sole outside the guest quarters. It doesn’t have the headroom of the engine compartment, but in this area are the water heater, expansion tanks and water manifolds are all in this area.

When it came time to get underway, I used the wired remote from the aft deck to hold the 27E in position while the crew untied the lines. I liked that I could walk back and forth to get a view of both sides of the yacht as I pulled out.

The Helm. Once we were clear of the dock, I headed up to the helm, which is forward to starboard on the skylounge level and shows Evan K. Marshall’s design stylings with an elevated, adjustable panel housing three 24” (60.96 cm) displays. There are dual VHF radios, dual engine-monitoring screens and a large compass. Just behind the compass is the autopilot and alongside it are the engine controls, the thruster joysticks and the stabilizer controls with zero-speed stabilization. In keeping with the new model’s modern, contemporary looks, the steering wheel is a three-spoke stainless-steel model. Visibility is good through the double windshields and there are defrost vents.

There are two helm seats and an observer’s seat. Each is electrically controlled and has flip-up armrests, a bolster and a fold-up footrest. The captain’s seat is centrally positioned and has controls in the right armrest. To port is a desk with a good-sized workspace.

Handling. Once underway, the 27E is remarkably responsive to the helm, so she must have huge rudders to provide that low-speed response. Even in tight confines, she’s comfortable and has reassuring confidences.

At a cruise setting of 2200 rpm, she’ll take 22 seconds to come around 180 degrees. Back at the marina, he hardly used the thrusters to swing around for stern-to docking. She steers positively in reverse with one engine or the other pulling in the direction the captain wants to maneuver to.

Ocean Alexander never does anything piecemeal. This yacht has been in the gestation period for years before the first drop of hardener was mixed with resin. As such, many of the little details that haunt a new build have been worked out from the onset. With her design stylings and attitude towards exploration and long-range, this new yacht may very well set the standard for explorer yachts for the next generation. Built entirely of fiberglass, the 27E stays true to explorer yacht tradition with a shallow draft of just 4’2” (1.25 m) allowing not only access to many harbors that traditional deep draft aluminum or steel-hulled yachts would find inaccessible, but she can also cuddle up to some of the more exotic beaches around the globe. 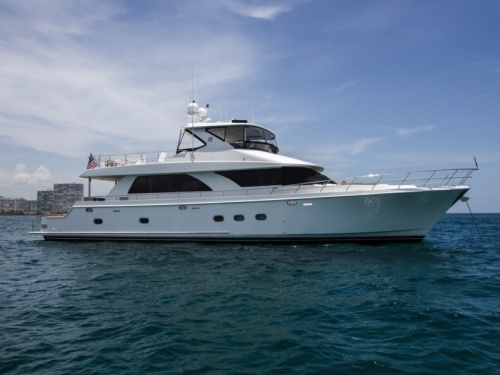 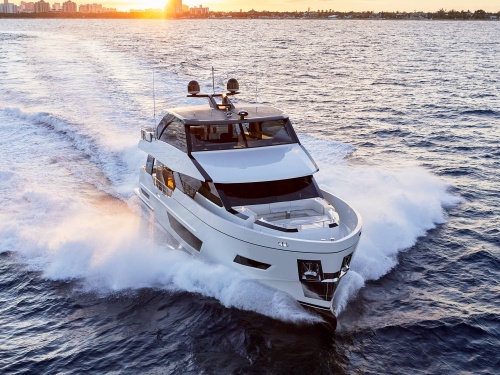 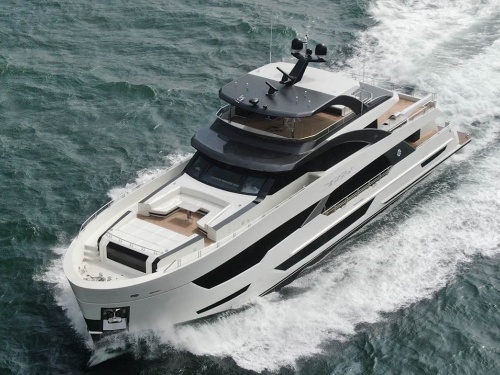